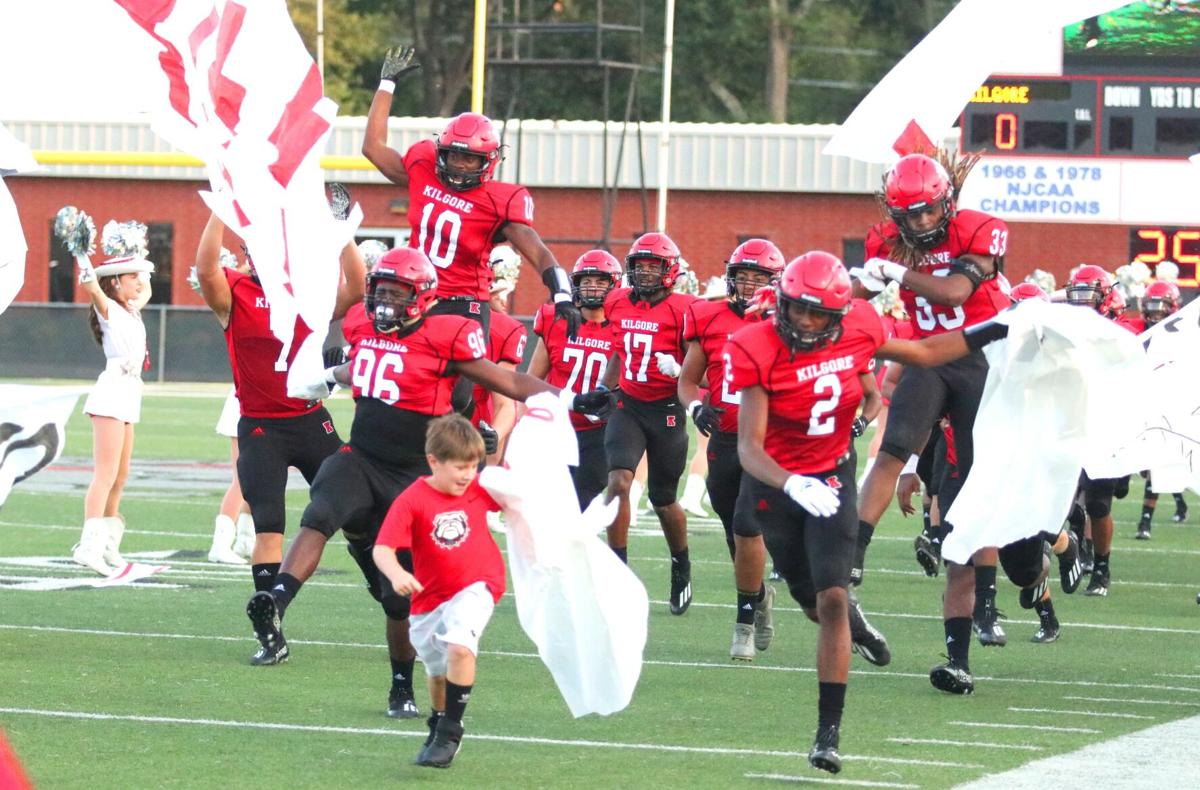 Kilgore’s Bulldogs rush the field before the very first game of the 2021 season against Nacogdoches. Kilgore finished 11-2 in the first year of coach Clint Fuller leading the Ragin’ Red, just one highlight of a busy — and fun — 2021. 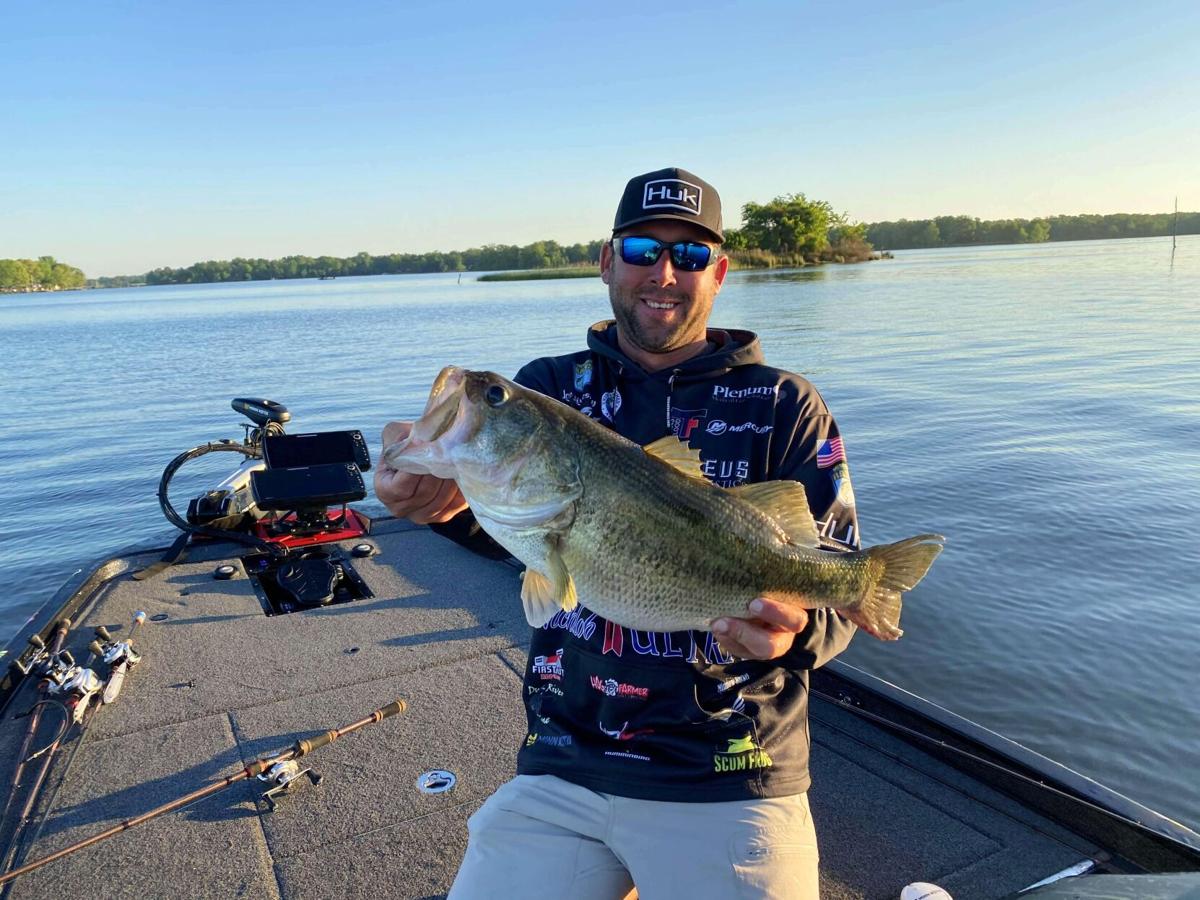 Kilgore High alumni Lee Livesay (above) was all smiles after winning the Bassmaster Elite event at Lake Fork early in 2021.

Kilgore’s Bulldogs rush the field before the very first game of the 2021 season against Nacogdoches. Kilgore finished 11-2 in the first year of coach Clint Fuller leading the Ragin’ Red, just one highlight of a busy — and fun — 2021.

Kilgore High alumni Lee Livesay (above) was all smiles after winning the Bassmaster Elite event at Lake Fork early in 2021.

The coaching retirement of Mike Wood, the arrival of new Kilgore High School head football coach Clint Fuller, a return to the men’s national basketball tournament by Kilgore College and another KHS duo reaching the state cross country meet were among the highlights of a busy sports year locally in 2021.

Wood’s retirement from the sidelines meant his top duty as athletic director was to help find his coaching replacement, and the KISD administration did that in a big way, bringing Fuller from his role as Pleasant Grove defensive coordinator back to the Kilgore community, a place he called home as a child.

“All” Fuller did in return was guide the Ragin’ Red to an 11-2 season, a District 9-4A, Division I championship, and two playoff wins, a fantastic first season for coach Fuller and the Bulldogs.

Kilgore’s only losses were a mid-season non-district setback to Pine Tree, and a playoff loss to Chapel Hill at Rose Stadium that literally could have gone either way.

On top of that, things look good for the 2022 season. The cupboard is definitely not bare, with quarterback DaMarion Van Zandt and several others back for another season.

Kilgore and Sabine basketball teams had to deal with ice and snow during the playoffs, but Kilgore’s boys made it to the second round of the playoffs in February; the Sabine girls made it into the 3A third round.

Also in March, strangely, the Kilgore College football program began their 2020 season a few months late, thanks to COVID-19. The NJCAA elected to play the ’20 season, which was supposed to start in late August, 2020, in spring 2021. KC, led by coach Willie Gooden, wound up going 8-2, and again the best in the Southwest Junior College Football Conference.

In April, Kilgore High School’s soccer teams ended their seasons much earlier than usual, out before either team could reach the UIL Class 4A regional tournaments. Kilgore still had great seasons, though, dominating in District 15-4A competition, and in all-district honors.

Kilgore College’s men’s basketball team won the Region XIV Conference tournament and made it to the NJCAA national tournament in Hutchinson, Kan., for the second time under coach Brian Hoberecht. The Rangers are continuing their success in the current season: they’re ranked number two in the nation at this writing. The Rangers finished the 2020-21 season with an 18-6 record, which included a loss to home-team Hutchinson Community College in the first round of the tournament.

Near the end of April, Lee Livesay, a former Kilgore football standout and now a professional fisherman on the Bassmaster circuit, won the Guaranteed Rate Bassmaster Elite Series title at Lake Fork, totaling 112 pounds, five ounces on arguably the circuit’s most competitive stop.

Kilgore College’s softball team, under the guidance of then first-year head coach Trish Robinson, qualified for the Region XIV Conference softball tournament, a double-elimination event at the University of Texas at Tyler.

West Rusk softball darn near made the UIL Class 3A state tournament, losing in the fourth round to Grandview.

In June, Fuller was named Kilgore’s new head football coach, coming over from Pleasant Grove after a long career as an assistant coach and all of them successful stops.

And then it was fall sports: football, volleyball, tennis and cross country.

Kilgore’s 2021 season was chronicled briefly earlier, but a district championship, a 35-34 unforgettable win over rival Henderson, and an 11-win season was an excellent first campaign for Fuller.

West Rusk football went unbeaten in District 9-3A, Division II, and lost in the third round of the playoffs.

Sabine’s football program got hot after two early losses to West Rusk and Daingerfield, and went on to finish second in their district only to Gladewater.

Kilgore volleyball, with a young lineup, missed the playoffs.

Kilgore cross country had great team success, and then sent two – Ryan May and Ruby Almanza – to the UIL State Cross Country meet at Round Rock.

Kilgore College men’s basketball has started the 2021-22 season 14-0, and 4-0 in conference play at the holiday break. Coach Hoberecht’s Rangers are ranked second in the nation to Salt Lake (Utah). The KC Lady Rangers are 9-2, 2-0 in conference play, and both resume play soon: the Lady Rangers at LSU-Eunice in a mini-tournament on Thursday and Friday, and the Rangers back in action at Jacksonville College on Monday.