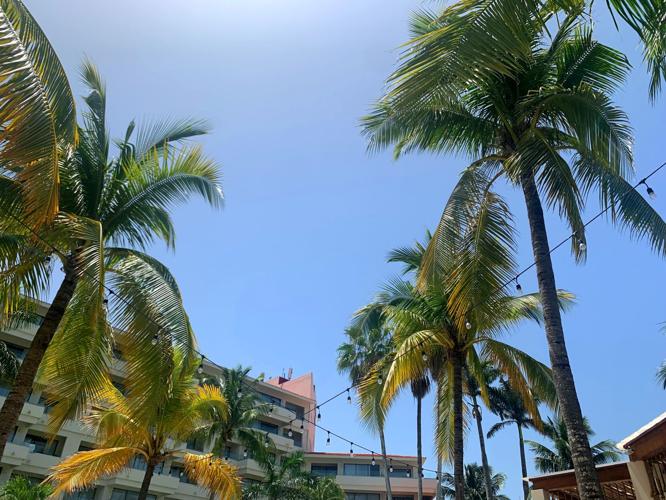 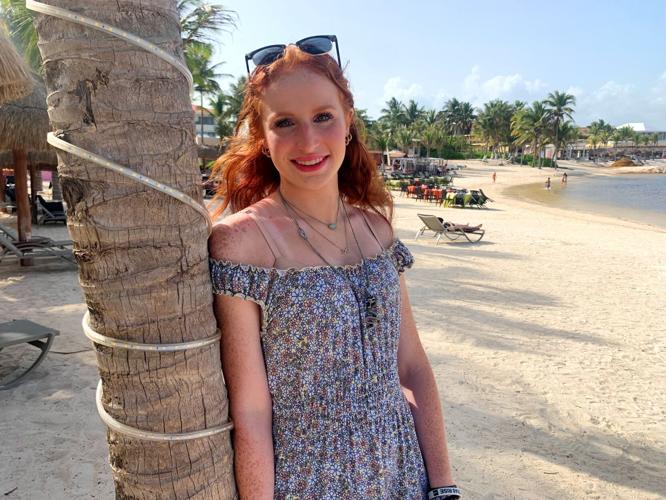 Presenting Mr. and Mrs. Sam Engel. In the background, between Sam and Jennifer is Kris Thompson, Jennifer's mom (center, seated, in green).

Presenting Mr. and Mrs. Sam Engel. In the background, between Sam and Jennifer is Kris Thompson, Jennifer's mom (center, seated, in green).

EDITOR’S NOTE: Sports editor Mitch Lucas and family are attending the wedding of his daughter, Teresa Leigh, and her fiancé, Nate Gurany, as well as his niece, Jennifer Thompson, and her fiancé, Sam Engel. This is the second of a series this week that finds them traveling for the weddings.

OK, this is our second day, and we’re very much in Cancun, Mexico.

-Day two begins with a call from my beautiful daughter Teresa Leigh, our bride-to-be. She’s at one resort, remember, and her cousin, Jennifer, is at another; we’re at the resort with Jen, because her wedding is first. Tee and Nate’s wedding is in a few days. Tee is phoning me to tell me they’ll see me later today for Jen’s wedding. They’re greeting guests, including my mom, Teresa, her husband Verlin, my sister, Jennifer (names will get redundant here, pay attention, you people), and her sons, Tyler and Spencer.

Tyler is like 6-foot-3, and a scout’s dream. He and my son Jacob together are killer on the eyes. Jacob is a dark-haired nice-looking guy and a 21-year-old college student. Tyler is just a little younger, 19 or so, and blond-haired, like his mom, and also a college student. They’re both head-turners. And they’re both great kids. I’m proud of them both.

Now, Spencer – Spencer is a pistol. Spencer is a pistol wrapped in a stick of dynamite, like one of those Super Balls you got out of those machines when you were a kid, and you threw against the wall and they bounced all over the place: you never knew where they were going to go. That’s Spencer. He is a ball of energy. We're all jealous of him for it. But we love him.

They landed in Cancun on Saturday, the morning of Jennifer and Sam’s wedding.

-A bit of an ailment: So, I was a little sore after traveling Friday, and had to take Motrin. LOTS of Motrin. I’ll go so far as to say “copious” amounts of Motrin.

Ever notice someone only takes “copious” amounts of something when it’s illicit or bad?

You get the idea.

I decided my rather large party – which expanded from our 11 people on our first day to include 49 others (the entire wedding party for Jen and Sam, who were at the first resort for their Saturday wedding) to a full-blown 60 – had other things to do that didn’t necessarily have to involve Mitch.

So I thought I would take this opportunity to explore the resort a little bit, i.e., look around, walk around, not eat (better shape for these weddings and for an upcoming football season, remember) and go hang out at one of the 250,000 pools at this place.

I got a late start, but I finally leave the room mid-morning, and everyone else has fanned out. I feel fairly sure we looked like a combination East Texas-Minnesota S.W.A.T. team, although I was a solo. I go to the “family” pool area. EVERY. SINGLE. CHAIR. IS. TAKEN. All of them.

I gravitate to the 18-and-up pool area. There is nobody in the water. I kid you not. Not a soul. Nobody. They’re all on chairs, but there are chairs here.

I find an isolated area, where I appear to be alone, pick a chair, sit back in it, set a timer for a few minutes that I think I can get away with before anyone will need me to come do anything, and I put my head back. I remember I have no art for this column (a photo for you guys to look at), so I snap a photo straight up in the air, like my viewpoint, and set the phone back down.

I’m drifting off, and what happens?

Well, what would happen to YOU if you were in this story?

ASHTYN: Beach. I’m at the beach.

Oh, yeah. I remember. Before I walked down poolside, I had asked Ashtyn where she and her cousins were. They were at the beach near the pool.

I put the phone back down. I put the head back. I set everything else back. Maybe five, six minutes go by.

I get up, turn off the timer. I put my T-shirt back on, toss the pool towel into the right hamper, go back to the family pool, mug some old lady for her chair and shove her in the water – not really! Wanted to see if you were paying attention. Someone had moved. I put my things on a chair, climbed into the water and a game of volleyball kicked up.

-Covering sports on vacation. I have covered an awful lot of sports in my career. That is the biggest understatement I’ve ever made. I don’t think I can name them all. I don’t know that I can try.

There are the obvious mainstream sports. But on Saturday, I did something I’ve never done.

I tried to keep score while half-clothed, soaking wet, sitting in a double-Olympic-sized pool watching teens-and-20-somethings play competitive volleyball wearing someone else’s sunglasses from a distance of, oh, 75 or 80 feet.

In the middle of a freeze tag game between 4-and-5 year-olds, swinging plastic shovels meant for sandcastle-making and not pool-swimming.

And getting floatie-marks on my face.

I will say, it makes for quite a challenge.

Well, the personal space rule was getting broken out to ying-yang in the pool on Saturday, and ol’ Uncle Mitch was getting pasted by babies. I was nice, though. I could have been mean. I wanted to tell these kids about Batman’s one rule that he didn’t break: you know. KILLING PEOPLE.

But I decided to be a nice Uncle Mitch. And let them have their space – and mine – and continue to watch pool volleyball.

Finally, after what seemed like a game that went all of eternity, I looked on as a celebration ensued as Jacob, Ashtyn, and cousins Benjamin and Madisyn and their team won the volleyball game. We fought our way out of the pool, and managed to keep our lunch date with Kris and Chris (the parents of Jennifer and soon-to-be in-laws of Sam).

Kris (as in Kristina) is Jennifer’s mom, a sweet lady, and Chris, Jennifer’s dad, is a great guy – Ok, I won’t stretch it. No, he is. He fashions himself as a stand-up comedian, and he’s just about right. I don’t know if Chris has ever been to London, but I really do believe if Chris ever tried to make the Yeomen Warders laugh, those freaking guys would fall over. They will have met their match. And the only reason they haven’t laughed in public is because they haven’t met Chris Thompson.

We sat at the poolside grill – a big party of us – with Chris holding court for two hours, and it never got old. If he was nervous because his daughter was getting married, you would never, ever have known it. And the people who were waiting tables were so nice to put up with us. Our food was slow, yes, but we got our food, ate, and we stayed, and Chris was keeping everybody laughing. That’s just Chris. He’s never met anyone he couldn’t make laugh. Everybody knows someone like that.

His best line could’ve been taken as an insult to one of the servers, but he didn’t mean it that way, and it went completely over the young man’s head. He was actually complimenting the food.

“You guys have got some great microwaves back there,” Chris told the guy, in his transplanted Texas-to-Minnesota accent. Kris just covered her mouth and face, and Jacob was flat-out laughing. “They must be like 1200 watts.”

The server never got the humor. He nodded and barely smiled “Si,” he said, and Chris told him thanks for a great job as we left.

-Jen and Sam get married. So, Jennifer and Sam had a fairly large wedding party, with the bridesmaids wearing peach and there were a lot of them. Sam kept it simple, wearing white, not a tuxedo, just a simple beach outfit, and Jennifer – well, you can see her bridal dress in the photo.

Their vows were sweet and eloquent – and both added an element of humor, as well. There is some irony in that Jennifer and my daughter, Teresa, who are first cousins, are both marrying high school teachers/ coaches, and both Sam and Nate appear to be very quiet, but confident and great young men.

They finished their vows and when it was time to say, “I do,” it was less than clear.

Both of them had to repeat their “I dos,” and both did so emphatically when they repeated. “I do!” they both said, as it seemed everybody laughed.

-Photos, the aftermath, the dinner, and then the dancing. After all the traditional activities – the wedding dinner, the cake, daddy-daughter dance, the toasting (and Chris even gave a nice toast and behaved himself with a microphone; I was proud and somewhat shocked) – came the dancing.

And yes, I was a spectator for the dancing. My children are all gifted dancers, all of them: Teresa, who was a Kilgore High School Hi-Stepper; Jacob, who is just athletic as heck; and Ashtyn, same, but a current Hi-Stepper and volleyball player, and just a natural dancer.

I do understand my moment is coming for a daddy-daughter dance Tuesday. We’ll just have to see how that turns out.

The highlight of the night: either Sam and Jacob doing a brief Michael Jackson dance-off in “Beat It,” or Sam closing things out (before the dancefloor moved off the rooftop) with a performance of “All Star,” by Smash Mouth.

Somebody once told me the world is gonna roll me;

I ain't the sharpest tool in the shed…

I’m older than that song, but sometimes I contemplate a lawsuit when I hear it…