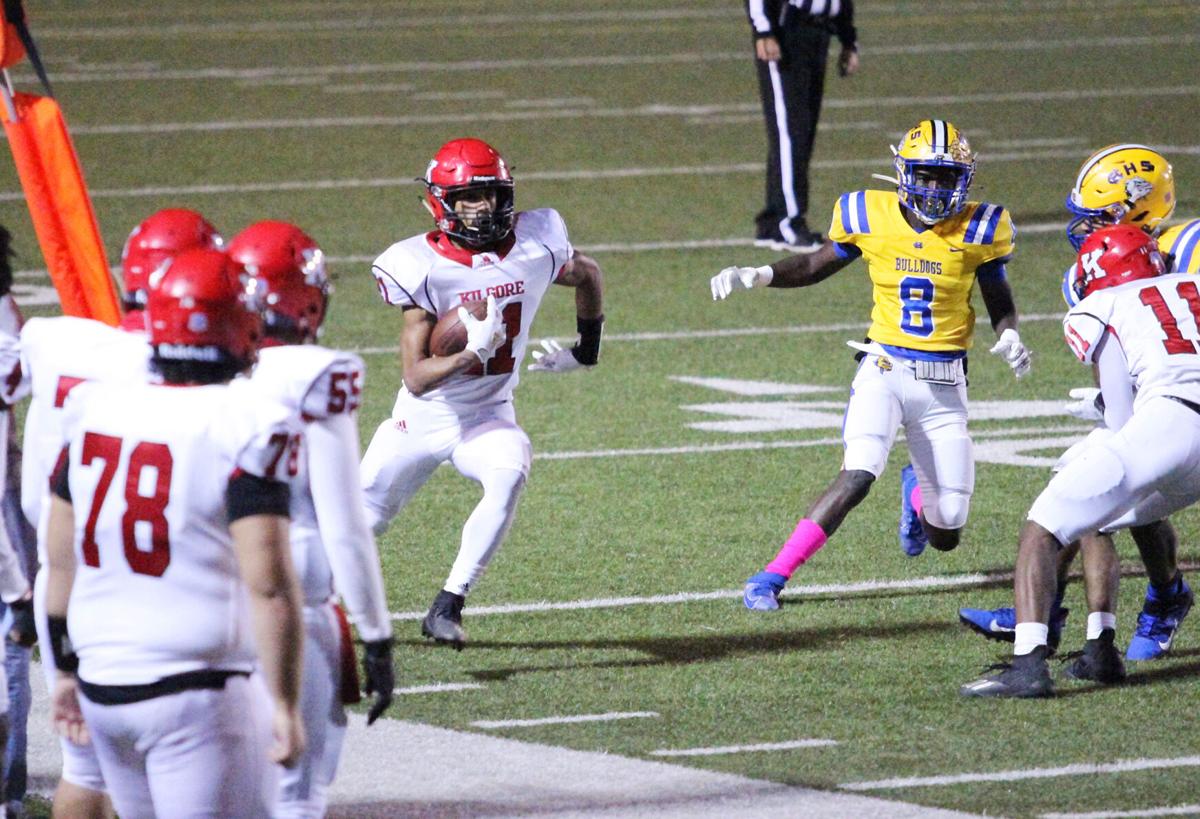 Kilgore running back Tray Epps (21) set a new school record for touchdowns in a single game with six, and a new record for rushing yards in a game — 400 — in a 45-38 wild win over Chapel Hill. Kilgore (5-2) hosts Henderson next Friday night. 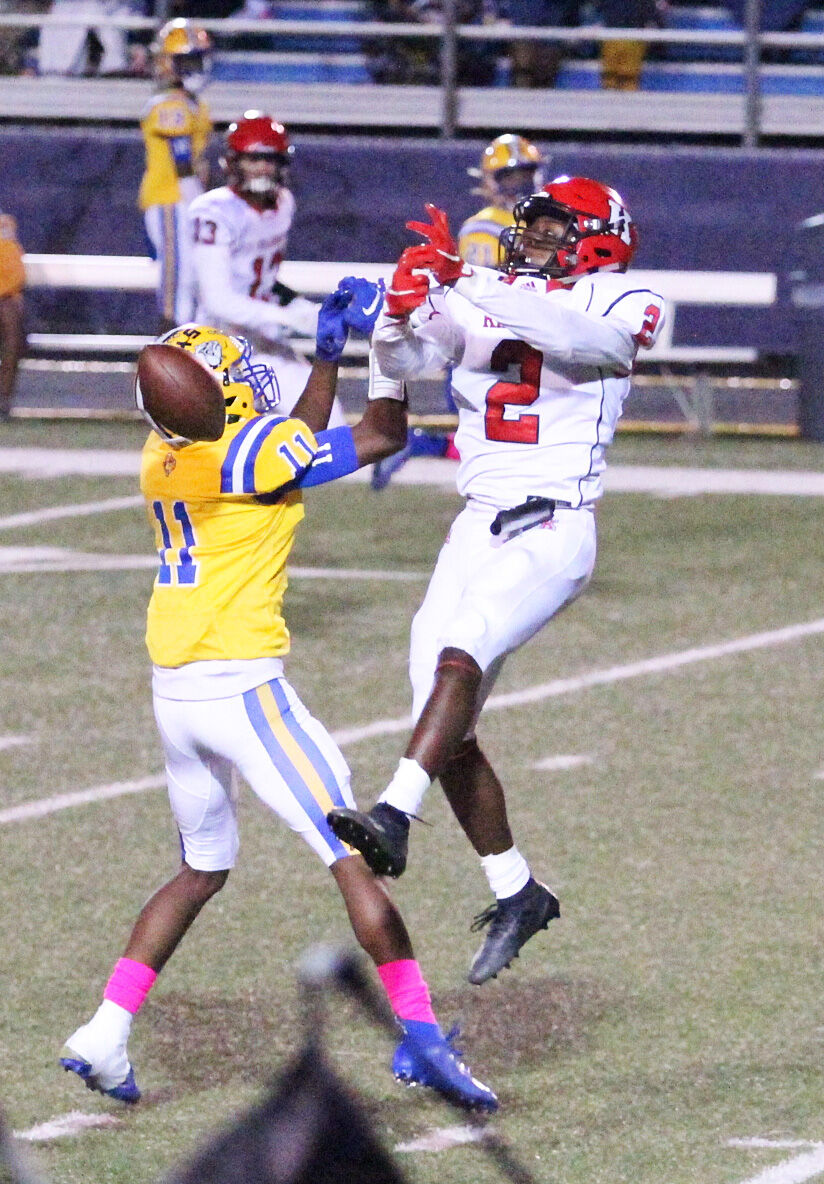 Kilgore defensive back Donovan Adkins (2) knocks away a pass meant for a Chapel Hill receiver. The two teams combined for over 1,000 yards in the 45-38 Kilgore victory.

Kilgore running back Tray Epps (21) set a new school record for touchdowns in a single game with six, and a new record for rushing yards in a game — 400 — in a 45-38 wild win over Chapel Hill. Kilgore (5-2) hosts Henderson next Friday night.

Kilgore defensive back Donovan Adkins (2) knocks away a pass meant for a Chapel Hill receiver. The two teams combined for over 1,000 yards in the 45-38 Kilgore victory.

CHAPEL HILL – This District 9-4A, Division I game had about everything: back and forth, a record-setting performance by a Kilgore player, a dramatic rally by Chapel Hill, and a hold-on-for-dear-life performance by Kilgore’s defense late in the game.

And then ultimately, a Kilgore win in this battle of the Bulldogs gone wild.

Kilgore running back Tray Epps scored six times – a new KHS single-game record for touchdowns – and also set the new school single-game rushing yards record with 400 yards in a 45-38 game that might have been much closer than it should have.

The victory gives Kilgore a 5-2 overall record, but more importantly, the Bulldogs are 3-0 in district play, with three games left: at home against Henderson next Friday night; at Athens on Oct. 30; and at home against Lindale on Nov. 6, in the regular season finale.

Kilgore led 28-7 at the half, but Chapel Hill came roaring back, with Tyson Berry scoring his second touchdown of the night with about 8 ½ minutes left in the third quarter. Kilgore got the ball back leading 28-14, but a fumble led directly to a score: Chapel Hill’s Max Richardson scoops it up and raced it in from 53 yards out. Chapel Hill in a matter of seconds got within one score.

This would continue throughout the second half.

Kilgore added a 33-yard field goal by Chris Baldazo to extend its lead to 31-21 – Chapel Hill never actually got in front, but made Kilgore sweat on a chilly night. Epps broke free from the Chapel Hill defense to stretch the lead to 38-21, with 10:12 left, and that looked to be it.

The Chapel Hill version of the Bulldogs just wouldn’t go away. Jada Adams returned the ensuing kickoff for a score, making it 38-28 and staying within 10 points, and then recoverd an onside kick. Dalton Smith intercepted the ball for KHS on the first-down play, but Kilgore couldn’t get points out of the turnover.

Chapel Hill made it 38-35 Kilgore with 5:08 left in the game on a 33-yard touchdown pass from Cameron Ford to Alonzo McGregor, who kept making play after play, and then on the next Kilgore drive, Epps showed up yet AGAIN, his sixth and record-breaking touchdown of the night, to make it 45-35.

Chapel Hill did add a 31-yard field goal late, with less than a minute left, but couldn’t recover the onside kick and Kilgore was able to run out the remainder of the clock.

Kilgore’s first two drives of the game ended with points – all courtesy of Epps runs – and a third before the end of the first quarter gave the Bulldogs in red a 21-0 lead (runs of 20, 33 and 29 yards, respectively).

KHS would get one more first-half touchdown, and it would be – who else? – Epps, on a 51-yard run.

Anthony, who died earlier this year, still holds the record for rushing yards in a football career at KHS, having ran for 3,766 yards from 2009 through 2011.