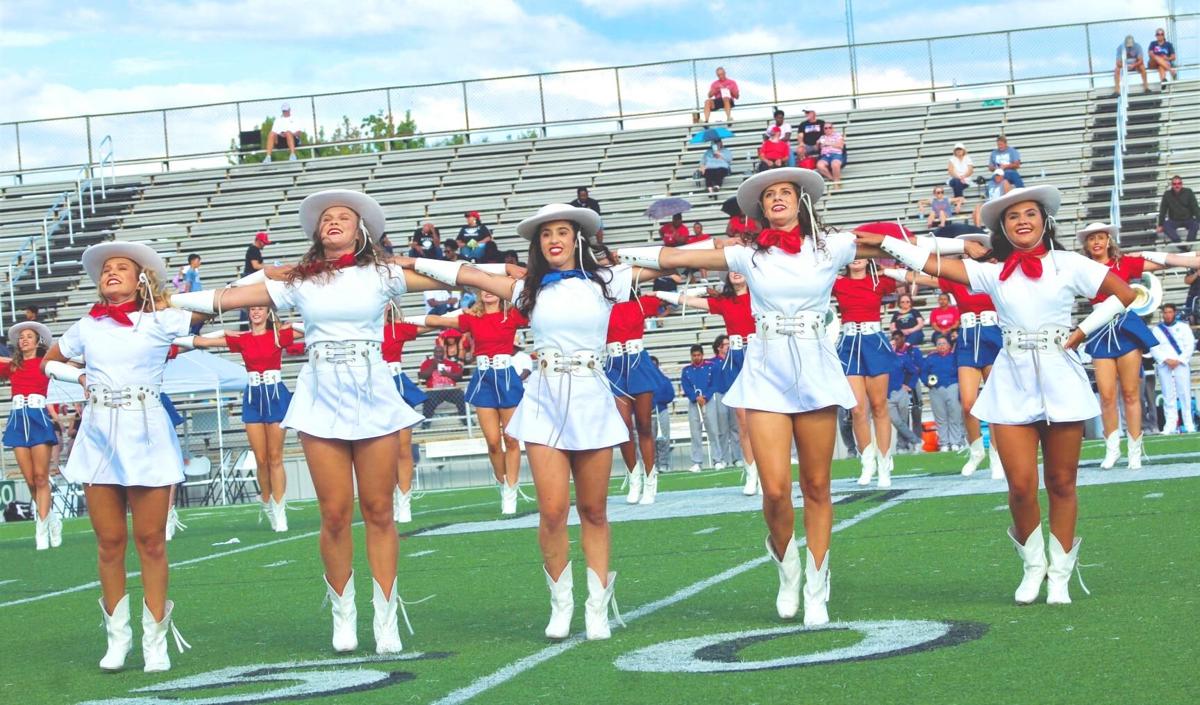 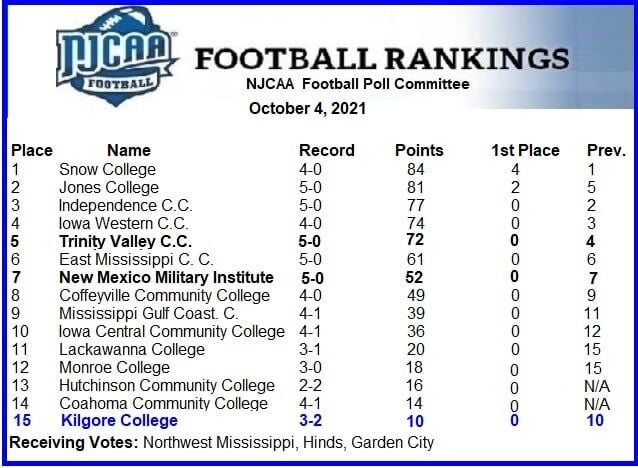 Kilgore College’s chances of reaching the NJCAA’s new four-team playoff for the national championship just took a gut-punch with the loss to Navarro on Saturday, the Rangers’ second straight loss.

But it wasn’t a knockout punch.

The defeat dropped the Rangers from number 10 in the nation to number 15, the final spot on the NJCAA poll released each Monday.

KC has a favorable schedule to work itself back up.

The Rangers are 3-2 overall, and have more of an opportunity than most to move up. Remember: they don’t have to be one of the two top teams. The chances of that this season now are slim to none after two defeats, and slim looks to have taken the bus.

But a top-four finish? Not out of the question.

Here’s KC’s remaining schedule: at Cisco this week, then an open date; at home against number one Snow College on Oct. 23; at home against number five Trinity Valley on Oct. 30; and at home against Tyler on Nov. 6. After this week, all of KC’s regular season games are at home. If they get into the Southwest Junior College Football Conference’s playoffs (the top four teams, which they should, if they win those games), they’ll have a first-round playoff game Nov. 13.

The conference title game is Nov. 20.

No NJCAA committee is going to bypass a KC team that wins out, including upsetting the number one team in the nation, and wins its conference title. If KC wins out – from this point – the Rangers are almost certainly guaranteed to have played number seven New Mexico and/or Navarro, their two losses, in the conference playoffs with a chance to avenge those losses.

In a world where KC wins out, with a conference title, it’s likely KC would get at least that fourth-in-the-nation ranking, which would get them into the top-four national championship mini-tournament.

No one was thinking about that Saturday, though.

From the words of Jack Stallard, who covered the game for M. Roberts Media…

“Navarro scored 34 straight points in the second half, rallying from 18 points down on a couple of occasions and holding on for a 47-43 win over the No. 10-ranked Kilgore College Rangers in Southwest Junior College Football Conference action.

Kilgore College built a 28-10 lead later in the first half and led 28-13 at halftime. The Rangers scored early in the third to again go on top by 18 (35-13), but the Bulldogs stormed back to go in front 47-35 with 5:25 to play. KC scored and converted for two points with 3.9 seconds left, but an unsuccessful onside kick allowed the visitors to kneel out the clock.

The teams combined for 1,209 total yards and 90 points. The Rangers had 329 yards rushing and passing, while Navarro finished with 179 yards on the ground and 372 yards through the air.

Kilgore College’s Clifton McDowell carried 16 times for 198 yards and four touchdowns and completed 21 of 38 passes for 329 yards and a couple of scores. Marques Pearson caught 10 passes for 175 yards and two touchdowns.”

McDowell did a fine job, but Malcolm Mays is expected back in the line-up this week at Cisco, coach Willie Gooden noted.