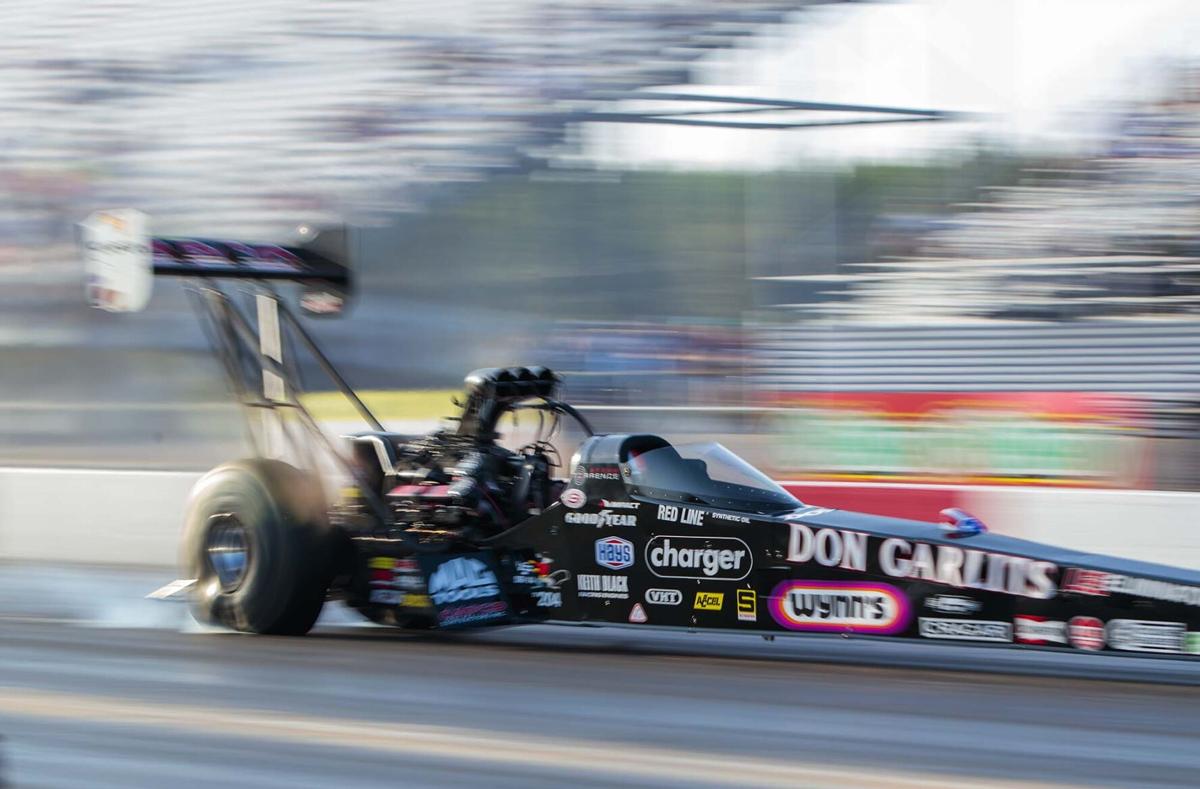 Photo by Mark Rebilas Kilgore’s Steve Torrence drove a modern day facsimile of Don Garlits’ Swamp Rat 14 dragster into the winners’ circle Sunday in the 51st annual NHRA Gatornationals at Gainesville, Fla. Torrence beat his dad, Billy, in the Top Fuel final to win for the first time in Florida. 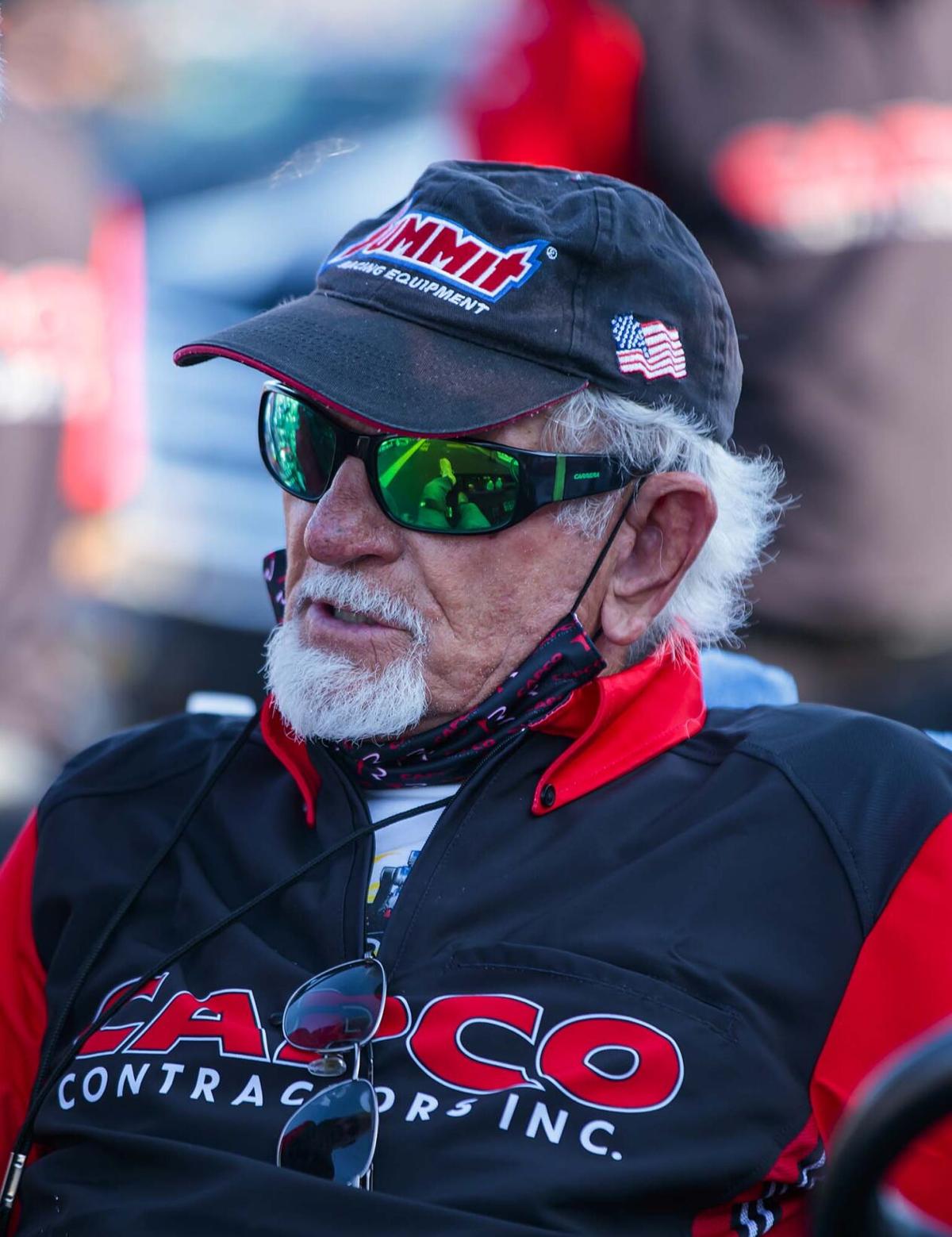 Photo by Mark Rebilas Kilgore’s Steve Torrence drove a modern day facsimile of Don Garlits’ Swamp Rat 14 dragster into the winners’ circle Sunday in the 51st annual NHRA Gatornationals at Gainesville, Fla. Torrence beat his dad, Billy, in the Top Fuel final to win for the first time in Florida.

Driving a modern day version of “Swamp Rat 14,” the Garlits-designed rear-engine dragster that revolutionized the sport upon its debut in 1971, Kilgore’s Torrence ended a career of racing disappointment in Florida with a heart-stopping victory in an all-Capco final round with his dad, Billy.

As has become the rule when father and son meet, this one was another classic. The younger Torrence won in 3.809 seconds, a tick quicker than his dad (3.810) who had outqualified him for the first time this year. Steve now has won two of the three final rounds between the two, gaining the advantage on the same track on which Conrad and Scott Kalitta in 1994 became the first father and son to reach an NHRA Top Fuel final.

His 39th tour victory propelled the 37-year-old Torrence into the points lead for the first time all season. When qualifying begins Saturday in the 23rd AAA Insurance Midwest Nationals at St. Louis, he will lead Doug Kalitta by 22 points and Leah Pruett by 33. Billy Torrence is fourth with four races remaining.

Until Sunday, Gainesville had been the only track in the Mello Yello series on which Torrence had a losing record. He corrected that shortcoming with a semifinal conquest of Leah Pruett that was payback for her hole shot win in the same round at the Labor Day U.S. Nationals. In that race, Torrence had an .037 of a second reaction time; Pruett an .038.

With Sunday’s victory, Team Torrence now has won exactly half the NHRA races contested over the last 41 months beginning with Steve’s win in the 4Wide at Charlotte, N.C., on April 30, 2017, That’s an amazing 37 wins in 74 events including this year’s Winternationals at Pomona, Calif., in which neither Torrence participated.

Now, Torrence is a step closer to his goal of becoming just the third driver in history to win three consecutive NHRA Top Fuel championships. It’s something not even Garlits accomplished in a career that led to his being voted the No. 1 driver in the NHRA’s first 50 years.

Ironically, as dominant as was “Swamp Rat 14” upon its debut, it didn’t carry Garlits to victory at the 1971 Gatornationals, a race ultimately won by Jimmy King after “Big Daddy” lost in the second round to eventual runner-up Sarge Arciero.

The Garlits’ “tribute car” in which Torrence won on Sunday, a car that now will go into the Don Garlits Museum of Drag Racing in nearby Ocala, was created to celebrate Garlits’ storied career including his rivalry with the late Charlie “the King” Hogan, father of Torrence crew chief Richard Hogan, whom Garlits mentored early in his career and with whom he still remains very close.

“Don, I just want to say thanks for giving us an opportunity to run your car and to just celebrate the greatness of Don Garlits,” Torrence gushed after winning his third race of the season. “I never won here at Gainesville before, never even been to a final. But today, we had magic. We were racing ‘Big Daddy’s’ car and we got a win for ol’ Dom (a reference to friend and Capco crewman Dom Lagana who remains hospitalized with injuries suffered last month in a traffic accident.)”

The next action for both Torrences, and the NHRA, will be the AAA Insurance Midwest Nationals this weekend at World Wide Technology Raceway in St. Louis.