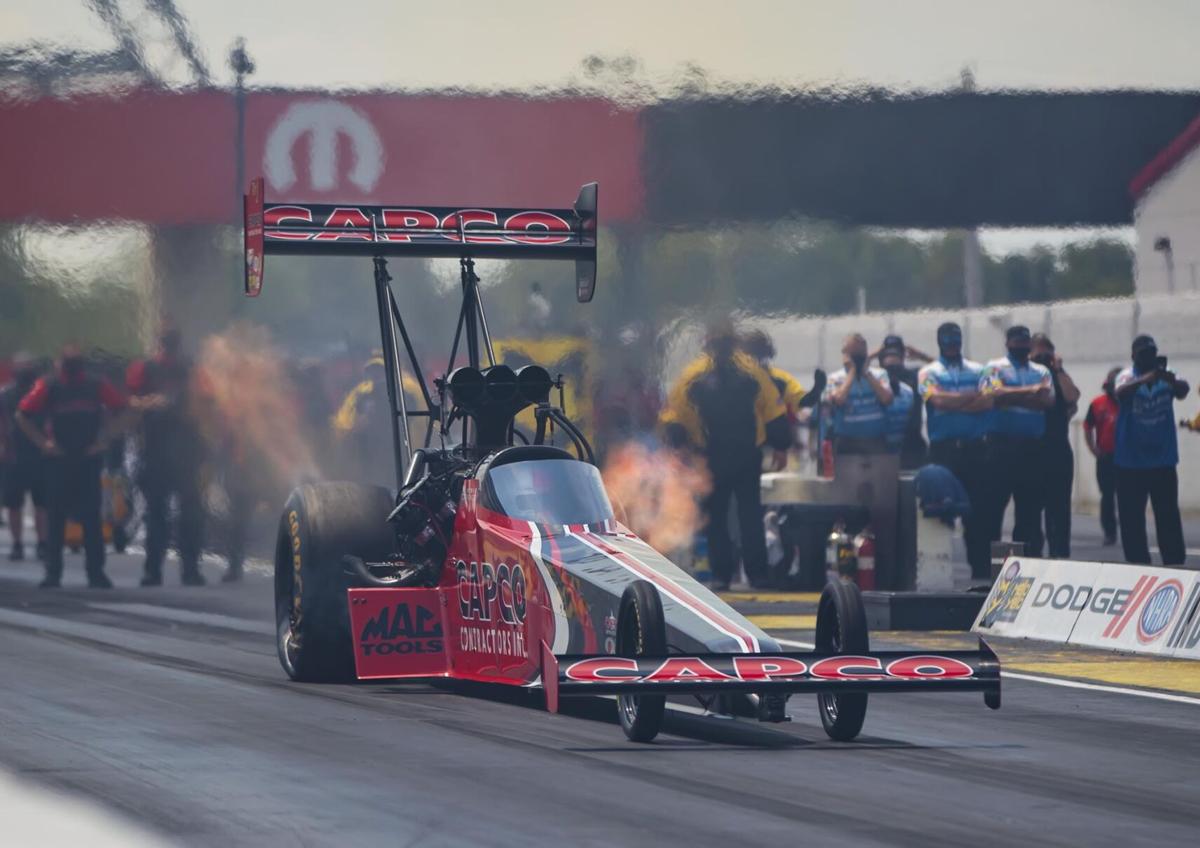 Steve Torrence from here in Kilgore (above, in the CAPCO Contractors car, and inset, holding the championship trophy) won his third straight NHRA Camping World Top Fuel championship over the weekend, joining only two drivers in the history of the sport to win the coveted crown at least three straight years. 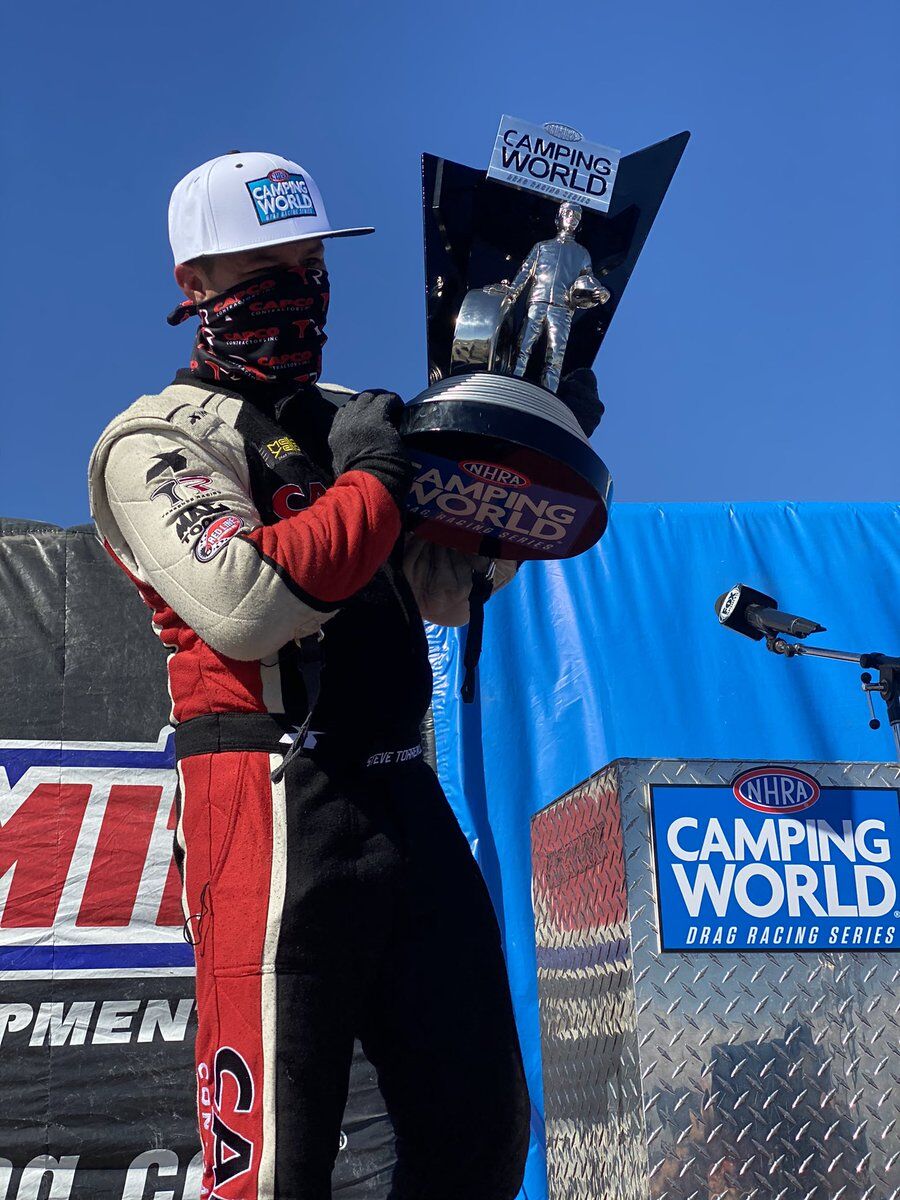 Steve Torrence from here in Kilgore (above, in the CAPCO Contractors car, and inset, holding the championship trophy) won his third straight NHRA Camping World Top Fuel championship over the weekend, joining only two drivers in the history of the sport to win the coveted crown at least three straight years.

LAS VEGAS – Kilgore’s Steve Torrence did what was necessary Sunday at The Strip at Las Vegas Motor Speedway, and made history.

Torrence NHRA Top Fuel rival Doug Kalitta lost to rookie of the year Justin Ashley, and while Torrence fell just short of winning in Vegas, he did become just the third NHRA Top Fuel driver in the history of the sport to earn three straight championships.

Joe Amato pulled off the feat, winning three straight from 1990-92, and then legendary Tony Schumacher did it, as well, beginning in 2004.

The 37-year-old Texan has had a big year, getting married to Natalie Jahnke, finding out he’ll soon be a father next year, and of course, his career, driving that CAPCO Contractors dragster. While he didn’t win for the 41st time, he did get to the finals, and celebrated that third straight Top Fuel title with family and crew. The group were sure to give shout-outs to injured teammate Dom Lagana, who texted congratulations from his hospital bed in Indianapolis.

Torrence clinched the very first Camping World championship in somewhat anticlimactic fashion when his principal rival for the title, veteran Kalitta, lost a heartbreaking first round race to Ashley.

That rendered moot the myriad other possible title scenarios and made Torrence just the third driver in NHRA history (after Amato and Schumacher) to win as many as three consecutive championships in the sport’s signature category.

Nevertheless, this was an emotional milestone for the only driver ever to sweep the six races in the NHRA’s Countdown to the Championship, the playoff system that, ironically, was waived this season because of the COVID-19 pandemic.

“The amount of time that he’s spent out here, to come up short, not just one time, but so many times, it’s a mixed emotion for me,” he said. “I know where his head’s at right now. I know how he feels. I’m happy for my team and myself, but I was saddened for Doug and that whole Mac Tools team. They fought so hard. They had a great car.”

Congratulated at the end of the racetrack after winning his first round race against fellow Texan Kebin Kinsley, Torrence was told that the TV crew had received a text message from Lagana, a revelation that promptly re-ignited a roller coaster of emotions for the 40-time pro tour winner.

Lagana was injured in a car crash in Brownsburg, Ind., following a Torrence victory last August in the Dodge Indy Nationals. The accident and aftermath were difficult for the entire Capco team, but Torrence hit an personal low two weeks later when, while he was trying “to win one for Dom,” lost in the semifinals of the sport’s biggest single event, the Labor Day U.S. Nationals.

“These (Capco boys) spend countless hours and days and weeks working on this race car and then they give it to me with the hopes that I’m going to go do my job,” Torrence said. “(The Nationals), after Dom’s accident, was extremely difficult. I never found myself in an emotionally motivated situation where you’re trying to do it for your brother (who’s) fighting for his life.

“You want nothing more than to win that race for him (but) I went up there and lost on a holeshot (to Leah Pruett). I didn’t take it well,” he admitted. “I didn’t do my job that race but, fortunately, we were able to redirect our focus.

“(Through) nothing short of a miracle and the grace of the Good Lord, Dom is recovering,” he said of the younger brother of car chief Bobby Lagana Jr. “He’s gonna be banged up, in bad shape, but we’re gonna do whatever we have to do to get him back out here with us”

A cancer survivor who now advocates on behalf of those facing similar challenges, Torrence said he doesn’t necessarily believe that because he’s won three championships, he is a better driver today than he was when he turned pro. He does believe, however, that he is a better “racer” than he was when he lost the title on the last day of the 2017 season to Brittany Force.

“It’s not my driving (that has improved), it’s my outlook on everything else,” he said of three dominating seasons. “You grow as a person. You can be mature in business and you can be mature in your everyday life, but competition brings out a different side of you (and) you have to be able to harness those emotions.

“I’ve gotten a lot better. (I know) I’ve dug myself a hole with a lot of people,” he continued. “You only get one chance to make a first impression and I screwed that up with a lot of folks. We try to do the best we can. We do this as a family. Yes, it’s a job, but it’s what we do as a family for fun with every one of these guys. You go out there, put your best foot forward and maybe try to change people’s perceptions.

“That’s what I’ve really worked on the last couple seasons,” he said, “not so much wearing my heart on my sleeve but trying (instead) to control my emotions better in competition situations.”

Billy Torrence, Steve’s dad and the No. 1 qualifier as driver of the second CAPCO Contractors entry, made the Torrence crew happy as well, as he finished third in points.