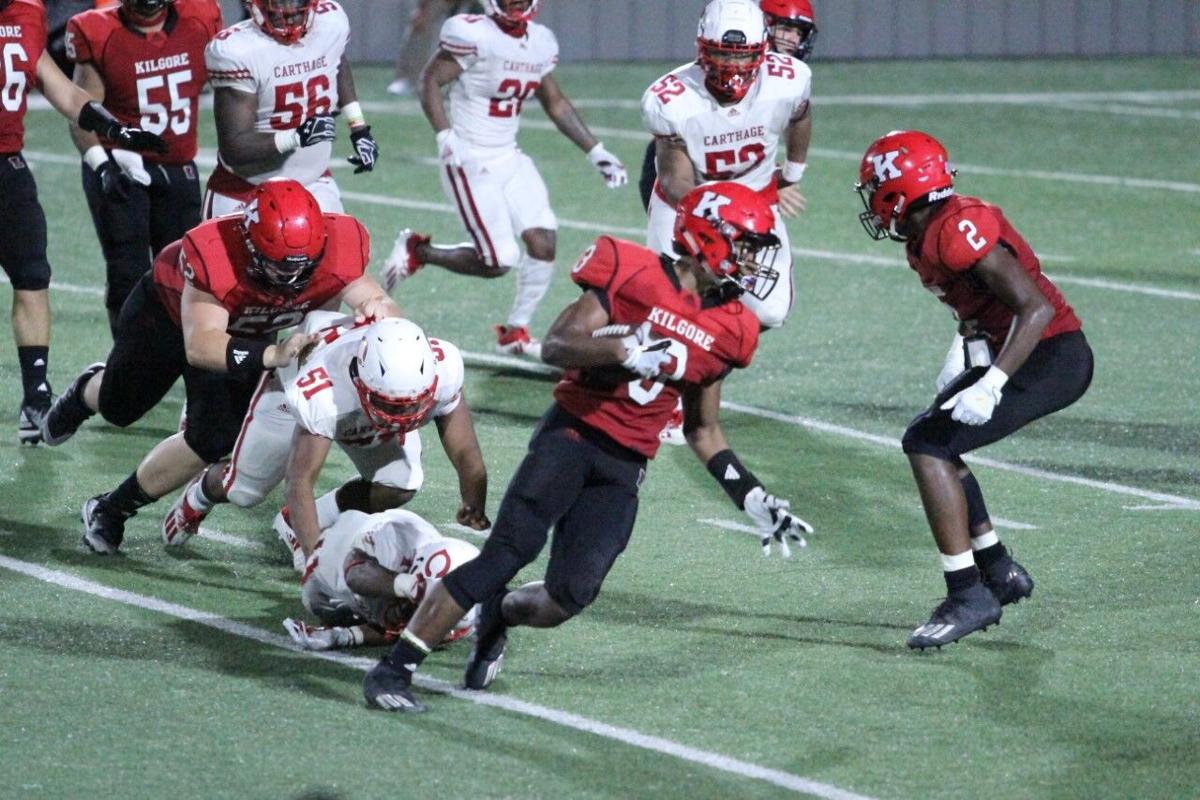 Kilgore’s Jermaine Roney (3) fights for yards against Carthage. Roney and the Bulldogs will see another stern test Friday night at home, when Terrell comes to town. Terrell had almost 500 rushing yards in a 53-0 win at Wills Point last weekend. 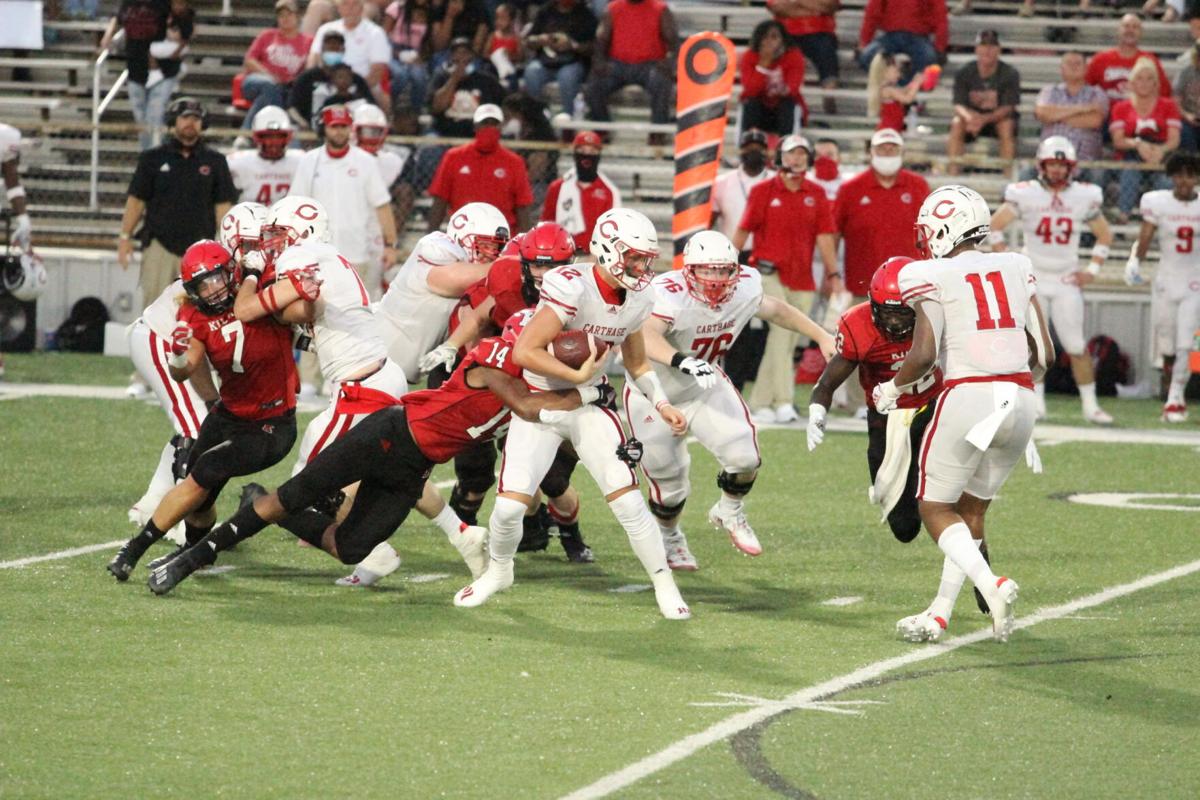 Kilgore’s Eli Caruthers (14) wraps up Carthage quarterback Kai Horton. Carthage is the number one team in the state in Class 4A, but this week’s opponent for Kilgore, Terrell, will be nothing to sneeze at. (Photo by DENNIS JACOBS)

Kilgore’s Jermaine Roney (3) fights for yards against Carthage. Roney and the Bulldogs will see another stern test Friday night at home, when Terrell comes to town. Terrell had almost 500 rushing yards in a 53-0 win at Wills Point last weekend.

Kilgore’s Eli Caruthers (14) wraps up Carthage quarterback Kai Horton. Carthage is the number one team in the state in Class 4A, but this week’s opponent for Kilgore, Terrell, will be nothing to sneeze at. (Photo by DENNIS JACOBS)

Taking on the number one team in the state is hardly an enviable task at any point of the high school football season, let alone the first game.

That was Kilgore’s job in week one last Friday night, and all things considered, the Bulldogs’ offense was able to do a fairly nice job of keeping the team in the game: Kilgore lost, 27-7, to Carthage, but forced a couple of turnovers and made Carthage, winners of seven state titles in the last 10 years, even look human at times, especially in the first half.

Coach Mike Wood’s Ragin’ Red will be back at it Friday night, again at home at R.E. St. John Memorial Stadium, against Terrell, a program Kilgore hasn’t faced in football since the 2003 postseason.

Kickoff will be at 7:30 p.m., as usual, and those planning on coming can purchase tickets in advance at the school’s athletic office, on campus in the transportation building in front of the gym. There are no reserved seats, thanks to COVID-19 caution, and all tickets are general admission, and are $5 each.

Hear the game live on the call of Ragin’ Red Broadcasting, in its 39{sup}th{/sup} season of calling Kilgore football – Doug Smith, Don Hedrick and Jason Smith.

The first quarter of last week’s season opener against Carthage was hardly one for Carthage to write home about – that rarely is said. Quarterback Kai Horton, who won a state title with the Bulldogs last year, didn’t look himself, dropping a couple of snaps on the quarterback-center exchange, and then making an unwise decision to throw downfield with Kilgore’s all-everything defensive back Donovan Adkins waiting, licking his chops.

Adkins did make the pick, and kept the game scoreless at the time.

Kilgore’s defense played a whale of a game for much of the first quarter, and all of the second half. It was that second quarter that they had problems. Kilgore trailed 21-7 at the half, and only allowed six points total in the second half.

Adkins had three, to go with the pick, and a pass break-up. Brantley Propes had four tackles and a fumble recovery.

Kilgore allowed 150 rushing yards and 19 first downs in the game.

Offensively, though, the Bulldogs struggled, there’s no two ways around it. Quarterback Dalton McElyea got off to a good start – he’s in his second season, now, as a starter – but it seemed the Bulldogs could find no real rhythm.

Jermaine Roney had a 31-yard catch and Tray Epps a 27-yard run, but both in the final minutes, when Carthage had already put the game out of reach.

Epps, a key returning starter in the backfield after rushing for just under 1,000 yards last year, had 48 yards on 13 carries. Roney had three carries, but no yards.

McElyea was 15-of-27 for 115 yards, the long completion the one to Roney. He had three interceptions by a swarming Carthage defense – in spite of numbers, this was largely a defensive game – and he did have a spectacular play to Cade Pippen at the end of the half.

McElyea and the offense watched on the sidelines as Carthage went up 21-0, leaving them 37 seconds in the first half. The Bulldogs did a nice job of moving downfield, very quickly, courtesy of a pair of throws from McElyea to Brian Brown. Brown’s last catch gave Kilgore the ball at the Carthage 9-yard-line, but with just eight seconds left.

McElyea got the job done, though, with help from Cade Pippen. Pippen, a wide receiver and the Bulldogs’ punter, hauled in a ball in the end zone for the score, giving Kilgore a manageable deficit of 21-7 at the break.

Carthage went up 27-7, though, in the third quarter on a 2-yard run by Mason Courtney, his third touchdown of the game. The extra point was blocked, but Kilgore was unable to punch back.

This week, Kilgore takes on a Terrell team that won their game in convincing fashion a week ago, dealing Wills Point a 53-0 loss.

Quarterback Kanye Nix went 6-of-9 for 165 yards and two touchdowns in the game. But the real problem for Wills Point was the Tigers’ running game. Terrell rushed for 491 yards – using 11 players – and five touchdowns.

Jonathan Maxey had 85 yards, but no player ran for more than a touchdown. Nix had 58 yards and a score.

The Tigers had three sacks on Wills Point, and kicker Cason Martinez went 7-of-7 on extra points.

After this week, as the new COVID-proof schedule continues, Kilgore will visit Alvarado, in the Dallas area.

Coach Wood is in his 11th season as head coach of the Ragin’ Red, although he has been here much longer than that, having served as defensive coordinator and assistant head coach under former coach Mike Vallery.