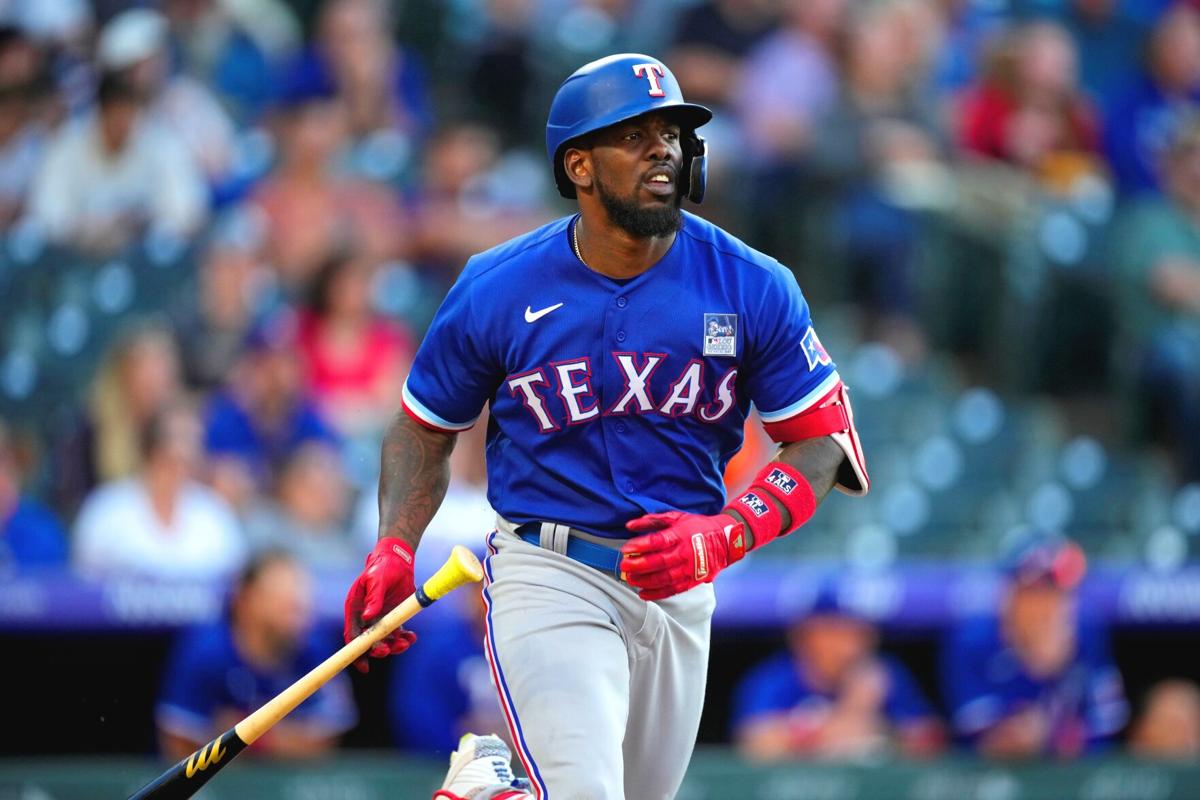 The Texas Rangers have one of baseball’s worst records, but they do have talent: the Rangers are sending right fielder Adolis Garcia (above), right-handed pitcher Kyle Gibson (below, left) and big-hitting outfielder Joey Gallo (below, right) to Denver for the Major League Baseball’s All-Star Game on Tuesday night. 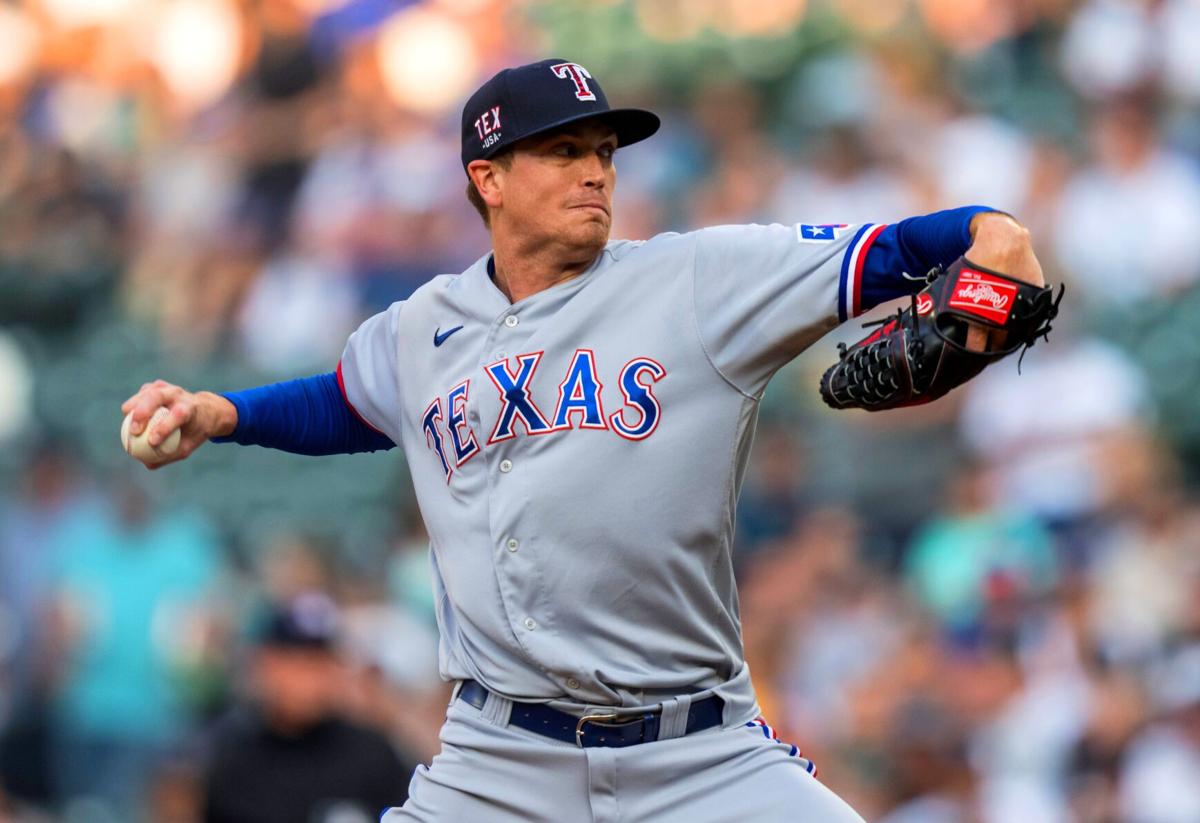 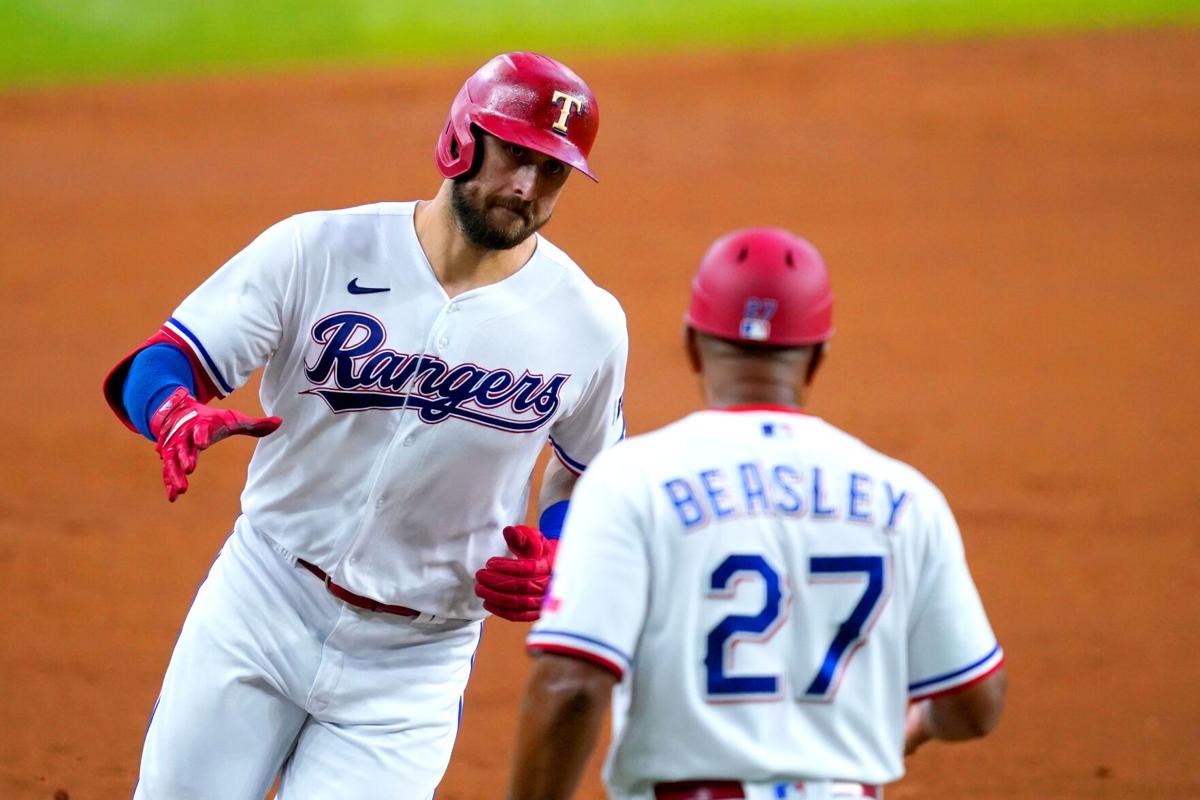 The Texas Rangers have one of baseball’s worst records, but they do have talent: the Rangers are sending right fielder Adolis Garcia (above), right-handed pitcher Kyle Gibson (below, left) and big-hitting outfielder Joey Gallo (below, right) to Denver for the Major League Baseball’s All-Star Game on Tuesday night.

ARLINGTON (AP) — The Texas Rangers have quite a trio unexpectedly going to the All-Star Game together.

There is the veteran pitcher who got only one out in the shortest opening-day start in the majors in nearly four decades; the 6-foot-5 slugger who had only two homers in the first month; and a 28-year-old Cuban rookie who wasn’t even on the Texas roster to open the season.

With right-hander Kyle Gibson and big-hitting outfielders Joey Gallo and Adolis Garcia headed to Denver for Tuesday night’s game, the only teams with more All-Star selections than the last-place Rangers are Boston, Toronto, Houston and San Diego.

“The three of them are as deserving as anyone,” said Brock Holt, who before joining his hometown Rangers this season was a 2015 All-Star in Boston, where the utility player was on Red Sox teams filled with All-Stars from 2013-19.

Major League Baseball’s home run derby is Monday night, on ESPN, a 7 p.m. start time, and the All-Star Game is Tuesday night at 6:30 p.m. on FOX. It will be the second All-Star Game for Gallo, who homered on the only pitch he saw in 2019. The 27-year-old Gold Glove-winning right fielder will also compete in his first Home Run Derby.

With two more homers Wednesday — solo shots of 440 and 462 feet pulled to right-center — Gallo became the first Rangers player ever with 10 homers in a 10-game stretch. He has 23 overall after his slow power start, but has been getting on base all season.

Gallo went into Thursday’s off day for Texas hitting .239, with the same number of homers and singles. He was sixth in the majors with a .395 on-base percentage, including an MLB-best 67 walks while with an AL-high 107 strikeouts in his 272 at-bats.

“I think over the years and over my career I’ve proved that I’m more than just a freaking home run guy. I play defense, I run the bases, I get on base. I do everything like you should want in any baseball player,” Gallo said. “I’m just viewed as a highlight reel because I hit far home runs. A lot of people don’t see all the little things that I do.”

Rangers manager Chris Woodward said Gallo is a unique player who impacts every aspect of the game. Along with the two homers and a bases-loaded walk Wednesday, Gallo also got his fourth outfield assist.

The 33-year-old Gibson (6-1, 2.29 ERA) is a first-time All-Star in his ninth season, which began with his first opening-day start and failing to get out of the first inning for the only time in his career. He had a 135.00 ERA after giving up five runs at Kansas City, after Texas had jumped ahead 5-0.

Before allowing five runs in 6 1/3 innings against Detroit in his first loss Wednesday, Gibson was only the second pitcher since 1913, when earned runs were first officially tracked, to be undefeated with an ERA under 2.00 in the first 16 starts of a season. The other was Ron Guidry, during a 25-3 season for the New York Yankees in 1978.

Gibson is a former first-round draft pick by Minnesota and played with the Twins his first seven big league seasons. While relying heavily on the sinker, he added a cutter this year and calls his All-Star selection an “unexpected exciting moment.”

“There’s a lot of ups and downs that come to the forefront when you start to even think about the times where you never thought it was going to happen, or some of the times where there is self-doubt and lost confidence,” he said.

Garcia, third in voting by fellow players to be an AL reserve outfielder, is hitting .273 with 21 homers and 59 RBIs in 77 games. He was called up April 13 after a knee injury to Ronald Guzman, and a day later became the first Texas player whose first career homer was a go-ahead shot in extra innings.

“Adolis is probably the feel-good story of the year, just what this guy has been through and where he’s come from,” Woodward said.

Nicknamed “El Bombi,” he was the 2015 MVP in Cuba’s top professional league and then allowed to play in Japan the next year, though he never went home. He joined the Cardinals as a minor league free agent, had 17 at-bats for them in 2018. Texas acquired him for cash when St. Louis removed him from its roster after the 2019 season.

Garcia played only three games for the Rangers last season, and went to spring training as a non-roster invitee. He cleared outright waivers in February — meaning every other team passed on the chance to take him — after Texas had designated him for assignment to make room for right-hander Mike Foltynewicz.

“I got extremely emotional. It’s something I always dreamed of as a kid,” Garcia said through a translator about becoming an All-Star. “It just makes me want to work even harder. I’ve got a lot to prove still. It really kind of motivates me to become a better player.”

At this writing, prior to the weekend home series against the Oakland A’s, the Rangers are 34-53.