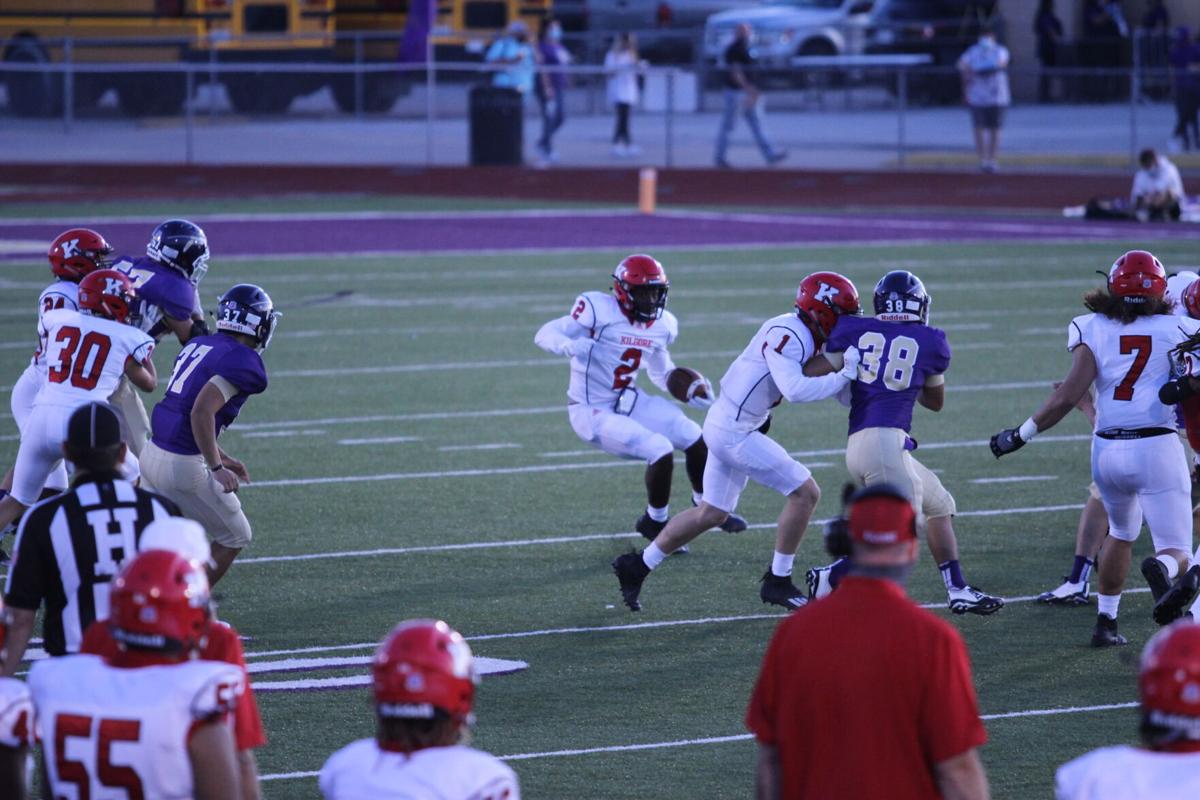 Kilgore High School’s Donovan Adkins (2) had two touchdown catches from quarterback Dalton McElyea in a 45-0 KHS win at Alvarado on Friday night. Kilgore (2-1) hosts Gladewater for homecoming next Friday. Below: Jacobe Weick (83) hauls in a pass. 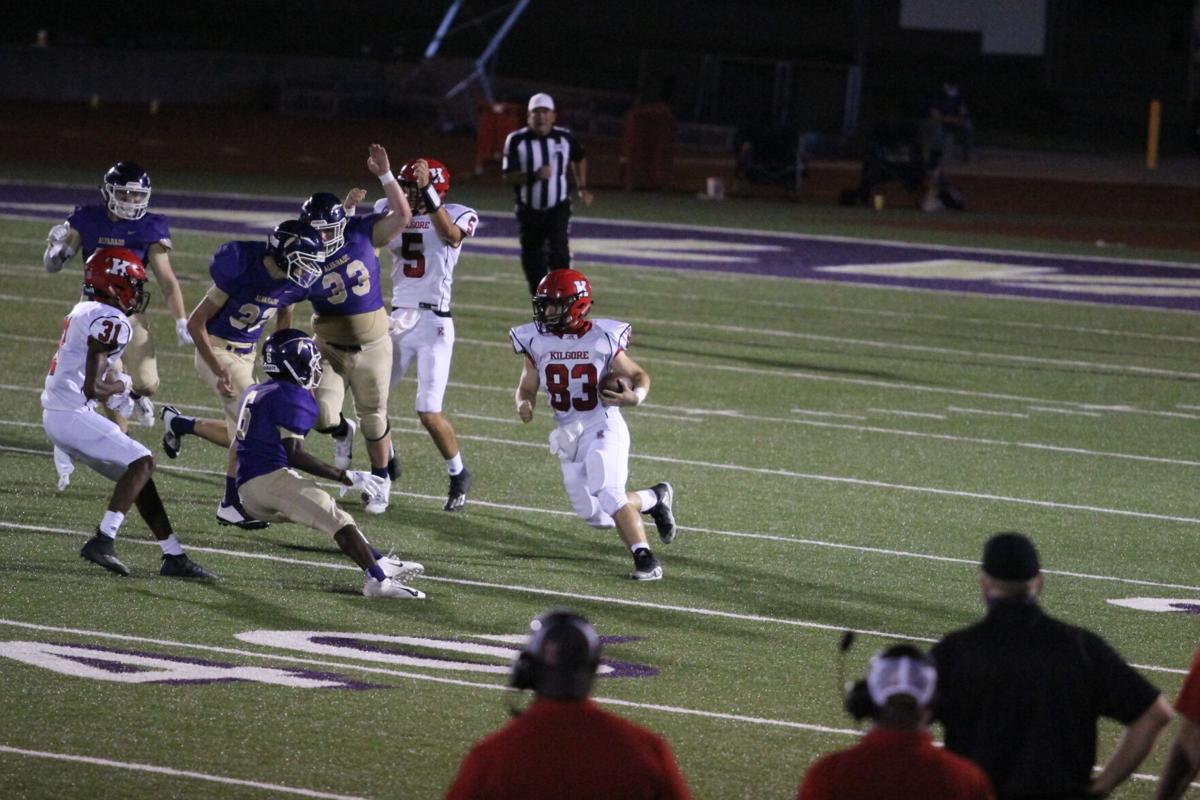 Kilgore High School’s Donovan Adkins (2) had two touchdown catches from quarterback Dalton McElyea in a 45-0 KHS win at Alvarado on Friday night. Kilgore (2-1) hosts Gladewater for homecoming next Friday. Below: Jacobe Weick (83) hauls in a pass.

EDITOR'S NOTE: This story is a longer version of the original game story published in today's print edition.

ALVARADO – It was a long way to go for a regular season game, thanks to COVID-19, but it was a good win for the Kilgore High School Bulldogs here Friday night.

And it had Donovan Adkins’ seal of approval.

The Bulldogs (2-1) will host Gladewater next Friday night for homecoming.

It was the first meeting ever between Kilgore and Alvarado in football.

Adkins, who also had a long interception return called back on a penalty, caught two first-half touchdown passes from Dalton McElyea, then a 22-yarder in the fourth quarter from Da’Marion Van Zandt. It was the first touchdown pass on varsity for Van Zandt, a sophomore.

Kilgore also had a perfect night from kicker Chris Baldazo and holder Cade Pippen – Baldazo went 6-of-6 in extra points and had a 34-yard fourth-quarter field goal.

The first half was both impressive and somewhat frustrating for Kilgore, who kept making plays, but also had some sloppy ones, including a 99-yard interception return for a touchdown by Adkins called back on a personal foul, a fumble, and a couple of penalties that just stymied drives.

But in all, the Bulldogs’ offense moved the ball efficiently. Kilgore got onto the scoreboard immediately, within the first minute of the game. Jermaine Roney reeled off a 17-yard run to Alvarado’s 41-yard-line and that set up McElyea’s first connection with Adkins, a 41-yard touchdown. Chris Baldazo added the extra point, his first of four in the first half, for a 7-0 Kilgore lead.

Alvarado put together a nice run that resulted in a first-and-goal inside Kilgore’s 5, but Adkins picked off a pass at the goal line and returned it for an apparent score. A flag was dropped and targeting was strangely called against Kilgore’s Kaden Kenney, but non-flagrant. Alvarado got to keep the ball, but only moved backwards, eventually fumbling it back to Kilgore.

On the very first play of the second quarter, McElyea found Adkins again, this time for a 24-yard score. Baldazo was good again on the point after, putting KHS up 14-0.

They would get two more before the half. Dalton Smith ended the Indians’ next threat with an interception, and Roney and Tray Epps made a couple of big plays – Epps got the Bulldogs out of a hole on a 33-yard run to the 50, but an exchange on a handoff a couple of plays later gave the ball back to Alvarado again.

Kilgore’s defense forced a punt, and then the Bulldogs went to work, a pair of huge plays resulting in a score. McElyea connected with tight end Jacobe Wieck for a 12-yard gain, found Matthew Tyeskie for a 19-yard pass and then Roney for a 37-yarder, all the way down to Alvarado’s 8. Epps did the rest, scoring on the next play, an 8-yard touchdown for a 21-0 lead.

The Indians tried to hurry up, with 1:38 left, but when quarterback West Conner looked for one of his own receivers, Kilgore defensive back Marcaelyn Caraway got the ball instead, another interception. A holding penalty was enforced, but Kilgore still got the ball, and scored two plays later on a 2-yard run by Roney, the final score of the first half.

Kilgore’s defense got the shutout, of course, and had a very good night. Not one but two interceptions were returned for touchdowns, although they were called back for penalties. Linebacker Eli Caruthers, who didn’t play last year due to injuries, had 15 tackles and continued to look very good.

Alex Chavez and Davin Rider each had a sack; Chavez had seven tackles, one for loss. Rider also had a fumble recovery and another quarterback hurry. Calloway had six tackles. Brian Brown and Chris Ervin each had four. Hunter Lewis had six tackles, and Kenney had five.

McElyea, in his second year as a starter, had his best game of this season. He completed 11-of-12 passes for 246 yards, and the two touchdowns to Adkins. Van Zandt was 2-of-4 for 35 yards, and also had a touchdown to Adkins.

Adkins finished with four catches for 131 yards and the three scores. Roney had three, for 71 yards. Epps had two for 14 yards. Brown, Weick, Tyeskie and Thomas Hattaway each had a catch: Brown for 7 yards, Weick for 12, Tyeskie for 19 and Hattaway for 16.

Roney had a punt return for 17 yards and Adkins a kick return for 22. In all, Kilgore finished with 426 yards of total offense.