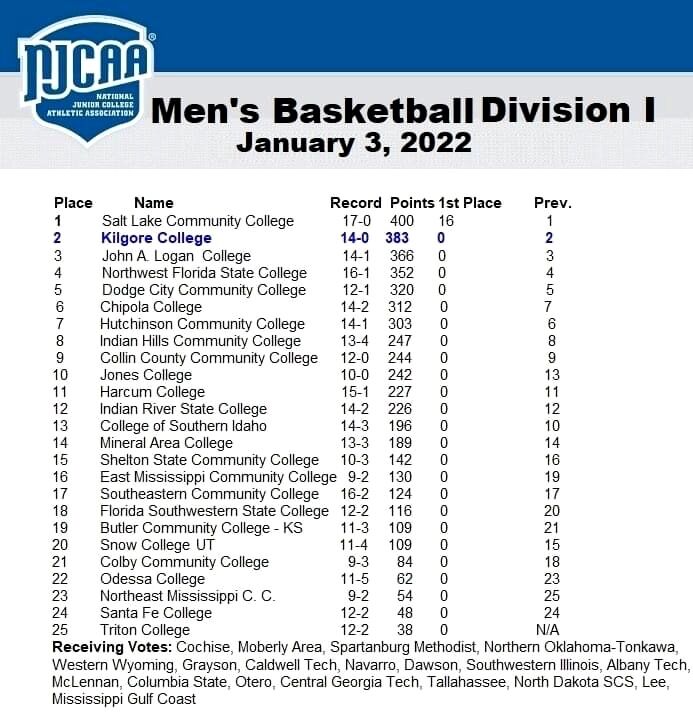 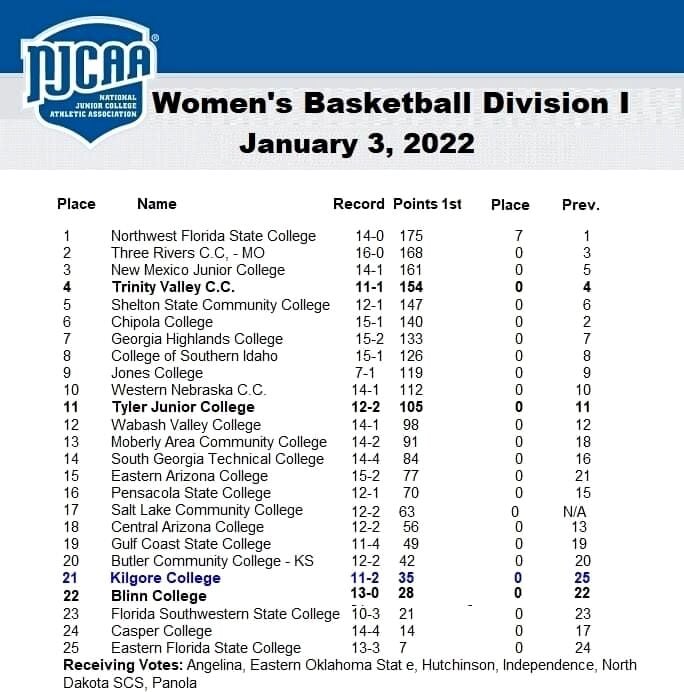 It looks like the holiday break didn’t bring a lot of rust to either Kilgore College basketball team – and both are now nationally-ranked, as the most strenuous portion of their schedule has arrived.

Both KC programs returned over the weekend, both took care of business upon hitting the court again for the first time in about two and a half weeks, and the men are home tonight.

The Rangers will host Blinn at 7 tonight in Masters Gym. The Lady Rangers are off tonight, and are back on the court Saturday at 8 p.m. at Tyler Junior College.

KC men: Coach Brian Hoberecht’s Rangers, ranked second in the nation, put an exclamation point on their return, routing Region XIV Conference rival Jacksonville College, 86-52, on Monday night in Jacksonville. The Rangers are now 15-0 on the season, and 5-0 in conference play.

As it was when the Rangers went into their break in early December, only one team – Salt Lake (Utah) Community College – is ranked above KC in the NJCAA poll. Salt Lake is 17-0, and has been at the top of the rankings in every poll this season. KC is second, and has been second for several weeks. John A. Logan College (in Illinois, 14-1) is third, followed by Northwest Florida (16-1), Dodge City (Kan.), 12-1), Chipola (Fla.) College, and then Hutchinson (Kan.), Indian Hills (in Iowa; eighth), Collin County (ninth) and Jones (Mississippi) 10th.

Of note: no other team in KC’s conference is ranked in the top 25.

The team the Rangers face tonight – Blinn – is coached by longtime KC coach Scott Schumacher, Hoberecht’s predecessor here. The Buccaneers are 8-7 overall, 1-3 in conference play, and this is their first game since Dec. 15.

The Rangers are averaging 85 points, 40 rebounds and right at 15 assists per game. They’re 8-0 here at Masters, and are hitting 35 percent of their three-point shots, 50 percent of their shots overall, and 71 percent from the free throw line.

Looking ahead, after tonight’s home game against Blinn, the Rangers play at Angelina College in Lufkin at 4 p.m. Saturday, and are back home next Wednesday for a 7:30 p.m. start against Trinity Valley.

KC women: The Lady Rangers, coached by Addie Lees, came back to action after the Christmas break with a pair of wins at LSU-Eunice last weekend.

The KC ladies have won five straight games dating back before the break. They’re 11-2 overall, and 9-2 in conference play.

Saturday’s opponent, Tyler Junior College, is 12-2 overall, 2-0 in conference play, and has won seven straight games. That game, at Floyd Wagstaff Gymnasium at TJC’s campus, tips off at 2 p.m.

On Monday, things don’t get any easier. The Lady Rangers will host Trinity Valley, is 11-1, a perennial national top-five team who regularly competes in the NJCAA national tournament, and has won three straight. They’ll be here against KC at 5:30 p.m. Saturday afternoon.

KC came back to action at LSU-Eunice last weekend, winning a pair of games: the first over Pensacola State College, 62-57, and then a second over Temple, 65-56.

So far this season, the Lady Rangers are averaging 73.8 points, 38 rebounds and 12 assists per game. Both losses have been on the road (they’re 5-0 here at Masters Gym).