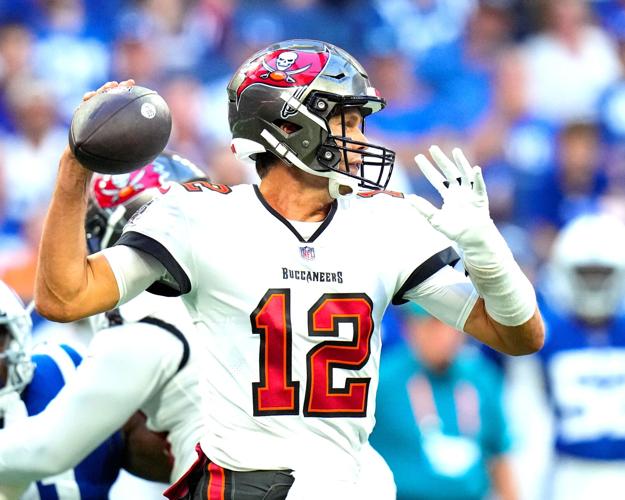 Tampa Bay quarterback Tom Brady, who has won six Super Bowls in his career (five with the New England Patriots and one with Tampa), visits AT&T Stadium Sunday night to face the Dallas Cowboys. 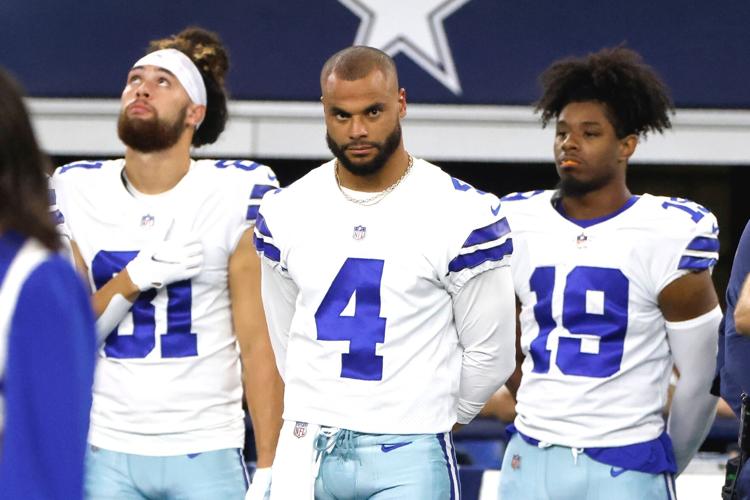 Dallas Cowboys quarterback Dak Prescott (4) will lead his team against the Tampa Bay Buccaneers on Sunday Night Football. Prescott completed just over 68% of his passes for 4,449 yards, 37 touchdowns and just 10 interceptions last season.

Tampa Bay quarterback Tom Brady, who has won six Super Bowls in his career (five with the New England Patriots and one with Tampa), visits AT&T Stadium Sunday night to face the Dallas Cowboys.

Dallas Cowboys quarterback Dak Prescott (4) will lead his team against the Tampa Bay Buccaneers on Sunday Night Football. Prescott completed just over 68% of his passes for 4,449 yards, 37 touchdowns and just 10 interceptions last season.

ARLINGTON — Tom Brady retired and then returned to Tampa Bay in the offseason before skipping a big chunk of training camp for personal reasons.

Dak Prescott didn’t miss a day anywhere along the way while getting in what he says is the best shape of his life.

Oh, how the gap is still so great for Dallas’ star quarterback as he gets ready to face the seven-time Super Bowl winner in the opener for the second consecutive year, this time at home Sunday night.

Prescott is the face of a storied franchise with five championships, but stuck in a 27-year Super Bowl hiatus.

“You definitely have to embrace it,” Prescott said. “A guy whose resume speaks for itself, who shows up at his age and is still better than most who do this. The greatest to do this, honestly, to play this position.”

Prescott embraced it last season in Tampa, throwing for 403 yards and three touchdowns in a 31-29 loss when Brady, who had four TD tosses, led the Buccaneers to Ryan Succop’s short field goal in the final seconds.

That showing by Prescott came after he missed almost the entire preseason because of a strained shoulder. At the time, he felt he was still in comeback mode from the gruesome ankle injury that ended his 2020 season.

No such setbacks for the 29-year-old this year, except for the surgically repaired ankle getting sore in practice Thursday, an issue the QB blamed on a change in cleats. He was changing back, and said he was fine for the opener.

“I still feel the best that I’ve felt in a very, very long time,” said Prescott, whose team lost a wild-card game at home to San Francisco last season. “Not even comparable to where I was last year going into this game.”

Brady opened defense of his seventh title against Dallas last season. He retired earlier this year after a divisional-round loss to the champion Los Angeles Rams despite throwing for a career- and league-high 5,316 yards at age 44.

After an 11-day absence during camp for personal reasons, Brady is set to become the first 45-year-old starting quarterback in NFL history.

“I’m going out there with a lot of good players,” Brady said. “That’s the best part for me as a competitor. It’s going with a group of teammates you really believe in. It’s not one player they’re dealing with. They’re dealing with all of us.”

Brady’s unretirement was not the only major story of the offseason involving the Bucs, who promoted Todd Bowles from defensive coordinator to coach when Bruce Arians retired and moved into the front office.

The former New York Jets coach also enters the season as a proud college graduate after completing work for a Bachelor of Science degree in youth and community development from Mount St. Mary’s University in Maryland.

Bowles began pursuit of the degree the summer before Tampa Bay’s title season of 2020. The 58-year-old finished online courses last week — more than three decades after leaving Temple, where he was a four-year starter under Arians.

“For me, it was a personal thing as far as a promise I made to my mother before she passed that I would go back and get it,” he said. “Sometimes life gets in the way and things come up and you finally put your foot down and you try and do it.”

Both offensive lines face significant questions. The Bucs had the unexpected retirement of Bucs G Ali Marpet and injuries that knocked C Ryan Jensen and LG Aaron Stinnie out of the lineup during training camp. Second-year pro Robert Hainsey has stepped in at center, and rookie Luke Goedeke will enter the season as the starter at left guard.

“The chemistry will come over time,” Bowles said. “It’s not going to be exact Week 1, but it will be good enough.”

The Cowboys are likely to be without eight-time Pro Bowl LT Tyron Smith until at least December because of a torn hamstring. Rookie first-round pick Tyler Smith will start in his place. LG Connor McGovern replaces Connor Williams, who went to Miami in free agency. Undrafted third-year player Terence Steele is the permanent, instead of temporary, replacement at RT for La’el Collins, who was released in a cost-cutting move.

Dallas linebacker Micah Parsons, the reigning NFL Defensive Rookie of the Year, leads a versatile unit that is expecting big things in the second season under defensive coordinator Dan Quinn. The Cowboys were more opportunistic than dominant last season. They’re thinking more about the latter this season.

“What I do love about this group is we got a deep crew and we are going to roll hard,” Quinn said.

Quinn, who won a Super Bowl as the coordinator for a defense-first team in Seattle, isn’t ready to call the Cowboys a top-five unit.

“We will have to see how well we can communicate into that,” Quinn said. “I would rather show what we can be, rather than talk about it.”

Dallas will see the debut of 2020 first-round pick CeeDee Lamb as its No. 1 receiver after the offseason trade of Amari Cooper in a cost-cutting move.

Depth is a concern for the Cowboys, but not the Bucs. Julio Jones joins a group that already includes Mike Evans and Chris Godwin, who’s coming back from a knee injury and says he’s a game-time decision.