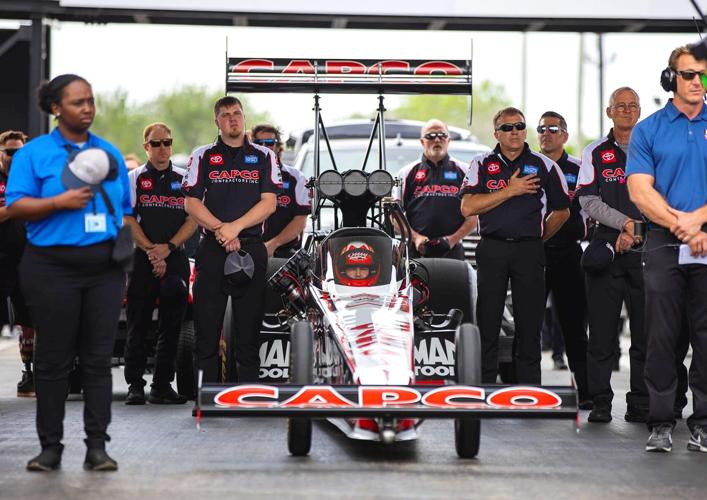 The calm before the storm... Top: Kilgore’s own Steve Torrence and members of his Capco Contractors crew await the start of another event on the NHRA Camping World tour. Torrence will try to extend a three-race Capco winning streak this week in the New England Nationals at Epping, N.H. Below: Steve shows daughter Haven Charli the way to the the finish line. 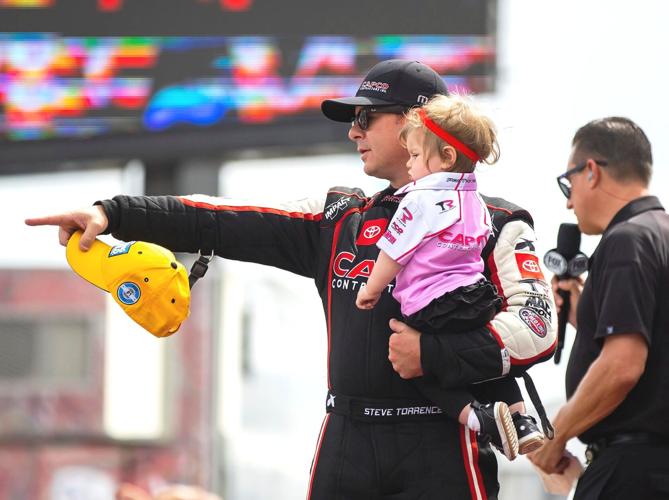 The calm before the storm... Top: Kilgore’s own Steve Torrence and members of his Capco Contractors crew await the start of another event on the NHRA Camping World tour. Torrence will try to extend a three-race Capco winning streak this week in the New England Nationals at Epping, N.H. Below: Steve shows daughter Haven Charli the way to the the finish line.

EPPING, N.H. – In the absence of defending champion Billy Torrence, it will be up to son Steve, the four-time reigning NHRA Top Fuel Champion, to keep alive a New England Nationals streak that has sent a Capco Contractors dragster to the winners’ circle the last three times the race has been contested at New England Dragway.

Trying this year to become just the fourth driver in NHRA pro drag racing history to win as many as five consecutive series championships, the younger Torrence is winless over a span of seven races for the first time since 2016.

It’s a “slump” that seems to be of concern to everyone but the 39-year-old Torrence and a veteran Capco crew led by Richard Hogan and Bobby Lagana Jr.

“What these Capco Boys have been able to do the last five years is amazing,” Torrence said of the team’s 43 wins in 102 starts from 2017 through 2021, “but there’s no way, with this kind of competition, we were gonna be able to keep up that pace.

“We’re doing what we’ve always done,” he said, “taking what the track gives us and trying not to beat ourselves. If we keep putting ourselves in a position to win, we know eventually it’s going to happen. We’re close, real close.”

Although he has not yet been able to add a 52nd NHRA Wally trophy to his growing collection, Torrence returns to New England Dragway, a track on which he won in both 2018 and 2019, in second place in points behind only three-time 2022 winner Brittany Force.

He has guided his hybrid hot rod to the semifinals or beyond five times with runner-up finishes in the NHRA Four-Wide Nationals at Las Vegas, Nev., and, two weeks ago, in the Virginia Nationals at Richmond.

Nevertheless, he will be racing solo this week for the sixth time in eight races this year while the team conserves resources and while his dad, an eight-time tour winner in his own right, manages the family’s oil-and-gas pipeline construction business.

Qualifying began Friday night, and continue today with runs at 12:30 and 3:30 p.m. Sunday eliminations begin at 10 a.m., Texas time with TV coverage of both qualifying and eliminations on Fox Sports 1 (FS1).