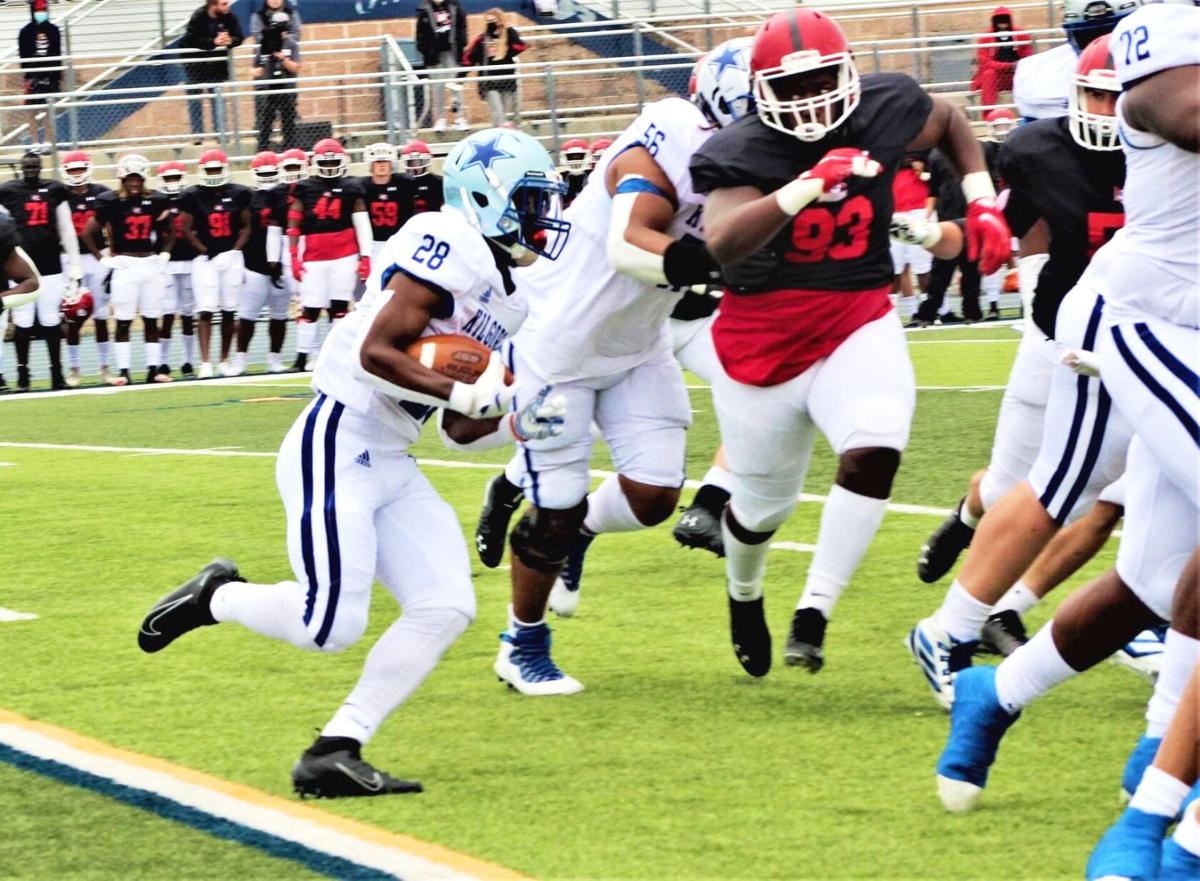 Kilgore College running back Kennieth Lacy (28) looks for running room against Navarro. Lacy had 208 yards and two touchdowns, KC had over 700 yards of offense and the Rangers beat Navarro, 52-38. KC (4-0), still ranked second in the country, visits Tyler on Saturday at 3 p.m. See more of these photos on Facebook, courtesy of Marvin Hillhouse’s page, Marvin’s Photos. 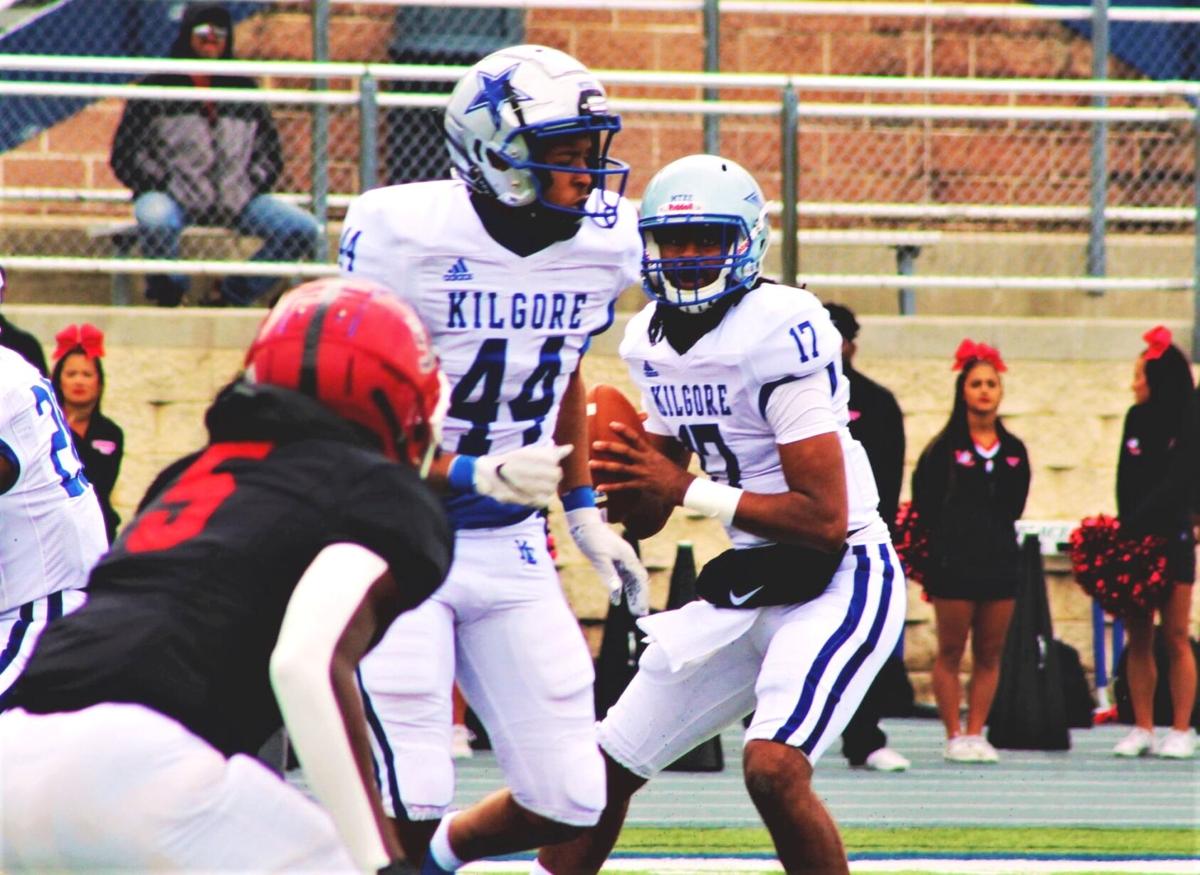 Malcolm Mays (background) looks to pass against Navarro, as tight end Joseph Hearvey (44) runs behind the line of scrimmage. Mays threw two touchdowns and ran for another in Saturday’s win at Navarro. 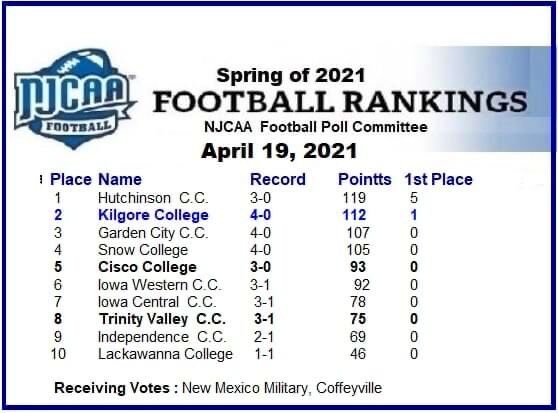 Kilgore College running back Kennieth Lacy (28) looks for running room against Navarro. Lacy had 208 yards and two touchdowns, KC had over 700 yards of offense and the Rangers beat Navarro, 52-38. KC (4-0), still ranked second in the country, visits Tyler on Saturday at 3 p.m. See more of these photos on Facebook, courtesy of Marvin Hillhouse’s page, Marvin’s Photos.

Malcolm Mays (background) looks to pass against Navarro, as tight end Joseph Hearvey (44) runs behind the line of scrimmage. Mays threw two touchdowns and ran for another in Saturday’s win at Navarro.

That’s a good thing, because there may be quite a bit more to come this season.

The Rangers visited Navarro at Corsciana on Saturday, and came away with a 52-38 win, moving to 4-0 on the season. KC, already ranked second in the nation in last week’s NJCAA poll, remained in second when the newest poll was released on Monday (see more below).

KC running back Kenneith Lacy had 208 yards rushing and two touchdowns, and quarterback Malcolm Mays accounted for three touchdowns in the victory (two passing and a 2-yard rush). It was the third straight year the Rangers have beaten Navarro, whose last win over a KC team was fall 2017.

The game at Navarro was far from a KC runaway.

Isaiah Robinson gave the Bulldogs a 7-0 lead early, on a 56-yard run, and late in the first quarter, KC kicker Kenny Pham hit a 25-yard field goal to cut into that, 7-3.

Kilgore High School alum Lacy hit another long-distance home run, like he did against New Mexico Military last week, with a 78-yard touchdown run to give the Rangers a 9-7 lead with just over 12 minutes left in the first half. Navarro stole the lead back, though, going into the halftime break on a 45-yard field goal by Alexis Lopez.

And then things got crazy.

Just inside the third quarter in a low-scoring game, on fourth down and 9, all the pressure – and the Rangers made it happen.

Mays converted a fourth down pass to Willie McCoy inside Navarro College’s 15-yard-line and two plays later, running back Bailee Davenport did the rest, getting into the end zone to break a 17-all tie.

With 3:03 left in the quarter, Navarro hit a wide-open Quinton Lee, who got behind the Rangers’ defenders for a 69-yard touchdown. Navarro hit the extra point and tied the game again, this time 24-24, with 2:48 left.

KC took over at its own 29 after the kickoff, with Mays still in at QB and Lacy behind him as the running back for the series. Mays missed Marquese Pearson over the middle on first down, and set Lacy up for a huge run on second down, all the way down to Navarro’s 30-yard-line, for 41 yards.

The clock rolling, in a four-wideout set, Garrett Johnson got KC within a half-yard of the first down at Navarro’s 20. On second and less than one, Johnson got free through the defensive front and made a defender miss, giving the Rangers first and goal at the 5. Johnson fumbled the ball, it rolled into the end zone, and McCoy fell onto the ball – touchdown, the officials ruled.

Pham hit the extra point and with just 40 seconds left, and KC went into the fourth quarter with a 31-24 advantage.

Navarro College, not known for their defense this season (giving up 499 yards through three games before the KC game), punted the ball back to KC on the second play of the fourth quarter. The Rangers took over at their own 28.

KC wasted no time, hooking up with Pearson down to the 49 for a 21-yard gain. Mays scrambled for a first down into NC territory, then found McCoy for 12 yards and another first down. On the very next play, Mays connected with Anthony Isom, who got behind the Bulldogs’ safeties and hauled it in for a 30-yard score. The Rangers were flagged for celebration after the score, but extended the lead, 38-24, with 13:12 left.

Navarro got a huge kick return, all the way back to their own 45. Louie Moore made a catch between two KC defenders, all the way down to KC’s 20. KC defensive back Jacob Washington almost picked off a pass on the next play, which fell incomplete. But two plays later, Navarro scored on a 9-yard touchdown run, pulling within a touchdown of KC, 38-31, with 11:40 left in the game.

Navarro then pulled a fast one, a quick onside kick. Officials originally ruled that Navarro had touched the ball before it went 10 yards, but that official was apparently overruled and Navarro was ruled to have recovered it, right at the 50.

Navarro’s drive began to stall at KC’s 15. On second and 3, KC linebacker Quinton Sharkey slapped down a pass, and put the Bulldogs in third down. The snap bounced off the hands of Navarro QB Quay Gray, and he caught it, but lost about 10 yards.

Unfortunately for the Rangers, Navarro went for it on fourth down and got it – the game-tying touchdown – a 22-yard catch by Tru Edwards. The extra point by Alexis Lopez did tie it, and Navarro successfully came back from a two-touchdown lead to tie it at 38 with eight minutes left in the game.

A late-hit penalty burned Navarro on the ensuing kickoff, and gave the Rangers the ball at their own 45.

It didn’t take long for the go-ahead score: Lacy ran right through the heart of the Navarro defense for a 52-yard touchdown. Pham’s extra point gave the Rangers a 45-38 lead with 7:34 left.

Tristan Driggers made two fantastic plays for KC on Navarro’s drive, both for loss of yards, but the Bulldogs were able to drive deep into Rangers’ land, until finally Bray was sacked by Maurice Westmoreland and Sharkey, putting NC in fourth and 11.

The Bulldogs got desperate, threw it deep, and Josh Joseph intercepted it at KC’s 10, with 2:51 left.

Brandon Webb ran 10 yards right at the marker for a first down. Webb lost a yard on the next carry, and Navarro took a time out with 1:57 left.

Gooden and his coaches made the call to throw long on a third-down play, trying to get a first down and run out the clock. Mays lofted the ball 30 yards downfield, and Navarro was flagged for sideline interference. That set the Rangers up with a first down – a new set of downs, in fact – at their own 36, with roughly a minute and a half remaining.

KC ran the ball on first and second downs, but not for much, and on third down with the clock running off and with Navarro thinking the Rangers were going to run the ball, the Bulldogs jumped offsides. Mays saw the mistake and instead of running, threw a quick pass and McCoy made the catch, pulling away from the defender for a 62-yard touchdown, Mays’ fourth TD pass of the game, for the eventual final score.

The offensive numbers were pretty much that – offensive. KC rolled up 714 total yards, Navarro, 469 on a good KC defense. KC had 71 offensive plays, and Navarro, 67.

The Rangers got a good day from Mays, who completed 17-of-26 passes for 319 yards and those two touchdowns, running for a 2-yarder himself. Five different Rangers caught passes: Pearson finished with six catches for 123 yards. McCoy finished with five catches, also for 123 yards, and that 62-yard score. Isom had two catches for 40 yards and the score. Nazavien Floyd had two for 19 yards and Joseph Hearvey had three for 14.

On the Navarro side, Gray completed 27-of-44 passes for 347 yards, two touchdowns and two interceptions. Robinson ran for 139 yards and two scores on 18 carries, and Quinton Lee had seven catches for 121 yards and a score.

As for the poll, Hutchinson (Kan.) remained number one, although its game last weekend was inexplicably canceled. The Blue Dragons are scheduled to play third-ranked Garden Valley on Saturday.