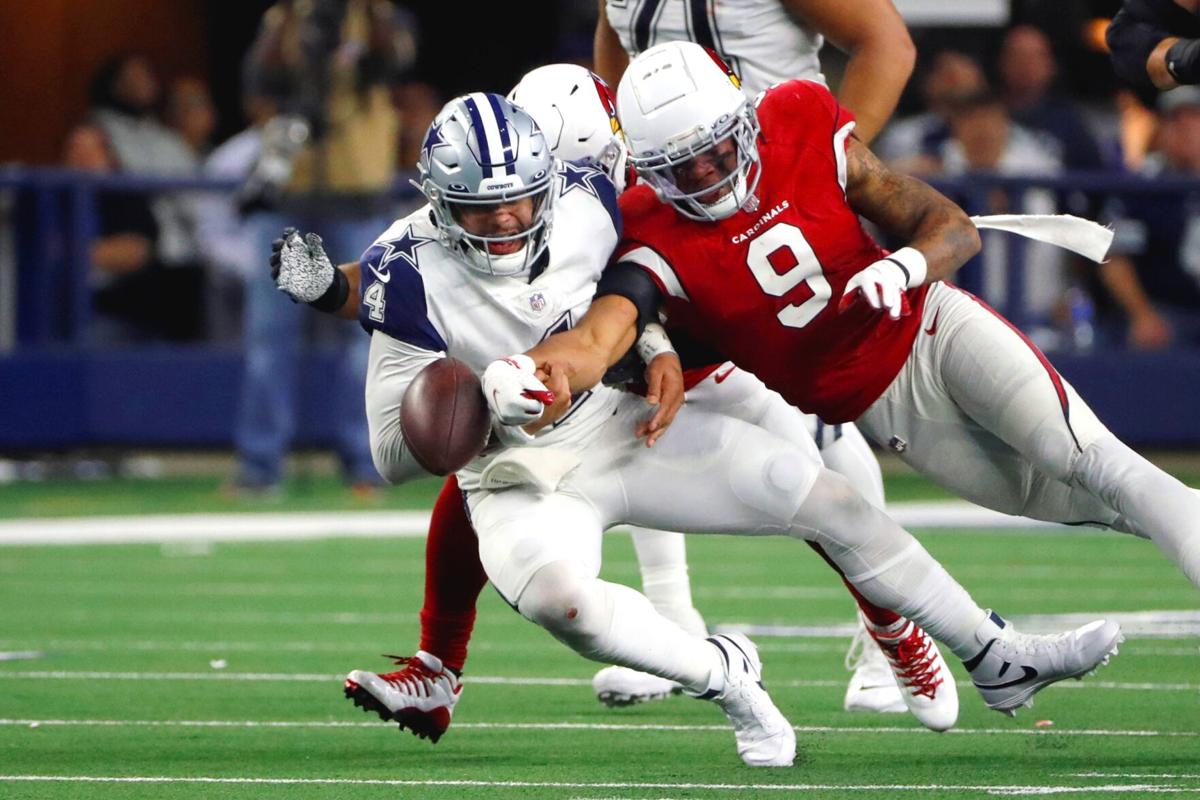 Arizona Cardinals inside linebacker Isaiah Simmons (9) forces a fumble by Dallas Cowboys quarterback Dak Prescott (4). The Cowboys have already won the NFC East, and will finish the regular season Saturday at Philadelphia, but are weighing whether or not they’ll play Prescott and other starters in that game, or give them a rest headed into the playoffs. 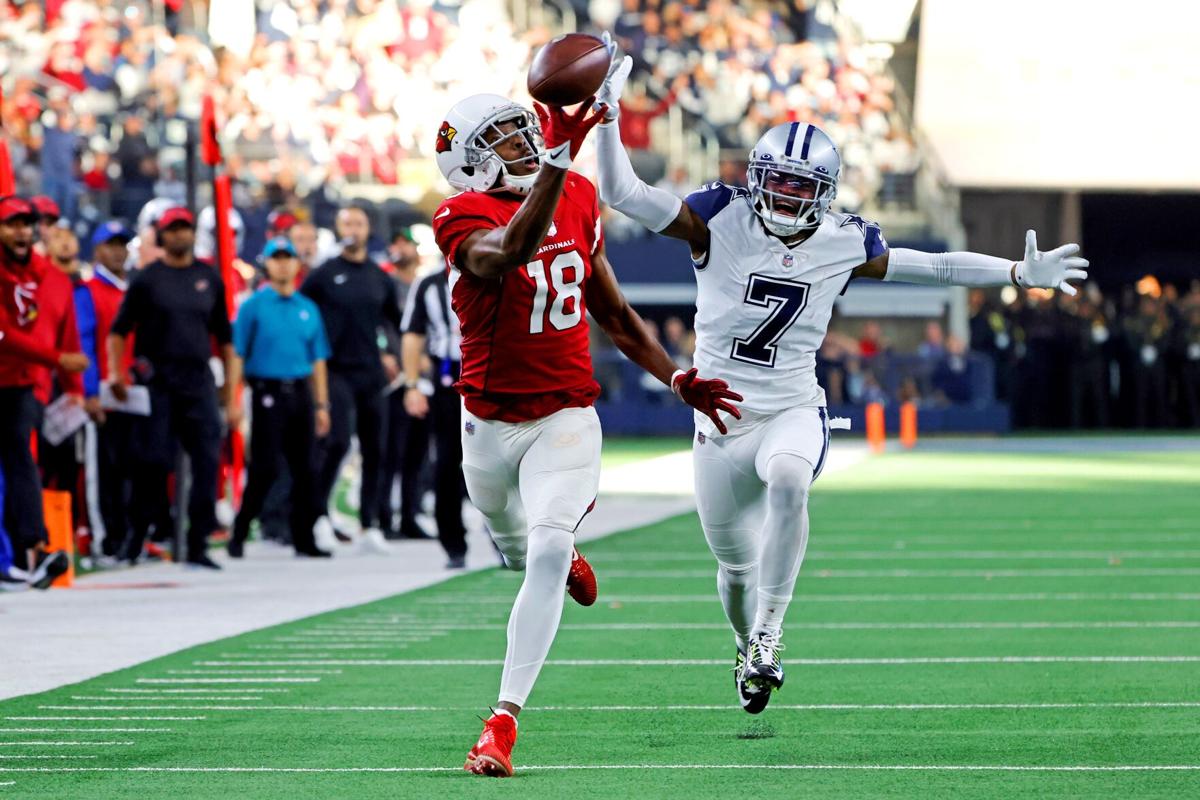 Arizona Cardinals inside linebacker Isaiah Simmons (9) forces a fumble by Dallas Cowboys quarterback Dak Prescott (4). The Cowboys have already won the NFC East, and will finish the regular season Saturday at Philadelphia, but are weighing whether or not they’ll play Prescott and other starters in that game, or give them a rest headed into the playoffs.

ARLINGTON — The Dallas Cowboys have to figure out whether to play quarterback Dak Prescott and the other stars and starters Saturday, with only playoff seeding at stake in the finale of the first 17-game regular season at Philadelphia.

The offense could use the time to figure out what happened to the unit that routinely produced at least 400 yards during a 6-1 start, and try to bury the inconsistent showings in the 5-4 record since.

The Cowboys (11-5) know what they have on defense going into a second consecutive matchup with another playoff-bound team in the Eagles (9-7) on Saturday night a 7 p.m. kickoff. They can’t dominate without forcing turnovers.

There’s a good chance Dallas will remain the fourth seed regardless of the outcome against Philadelphia and play Arizona at home again in a wild-card game two weeks after the Cardinals’ 25-22 victory at AT&T Stadium.

Coach Mike McCarthy wasn’t so sure, saying he’d wait at least a day to discuss it. With the Eagles assured of being no better than the sixth seed, a game moved up a day into primetime might be a glorified preseason contest.

Unless the Cowboys would prefer to build on something going into the playoffs. It wouldn’t hurt to beat a team with a winning record for the first time since Week 4.

“We’re still trending in the right direction, whether it be a loss today or not,” defensive end Randy Gregory said. “Philly is going to be a tough game — an NFC rival and playing there. It’s going to be a little bit of a playoff atmosphere for us. If we just go out there and take care of business, we’ll go into the playoffs on a good note.”

What’s working: Prescott seems to be getting more comfortable running nearly 15 months removed from the gruesome compound fracture of his right ankle that ended his 2020 season. While this is an indictment of a stalled Dallas run game, Prescott had a team-high 20 yards and helped keep the last two touchdown drives against Arizona alive with his legs.

What needs help: The offensive line just isn’t creating enough running room for Ezekiel Elliott and Tony Pollard, even with all five expected starters finally together. Elliott had 16 yards, the second-lowest total of the two-time rushing champ’s six-year career. The combined Elliott-Pollard total of 25 yards was a season low.

The blockers compounded the problem with three holding penalties, all of which led to punts. The first was by eight-time Pro Bowl LT Tyron Smith in his return after missing the past two games with an ankle injury that has sidelined him for five games overall.

Stock up: Dalton Schultz is now the second Dallas tight end to have at least 70 catches in a season. Jason Witten, the club’s career leader in catches, yards receiving and games, had nine such seasons. Schultz was targeted a season-high 10 times with six catches for 54 yards against the Cardinals. Although the overall offensive production didn’t show it, Dallas is more efficient when Schultz has a prominent role.

Stock down: The Dallas coaches were outwitted by Arizona’s staff. The Cardinals sent out the field-goal team on fourth-and-5 from the Dallas 8 late in the third quarter, but lined up to run a play with kicker Matt Prater split wide right. The moved forced the Cowboys to call a timeout, after which Prater kicked the third of his four field goals.

Dallas desperately needed that timeout late in the fourth quarter when it appeared a review would give it a fumble recovery after Chase Edmonds was ruled down before the ball came out just before the two-minute warning. The Cowboys couldn’t challenge because they didn’t have a timeout. Had it been after the two-minute warning, an automatic booth review would have been in play.

Injuries / COVID: WR Michael Gallup’s season is over with an apparent anterior cruciate ligament injury in his left knee. It happened on his 21-yard touchdown catch late in the first half. ... LB Keanu Neal was out after going on the COVID-19 list for the second time this season late in the week.

Key numbers, 11-5 and 9-7: This is the first time the Cowboys have played an NFC East opponent when both teams had a winning record since the 2017 finale, also at Philadelphia. That game was meaningless because the Cowboys had been eliminated and the Eagles had already secured a first-round bye on their way to winning the Super Bowl. Dallas hasn’t played a division opponent with a winning record since November 2018 against Washington.

Next steps: The Cowboys still could be as high as the second seed, but would need a win combined with losses by reigning Super Bowl champion Tampa Bay against last-place Carolina and the Los Angeles Rams against San Francisco. There also is a path to the No. 3 seed for Dallas.