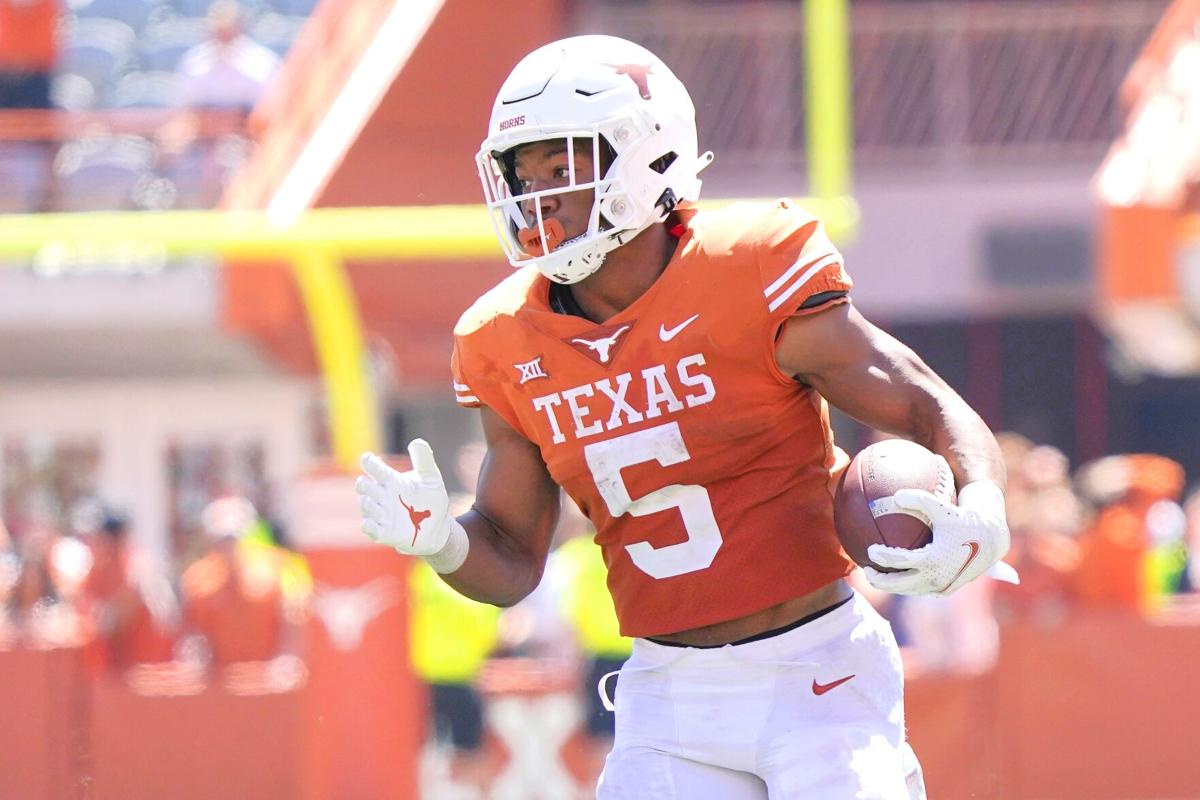 Texas running back Bijan Robinson (5) is shown here running for a touchdown against Texas Tech. Oklahoma quarterback Spencer Rattler (right) and the Sooners are still unbeaten, although it’s been a bit rocky. The two rivals meet today at the Cotton Bowl, an 11 a.m. kickoff on ABC. 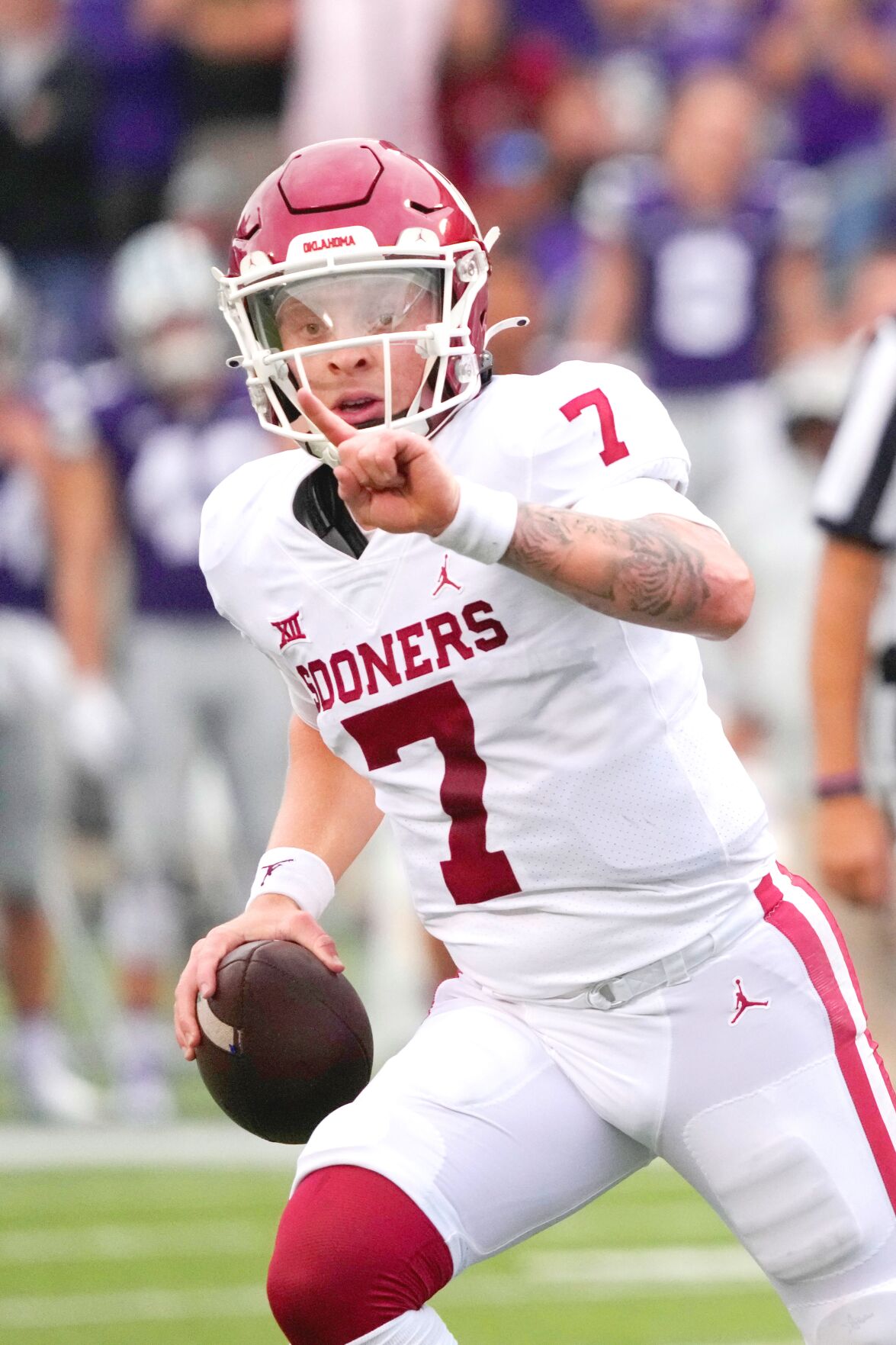 Texas running back Bijan Robinson (5) is shown here running for a touchdown against Texas Tech. Oklahoma quarterback Spencer Rattler (right) and the Sooners are still unbeaten, although it’s been a bit rocky. The two rivals meet today at the Cotton Bowl, an 11 a.m. kickoff on ABC.

This is how the second Saturday of October is supposed to be for No. 6 Oklahoma and No. 21 Texas, even though their Red River rivalry won’t be a Big 12 game for too much longer.

The Sooners (5-0, 2-0 Big 12) and Longhorns (4-1, 2-0) are both nationally ranked with first place in the Big 12 on the line. The stands should be full again, with fans in crimson and burnt orange split at the 50-yard line. The aroma of food from the bustling state fair midway just outside 92,100-seat Cotton Bowl Stadium will waft inside.

“Excited that we get to get back to the Cotton Bowl with a more normal atmosphere. I missed that in the epic clash last year,” Sooners coach Lincoln Riley said. “We say it every year but I think it can’t go underappreciated. The best parts of this job (are) to get to coach, play and compete in this game.”

Kickoff, of course, is this morning at 11, on ABC.

When unranked Oklahoma won in four overtimes last October, the crowd was limited to about 24,000 fans, and the State Fair of Texas was shut down for the first time since World War II because of the pandemic. A full house is expected Saturday and the unique atmosphere where the cheering never stops can overwhelm some young players.

“I’m from Arp, Texas, population 900, and you’re going to see that many people just riding in on the bus,” said Texas senior linebacker DeMarvion Overshown, who had a career-high 11 tackles with an interception against Oklahoma last year. “I tell (the first-timers) to enjoy it. It’s a feeling that not a lot of people get to experience, so enjoy the experience, but when we touch the field, it’s time to lock in because we’ve got a job to do.”

Spencer Rattler and the Sooners have a 13-game winning streak that began with that 53-45 victory over the Longhorns. Rattler threw two touchdowns in OT after being on the bench part of the first half because of a poor start.

Texas and Big 12 rushing leader Bijan Robinson have a much shorter but still impressive streak. The Longhorns have scored 160 points while winning three in a row since a loss at Arkansas of the Southeastern Conference, the league the Sooners and Longhorns will join no later than 2025.

“Honestly, I don’t really think the SEC has a whole lot of impact on this game. That’ll happen when it happens,” Riley said. “I don’t know that you could add any more intensity or importance to this game.”

Robinson is getting some Heisman Trophy attention as the nation’s second-leading rusher (130.4 yard per game) and with a Big 12-high nine TDs (seven rushing, two receiving). The Sooners have the league’s top rushing defense, allowing 79.4 yards per game.

“He jumps off the tape,” Oklahoma defensive coordinator Alex Grinch said. “You kind of halfway see from afar as you prepare for your opponents and see the games. You hope when you turn on the video, it’s going to be hype and not real. But in this particular case, it matches.”

Alabama-Texas A&M: When Alabama opened the season ranked first and Texas A&M was sixth, many figured their Week 6 meeting would be a can’t-miss-it showdown. Now that it’s here, it certainly isn’t the game that was expected.

Alabama is exactly where it was predicted to be, undefeated through five games won mostly with ease. But the Aggies limp into tonight’s game unranked after consecutive losses to Arkansas and Mississippi State that dashed their goal of finally competing for a national title.

They’ve lost eight straight to Alabama, and the oddsmakers are confident that the skid will stretch to nine with Texas A&M entering the game as 17 ½-point underdogs to the defending national champions.

Despite this, Alabama coach Nick Saban knows the Aggies have too much talent for his team to take them lightly.

In College Station, coach Jimbo Fisher spent the week challenging his players to clean up their mistakes and rise to the challenge.

“The guys are disappointed and down,” Fisher said. “But they understand there is a lot of football left and a lot of work we can do and a lot of room that we can get better in.”

The player who has shouldered most of the blame for A&M’s struggles is quarterback Zach Calzada. The former backup has had a tough time since taking over at halftime of the team’s second game after Haynes King broke his leg.

Calzada has averaged just 143 yards passing with two interceptions with one touchdown in two SEC games.

Fisher said Calzada is making progress and believes the team is behind him. But the veteran coach knows that he’ll face the bulk of the criticism for the team’s problems until they start winning.

“Anytime you are the quarterback and you don’t win, everything is going to be scrutinized — every throw, every time you touch the ball,” Fisher said.

Saban is 24-0 against his former assistants, including a 42-21 win over Lane Kiffin and No. 17 Ole Miss last week. Fisher has faced his old boss more than any of the others. He’s met Saban four times with the first coming in 2017 when Fisher coached Florida State and the past three years at Texas A&M.

Texas A&M falling from the rankings gives Alabama a chance to extend a record. The Tide has beaten 100 consecutive unranked teams starting with a win over Colorado in the 2007 Independence Bowl to end Saban’s first season.

Texas Tech-TCU: Texas Tech and TCU were both coming off unsettling losses when they played last weekend. They responded with different results, and now face each other.

“As sad as we were, upset as we were, as embarrassed as we were last week, we feel that good this week,” Texas Tech coach Matt Wells said. “Now now what it needs to do is inspire us to go back and restart all over again.”

TCU (2-2, 0-1), which plays in Lubbock on Saturday night, lost to local rival SMU and then fell 32-27 in its Big 12 opener last week against the same Texas team that a week earlier at home overwhelmed the Red Raiders, 70-35.

After traveling nearly 1,500 miles for the game and taking a 17-0 halftime, the Red Raiders still needed Jonathan Garibay’s 32-yard field goal with 18 seconds remaining to win 23-20 at West Virginia. They were without six starters, including top receiver Erik Ezukanma (concussion protocol) and leading rusher Tahj Brooks (lower leg). Quarterback Tyler Shough (broken collarbone) was already out until at least November.

“Very satisfying as a coach to see these guys pull together and be very resilient, show a ton of grit,” Wells said. “Shows you the power of team, the power of we.”