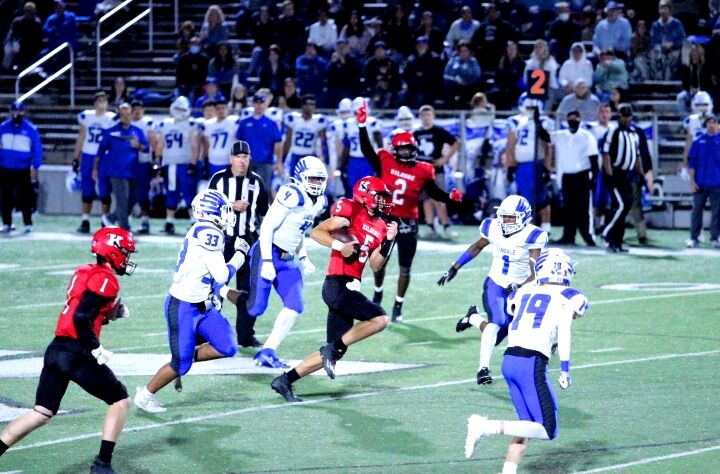 Kilgore quarterback Dalton McElyea (5) scrambles for a big gain against Lindale Friday night, here at R.E. St. John Memorial Stadium. The game came down to the wire, but Lindale held on, 47-40. Kilgore (7-3) heads to the playoffs this week; see kilgorenewsherald.com for updates on when and where. 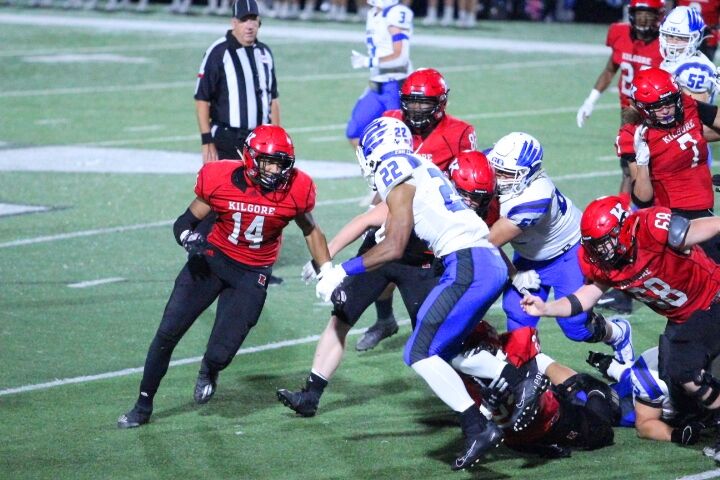 Kilgore quarterback Dalton McElyea (5) scrambles for a big gain against Lindale Friday night, here at R.E. St. John Memorial Stadium. The game came down to the wire, but Lindale held on, 47-40. Kilgore (7-3) heads to the playoffs this week; see kilgorenewsherald.com for updates on when and where.

And for the duration of that game, Kilgore and Lindale played a game for the ages, one that recalled the Kilgore days of both honorees.

The Bulldogs and the Eagles teed it up here at R.E. St. John Memorial Stadium Friday night in a game for the District 9-4A, Division I title that absolutely lived up to every bit of its billing.

Unfortunately for the Bulldogs, they came up short – but man, was it close, a 47-40 Lindale win.

That wraps up the regular season, with Kilgore having won five of its last six. The Ragin' Red will go into the UIL Class 4A playoffs this coming Friday, and they'll do so at home, an unexpected home game.

Back to the district title game.

Lindale’s Jordan Jenkins, a Baylor commit, ran for 290 yards and six touchdowns, including one with 1:23 left. Kilgore’s Donovan Adkins, though, scooped up a loose-ball blocked extra point, returning it for two points and allowing the Bulldogs to stay within a touchdown.

Kilgore got the ball back with a last shot to tie, or go ahead. Quarterback Dalton McElyea went to work quickly, hitting Brian Brown for a 15-yard pass, then Corey Rider for 19. Lindale was flagged for pass interference and Kilgore had a first down at the Eagles’ 22-yard-line.

But Lindale’s Jacob Seekford, who also had a big return in the game, came across the middle in front of Jermaine Roney and picked off a pass at the goal line, sealing not only the win, but also clinching the District 9-4A, Division I championship in the process.

Kilgore received the ball and immediately put points on the board. The Bulldogs scored in just over a minute and a half, a four-play drive that ended with a bang, a 54-yard touchdown by Epps, with 10:20 left on the first quarter clock. Baldazo hammered the extra point through and gave KHS a 7-0 advantage.

Lindale came right back with its own big guns, Jenkins and Peterson, and scored just less than two minutes later, tying the game at 7-all, on a six-play, 68-yard drive, Jenkins did the honors on a 13-yard run.

The arms race was on.

Lindale appeared to have forced the Bulldogs to punt on their next possession, a dangerous punt from Kilgore’s own goal line. But the Eagles jumped offsides on the fourth and four, resulting in a first down.

The Eagles would regret that immediately.

McElyea found Epps on a screen pass and Epps made them pay, a 50-yard gain to Lindale’s 28-yard-line. The drive stalled, but Kilgore did get points out of it, a 32-yard field goal by Baldazo that put KHS back in front, 10-7, with 3:44 left in the quarter.

A personal foul on Kilgore on Lindale’s next drive gave the Eagles a new set of downs, then, after they scored three plays later on a 1-yard run by Jenkins, who added the two-point conversion to the lead, and Lindale went up 15-10, with just over a minute left in the first quarter.

Kilgore’s next play brought disaster. Lindale’s Corey Sanders picked off a McElyea pass over the middle, and set the Eagles up at Kilgore’s 23. Another penalty moved Lindale half the distance closer, to the 11, and Jenkins did the rest, his third touchdown of the half. Lindale led Kilgore 22-10.

The Bulldogs got seven points back immediately. On the ensuing first down, McElyea hit Jermaine Roney on just a short pass, and Roney turned on the afterburners, taking it to the house for a 64-yard touchdown. Baldazo’s kick got KHS within five, 22-17, with 16 seconds left in a wild first quarter.

In the second quarter, Kilgore’s defensive front appeared to have Peterson bottled in, but he bootlegged to his left and found Alford for a 14-yard gain, then, two plays later, he connected with Seekford for a 51-yard pass – Kilgore defensive backs managed to pull him down at the 1. Jenkins scored on the next play, his fourth score of the night.

Adkins came off the corner and blocked the extra point, leaving it at 28-17.

Kilgore found itself in a second and 20, on the final drive before the half, at its own 42, and McElyea put on his Superman cape, running free from the pocket for a 24-yard gain, all the way to Lindale’s 35, bringing the crowd to their feet.

Adkins and McElyea would combine for a huge play seconds later, a 20-yard touchdown pass to Adkins to send it to the half with Lindale up, 28-24.

Leading 28-24 at the start of the third quarter, Seekford bolted free for a 52-yard kick return, and allowed the Eagles great field position: quarterback Sam Peterson would score five plays later on a 2-yard run. Lindale’s lead went up to 11, 35-24.

Kilgore punched back, a 38-yard pass from McElyea to Donovan Adkins, and got within four on Chris Baldazo’s extra point, 35-31, with 8:33 left in the third quarter.

Lindale put the lead back up to double digits on its next drive, a 32-yard run by Jenkins on fourth-and-3, and a snap cost the Eagles the extra point. It did push their lead to 41-31.

Kilgore got a 22-yard run from McElyea, then a pass interference penalty on Lindale that gave the Bulldogs a first down at Lindale’s 20-yard-line. A second-down pass to Jermaine Roney failed, and on third down, McElyea gunned a ball to Cade Pippen, who set Kilgore up at Lindale’s 6 with a first down.

Lindale avoided the score on the first two downs, but not on third: a fade to Brian Brown in the end zone. Brown leapt and caught it in the middle of three Lindale defenders, an 8-yard touchdown with 1:14 left in the third quarter, and Kilgore trailed 41-38.

The Bulldogs converted on third and long with a pass from McElyea to Adkins, to midfield, driving with less than seven minutes on the clock. But the drive stalled, and Kilgore elected to punt.

Jenkins came up big, a 74-yard run. Jenkins was caught by Kilgore’s Davin Rider, who covered a ton of ground to make a touchdown-saving tackle at Kilgore’s 18-yard-line, setting up the game’s final sequence.

For Kilgore, Epps ran for 129 yards and a touchdown on 21 carries, and McElyea had 65 yards. He completed 18-of-33 passes for 309 yards, four touchdowns and the two interceptions.

Pippen had two catches for 31 yards and Corey Rider the late-game catch for 19.

Baldazo was 5-for-5 in extra point attempts, and hit his only field goal attempt of the game. Pippen only punted three times, averaging 35 yards a punt, a long of 39.

The Bulldogs finished with 503 yards of total offense.

Defensively for Kilgore, Eli Caruthers finished with 15 tackles, 10 of them solo; Adkins had 10 tackles, eight solo, and the two blocked extra points; Davin Rider had nine tackles, none more impressive than the one where he ran down Jenkins; Brown had eight; Chris Ervin had six; Hunter Lewis, Alex Chavez, and Marcaelin Caraway each had five, Caraway one for loss; and Brantley Propes had five as well and one pressure that forced Peterson into a mistake.

If you'd like to read more about the inductions of coach Ferro and Mr. Bustin into the Wall of Honor, here you go: https://www.kilgorenewsherald.com/sports/ferro-bustin-enshrined-in-wall-of-honor/article_a5ccf57a-2105-11eb-8c2b-53b971ff8631.html