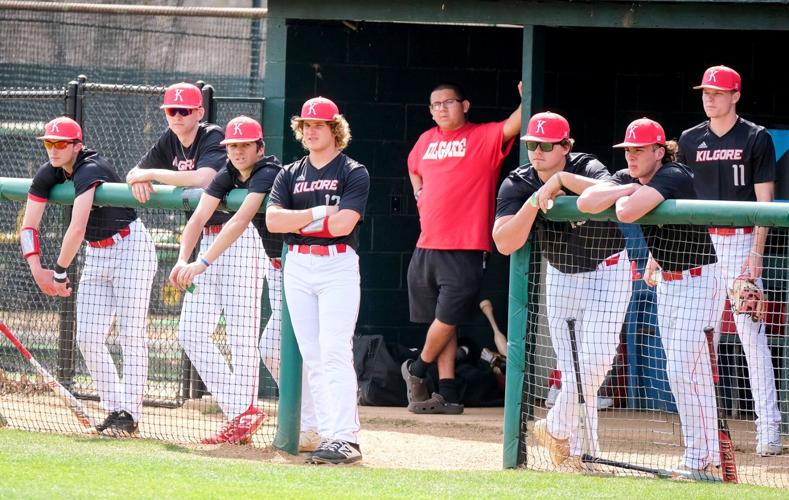 From left: Kilgore’s Matthew Conner, Thomas Hattaway, Bransin Walker, Cason Cox, Edgar Sanchez, Gage Nichols, Heath Lafleur, and Jake Thompson look on from the dugout during an at-bat. The Diamond ‘Dogs are in Marshall today to face Pleasant Grove in game two of the UIL Class 4A playoffs. Sabine and West Rusk are also a part of the high school baseball playoffs; Sabine is in Lindale to face Troup, and West Rusk is in Bullard to meet New Diana. See results tonight on kilgorenewsherald.com. 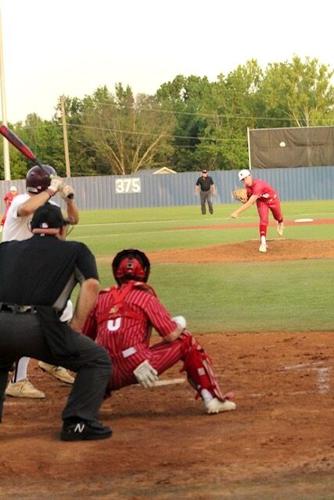 Sabine's Matt Huey (right) delivers a pitch to the plate, to catcher Alex Galyean. The Cardinals shut out Troup Friday night in Lindale, 7-0, to take a 1-0 lead in the UIL Class 3A best-of-three-game series. The series continues this afternoon. 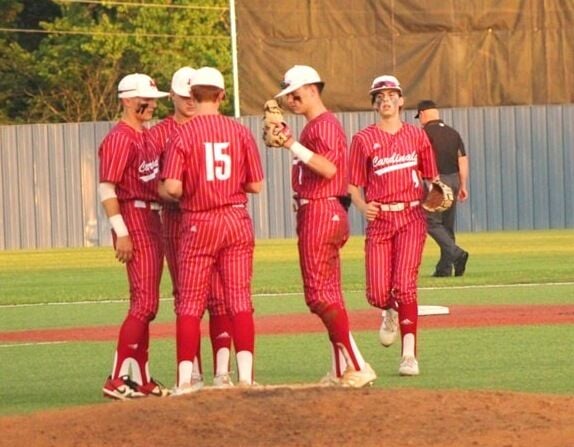 From left: Kilgore’s Matthew Conner, Thomas Hattaway, Bransin Walker, Cason Cox, Edgar Sanchez, Gage Nichols, Heath Lafleur, and Jake Thompson look on from the dugout during an at-bat. The Diamond ‘Dogs are in Marshall today to face Pleasant Grove in game two of the UIL Class 4A playoffs. Sabine and West Rusk are also a part of the high school baseball playoffs; Sabine is in Lindale to face Troup, and West Rusk is in Bullard to meet New Diana. See results tonight on kilgorenewsherald.com.

Sabine's Matt Huey (right) delivers a pitch to the plate, to catcher Alex Galyean. The Cardinals shut out Troup Friday night in Lindale, 7-0, to take a 1-0 lead in the UIL Class 3A best-of-three-game series. The series continues this afternoon.

Kilgore made a late comeback, but when its UIL Class 4A first round baseball playoff series resumes midday today in Marshall against Pleasant Grove, the Hawks will have an advantage.

Sabine won its opening game in a 3A playoff series against Troup, being played in Lindale, a 7-0 Sabine shutout win. But West Rusk didn’t fare as well in a series opener against New Diana in Bullard, an 8-5 loss.

Sabine 7, Troup 0: Matt Huey struck out nine Troup batters, allowing just one hit and helped hold the Tigers in check all night long, as Sabine took a 1-0 lead in the series with a 7-0 win Friday night in Lindale.

The Cardinals jumped out to a 3-0 lead, and had help from Troup’s defense – the Tigers were not playing the most crisp on Friday, and were charged with four errors. Sabine had none.

Sabine had three runs in the first inning, added three more in the sixth, and one in the seventh, all the while holding Troup to a shutout.

Colt Sparks had three hits for coach Michael Mayfield’s Cardinals, who have won 12 of their last 13 games. Sabine had 10 hits in the game, and Jace Burns, Kile Stripland, Caden Richardson each had two. Burns, Sparks, Stripland and Zach Donavan each had an RBI.

Defensively, Sabine was on its game: Huey and Richardson connected for a couple of pick-off plays at first base and Alex Galyean had one, as well, and the Cardinals turned a 4-6-3 double play in the fourth inning – Jadan McPherson at second, Burns at shortstop, and Richardson at first. Richardson also saved a hit from getting in on a low-line play at one point, and Stripland had a running catch of a fly ball near the right field foul line in the contest.

Game two is today in Lindale, a 1 p.m. start, with game three to follow if it’s needed, which would mean Troup would have to win game two.

Pleasant Grove 4, Kilgore 3: Pleasant Grove took a 3-0 lead early in game one on Friday at Maverick Field, increased it to 4-0 on Friday, and then held on for dear life as the Diamond ‘Dogs clawed their way back into the game with a three-run sixth inning. But it was too little, too late for KHS, and Pleasant Grove escaped with a 4-3 win, and a 1-0 series lead.

The best-of-three-game series resumes at noon today, and if Pleasant Grove (20-9) wins game two, the Bulldogs’ season is over. Kilgore (16-10) must win game two to force that deciding third game, which would be played 30 minutes after game two.

Kilgore was the visiting team in game one, and got the game’s lead-off batter, Chris Ervin, on base when he reached on an error. Jason Silvey moved Ervin over on a bunt, but was thrown out, a sacrifice; Todd House grounded into a fielder’s choice, moving Ervin to third, but PG got out of the inning with Ervin stranded there.

The Hawks would plate a couple of big runs in the bottom of the first. With an out already in the books, Clark reached on a fielder’s choice, then scored on a triple by Bearden, who would score on a sacrifice fly by Martin. Heath Lafleur would help get Kilgore out of the inning by striking out Jennings.

Pleasant Grove added run number three in the bottom of the second. Brown managed a lead-off double, and then Halter laid down a bunt and reached on an error that also allowed Brown to score (3-0 PG). Lafleur struck out the next batter and got the third out on a fly out to right field to end the inning, but not before the Hawks took a 3-0 advantage.

They would add one more before the Bulldogs would come to life. Clark would get on when he was hit by a pitch to start the bottom of the fifth, and went to third on an error. He scored on a sacrifice fly by Bearden to give the Hawks their 4-0 lead.

In the top of the sixth, though, Kilgore’s bats woke up. Silvey singled to center field, then Todd House followed with another single that sent Silvey to second. With an out in place, Jake Thompson was hit by a pitch, loading the bases.

Tate Truman came to the plate and grounded into a fielder’s choice, and the Hawks chose to get Silvey at home. Silvey and Truman basically just traded places, but that did give the Hawks two outs on Kilgore – it kept the bases loaded, though, for Lafleur.

Lafleur did not disappoint. The pitcher not only helped his own cause, he crushed it, a 3-RBI triple to right field that scored House, Thompson and Truman, and allowed the ‘Dogs to almost – almost – tie the game. Lafleur was left standing on second, representing the game-tying run. But the Hawks managed to get a strikeout and escape the sixth inning.

The Hawks’ bottom of the sixth went quickly: two fly outs and a strikeout swinging.

The Bulldogs’ final at-bat, in the top of the sixth: back-to-back-to back outs, however, allowing PG to hold on for the win.

Offense was hard to come by: Kilgore had just four hits in the game, PG just six. The Bulldogs hitters: Lafleur’s triple, then two hits by Silvey and one by House. Lafleur had 3 RBI and Silvey had a stolen base.

Lafleur went the distance on the mound, allowing four runs, three of them earned, on 104 pitches over six innings. He allowed six hits, walked two, and struck out seven. Jennings also threw a complete game. In seven innings and 97 pitches, he allowed four runs on three hits, struck out eight and walked two.

The season is over, obviously, for the loser; the winner moves on to round two to get either Kaufman or Van.

New Diana 8, West Rusk 5: Things didn’t go much better for the West Rusk Raiders, who also dropped game one of their UIL Class 3A best-of-three at Brook Hill in Bullard, this loss to New Diana.

Game two begins at 1 p.m. today, with game three to follow if needed, about 30 minutes after game two.

For the Raiders, Will Jackson had three singles. Jimmie Harper had a double. Cole Jackson had a hit and 2 RBI and Jaxon Farquhar had an RBI. Peyton Brewer had a home run, a single and 2 RBI for New Diana, and Hunter Gleason had a triple and an RBI for the Eagles.

The West Rusk-New Diana loser is done for 2022; the winner moves on to get either Winnsboro or Paul Pewitt.

Mitch Lucas is the sports editor for the Kilgore News Herald, and has been since June 1, 2002. He and his wife Jenna have three children. He is a deacon at Highland Park Baptist Church.