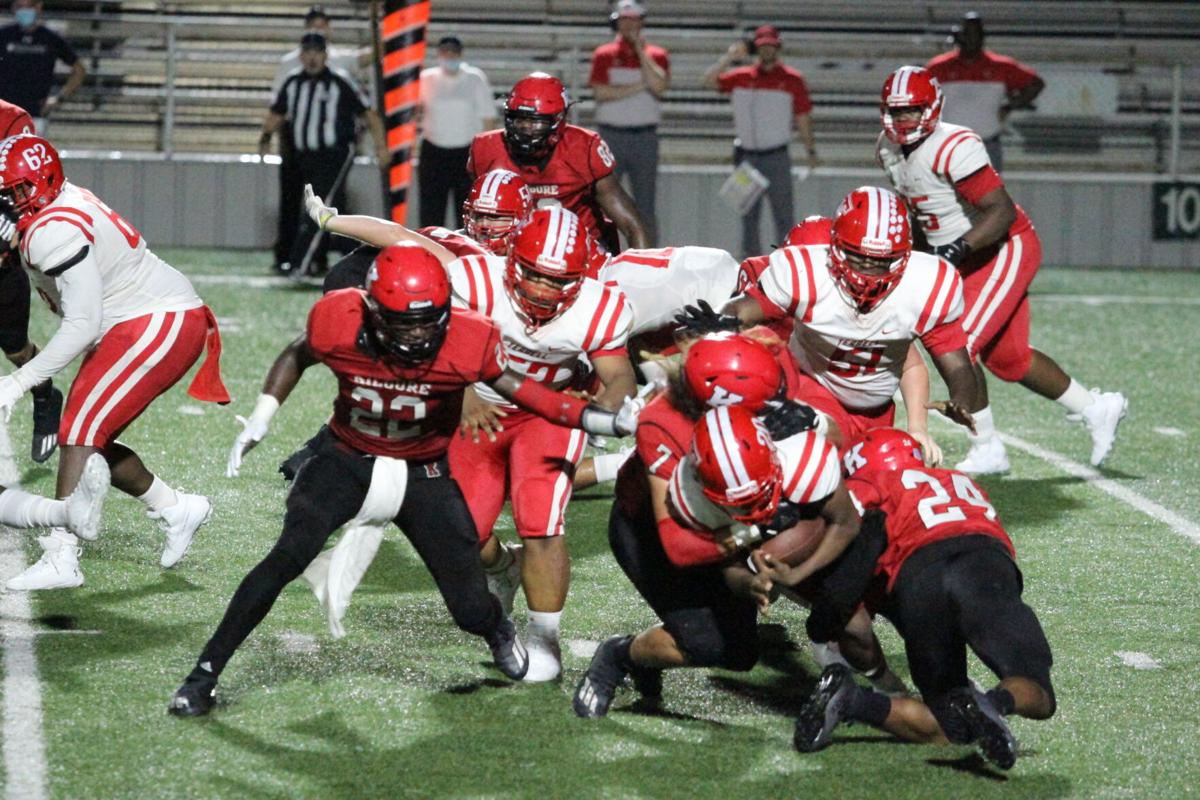 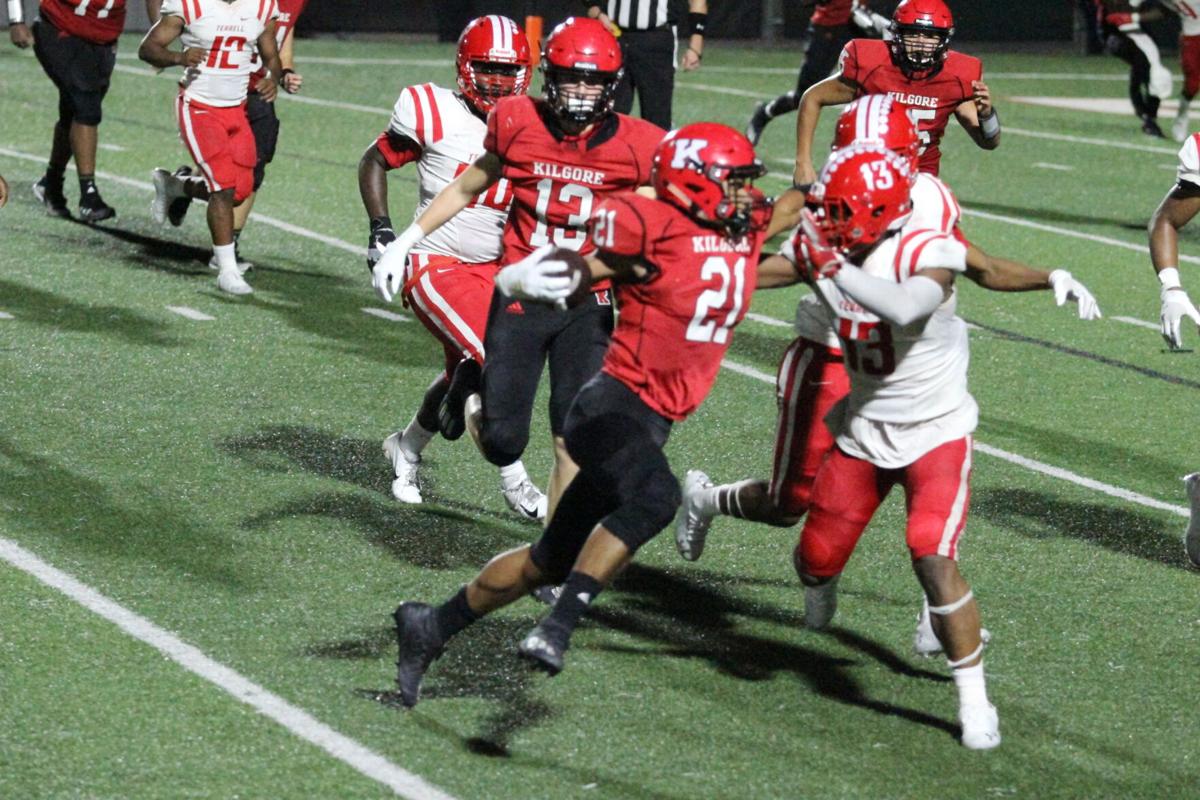 Kilgore running back Tray Epps (21) fights for yards against Terrell. It worked: Epps finished with 200 yards on 20 carries, including a 32-yard touchdown. (Photo by DENNIS JACOBS)

Kilgore running back Tray Epps (21) fights for yards against Terrell. It worked: Epps finished with 200 yards on 20 carries, including a 32-yard touchdown. (Photo by DENNIS JACOBS)

In the first two games of their 2020 season, the Kilgore High School Bulldogs have faced Carthage, the defending state champion and the number one team in Class 4A, and a younger talented Terrell team that tried to put up a fight, but failed.

In short, Kilgore’s first two games were about as different as they could be, but now, the Bulldogs have something to build on.

They’ll try to do just that when they make the trip to Alvarado, out west beneath the Metroplex, this Friday night, a 7:30 p.m. start at Charles Head Stadium, 151 miles away.

Tickets will be on sale this week for the Bulldogs (the visitors), at the athletic office on the high school campus, in the transportation building near the school. There will likely be some stadium restrictions at Alvarado.

For anyone who can’t go, there’s likely a streaming service online, but there for certain will be radio and internet coverage, courtesy of the Ragin’ Red Broadcasting crew, in their 39{sup}th{/sup} year of calling Kilgore games. Check them out on KDOK 105.3-FM in Kilgore, or online at kdokradio.com.

This will be a new opponent for KHS, period: the two programs have never met in football.

Like Kilgore, Alvarado is UIL Class 4A-Division I, the bigger 4A, and their coach is Jeff Dixon. The Indians went 9-3 a year ago, but are off to a rough start so far.

Two quarterbacks have taken snaps for Alvarado this season: West Conner and Tomas Cuevas. Conner is 4-of-16 for 33 yards and two interceptions; Cuevas is 2-of-11 for 11 yards. Neither has thrown a touchdown.

The Indians have ran for 238 yards in two games, led by senior running back William Labermeier, who has 129 yards and a touchdown. Cuevas has the other touchdown, on a 1-yard run.

Punter Jackson Pate has averaged 28 yards a kick on three punts this year. Kicker Dylan Cox hasn’t hit a field goal, but is 2-for-2 in extra point attempts.

Kilgore’s slow start could have had something to do with the level of competition: the Bulldogs were supposed to face Nacogdoches in the first game of the season, but after the UIL put classes 6A and 5A on a COVID-19 delay, Kilgore had to find not only one opponent, but three, to replace Nac, Hallsville and Pine Tree.

They found Carthage, an old rival looking for a season opener. Carthage, led by coach Scott Surratt, has been the pace-setter not just in East Texas, but in all of Texas the last decade, having won seven state titles in that time frame.

Carthage came out against Kilgore on Aug. 28 and made some mistakes – some of that had to do with a solid defensive effort by the Ragin’ Red. But Kilgore’s offense just wasn’t clicking, and even though a 9-yard pass with four seconds left in the first half, from Dalton McElyea to Cade Pippen, brought Kilgore within two scores, they just couldn’t make the comeback.

They did, however, hold a Carthage team to one of their lowest point totals in a while: 27 points.

Last week, though, Kilgore was money, with McElyea, in his second season as a starter, looking like a seasoned quarterback; Tray Epps and the running game clicking; an improved performance by the offensive line; a good kicking game with Chris Baldazo out of Pippen’s hold; and a defensive effort that kept Terrell’s Tigers in check: seven points, 26 yards passing, 135 yards rushing, 161 total yards and just 10 first downs. That same Terrell team had 53 points the week before against Wills Point, courtesy of 491 rushing yards.

Kilgore’s linebackers Brian Brown and Eli Caruthers played like men possessed: Brown had 11 tackles, and Caruthers, 10. Chris Ervin had nine tackles. Alex Chavez had seven tackles on the D-line. Kaden Kenney, at defensive end, had five tackles, a forced fumble and a quarterback hurry, and Brantley Propes, also a defensive lineman, had maybe his best game as a varsity player: five tackles and a sack.

Corey Rider had an interception for the Bulldogs.

Epps must have winced all week, thinking about the Bulldogs’ running game against Carthage, because he took it out against Terrell. Epps, held to 48 yards against Carthage, had 200 yards on 20 carries against Terrell, and a 32-yard touchdown. Jermaine Roney had 28 yards and a score against the Tigers, and Davin Rider didn’t score, but had a 23-yard run that would have made a college running back proud that set up one of Kilgore’s scores.

McElyea went 10-of-13 for 109 yards and a touchdown to Brian Brown. The Bulldogs built a big lead by the fourth quarter and promising sophomore Damarion Van Zandt came in for a short time late. He was 0-for-2 in pass attempts, but those were his first varsity snaps.

Brown had two catches for 39 yards and the touchdown. Roney, showing his versatility, had four for 18 yards. Pippen had two for 8 yards. Rider had one for 11 yards, and Donovan Adkins, the Bulldogs’ spectacular defensive back / kick returner, had a catch for 33 yards.

Baldazo went 2-for-3 in extra points, and had two field goals: a 22-yarder and a 40-yarder. Pippen punted just three times, a break after several punts against Carthage.

The Bulldogs finished with 362 yards of total offense.

Kilgore is led by coach Mike Wood, in his 11th season as head coach. The Bulldogs are 75-49 under Wood.

Up next for Kilgore will be the 2020 homecoming game, with Gladewater coming to town next Friday night, Sept. 18, and then the Bulldogs open their District 9-4A, DI schedule with a road trip to Palestine on Friday, Sept. 25.