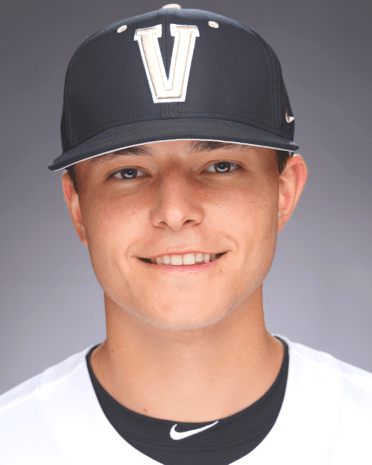 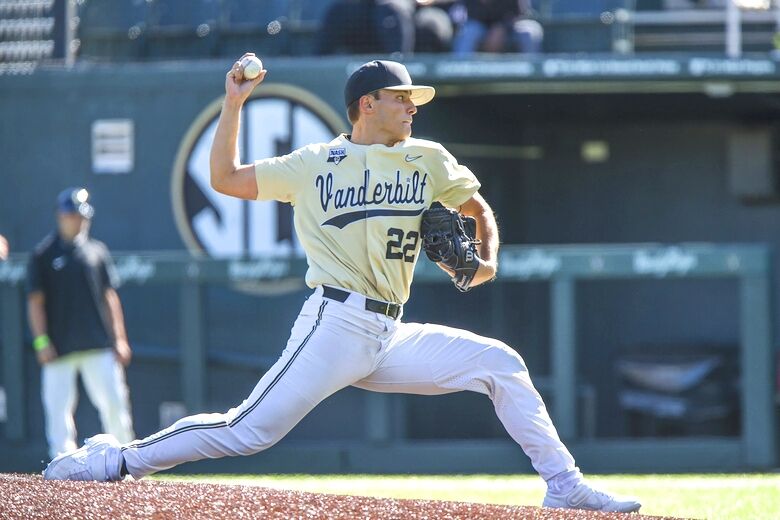 Vanderbilt’s Jack Leiter (above), the son of former Major League Baseball all-star Al Leiter, was drafted by the Texas Rangers with the second overall draft pick. Leiter helped Vanderbilt back to the College World Series this year.

Vanderbilt’s Jack Leiter (above), the son of former Major League Baseball all-star Al Leiter, was drafted by the Texas Rangers with the second overall draft pick. Leiter helped Vanderbilt back to the College World Series this year.

The Pittsburgh Pirates opened the amateur draft with a Louisville slugger. And that freed up the Texas Rangers to grab another famous baseball name at No. 2.

“Fired up,” said Davis, wearing a Pirates hat and jersey moments after his on-stage introduction by Commissioner Rob Manfred. “Ready to go, ready to get to work. Super excited.”

The Houston Astros weren’t allowed to pick until round three, as a portion of punishment from the sign-stealing issues just over a year ago.

They selected outfielder Tyler Whitaker with their first pick. Whitaker, who has also played the infield, was selected as the 87th overall pick). Whitaker is a 2021 graduate of Bishop Gorman High School in Las Vegas, and is ranked 37th on MLB.com’s Draft Prospects list.

Manfred announced the choices from Denver’s Bellco Theater. Major League Baseball moved the draft from its longstanding June slot to July’s All-Star festivities in an effort to better showcase its future stars.

Davis has big power and an even bigger arm, throwing out 46 percent of would-be basestealers to become a finalist for the Buster Posey Award as college baseball’s best defensive catcher.

He batted .370 and led the Cardinals with 15 homers, and his .482 on-base percentage was best in the Atlantic Coast Conference.

“I want to win, a competitor,” Davis said. “I’m going to do everything I can to help this organization get where it needs to be.”

The Rangers grabbed Leiter with the second pick, taking a right-hander with a mid-90s fastball and two overpowering breaking pitches. His repertoire could play near the top of a big league rotation. He was 11-4 with a 2.13 ERA with the Commodores, including a no-hitter against South Carolina, and struck out 179 in 110 innings.

Leiter watched the draft at home with his parents. Al Leiter, who pitched 19 seasons in the majors, said he was elated and “kind of weepy” hearing his son’s name called.

“It’s really hard to put into words,” Jack Leiter said. “I’m just so happy I was able to have my family and friends and people that care about me all here to celebrate with.”

This was Texas’ first pick under first-year general manager Chris Young, a longtime big league pitcher who came to the organization determined to help the farm system better develop pitching. Leiter was at the top of the Rangers’ board.

“Jack is someone we’ve zeroed in for a while,” Young said. “He fits everything we’re trying to accomplish as an organization.”

After MLB slimmed the draft from 40 rounds to five last year in response to the coronavirus pandemic, this year’s event will go 20 rounds spread over three days.

The draft opened Sunday night with the first 36 selections. Fans were allowed to watch the event in person for the first time, and a smattering of onlookers booed loudly each time Manfred took the stage. Previous drafts were held at MLB Network’s studio in Secaucus, New Jersey, which only had room for media and small groups of friends and family.

Fans stood and cheered when Davis’ name was announced. He hugged friends and family before making his way to the stage, where he was handed a Pirates hat and jersey and shook hands with Manfred.

The Pirates picked first overall for the first time since taking Gerrit Cole in 2011, by far the most successful of their four previous No. 1 selections. Their other top picks were infielder Jeff King (1986) and right-handers Kris Benson (1996) and Bryan Bullington (2002).

In a year without a consensus top pick, Pittsburgh general manager Ben Cherington said his club decided on Davis on Saturday night. His scouts were impressed not just by Davis’ abilities, but also his eagerness to learn and hunger to improve.

“He checks a lot of boxes,” Cherington said. “We’ve had a lot of fun getting to know him.”

The first pick has a slot value of an $8.42 million signing bonus. The deadline for players to sign is Aug. 1 at 5 p.m. EDT.

The Detroit Tigers went with Oklahoma high school pitcher Jackson Jobe at No. 3, a year after taking Arizona State slugger Spencer Torkelson with the top pick.

The draft was to conclude on Tuesday with rounds 11-20.