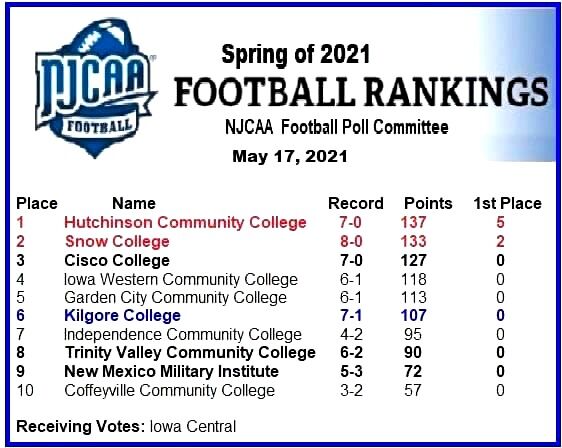 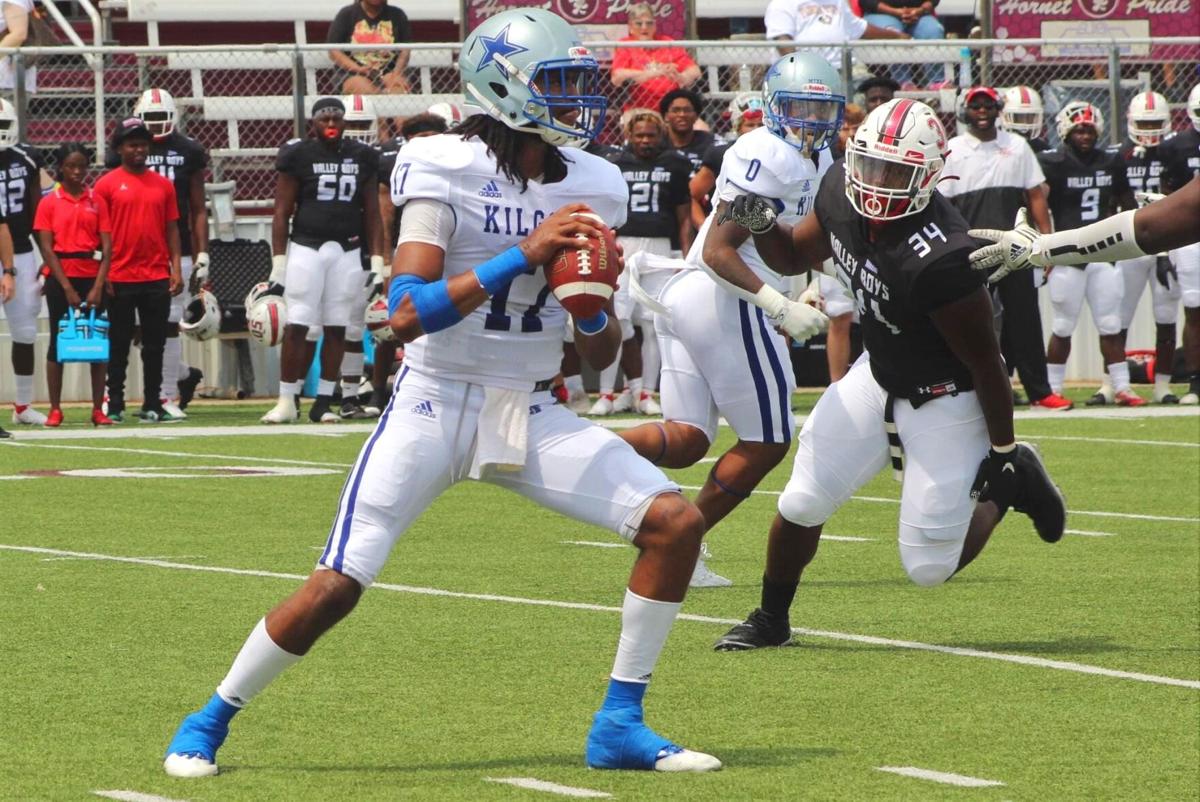 Kilgore College quarterback Malcolm Mays (17) looks to pass against Trinity Valley last Saturday, as the pass rush closes in. Mays and the Rangers beat TVCC, 40-36, and finished the season 7-1, ranked sixth in the nation. KC will play its 2021 season this fall, as normal.

Kilgore College quarterback Malcolm Mays (17) looks to pass against Trinity Valley last Saturday, as the pass rush closes in. Mays and the Rangers beat TVCC, 40-36, and finished the season 7-1, ranked sixth in the nation. KC will play its 2021 season this fall, as normal.

It wasn’t an extra season, it was just played late, and as it turns out, Kilgore College football came through it almost unscathed and still is one of the nation’s top junior college programs.

The Rangers’ 2020 football season was played entirely in spring, 2021, and ended Saturday in Athens with a win over Trinity Valley, and it took almost every single second.

The Rangers, hanging on by four points with home-team TVCC driving and just seconds left, made their own break, as defensive back Oscar Moore intercepted a pass in the end zone, ending the threat and the game, as KC won, 40-36.

That was the final game of the season, an eight-game schedule largely in the Southwest Junior College Football Conference. The Rangers, coached by Willie Gooden, were ranked sixth in the nation going into the game; Trinity Valley had been ranked seventh.

KC kept that ranking. The NJCAA released its final poll on Monday, and the Rangers – who finished the eight-game slate with a 7-1 record – are sixth. There will be another poll following the national championship game, which will pit top-ranked Hutchinson (Kan.) against Snow College (Utah) at War Memorial Stadium in Little Rock, Ark., on June 5. That game will air on the CBS Sports Network.

After those top two, it’s KC rival Cisco at third, Iowa Western at fourth, Garden City (Kan.) at fifth, the Rangers at sixth, Independence (Kan.) Community College at seventh, TVCC down a spot to eighth after the loss, New Mexico Military – another SWJCFC member – at nine, and Coffeyville (Kan.) at 10.

The NJCAA plans to play the 2021 season as normal, starting in late August, with all teams.

The Rangers’ final game was a back-and-forth affair. KC got on the board first with a 41-yard touchdown run by Garrison Johnson. TVCC tailback Cordrick Dunn tied the game, though, on Trinity Valley’s next possession.

A punt blocked out of the end zone gave KC a 9-7 lead at the beginning of the second quarter, but again the lead swung back, when the Cardinals’ Jordan Davis scored on a 21-yard pass from Matt Morrissey (14-9 TVCC).

Momentum switched again with five minutes left in the half, when Mays and McCoy connected for the first time in the game, a 41-yard touchdown pass. KC was in front again, this time 15-14, and then each team added a field goal – Tristan Driggers hit KC’s as the first half clock ran out. The Rangers took an 18-17 lead into the half.

The see-saw continued in the third quarter. Christopher Esqueda reclaimed the lead for TVCC (20-18), but the Cardinals lost it again on KC’s next possession, when Kilgore High School alum Kennieth Lacy got into the end zone on a 2-yard run (25-20 KC).

Each team would score again in the third quarter: the Cardinals got an 8-yard touchdown run from Korey King, and then Brandon Webb caught a pass from Mays near the line of scrimmage, and burst free for a 33-26 lead.

Things tightened up in the fourth quarter, and it looked like Trinity Valley was pulling away, honestly. Cam Camper grabbed a pass from Morrisey, a short pass (6 yards) but a touchdown nonetheless, and then the Cardinals added another score on a 33-yard field goal. With just more than 6 1/2 minutes left to play, TVCC was up 36-33, a flimsy lead at best.

KC took the ball on the kickoff, and Mays and McCoy – who has developed a knack for big plays – made their 80-yard touchdown connection, giving the Rangers the lead for the final time. Morrissey did get the Cardinals near the Rangers’ end zone, but the Cards called a trick play where Morrissey was to catch a pass. Moore sniffed it out, picked off the pass and sealed the win.