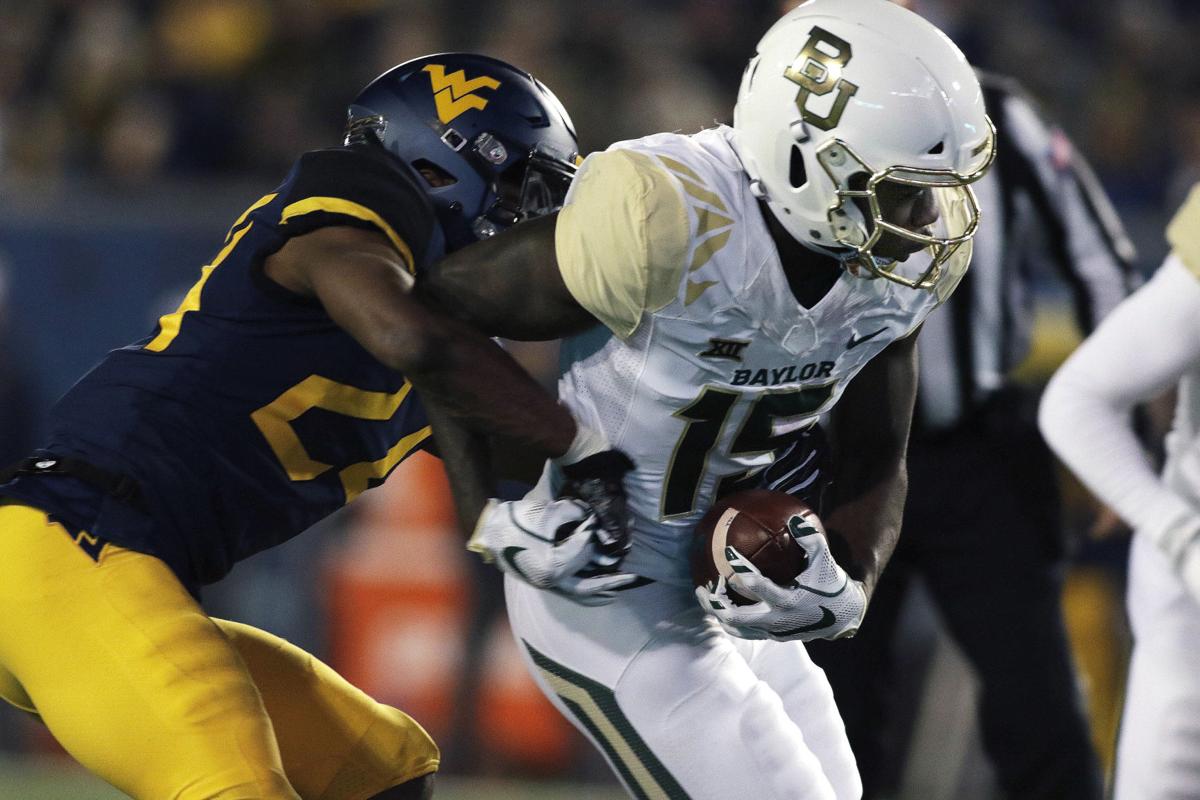 Baylor wide receiver Denzel Mims (15) is tackled by West Virginia cornerback Hakeem Bailey (24). Mims, who is from Daingerfield, is expected to be selected in this weekend’s NFL Draft. (AP photo by RAYMOND THOMPSON) 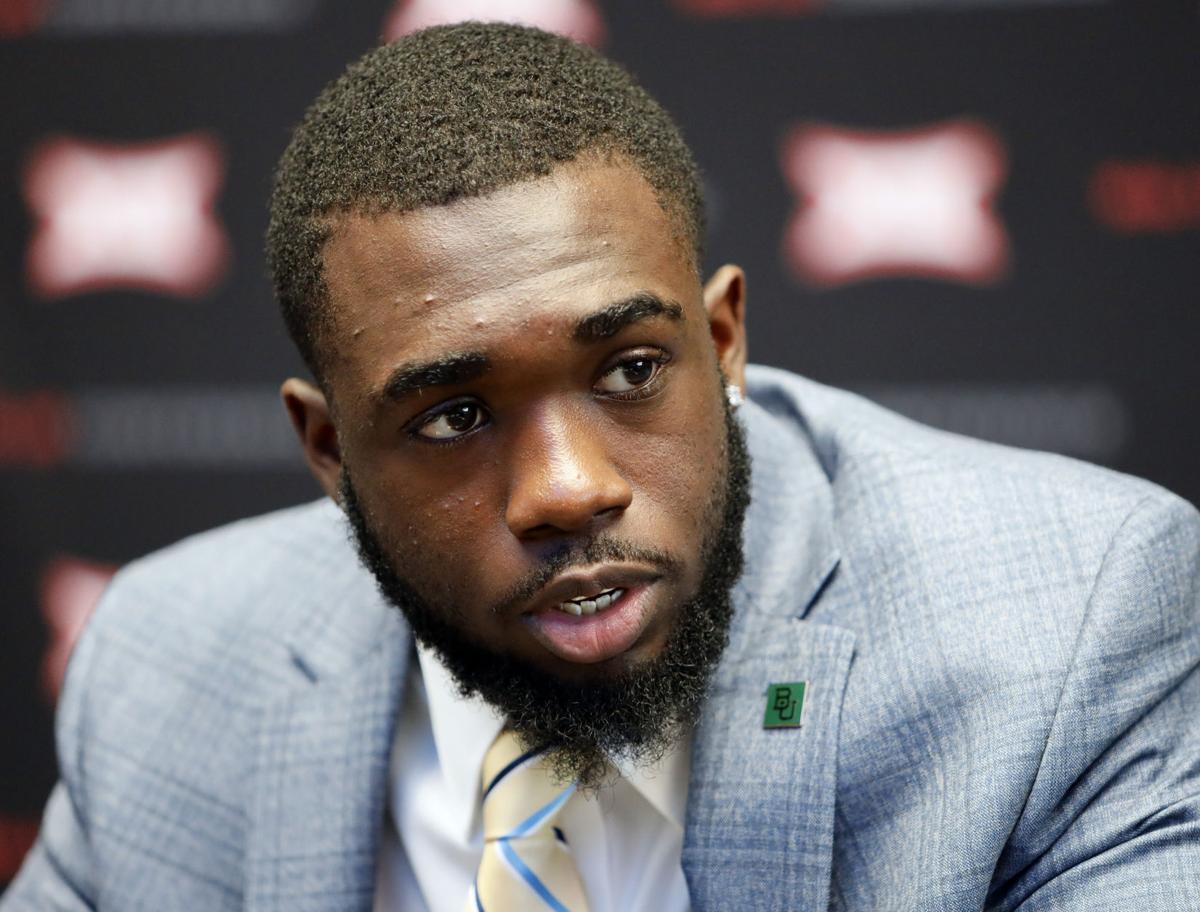 Baylor wide receiver Denzel Mims (15) is tackled by West Virginia cornerback Hakeem Bailey (24). Mims, who is from Daingerfield, is expected to be selected in this weekend’s NFL Draft. (AP photo by RAYMOND THOMPSON)

EDITOR’S NOTE: While Daingerfield isn’t in the News Herald’s coverage area, DHS standout Denzel Mims is an East Texan expected to be selected in the NFL Draft, which begins Thursday on ESPN; we simply thought this might be of local interest.

It was nine games into Denzel Mims’ freshman year at Daingerfield when he found his true calling.

The Tigers were locked in a rain-soaked quagmire that Friday evening in 2012 at Mickey Mayne Stadium against Mount Vernon.

Mims was busy handling the offensive controls at quarterback for the Tigers, but the offense simply wasn’t making any headway. That’s when second-year head coach Aric Sardenia made the call that forever changed it all.

“We knew the talent Denzel had and we needed to exploit him in a lot of different ways. We put him at quarterback because he had good leadership even as a freshman,” Sardenia recalled. “We were playing a pretty sloppy football game against Mount Vernon and I told the coach to move him out to receiver. We just needed a spark.”

A spark is just what Mims provided as he reeled in an 80-yard TD on his initial snap and Daingerfield went on to a 45-17 win over Mount Vernon.

The rest, as they say, is history. A receiver was born.

Mims transformed himself into one of the best all-around high school athletes in Texas over the next three seasons and eventually parlayed that into a scholarship from Baylor University.

Mims now finds himself in the conversation as a potential late first round or early second round pick in Thursday’s NFL Draft.

“Denzel was a tremendous talent and he was every bit as good a defensive back as he was a receiver. It was just a matter of figuring out where his fit was the best,” said Sardenia, who is now head coach at Alief Elsik in Houston.

“He could have gone to college at safety and been in line to be a first round draft pick at safety. He had the ability to do it all. But, ultimately, we wanted him to have the ball in his hands as much as possible.”

Mims finished his senior year at Daingerfield in 2015 with 721 yards on 31 receptions and 15 TDs. Recruiting services had him listed at three stars and rated as the 68th wide receiver in the state.

After a modest freshman year at Baylor with just four receptions for 24 yards, Mims flourished his sophomore season with 1,087 yards on 61 catches and eight TDs. His efforts that year earned him second team Big XII accolades.

While his numbers dipped just a little as a junior, Mims completed his senior campaign with a career-best 66 grabs for 1,020 yards and 12 TDs. Mims would earn first team All Big XII honors this past season.

It was at the NFL Combine in late February, however, where Mims truly turned the heads of NFL scouts. His performance in Indianapolis greatly improved his stock and placed him among the pass-catching elite in the 2020 draft class.

“I feel I performed well. I think I did a good job,” Mims said of his combine showing. “I was a little nervous at first, but that didn’t last long. After my run in the 40, which was the best part of the combine for me, things really seemed to settle down.”

Mims, who clocked a combine 4.38 in the 40, is listed among the top 10 pass catchers in a draft field that is absolutely loaded with talent this year.

After interviewing with upwards of 20 NFL teams while in Indy, Mims has had several followups since his return to Waco.

The COVID-19 forced the cancellation of his Pro Day at Baylor and his subsequent interviews have taken place via Zoom and Skype.

Quite confident in his abilities, and justifiably so, Mims believes he takes a backseat to nobody in a deep field of talented pass catchers.

“The interviews have gone great. Most of the questions asked have been to perceive my football knowledge,” Mims explained. “I’m driven to be the best. I want to be the best receiver in this draft class and I’m out to prove that.”

Many draftniks believe Mims, with his 6-3, 210-pound build, passes the eye test, His tall, slender frame along with tremendous straight-line acceleration make Mims a potential matchup nightmare for cornerbacks.

“Physicality ... all day, any day,” Mims responds without hesitation. “Some team is gonna get a player that lines up and gets after it.”

Mims, who lists NFL Hall of Famer Randy Moss as an all-time favorite, has the same ability Moss had stretch a field and win the 50/50 balls at a 90/10 rate.

“The NFL is something I’ve been focused pretty much since I stepped on campus. I stayed for my senior year because I didn’t want to leave with any regret,” said Mims.

“Whoever drafts me is gonna get a player that’s tough, physical and will do whatever it takes to help the team win. I’m competitive and I’m not a selfish guy.”

Mims, like so many others across the country, will be tuned in Thursday night for the opening round of the NFL Draft. He’ll be sharing in the moment with about a half dozen family members, careful to keep in mind social distancing precepts.

“If I go in the first round it’s gonna be on TV. We’ll have the cameras set up. But I’m not gonna worry about. It’s something I can’t control. I do think it’s gonna be a good day,” Mims said.

George Whitley is a sports writer at the Longview News-Journal.