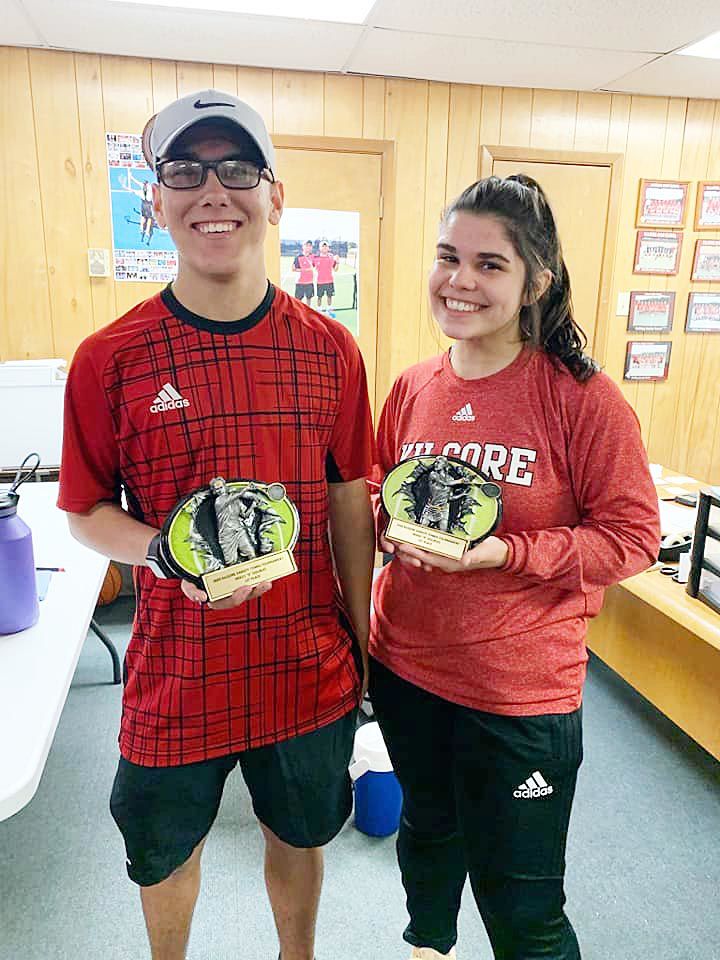 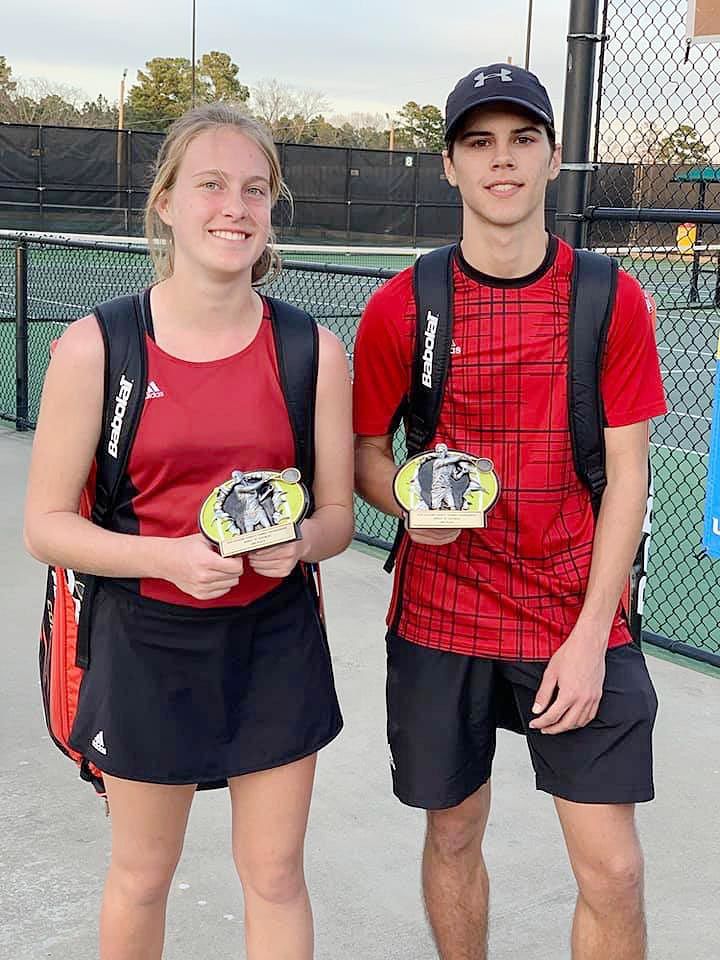 Mary Bess Mercer and Kelton Kelley finished second in the mixed doubles A division last weekend in Kilgore's home tournament. The Bulldogs tennis team is slated for a tournament in Tyler this weekend.

Mary Bess Mercer and Kelton Kelley finished second in the mixed doubles A division last weekend in Kilgore's home tournament. The Bulldogs tennis team is slated for a tournament in Tyler this weekend.

Spring has started for KHS; Tyler tourney next

The spring season – technically the second tennis season of the 2019-20 school year – has started at Kilgore High School, who hosted their own tournament last Friday.

Samantha Linkinhoker and Hunter Wilcox took the championship in the mixed doubles B division, and Mary Bess Mercer and Kelton Kelley finished second in the mixed A.

Kilgore placed fifth overall as a team, out of 16 teams. Not a bad first outing, coach Jason Maroney said.

“Pretty good for us,” he said, “considering some of our top players were not able to play this tournament, due to some other school events.”

Estrella Chavarria represented the Bulldogs in girls singles A, and won her first matchup, 8-0, over Pine Tree’s Jaris Phu. Chavarria lost in the second round. Teammate Jayden Jones did the same, beating first-round opponent Allison Rivera of Henderson, 8-4, before losing in the second round.

In the girls A doubles, Madalynn Parrymore and Avery LeMaire won their first-round match, but lost in the second round to a team from Wills Point.

Recently, the Bulldogs competed in Jacksonville, and Jack Tyra and Kalen Ray were able to keep their doubles record perfect for the year, winning the boys doubles A division. Mercer and Kelley won the mixed doubles A, and Linkinhoker and Hunter were third in mixed B. LeMaire and Parrymore won the consolation title in girls doubles A.

In the immediate, the ‘Dogs are scheduled to play in a tournament at Tyler on Friday, and then in the annual Eastman Tournament in Longview next Friday, Feb. 21.

KC washed out until Monday

Unless there are games rescheduled – and it didn’t appear that way at press time for this edition of the News Herald – all the wet weather and mild storms have washed out the Kilgore College softball schedule for this week.

Games that had been scheduled against Jarvis Christian (on Tuesday) and at Hill College in Hillsboro (today) were both canceled, and coach Leslie Messina’s Rangers aren’t technically scheduled to be in action again until next Monday, Feb. 17, at North Central Community College in Gainesville.

If that changes, there will be an update on kilgorenewsherald.com.

The Rangers have had quite a few schedule changes this season, primarily due to the weather.

KC is 1-4 on the season so far, most recently dropping both games of a doubleheader against Grayson on Sunday. Currently, the Rangers are in tune-up mode: Region XIV Conference play actually doesn’t begin until Saturday, Feb. 22, a home date against Lamar-Port Arthur.

Dansby team to be recognized at state

The 1970 Kilgore Dansby school basketball team that reached the state tournament that year will be recognized at this year’s UIL State Basketball Tournament, the weekend of March 12-14 at the Alamodome in San Antonio.

Dansby lost to Jacksonville Douglass that year, at the State PVIL Basketball Tournament, and both teams will be recognized at this year’s state event at the Alamodome.

Robert Brown, the board chairman of the Prairie View Interscholastic League Coaching Association, is asking anyone who played on the Dansby team that year to get in touch with him. Brown can be reached by e-mail at pvilca1940@yahoo.com, or at (281)777-0576.