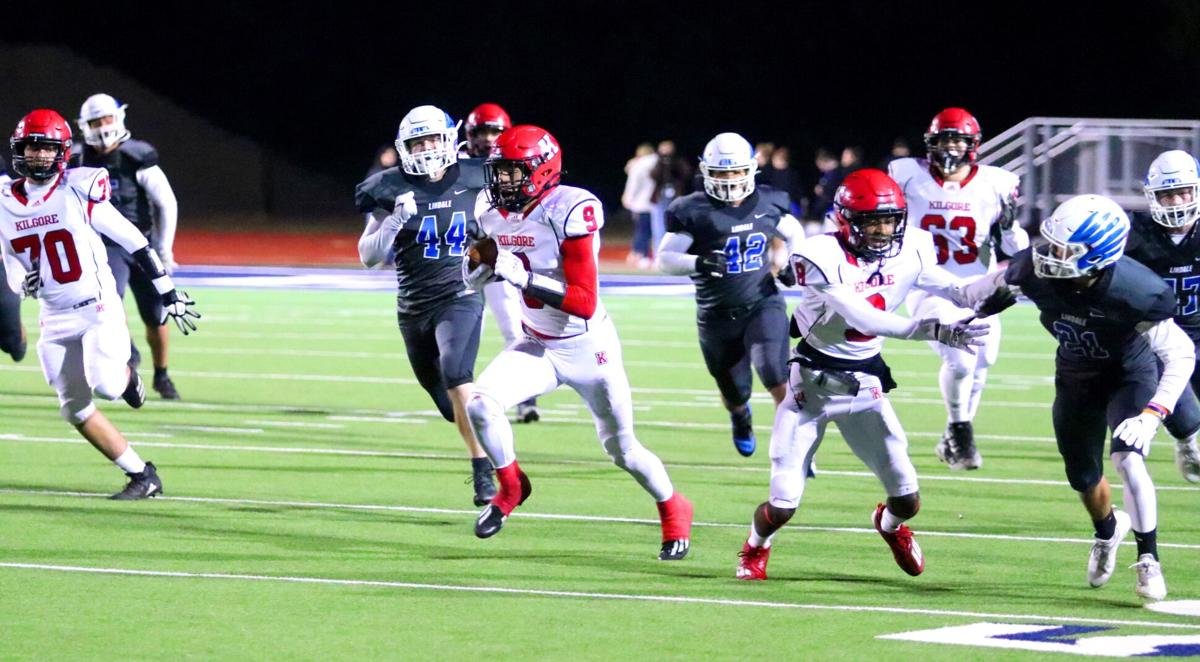 Kilgore running back Davin Rider (9) bursts free through Lindale’s defense, in Friday night’s battle for the District 9-4A, Division I championship in Lindale. Kilgore won, 65-58. Below: Kilgore’s Omarion Smith (10), Chris Ervin (22), and Peyton Christian (24) smother a Lindale ball-carrier. The Bulldogs (9-1) start the 4A playoffs next week; see details now on kilgorenewsherald.com. 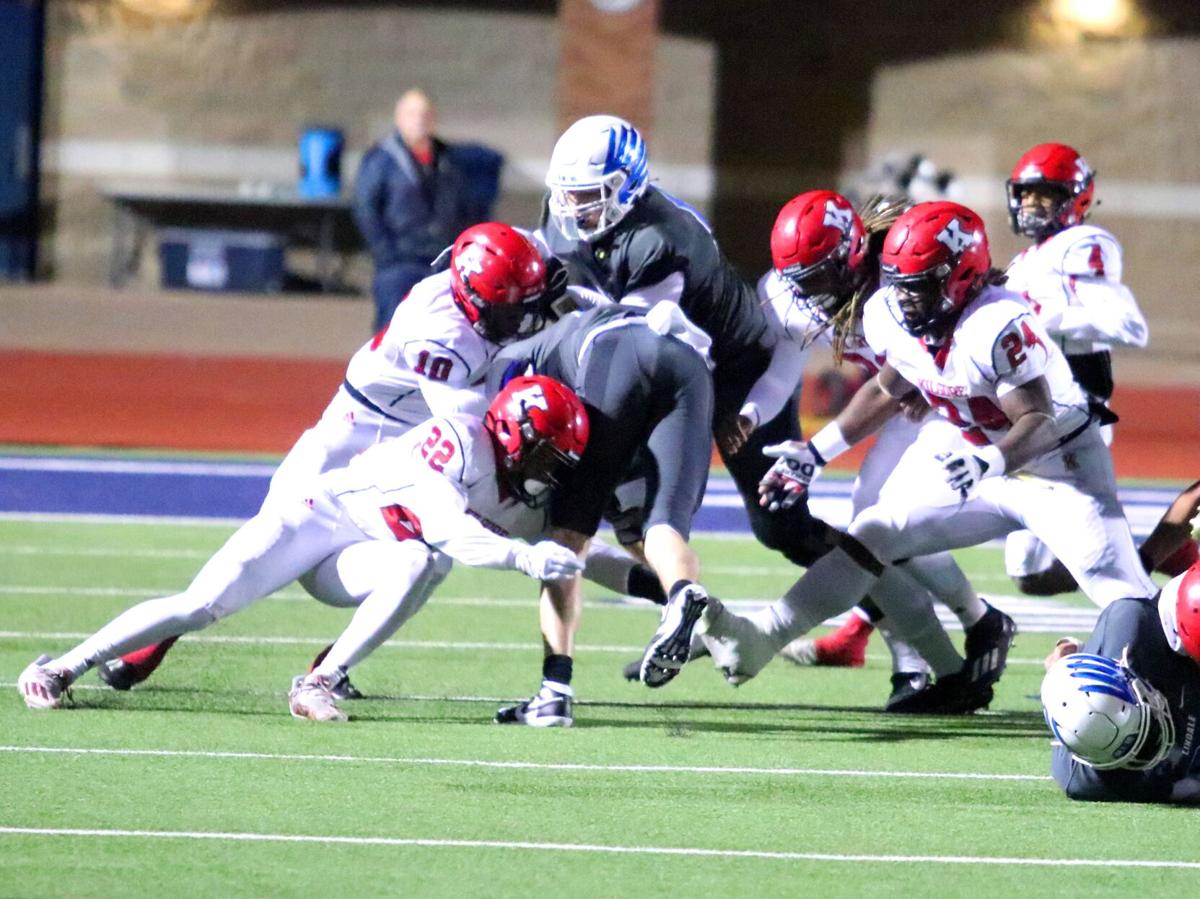 Kilgore running back Davin Rider (9) bursts free through Lindale’s defense, in Friday night’s battle for the District 9-4A, Division I championship in Lindale. Kilgore won, 65-58. Below: Kilgore’s Omarion Smith (10), Chris Ervin (22), and Peyton Christian (24) smother a Lindale ball-carrier. The Bulldogs (9-1) start the 4A playoffs next week; see details now on kilgorenewsherald.com.

LINDALE – For one night only, District 9-4A, Division I turned into the Big 12 Conference, with touchdowns right and left and its two best teams battling for the championship.

And in the end, with the temperature much colder, it was coach Clint Fuller’s Kilgore High School Bulldogs claiming the district championship, in Fuller’s first season.

In a wild game that saw KHS running back Davin Rider score five touchdowns and make two interceptions on defense, and kicker Chris Baldazo hit a 45-yard game-clinching field goal as Kilgore held off Lindale, 65-58, a championship win. Rider finished with 319 yards, the fifth-best single-game rushing total in the history of Kilgore football.

The Bulldogs (9-1) will be the number one seed in 9-4A, DI, and will once again face Huffman-Hargrave, as they have a handful of times in recent years, most recently last year. Kilgore will play Huffman-Hargrave to open the playoffs this coming Friday night in Crockett, a 7:30 p.m. kickoff.

As for Kilgore, It was wild all night at Lindale’s Eagle Stadium, bouncing back and forth, multiple lead changes and a game where neither team would give in; it was the third game between the two since October, 2020.

With Kilgore leading 42-35 at the start of the second half, Jermaine Roney took the kickoff back 88 yards for a touchdown, giving the Ragin’ Red a 48-35 lead; the extra point was missed.

Rider, who could not be stopped (literally) all night out of the backfield, had an interception, but Kilgore couldn’t capitalize on it, and Lindale got the ball back, scoring again on an 18-yard pass to Alford. That brought Lindale within six, 48-42.

Kilgore’s Ross scored on a pass on the Bulldogs’ next drive, a 67-yard play that gave the ‘Dogs a 55-42 lead, and then after yet another score by Lindale to Alford, Zaylon Stoker – who had a big play later – blocked the extra point.

The game remained close. Rider had another touchdown, then an interception, and then the big one: Fuller made the call for Baldazo to kick a 45-yarder. He had missed a 37-yarder earlier, but hit that 45-yarder – now a career long – that gave the Bulldogs a 10-point lead, 65-55, a cushion, finally a cushion.

Stoker intercepted a wide receiver pass at midfield with just over four minutes left, allowing Kilgore to run some clock. Rider reeled off a 14-yard run, taking the clock under three minutes, with the Bulldogs still holding a 10-point lead.

Kilgore did have to give the ball back to Lindale late, but with no 10-point play in the playbook, Lindale elected to kick (and hit) a 38-yard field goal. That made it 65-58 Kilgore.

Lindale perfectly executed an onside kick, and got the ball at Kilgore’s 44, with four seconds left.

Peterson threw a Hail Mary that was intercepted by Matthew Tyeskie, and the horn sounded to end the game. Kilgore held off the Eagles to deliver the City of Stars another district championship.

The tone of the game was set early.

Lindale came out on its first drive and managed an 18-play, 81-yard drive that ended with points, a 1-yard run by Nashad Lee. That would be the first of the opening of the floodgates, a back-and-forth that would lead to a HALFTIME score of Kilgore 42, Lindale 35.

Isaiah Ross had a 40-yard run on Kilgore’s first possession, setting Rider up for his first touchdown of the night, from 3 yards out to tie the game at 7.

That would be the theme of the game.

Kilgore forced a punt on Lindale’s next drive, and Rider scored touchdown number two, a 52-yard run that put KHS up 14-7, starting the second quarter.

And that’s when things got wild.

Lindale quarterback Sam Peterson hit Patrick Daniels for a 42-yard gain, and Peterson himself scored on a 22-yard run to tie it up at 14.

Kilgore scored on the very next play from scrimmage, Rider again on a 67-yard touchdown run, and put Kilgore back up, 21-14.

Peterson hooked up with Judson Long on a 36-yard pass, as the free-for-all continued, giving Lindale first-and-goal at the 6. Peterson would get the score three plays later, a 1-yard run, to tie it again.

It wouldn’t change. Rider reeled off a 25-yard run on first down, Kilgore quarterback Da’Marion Van Zandt hit Jermaine Roney for a 26-yard gain down to Lindale’s 20, and after a holding call moved the Bulldogs back 10 yards, the two connected again, with Roney going in on a 30-yard pass. Baldazo, who hit all but one of his extra points on the night, was good again, and with 5:35 left in the half, Kilgore had a 28-21 lead.

Clint Thurman added a 2-yard touchdown run for Lindale to tie it again; Rider shoved a kid down on a run to the outside and scored on a 33-yard touchdown to go back up, 35-28, and then Lindale scored on a 37-yard pass from Peterson to Jacob Seekford. That tied it again at 35.

Kilgore would have one more first-half touchdown: a 29-yard pass from Van Zandt to P.J. Wiley, with 57 seconds left. Kilgore forced the Eagles to punt, and it appeared the Bulldogs would kneel the clock out with less than 30 seconds left. But Van Zandt hooked up with Tyeskie and got Kilgore within field goal range, missing as time ran out.

Now for some numbers.

Also against Lindale Friday night, Ross finished with 74 yards on nine carries and Kilgore had 388 total rushing yards in the game.

Van Zandt was as calm in the pocket as ever. He hit 9-of-14 passes for 229 yards, three touchdowns and no picks. Roney was lights-out: four catches for 145 yards, and two touchdowns, and the 88-yard kickoff return for a touchdown to open the second half. Tyeskie had three for 43 yards, and Wiley had two for 41, including the touchdown.

Baldazo wound up kicking nine extra points and hit eight of them. His field goal wasn’t the longest in Kilgore history (that’s a tie: Daniel Chappell hit a 54-yarder in 1997 and Danny Beets hit another 54-yarder in 2000), but it was quite possibly the play that broke Lindale’s spirit, giving Kilgore a two-score lead.

Defensively for KHS, there were some impressive numbers, even with the high score. Chris Ervin, who leads Kilgore in tackles this season, stayed true to form: Ervin finished with 12 tackles. Kendall Dunn had eight, and Tyeskie had seven. Zaelen Matthews had six, as did Rider, with his two interceptions.

Peterson completed 28-of-37 passes for Lindale (one incomplete pass, Smith’s interception, was thrown by a wide receiver). The Eagles finished with 382 passing yards, 152 rushing yards, 534 total yards, and still it didn’t feel like Kilgore played poor defensively – they played bend-but-don’t-break defense and wound up with four interceptions and most importantly, a win.