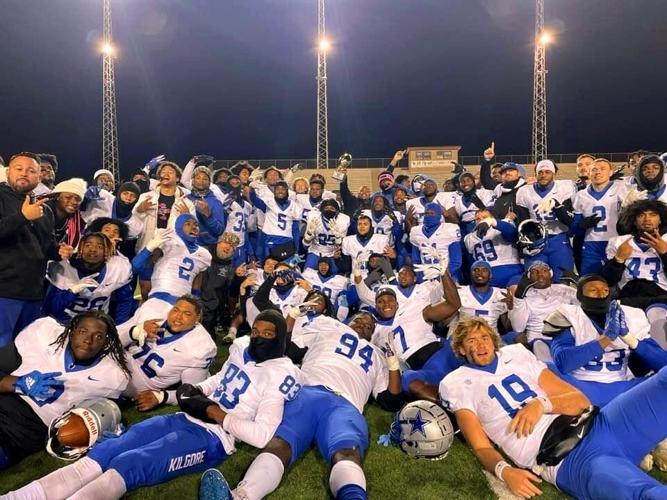 The 2022 Kilgore College Rangers, who ran the table at the end of their schedule and claimed the Southwest Junior College Football Conference Championship, beating New Mexico Military Institute on Saturday, November 19, at Roswell, New Mexico, 39-12, to claim the title. New Mexico Military was the defending conference and national champion. 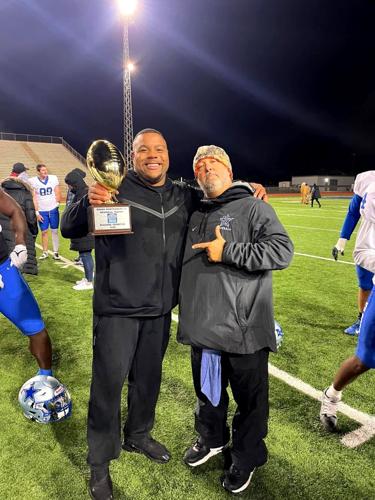 The 2022 Kilgore College Rangers, who ran the table at the end of their schedule and claimed the Southwest Junior College Football Conference Championship, beating New Mexico Military Institute on Saturday, November 19, at Roswell, New Mexico, 39-12, to claim the title. New Mexico Military was the defending conference and national champion.

Weeks ago, there was strong doubt whether the Rangers would even get into the conference playoffs, let alone have any chance at winning.

And now, as unlikely as it was going in as the number four seed, the Rangers are holding the conference title, and will go to a bowl game.

Coach Willie Gooden and his team had to climb a difficult ladder to do it, but finished that climb Saturday night in Roswell, N.M., at the Wool Bowl, upsetting defending conference and national champion New Mexico Military Institute, 39-12, to win the SWJCFC Championship.

KC is 8-3 on the season, and have accepted a bowl bid.

The Rangers, ranked No. 7 in the final NJCAA Division I poll, will take on No. 12 Butler (Kansas) Community College in the TIPS-C.H.A.M.P.S. Heart of Texas Bowl on Saturday, Dec. 3 in Commerce at A&M-Commerce’s Memorial Stadium.

The NMMI Broncos are also 8-3 on the season. NMMI came into the game with an outside shot at getting into the four-team tournament for the NJCAA national championship: the top four teams in the nation play each other to get into the national title game at War Memorial Stadium in Little Rock, a game the Broncos won a year ago.

But KC prevented the Broncos from getting back with a sound beat-down in the Broncos’ home stadium on Saturday night.

It was the Rangers’ fourth straight win, and the last two – beating Trinity Valley and then New Mexico Military on Saturday – were over the top two teams in the conference.

Fourteen seconds into the third quarter, McCoy returned a kickoff 90 yards to put the Rangers up 17-3. New Mexico added a field goal to get the Broncos within 11, 17-6, with a field goal.

KC got an 18-yard touchdown run by Donerio Davenport to put the Rangers up, 23-6, although the extra point was missed.

Vincent Paige recovered a fumble for New Mexico, and the Rangers scored again on a 2-yard run by quarterback Judah Holdsclaw, and KC’s defense got an interception return by Paige for a 49-yard pick-six.

The Broncos escaped from the Rangers in the third game of the regular season after trailing KC for most of the game in Longview, but couldn’t escape the playoff rematch. NMMI scored its only touchdown of the game with 1:02 left, much too little, much too late, and KC ran the remainder of the clock out.

Davenport finished with 19 carries for 121 yards, putting him over the 1,000-yard rushing mark for the season.

McCoy had three catches for 31 yards to go with his 90-yard kick return for the score.

Holdsclaw went 9-of-20 for 179 yards and an interception.

The 2022 season got off to a great start for the Rangers, as they were impressive in wins over rival Tyler Junior College in a non-conference opener, then at Northeastern Oklahoma A&M on a long road trip to open conference play.

But a loss in Longview to New Mexico Military after leading almost the entire game was a blow – NMMI was number one in the nation at the time – and then a road loss at Navarro the next week was hard.

But KC recovered with a home win over Cisco on hall-of-fame weekend, took a week off, then blasted Southern-Shreveport in a non-conference game.

The offense was sluggish the following week in a trip to Trinity Valley, a 24-14 loss in Athens, and that seemed to be a season-changing loss. After that, Gooden changed some of the offensive pieces. And looking back, the Rangers’ losses were all “quality” losses – every single loss on the schedule wound up being losses to teams in the conference that would be in the playoffs (Trinity Valley, New Mexico Military, and Navarro).

KC finished the regular season by rallying to beat Tyler on the road at Christus Trinity Mother Frances Rose Stadium and then Blinn here for homecoming, and got a little help from Navarro, who beat Tyler – and that allowed the Rangers to get into the conference playoffs.

That was the key, and the Rangers didn’t waste the opportunity.

They got a return trip to Athens and a rematch with Trinity Valley and made the most of it, this time leaving with a 38-10 win, a convincing win over the top seed in the playoffs, a Trinity Valley team that really breezed through the conference schedule.

Up next was the conference championship game at Roswell last weekend, and New Mexico Military came into the game against the Rangers with a mindset of winning and being impressive enough to try and get into the top four to hopefully try and repeat as NJCAA national champions. But KC dashed those hopes with its blowout win, conference championship number 27 for the Kilgore College Rangers and their first since the 2019 season.

Who should be the Fan vote Coach of the Year?