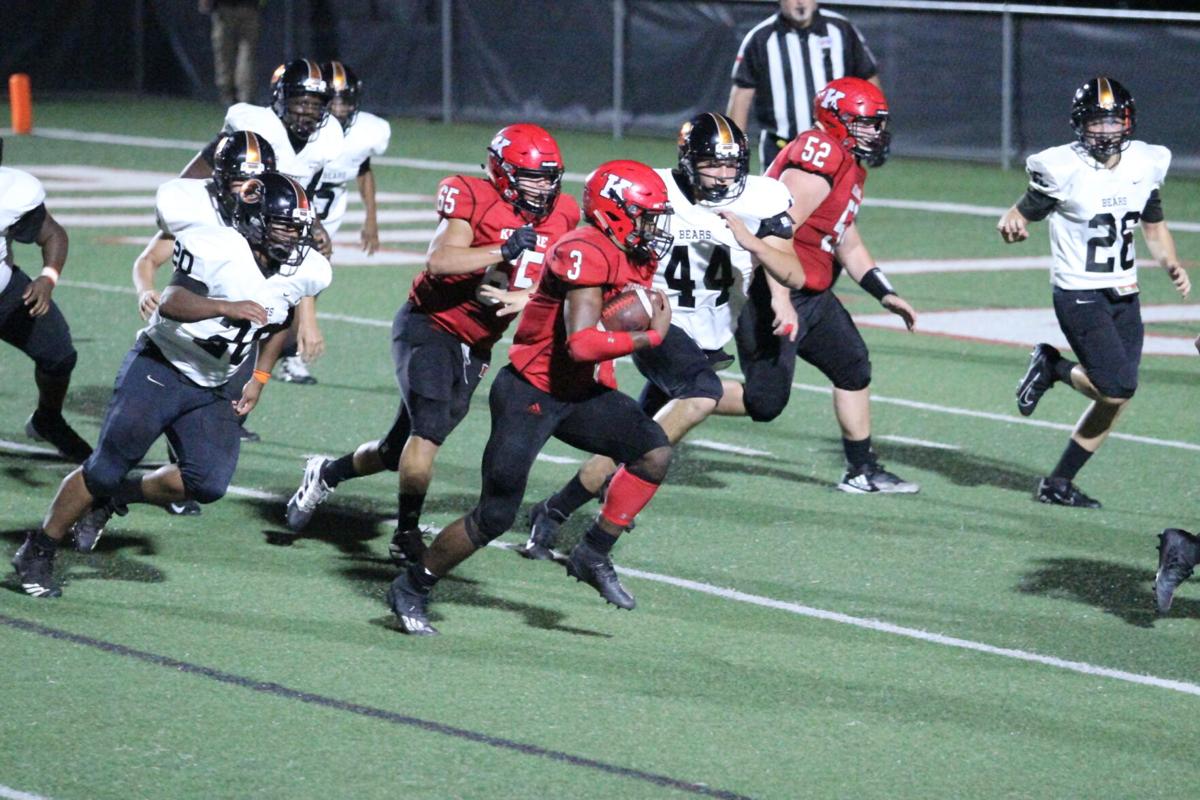 Kilgore’s Jermaine Roney (3) takes his run to the outside against Gladewater on Friday night, at Kilgore’s homecoming here at R.E. St. John Memorial Stadium. 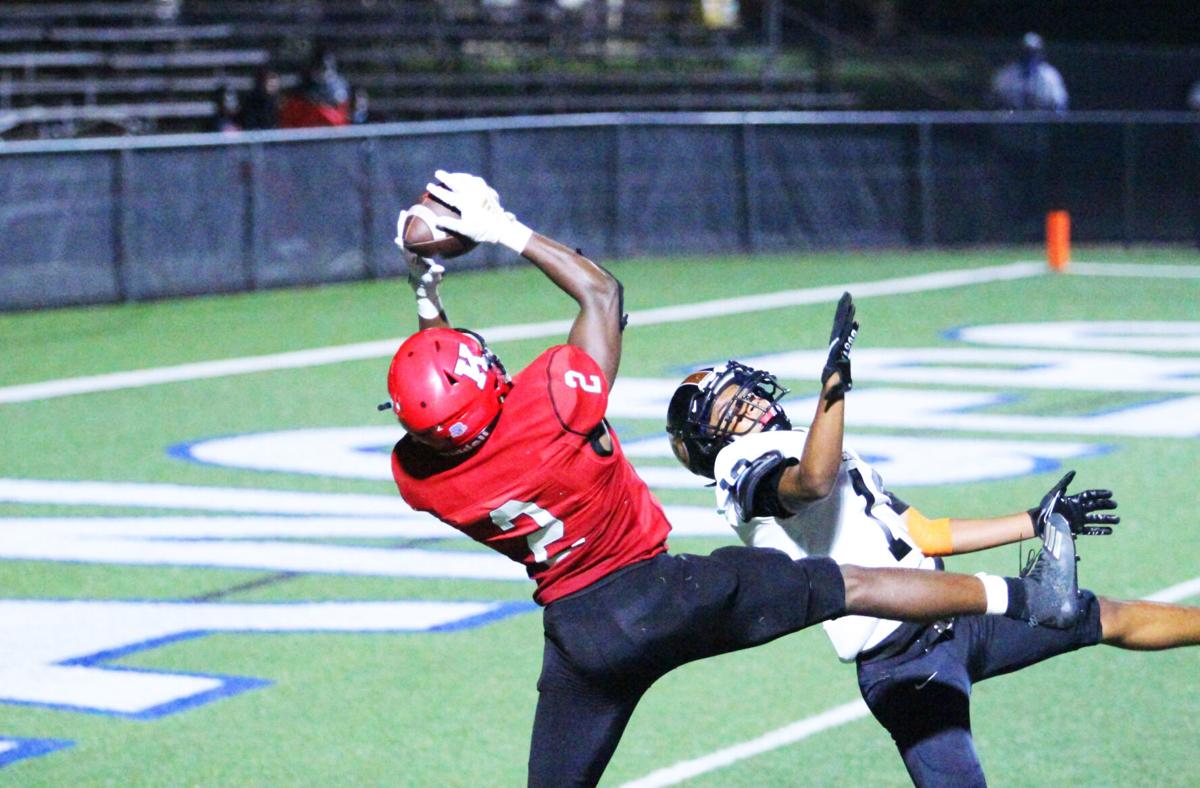 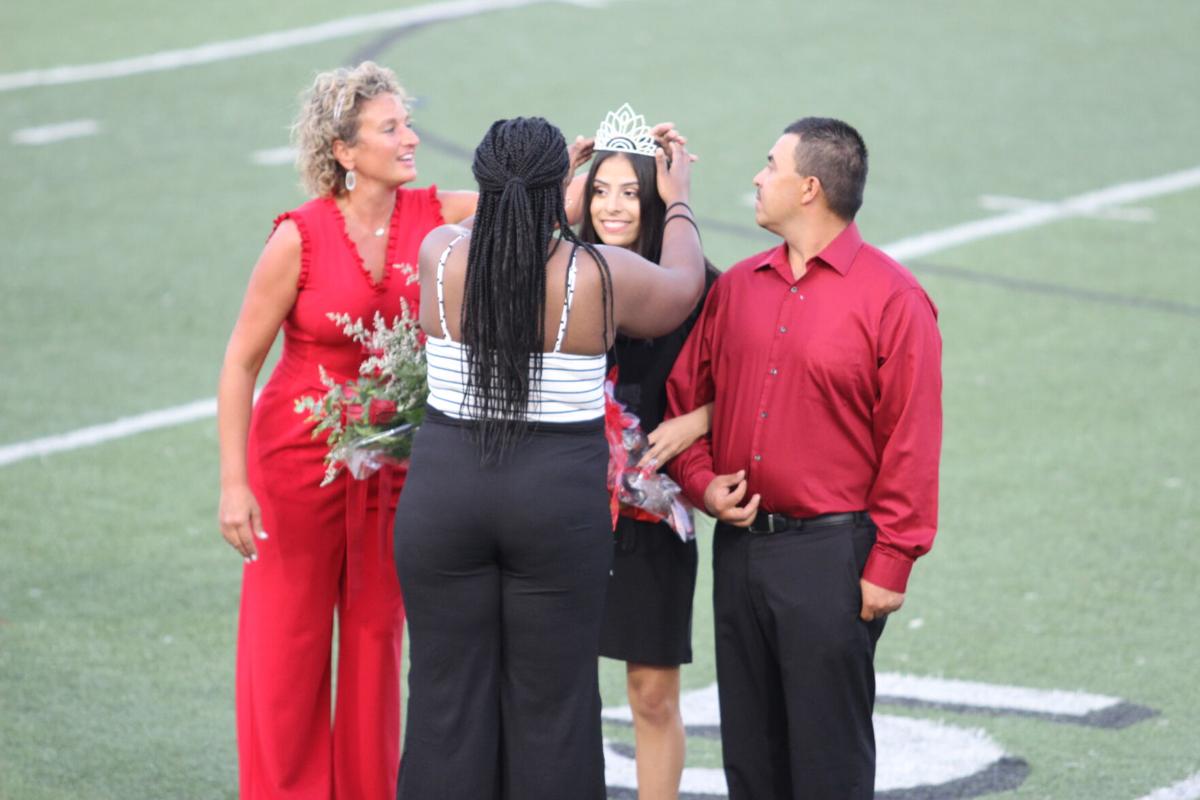 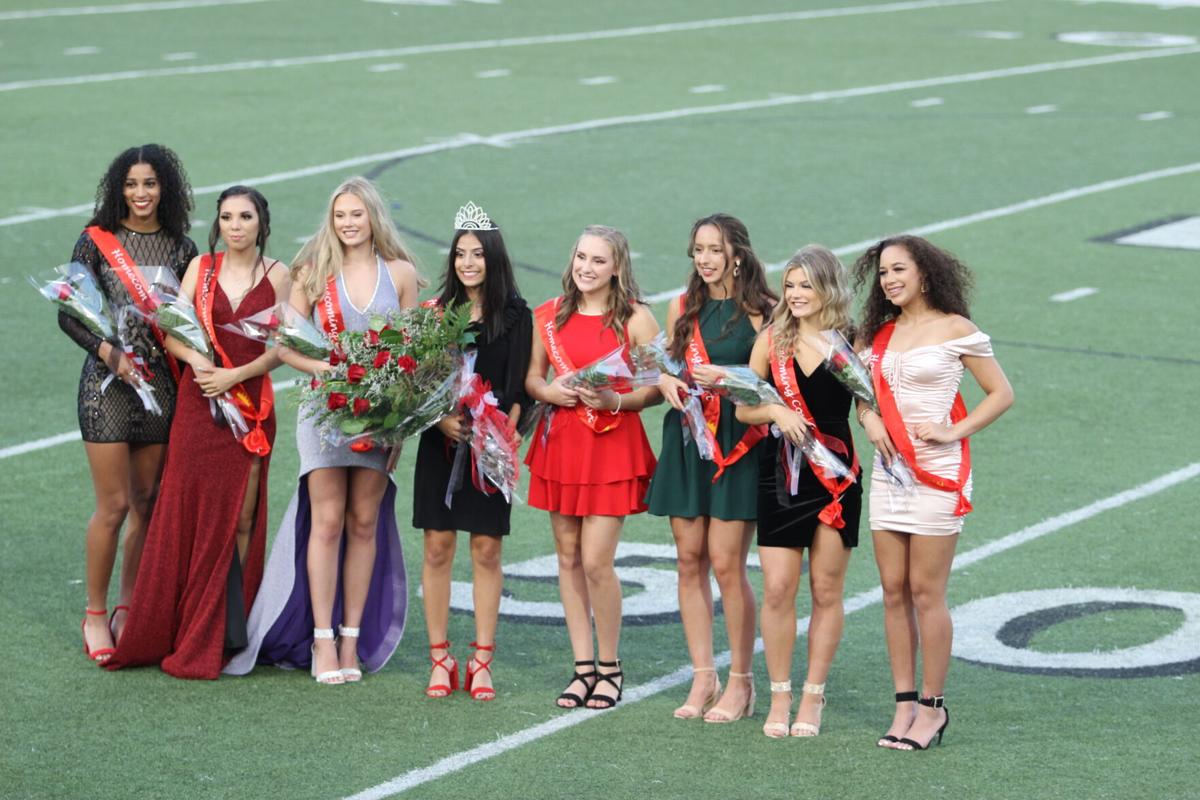 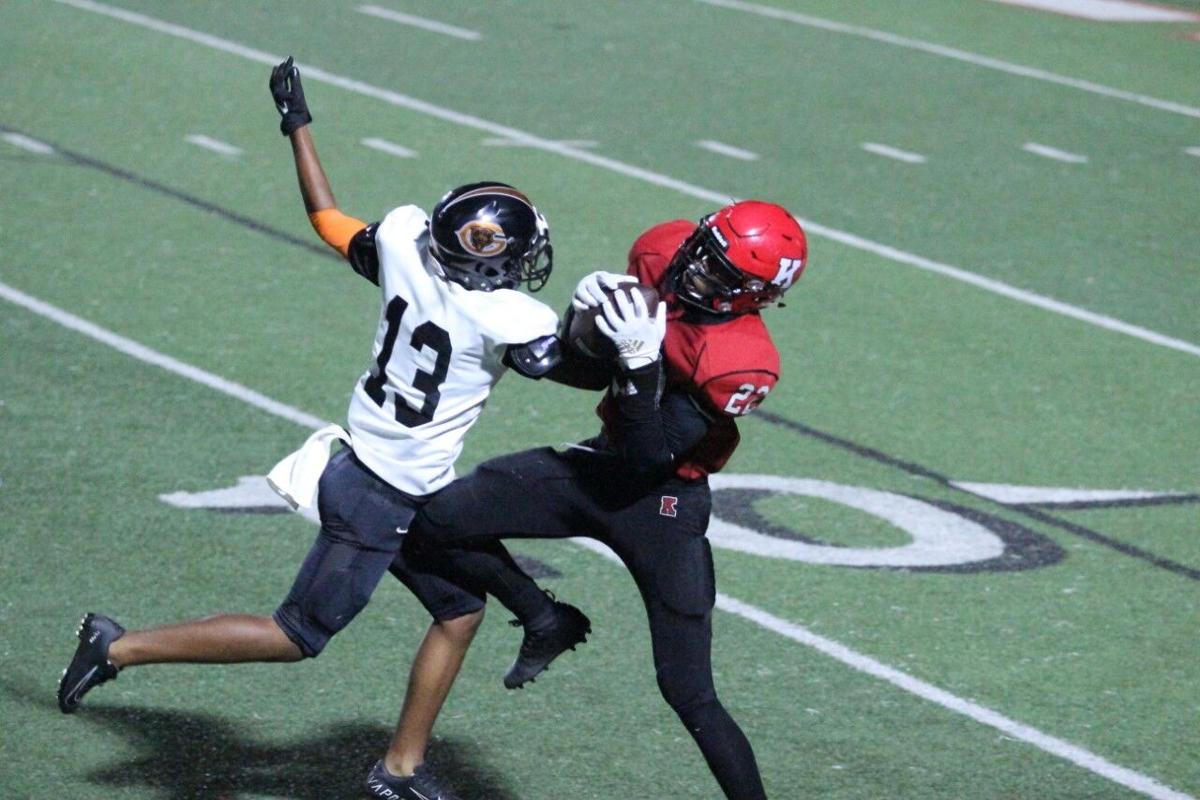 Brian Brown (right) caught this pass from Dalton McElyea, getting all the way down to Gladewater's 9-yard-line. The Bulldogs, though, would turn the ball over before they could complete the comeback, and lost the game Friday night, 35-28. (Photo by DENNIS JACOBS)

Kilgore’s Jermaine Roney (3) takes his run to the outside against Gladewater on Friday night, at Kilgore’s homecoming here at R.E. St. John Memorial Stadium.

Brian Brown (right) caught this pass from Dalton McElyea, getting all the way down to Gladewater's 9-yard-line. The Bulldogs, though, would turn the ball over before they could complete the comeback, and lost the game Friday night, 35-28. (Photo by DENNIS JACOBS)

EDITOR'S NOTE: This is a little longer story than the print edition has, plus it corrects Kilgore's record; the print story has Kilgore at 3-2 this season. The Bulldogs are actually 2-2. The print edition story also had an incorrect fact: it was D.J. Allen who returned Gladewater's late fumble for a score.

Cristina Rosas is the 2020 Kilgore High School homecoming queen. That was presented before the game.

And Cristina will have a heck of a game to commemorate her special moment. Unfortunately, it wasn’t a Kilgore win.

The Bulldogs (2-2) will start their District 9-4A, Division I schedule next week at Palestine.

It was a wild finish with Gladewater. In fact, the whole game was wild.

Kilgore led by two touchdowns, 28-14, late in the third quarter, but the Bears scored on a kick return by K’Havia Reese to cut it to one (28-21), then tied it with seven minutes left in the game. Then, late in the contest, D.J. Allen picked up a fumble by his own teammate and scored on a 72-yard play that put the Bears in front to stay.

After forcing a Kilgore punt with 5 ½ minutes left, Gladewater took over, looking for the go-ahead score. They took over at their own 27, after the punt, but Kilgore’s defense stiffened.

The tables turned, Kilgore taking over following a Gladewater punt at midfield. Reese tipped the ball away from Kilgore’s Brian Brown on first down. The second-down ball was tipped away, too, up and almost caught, then almost intercepted, and the third fell incomplete, as well.

Cade Pippen had a wild night, making play after play, and saved maybe his best for last, as he got the punt off and his teammates downed it at the 1-yard-line, forcing Gladewater to go 99 yards for a go-ahead touchdown with 3:10 left in the tied game.

The incredible ensued: Gladewater’s Devin Walker got free through the defense, was hit and fumbled the ball at his own 28, but Allen picked it up and outraced Kilgore defenders 72 yards for the tiebreaking (and what would be the winning) score, putting Gladewater in front, 35-28, with 2:51 left.

With all three time outs remaining, Kilgore got the ball at its own 25, hoping to tie it again. Dalton McElyea hit Brown, who made a 48-yard catch down to Gladewater’s 9-yard-line. Kilgore was flagged for too many men on the field, moving it back to the 14. But tragedy struck: a fumble on the snap, though, resulted in a Gladewater recovery, by G’Braylon Polly.

Kilgore had three time outs, and used one after the first Gladewater play, with 1:40 left. It appeared Gladewater fumbled on the play, but officials ruled, no.

The ‘Dogs called their second time-out with 1:33 left, stopping the clock with Gladewater in a third-and-five at its own 29. But Gladewater got the first down on the ensuing running play, and was able to kneel down on the clock for the last minute and change, sealing the win.

With Kilgore in front, 21-14, to start the third quarter, the Bulldogs looked to add more – running back Tray Epps caught a pass from McElyea that he took 52 yards to Gladewater’s 22-yard-line, but a couple of plays later, Gladewater’s Tyrone Maddox picked off the ball in the end zone to end the threat.

Kilgore did eventually get in front by two touchdowns. Gladewater's Walker fumbled the ball at the Kilgore 35. Davin Rider for the Bulldogs scooped it up and returned it all the way for a score, but it was called back on a block penalty. Still, Kilgore had the ball at the Gladewater 45. Epps had a 17-yard run that kept the drive alive, and then Pippen had a couple of catches, the last one leaving the ‘Dogs at the 1. Rider scored on the 1-yard play and gave Kilgore the score, briefly putting them up two touchdowns, 28-14, late in the third quarter before the fourth-quarter craziness.

On the kickoff, Kilgore kicked a pop-up kick that Reese returned 69 yards for the score. That got Gladewater within a score (28-21), and then Gordon’s 6-yard run tied things at 28.

The entire game was played with kind of a strange vibe. It was a first quarter that had more excitement than many entire seasons for some teams.

The Bulldogs electrified the crowd immediately with a quick score. After Epps picked up only a yard on the first down play, to his own 42-yard-line, McElyea swung the ball out on a short pass to Epps, who promptly burst down the Gladewater sideline and into the end zone, a 58-yard pass. Chris Baldazo hit the extra point, and Kilgore had a 7-0 lead – for exactly 16 seconds.

That’s because Eligia Carter – who has 4,000-plus career rushing yards at the school – broke free on the kickoff for a 101-yard touchdown return. The kick tied the game at 7-all, two touchdowns with just a minute, one second off the clock.

Kilgore broke the tie on the final drive of the first quarter. The Bulldogs got the ball at their own 37, after the Bears turned the ball over on downs, and McElyea got a first-down pass to Corey Rider for 7 yards, then a pass to Brian Brown that Brown took 34 yards down to the Gladewater 22. Two plays later, the Bulldogs scored on a 5-yard run, with 27 seconds left in the quarter. Baldazo hit the point after, making it 14-7 Kilgore.

The Bulldogs’ defense got Kilgore the ball back, though, before the half, and what followed was the game’s biggest play to that point: a 26-yard pass from McElyea to Adkins on fourth down and long, all the way down to Gladewater’s 1.

McElyea would squeeze up the middle behind his offensive line for the 1-yard score, and that, with Baldazo’s point after, allowed the ‘Dogs to go up 21-14 at the half.

For Kilgore, from the Bulldogs' official statistics pages on Saturday morning, McElyea was solid: 19-of-29 for 338 yards, a touchdown and an interception. Roney had five catches for 76 yards. Adkins had four for 45. Epps had three for 114 and a touchdown.

Pippen had three catches for 23 yards. Rider had two for 10 yards, and Brown had two for 70.

Epps was the leading rusher, getting 47 hard-fought yards on 14 carries. Rider had three carries for 13 yards. McElyea had just 2 yards on four carries, but one of them was a touchdown on the quarterback sneak. And Roney had 5 total yards, but also had a touchdown.

Baldazo was 4-of-4 in extra points kicked, and missed a field goal. Pippen had three punts, and averaged 49 yards, and the big play that avoided a 40-yard loss.

Adkins had a 47-yard punt return, and a 27-yard kick return.

Defensively, Brown had 12 tackles to lead the team in that category, and also had a quarterback hurry. Marcaelyn Caraway, Davin Rider and Eli Caruthers each had nine tackles. Caruthers had a tackle for loss, and shared one with Rider, who had two others by himself. Rider also had the fumble recovery and a pass break-up.

Alex Chavez, Kaden Kenney, Chris Ervin, and Trey Williams each had three tackles, and Brantley Propes and Hunter Lewis each had two. Williams had a forced fumble, as well.