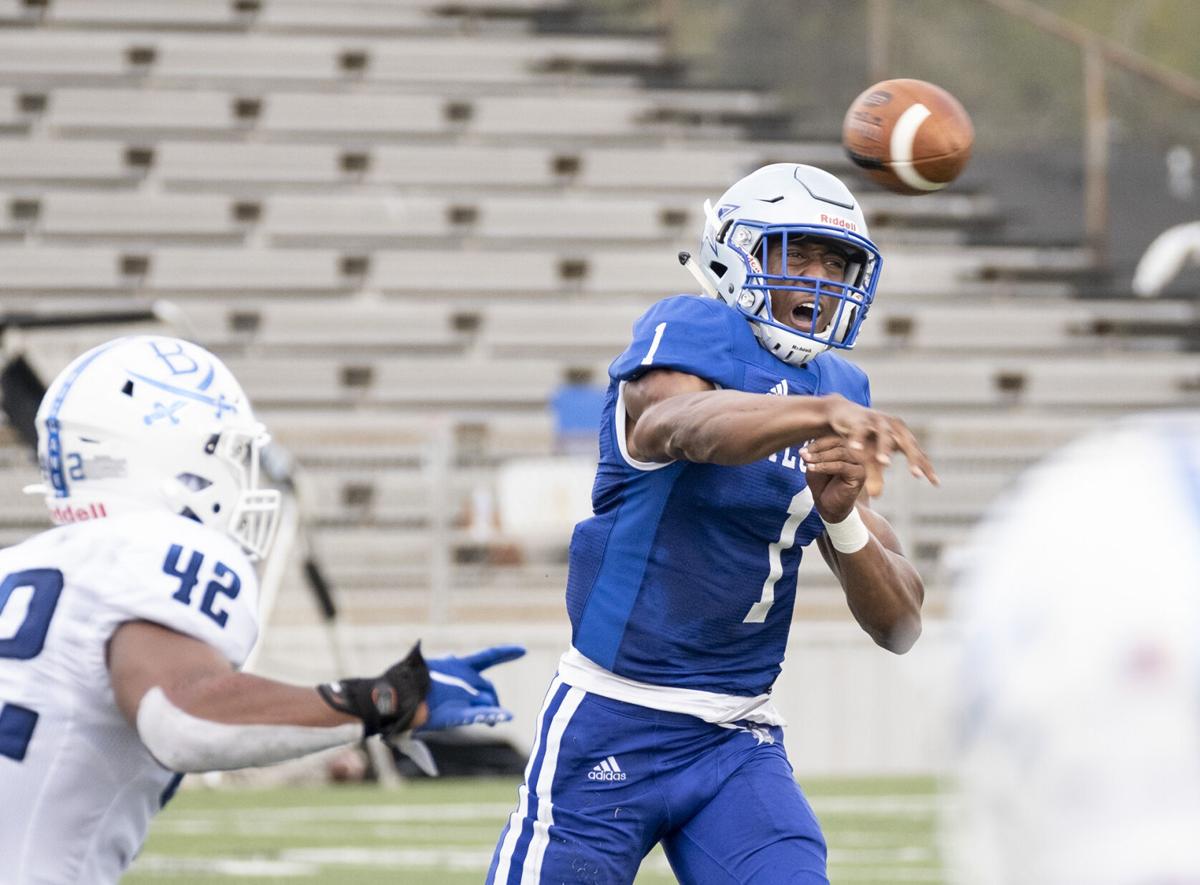 Kilgore College quarterback Chance Amie (center) throws a pass against Blinn on Saturday in the first of eight spring season games for the Rangers, who play at Northeastern Oklahoma A&M (NEO) next Saturday. 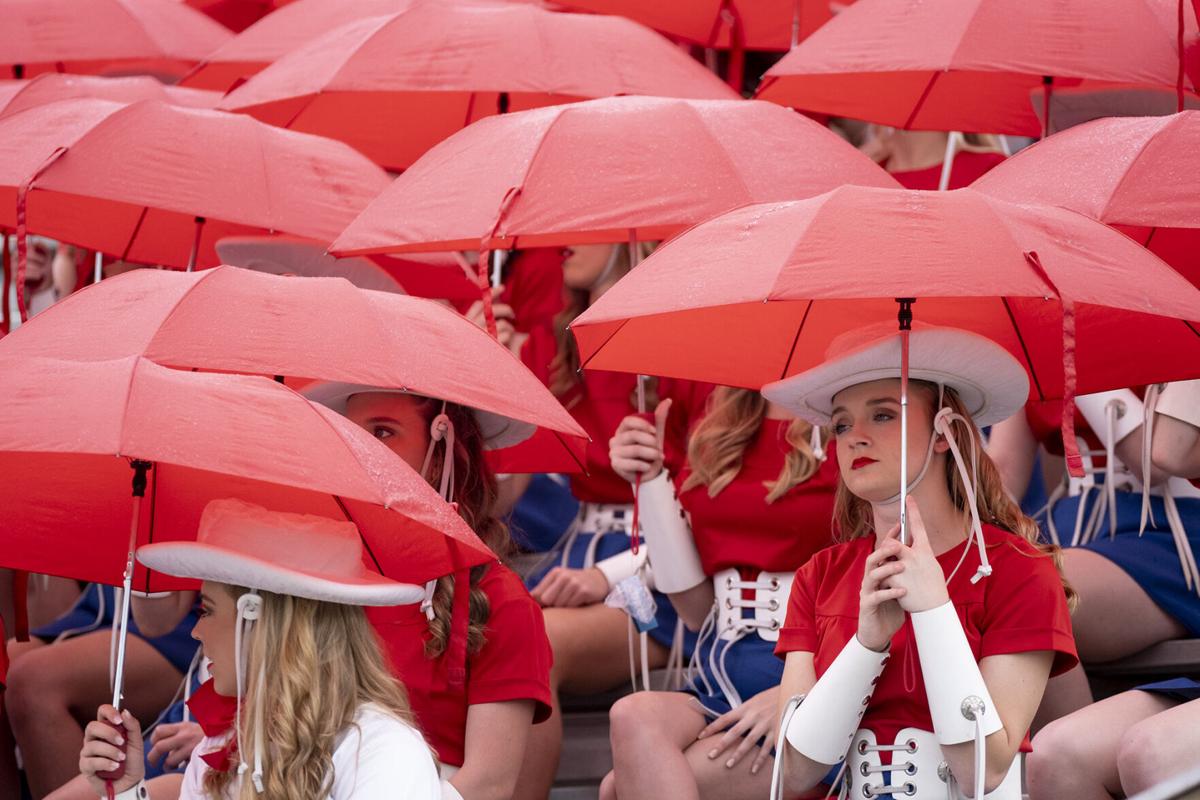 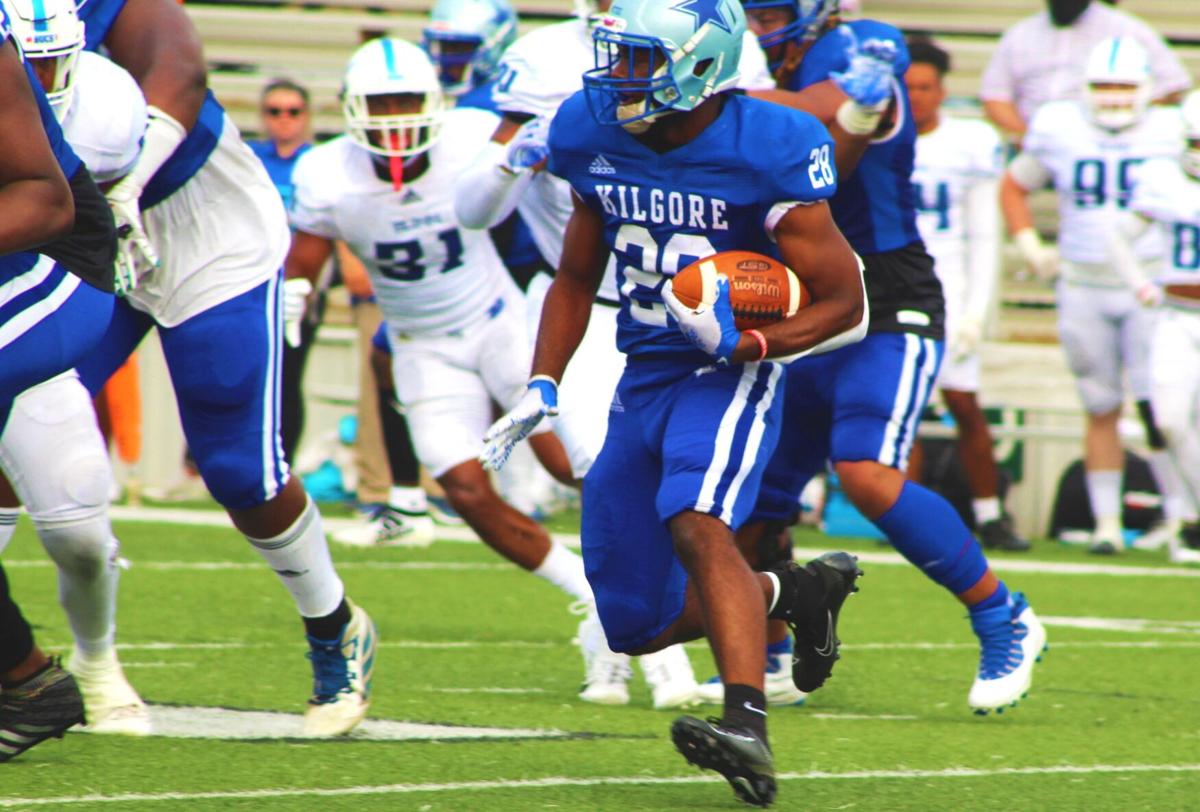 Kilgore College quarterback Chance Amie (center) throws a pass against Blinn on Saturday in the first of eight spring season games for the Rangers, who play at Northeastern Oklahoma A&M (NEO) next Saturday.

After waiting 511 days to get back on the field for a real game, the Kilgore College Rangers wasted little time proving they are worthy of a No. 4 preseason ranking.

The Rangers used 10 different players to pile up more than 400 rushing yards, scored once on special teams and came away with five turnovers on defense en route to a 56-21 beatdown of the Blinn College Buccaneers in Southwest Junior College Football Conference action here at R.E. St. John Memorial Stadium.

The game was the first for KC since falling in the opening round of the playoffs against New Mexico Military Institute, 20-10, to end the 2019 season. The 2020 fall campaign was wiped out due to COVID-19 protocols, but on Saturday the only delay came at the end of the contest when officials stopped the game with 2:35 left and chased the teams off the field due to approaching storms.

KC had the ball on the Blinn 29-yard line when play was stopped.

The Rangers rushed 57 times for 421 yards and six touchdowns. Chance Amie carried nine times for 95 yards and one TD. Garrison Johnson had nine carries for 70 yards and a score. Brandon Webb rushed for 68 yards and a pair of touchdowns, and L'Ravien Elia and Kennieth Lacy had 57 yards apiece - with Elia and Malcolm Mays both scoring on the ground.

Special teams got in the scoring act when Willie McCoy returned a kickoff 87 yards for a touchdown, and the defense came up with big plays all day long - including interceptions from Quinton Sharkey, Jabari James and Jayce Bludau and fumble recoveries from Keith Harris and Zhyon Bell.

Blinn finished with 99 rushing yards, and QB Chandler Rogers completed 13 of 27 passes for 224 yards, three touchdowns and the three picks.

Both teams mounted long scoring drives to open the game, with KC moving 75 yards in 12 plays and taking 6:04 off the clock before Mays cashed in with a 5-yard run. Blinn answered with a 13-play, 81-yard drive that ate 5:28 of game clock before Rogers scored on a 1-yard run.

McCoy returned the ensuing kickoff for a touchdown, and KC scored again 1:13 later on a 28-yard run by Webb one play after Harris recovered a fumble.

The Bucs kept it close with a 26-yard TD pass from Rogers to Imiee Cooksey with 43.9 left in the opening quarter, but Sharkey picked off Rogers on Blinn's next possession and returned it 76 yards to the 1-yard line to set up a short TD run by Johnson, and KC added to the lead with an 11-yard run by Elia with 2:32 left to make it a 36-14 contest.

Rogers hit Chase Davidson on an 85-yard touchdown strike 16 seconds later, but KC took a 39-21 lead in at the half after a 23-yard field goal by Kenny Pham and put things away with TD runs of 6 yards by Webb and 49 yards by Amie and a 27-yard field goal by Pham in the third quarter to make the final 56-21.

KC will visit Northeastern Oklahoma next Saturday, and return home to take on New Mexico Military in a 3 p.m. contest on April 10.

Jack Stallard is the sports editor of the Longview News-Journal, contributing through M. Roberts Media.