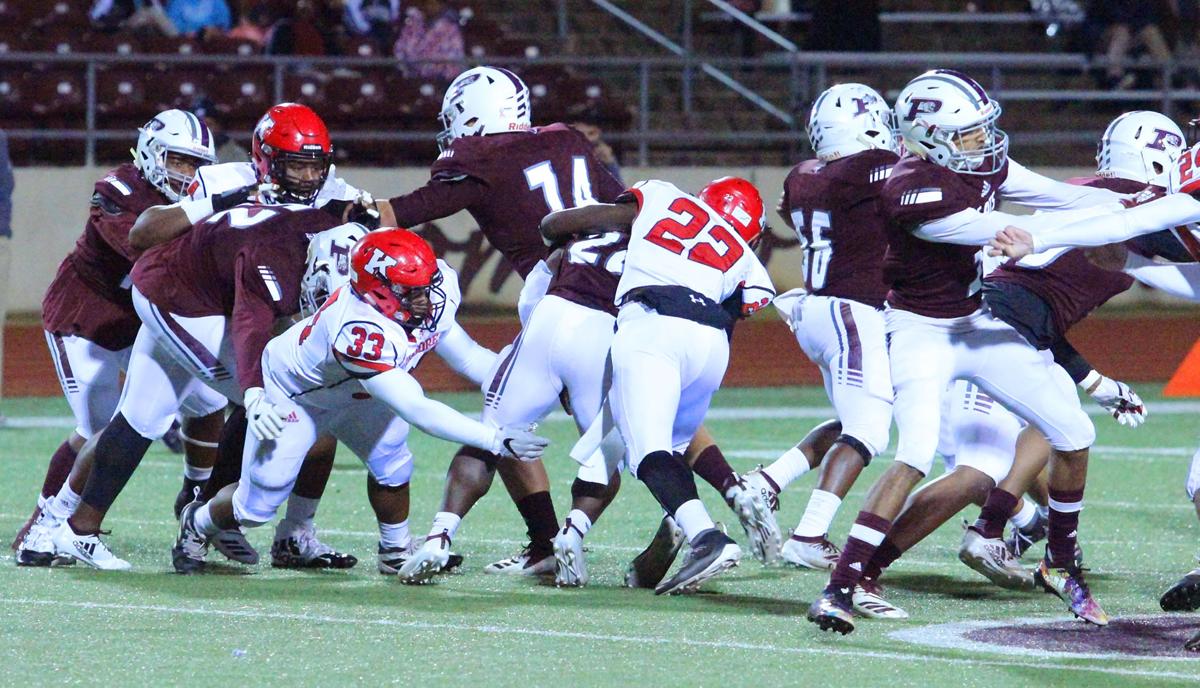 Kilgore's Trey Williams (33) and Brian Brown (22) make a tackle. The Bulldogs lost at Palestine, though, 21-7, on Friday night. Kilgore, still trying to make the playoffs, hosts Carthage next Friday in the regular season finale. (Photo by DENNIS JACOBS) 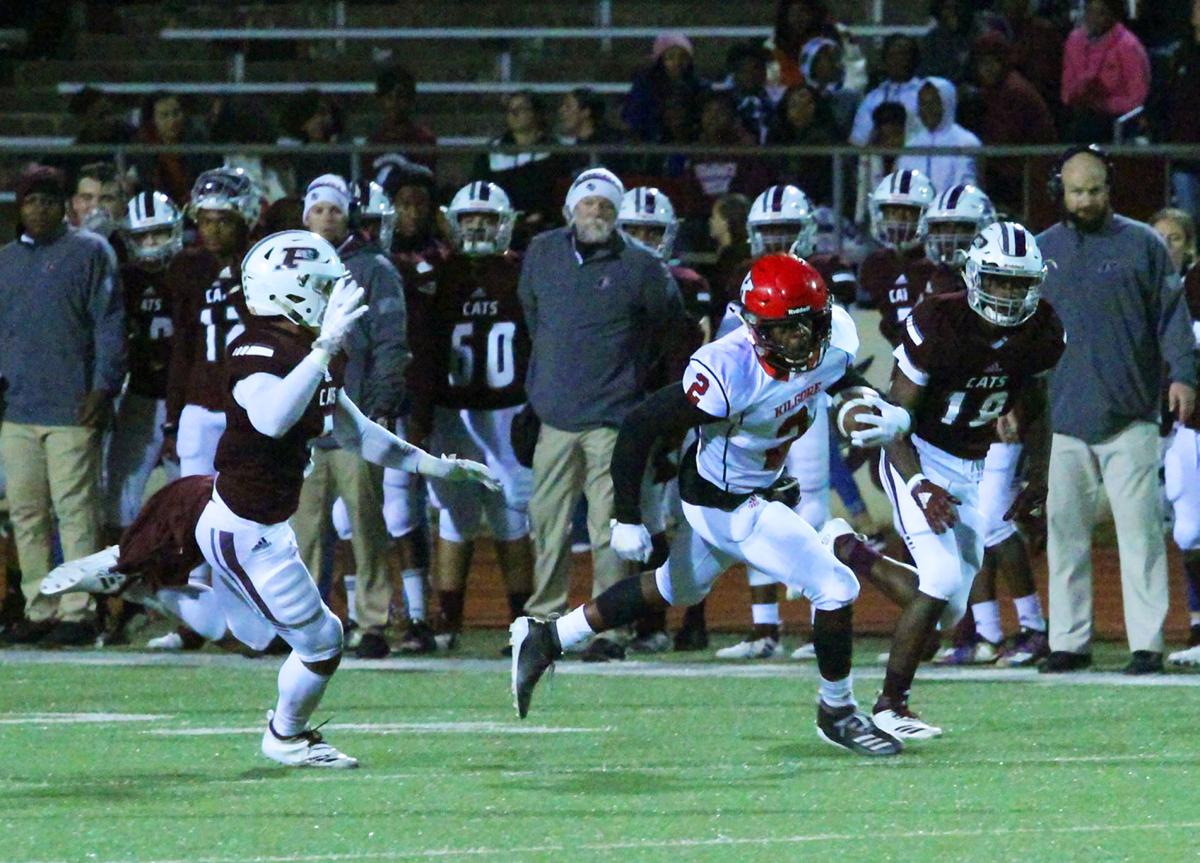 Donovan Adkins (2) looks for room to run against Palestine. Kilgore lost the District 10-4A, Division I game, 21-7. (Photo by DENNIS JACOBS)

Kilgore's Trey Williams (33) and Brian Brown (22) make a tackle. The Bulldogs lost at Palestine, though, 21-7, on Friday night. Kilgore, still trying to make the playoffs, hosts Carthage next Friday in the regular season finale. (Photo by DENNIS JACOBS)

Donovan Adkins (2) looks for room to run against Palestine. Kilgore lost the District 10-4A, Division I game, 21-7. (Photo by DENNIS JACOBS)

PALESTINE – In the end, Kilgore just dug themselves too much of a hole and couldn’t climb out, and the Palestine Wildcats had claimed another upset.

And the playoffs in District 10-4A, Division I? Well, it’s 52-card pickup – except for Carthage.

Kilgore suffered its second loss of the district schedule here at Wildcat Stadium on Friday night, falling to Palestine, 21-7. The loss drops Kilgore to 5-4 overall, but 2-2 in district play, with just one regular season game to go: at home next Friday against Carthage, who routed Henderson last night.

The Bulldogs, of course, are part of a mad scramble for the playoffs in the district. Only the top four teams get in, and Carthage will definitely be one: they’re still unbeaten.

Kilgore’s clearest path to get in is to upset Carthage.

Trailing 14-0 at the half Friday against Palestine, Kilgore tried to scratch its way back into the game. The Ragin’ Red drove downfield on the legs of quarterback Dalton McElyea and Trey Epps, with McElyea grabbing a couple of first downs and then Epps reeling off runs of 16 and 19 yards.

It was Kennieth Lacy, though, with the honors. Lacy scored on a 2-yard run, with 6:59 left in the third quarter, and Kilgore halved the lead to 14-7.

But the Wildcats punched right back with a score of their own on the next drive, a 25-yard touchdown pass from quarterback Christian Hutchinson to Marquis Thompson, with three minutes left in the third. That would ultimately be the score that would put the game out of reach for Palestine, and in spite of Kilgore converting a couple of third and fourth downs on passes to Donovan Adkins and Cade Pippen, the Wildcats were able to run out the clock.

In the first half, Palestine put together a 15-play, 61-yard drive, a 3-yard scoring run by workhorse running back Jeremiah Davis. Palestine grabbed a 7-0 lead, and the drive ate up clock, eight minutes of it.

Palestine took its 7-0 lead into the second quarter, and with the ball, drove back deep into Kilgore territory. Davis bumped into his quarterback on a fourth and 5, but still got free for a 17-yard run, all the way down to Kilgore’s 17-yard-line.

Hutchinson was blitzed on a third-down play at Kilgore’s 15, but managed to get the throw off into traffic, a catch by Keshawn Nonette at Kilgore’s 3. Davis scored on the next play, the 11th play of the drive, and took a 14-0 lead, with 6:45 left in the half.

Adkins laid out for a long pass downfield on Kilgore’s next drive, the pass just barely out of his reach and bounced off the cold Wildcat Stadium turf. A bobbled ball led to another third and long play, and McElyea had no options on the third and 13, and had to run for all he could, short of the first down.

The Bulldogs got the ball back late in the half, though, after forcing Palestine to a turnover on downs, and McElyea connected with Pippen to convert on a third and 10. On first down, with 40 seconds left in the half, he tried to hook up with DaVondrick Crowe on a pass downfield, but it was incomplete, and Kilgore was flagged for ineligible receiver downfield.

Quickly, out of the shotgun, McElyea completed a pass to Adkins for a pass that he caught at his own 40, and then took into Palestine territory for a 29-yard gain, to the Wildcats’ 46. Trying to make a play, McElyea threw a pass to the middle of the field, but it was picked off by Palestine’s Tayon Huntley. Trey Epps made a touchdown-saving tackle at Kilgore’s 48. That ended the half.

It was Palestine’s first win over Kilgore since the first round of the playoffs in 2002, when Adrian Peterson lined up in the Wildcats’ backfield.