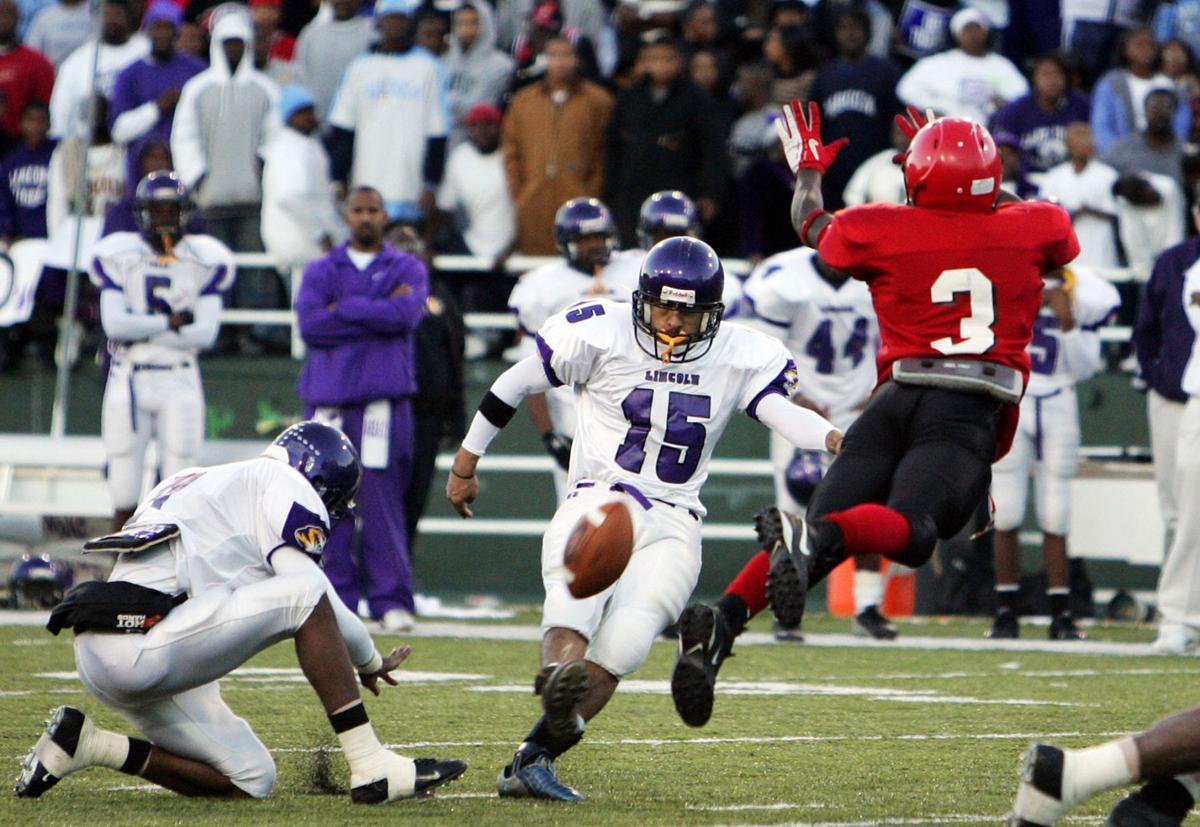 That fateful moment: Kilgore’s Nick Sanders (3) blocks a field goal by Dallas Lincoln’s Salvador Miriles. Sanders would go on to scoop up the loose ball and return it for the winning touchdown, giving KHS a 33-27 win in double overtime for the UIL Class 4A, Division I state championship. That was on Dec. 18, 2004, at Baylor’s Floyd Casey Stadium in Waco. 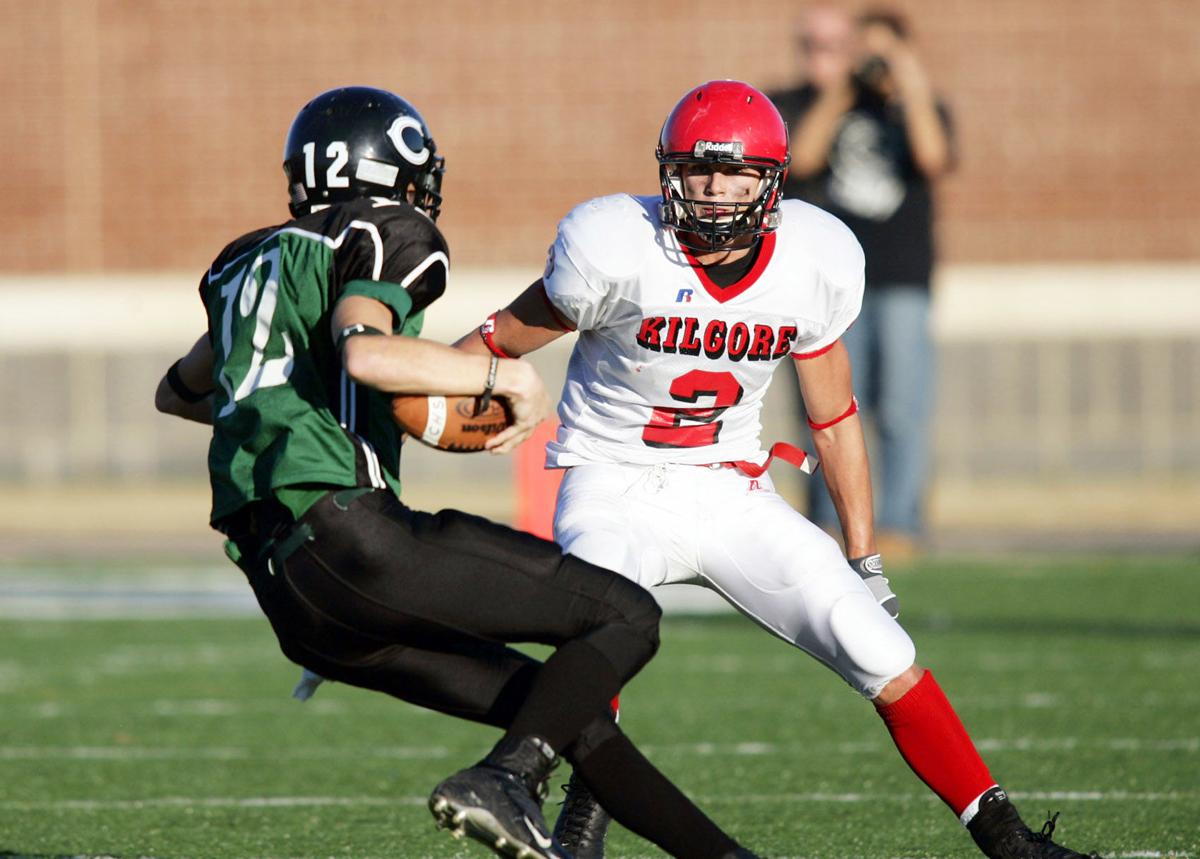 Kilgore defensive standout Trey Sands (2) is shown here, about to tackle a Pflugerville Connally player in the 2004 UIL Class 4A, Division I semifinals, a game played Dec. 11, 2004, at Birdville ISD Stadium in Fort Worth. Kilgore would win the state title the following week. 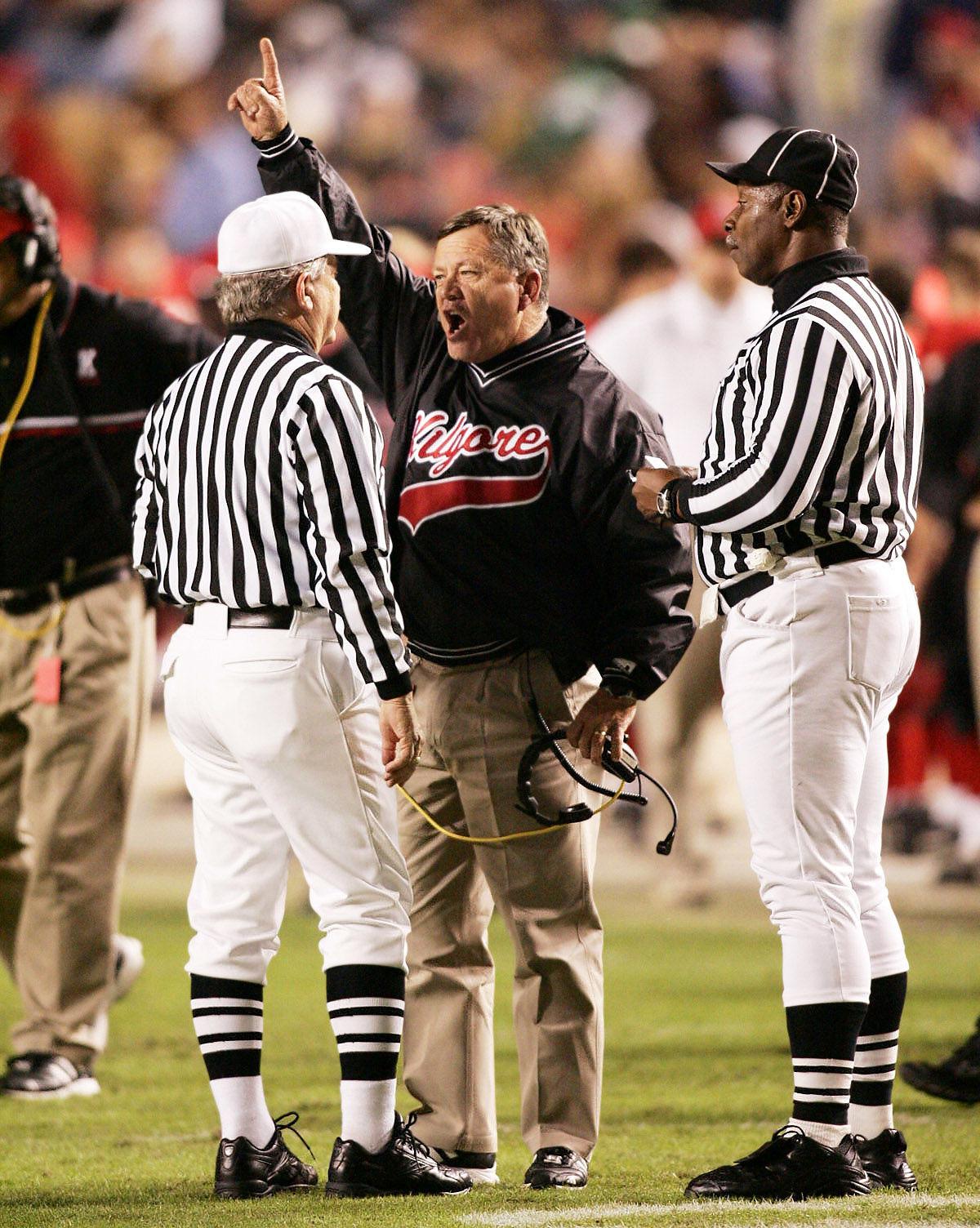 Then-Kilgore head football coach Mike Vallery, center, “debates” with an official during a game in the 2004 season, one in which Kilgore would go 16-0 and win a state title on Saturday, Dec. 18, 2004 in Waco. (File photo by KATHY BOWDEN) 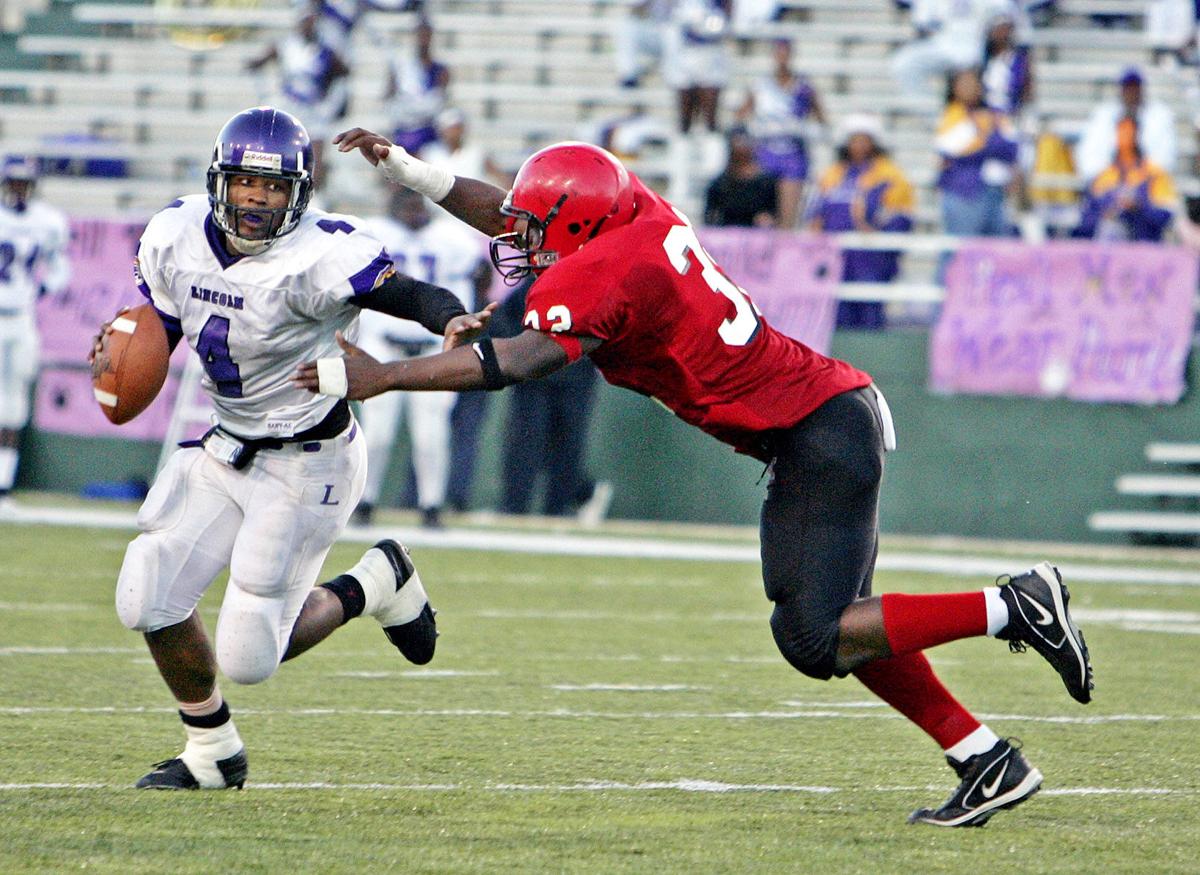 That fateful moment: Kilgore’s Nick Sanders (3) blocks a field goal by Dallas Lincoln’s Salvador Miriles. Sanders would go on to scoop up the loose ball and return it for the winning touchdown, giving KHS a 33-27 win in double overtime for the UIL Class 4A, Division I state championship. That was on Dec. 18, 2004, at Baylor’s Floyd Casey Stadium in Waco.

Kilgore defensive standout Trey Sands (2) is shown here, about to tackle a Pflugerville Connally player in the 2004 UIL Class 4A, Division I semifinals, a game played Dec. 11, 2004, at Birdville ISD Stadium in Fort Worth. Kilgore would win the state title the following week.

Then-Kilgore head football coach Mike Vallery, center, “debates” with an official during a game in the 2004 season, one in which Kilgore would go 16-0 and win a state title on Saturday, Dec. 18, 2004 in Waco. (File photo by KATHY BOWDEN)

Tied at 27 in double overtime, the eyes of a huge crowd fixed upon Dallas Lincoln kicker Salvador Miriles, as he stepped into his 42-yard field goal attempt that would put his Tigers in front — the weight of the Metroplex was pressing down on Miriles and the Tigers, as they tried to claim the Dallas ISD’s first state football championship since 1950.

Miriles bounded forward, drew back and kicked the ball, and fate stepped in — in the form of Nick Sanders.

Sanders, the Kilgore defensive back, raced off the edge like his life depended on it, throwing his body full-out in front of the kick.

Not only that, but he got the bounce, too. The ball hopped right back into the sure-handed Sanders, who had blistering speed. Chauffered by a host of teammates — but outrunning all of them — Sanders raced about 70 yards downfield and into the end zone for the go-ahead touchdown.

Then — silence, for just a moment, as the crowd, then-Kilgore coach Mike Vallery, his staff, his players, all the Kilgore fans, all the Dallas Lincoln fans, and maybe even a few officials – scoured the field for a yellow flag.

Kilgore won, completing the ultimate season, a 16-0 record and earning the 2004 University Interscholastic League’s Class 4A, Division I championship that day at Baylor University’s Floyd Casey Stadium. That was Dec. 18, 2004.

It’s been 15 years, and many of those players, now former but forever Bulldogs, still get back from time to time to check out their successors in Ragin’ Red uniforms. Defensive coordinator Mike Wood became the Bulldogs’ head coach and some of the staff that day are still on staff.

Probably most are like Bill Slagle, an attorney now, but wasn’t too proud to admit this when the News Herald recognized the anniversary on Facebook: “Still have a ‘shrine’ in my home.” And Slagle posted a photo of a bookcase, complete with his commemorative signed football, a 2004 state championship cap, and a mini-football, likely thrown out by the KHS cheerleaders that same season.

There have been honors since then: signs on the outskirts of the city limits, welcoming people to Kilgore, still recognize the champions and have since that day. A reunion of sorts was held a few years ago, as several of the players on that team were honored in a halftime at R.E. St. John Memorial Stadium during the 10{sup}th{/sup} anniversary season. The UIL recognized that Kilgore-Lincoln game as one of the greatest in the history of Texas high school football.

But no celebration was as big, of course, as the one on that December afternoon, many Kilgore players, coaches and fans alike not wanting to leave the turf that day.

It was quite the journey to get there. Few remember it, but Kilgore had several injuries in its season opener that year, a 49-10 win at Greenville.

But the Bulldogs overcame that. They beat smaller-classification Atlanta, 42-13, here at R.E. St. John, then took down John Tyler — by one point — 7-6, at Rose Stadium the following week.

The Bulldogs hosted Nacogdoches to close out September, 2004, and won convincingly, 47-18, to start their district schedule. They beat Marshall in Marshall the following week, shut down Pine Tree, 42-7, at home, and then escaped Hallsville courtesy of a touchdown and a safety (9-7).

Kilgore blew by Whitehouse, and then played Jacksonville in a game that many remember, a 20-17 Kilgore win that was one of the best games in the long-storied Kilgore-Jacksonville series.

The regular season finale was somewhat anti-climatic, a 49-0 shutout of Henderson. And then the playoffs began.

Kilgore was stunned at halftime of their first-round game at Waco ISD Stadium, trailing Brenham, 21-3, the only score a field goal by Rudy Galvan.

But the Bulldogs rallied, what might be the most important rally in KHS sports history, and blew the doors off Brenham in the second half — Brenham didn’t even score, and Kilgore won the game going away, 38-21. Quarterback Chase Fisher and Courtney Thomas played pitch-and-catch that second half, and while the Brenham defense keyed on Kilgore running back Keith Gilliam, Fisher, Thomas and the passing game had a field day.

The following week, Nov. 20, was a second-round game not remembered so much for its score – 41-0, Kilgore – but for the weather. The KHS-Port Neches-Groves second-round playoff game was played at Stephen F. Austin University’s stadium in Nacogdoches, and thunderstorms forced lightning delays well into the night.

There was even talk that if the game didn’t begin by midnight, there would have to be a coin flip to determine who would advance.

But the game did get started, and PNG probably would’ve loved to have had that coin flip. Kilgore defensive players Eddie Jones and Wayne Daniels set up camp in the PNG backfield, tight end Britt Mitchell and Thomas made some big catches from Fisher, Gilliam and that Bulldogs’ offensive line tore through the PNG defense, and the Bulldogs ruled the day again.

Kilgore topped El Campo, back at Waco ISD Stadium, in what seemed like the windiest day in Texas history in the third-round game the following week (Nov. 26, 18-0 Kilgore), and then the Ragin’ Red had their patience tested in a heated battle with La Marque at Texas A&M in the fourth playoff game. Kilgore won, 26-21, but the contest was marred by one penalty after another — La Marque had had success on the state level, but not that day (Dec. 3).

One of Kilgore’s toughest games of the year was the 4A-DI semifinal against Pflugerville Connally, played at Birdville ISD Stadium in Fort Worth on Dec. 11. Another windy day, but the difference was Kilgore by just three points, a 10-7 win that sent the Bulldogs to the state championship date against Dallas Lincoln the following Saturday at Floyd Casey Stadium in Waco, a Saturday that Kilgore will never forget.