Sabine High School's boys senior basketball players, including manager Collin Walden (third from left), posed for this photo before Friday night's game against Harmony. Walden, who has learning disabilities, played in the game. (Photo courtesy of THE WALDEN FAMILY) 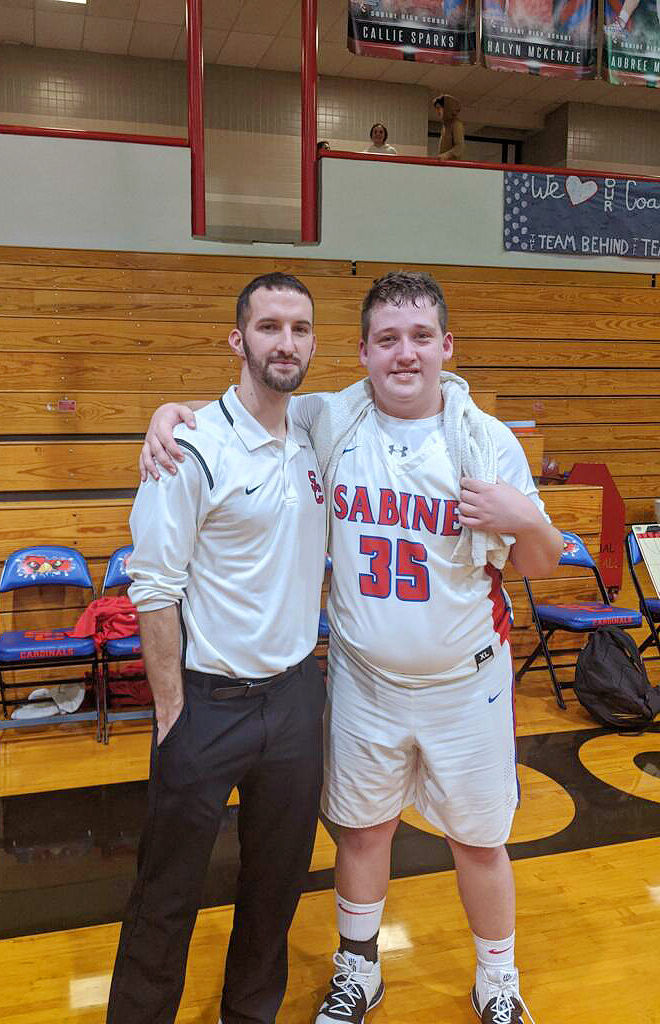 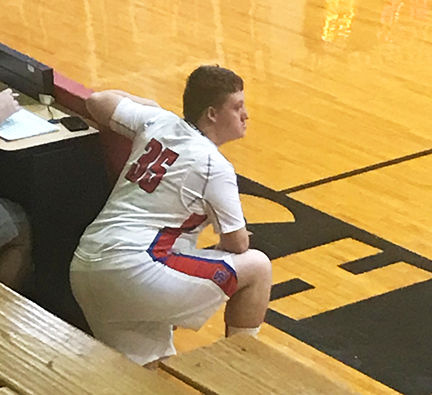 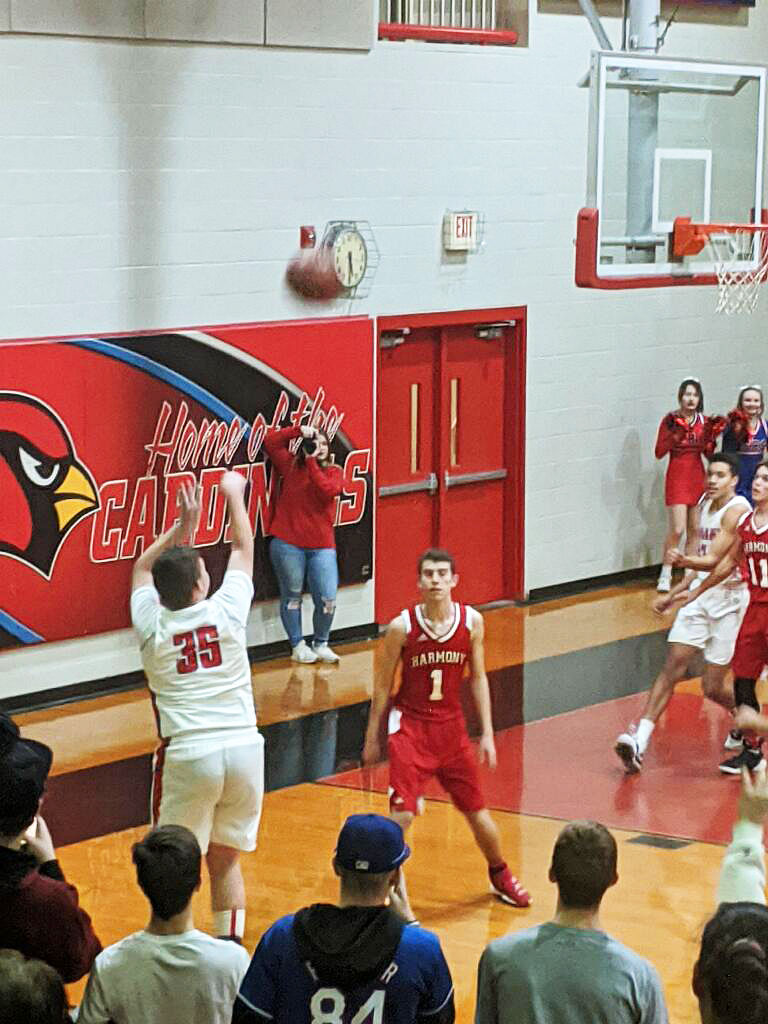 The moment that brought the crowd -- all of them -- to their feet: when Sabine manager Collin Walden (above, 35), who has learning disabilities, came off the bench and scored five points in his first-ever high school basketball game. (Photo courtesy of THE WALDEN FAMILY) 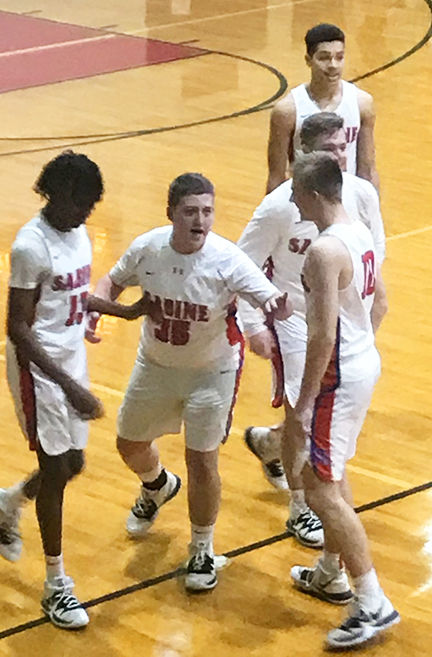 Sabine High School's boys senior basketball players, including manager Collin Walden (third from left), posed for this photo before Friday night's game against Harmony. Walden, who has learning disabilities, played in the game. (Photo courtesy of THE WALDEN FAMILY)

The moment that brought the crowd -- all of them -- to their feet: when Sabine manager Collin Walden (above, 35), who has learning disabilities, came off the bench and scored five points in his first-ever high school basketball game. (Photo courtesy of THE WALDEN FAMILY)

There’s always been a special magic for folks who were around Sabine High School senior Collin Walden, whose personality seems to touch everyone he meets.

On Friday night, in a home basketball game against Harmony, Walden, who has learning disabilities, brought some of that magic to the court.

Collin, a basketball manager for all four of his high school seasons, didn’t just suit up for the senior night game – he got in, and after a few tries, hit a long-range shot that literally brought the entire crowd to their feet.

Sabine, in the thick of the playoff race in District 16-3A, got five points from Collin off the bench in a 60-37 win over the Eagles.

Sabine boys basketball head coach Colby Carr came to the school when Collin was in his sophomore year. The two have been inseparable since.

“We pretty much spend the entire day together each day at school,” Carr said.

Carr said it was the idea of his assistant coaches and the other players on the team to get Collin really involved on the floor in the game, to create a special moment for him – and for the entire school.

“(They) kind of threw out the idea of how cool it would be if Collin suited out on senior night and played,” Carr said. “Everyone was immediately all for it and wanted to see it happen. Although at first, he wasn’t really down to do it, he eventually came around and said he would.”

Collin got encouragement from the other kids on the team, and from the coaches, who kept lifting him up.

“I refused to let him back out,” Carr said. “In the end, he came around full-circle and was so excited to play (Friday) that he wore his game shoes all day long.”

Carr said the first thing Collin did yesterday when he got to the basketball office was try on the uniform and to ensure it fit. “He was ready to roll,” Carr said.

The game wasn’t really competitive by the fourth quarter, but Carr said Harmony’s players and coaches were very classy. “That was the best part,” Carr said. “They deserve a ton of credit for understanding the situation and allowing Collin the opportunity to play and make some shots. Coach (Clint) Helpenstill was great about it from the start to finish, and so were his players and their fans. Some of his guys even high-five’d Collin after he scored.”

Carr said the school is hoping that ESPN’s “SportsCenter,” the network’s flagship news and highlights program, will pick up the video in the coming days.

Collin’s mom, Melissa, said her son feels the same way about his coach that Carr does about him. “Coach Carr has been just amazing,” she said. “He’s not just a coach; he’s a mentor.”

Melissa said she didn’t have reservations about the idea, but that Collin told her he was confident and wanted to do it. “I asked him if he was sure,” she said. “And he was. And he did great.”

Collin was introduced with the other seniors prior to the game, and eventually got that big moment.

And now, the Cardinals have to finish out the regular season and look to the postseason. With Sabine’s win over Harmony, and a White Oak loss to Winona, the Cards are up to having third place in district all alone, and have already clinched a playoff berth. Sabine plays at West Rusk on Monday night, starting with the junior varsity at 5. If they can beat the Raiders – and West Rusk certainly will be a challenge – then Sabine will wrap up third.

Arp has first place wrapped up. Troup is second, and currently, Sabine and then White Oak.

Going into Monday’s regular season finale at West Rusk, the Cardinals are 15-13 overall, and 8-5 in district play. Carr is assisted by Connor Sharp and by Jason Heffner.

Also for Sabine in the game, A.J. Gresham had 13 points and 10 rebounds. Bre’den Ford had nine points and David Robinson, eight. Savoy Goodwyn had seven points and 15 rebounds.