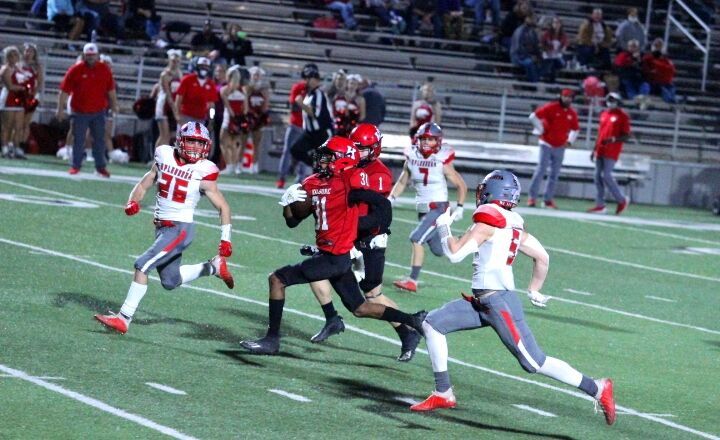 Matthew Tyeskie (31) breaks free for Kilgore against Splendora, a 42-0 blowout last week. The Bulldogs (8-3) head to Sheldon ISD Stadium in Houston on Friday for a 7 p.m. kickoff against El Campo (9-1). Below: Jermaine Roney isn’t levitating; he’s diving for the end zone. He came up a bit short, but Kilgore scored two plays later. 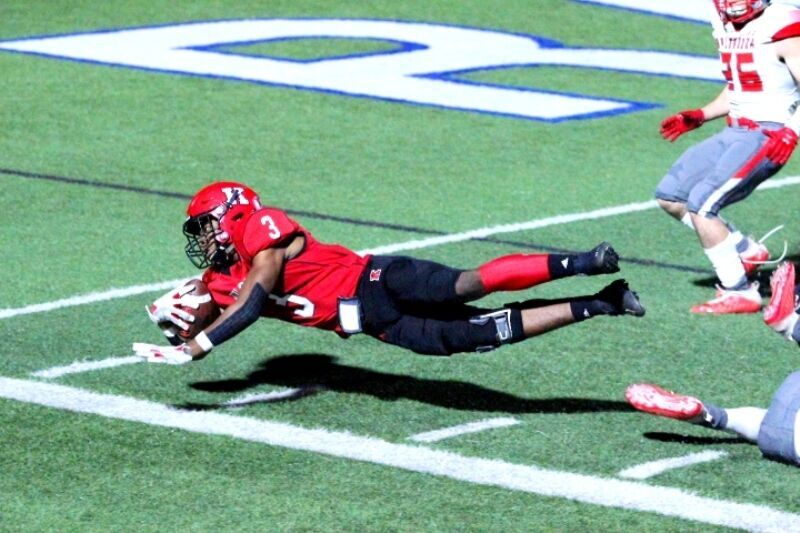 Matthew Tyeskie (31) breaks free for Kilgore against Splendora, a 42-0 blowout last week. The Bulldogs (8-3) head to Sheldon ISD Stadium in Houston on Friday for a 7 p.m. kickoff against El Campo (9-1). Below: Jermaine Roney isn’t levitating; he’s diving for the end zone. He came up a bit short, but Kilgore scored two plays later.

Kilgore and El Campo are certainly no strangers on the football field – it seems that every lengthy Kilgore playoff run in recent years has included a meeting with the Ricebirds, most recently 2017.

That meeting, and another meeting back in 2004 as Kilgore was in route to an unbeaten season and a state championship, are playoff glories from the past.

But the two programs meet again this Friday, in Houston, with a third-round ticket as the prize.

Kilgore (8-3) plays El Campo (9-1) on Friday night at brand-new Sheldon ISD Stadium in Houston, a 7 p.m. kickoff for this University Interscholastic League Class 4A, Division I area, or second, round playoff.

The season is, of course, over for the losing team; the winners will meet either Brazosport (4-6) or Huffman-Hargrave (9-1) next week.

The KHS-El Campo game will be streamed online – follow the links from the school’s website, kisd.org, to do so, or hear the broadcast of the game via Ragin’ Red Broadcasting on KDOK 105.3-FM, or online at kdok.com.

For tickets, you have to buy them online, and that includes at the gate. They are $7 each, and Sheldon ISD is asking for people to wear face coverings and to social distance.

A disclaimer, from SISD: each person may bring in a clear plastic bag, or a one-gallon clear plastic freezer or ZIPLOC bag, or similar.

Although El Campo has been a frequent opponent of Kilgore’s over the years, the Ricebirds are far enough away that most KHS fans don’t keep up with them.

This season, El Campo is 9-1 overall, went 5-0 in their district, and only allowed about 18 points a game, and averaged about 42 points a game, a dominating series of performances, except the one loss – a 39-27 loss to Port Lavaca Calhoun on Sept. 11. The Ricebirds have won eight straight games, including a roasting of Houston Yates, 63-6, last week in the first round of the playoffs.

Statistics can sometimes be deceptive, but the Ricebirds don’t throw the ball a lot, although who knows exactly the game plan they’ll have for Kilgore. Against Yates, quarterback Cullen Braden, a senior, threw just two passes and completed only one, for 42 yards. El Campo did its damage on the ground, to the tune of 372 yards rushing.

Johntre Davis had 121 yards on just six carries, and three touchdowns. Rueben Owens II had 105, and two scores. Braden, Kyle Balcar and Reed Jung each had a touchdown run.

El Campo had an eye-popping eight sacks in the game, with Jacob Lopez and Oziel Alanis each recording two, and created havoc for the Yates offense: El Campo caused and recovered three Yates fumbles and Charles Shorter got an interception for the Ricebirds that he returned 65 yards.

That pattern of keeping the ball on the ground holds true for El Campo all year: they average an amazing 365 yards rushing a game.

While El Campo was running through the bulk of its season like a hot knife through butter, Kilgore played arguably a more difficult schedule, but won seven out of 10 regular season games.

Coach Mike Wood’s Bulldogs completely dismantled Splendora, 42-0, last week in a rare playoff game here at home, at R.E. St. John Memorial Stadium. But the Ragin’ Red are used to going all over the place for playoff games, so they’ll likely have a strong turnout Friday night at Sheldon ISD for El Campo. The KHS band and Hi-Steppers are performing, as well, for the first time for a road game all season.

Josh Kennel is the center on the line, which was thought of as inexperienced when the season began, but not now. Others include Devin Coleman, Cayden Croley, Christian Estrella, and Francisco Morales.

That line has helped Epps and others gain 2,042 rushing yards this year, and produced a 2,031-yard passer in McElyea. Epps leads the team far and away with 1,606 yards rushing and 21 touchdowns on 181 carries, and he’s hitting 8.9 yards a carry. He’s only fumbled the ball and lost it once this season, knock on wood.

McElyea has 105 yards rushing and three touchdowns. Ken Anderson has rushed for 191 yards and a score. Jermaine Roney has ran for 99 yards and two scores, and Davin Rider has a touchdown to go with 37 yards. And Donovan Adkins, who excels as a defensive back, receiver and return specialist, also has a rushing touchdown to his credit.

In the passing game, McElyea has been the most prolific passer since Cooper Coldiron’s senior year at KHS in 2012. McElyea has completed 131-of-203 passes for 2,031 yards, 19 touchdowns and eight interceptions.

Alex Chavez has 57 tackles, seven for loss and two sacks; Chris Ervin has 55 tackles, for four loss; Kaden Kenney has 47 tackles up front and two sacks, and leads the team with 17 quarterback hurries; and Brantley Propes has 39 tackles and three sacks.