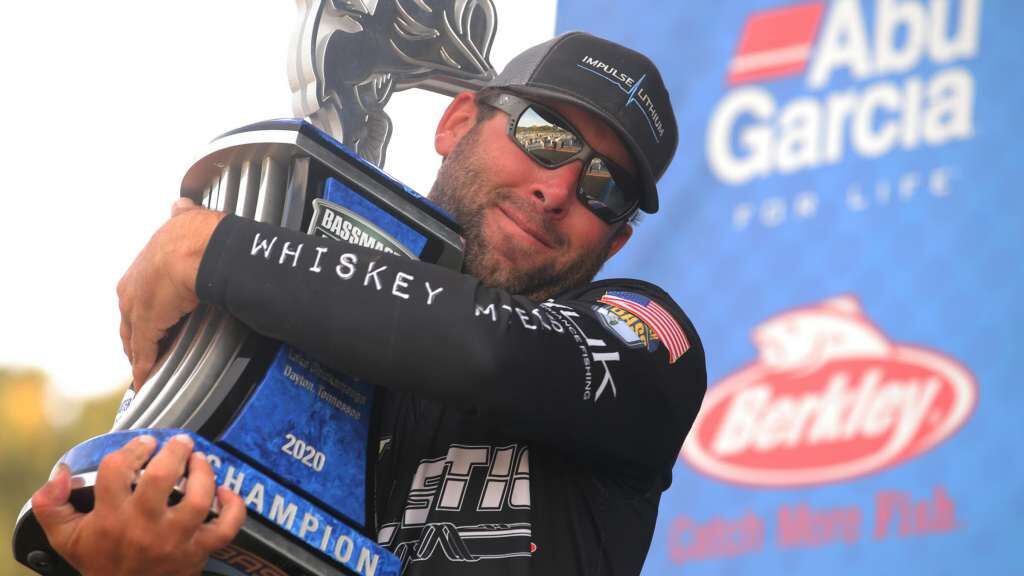 Lee Livesay (above), a Kilgore High School alumni, holds tightly his trophy for winning the Guaranteed Rate Bassmaster Elite at Chickamauga Lake in Tennessee over the weekend. Livesay had a catch total of 58 pounds, two ounces. 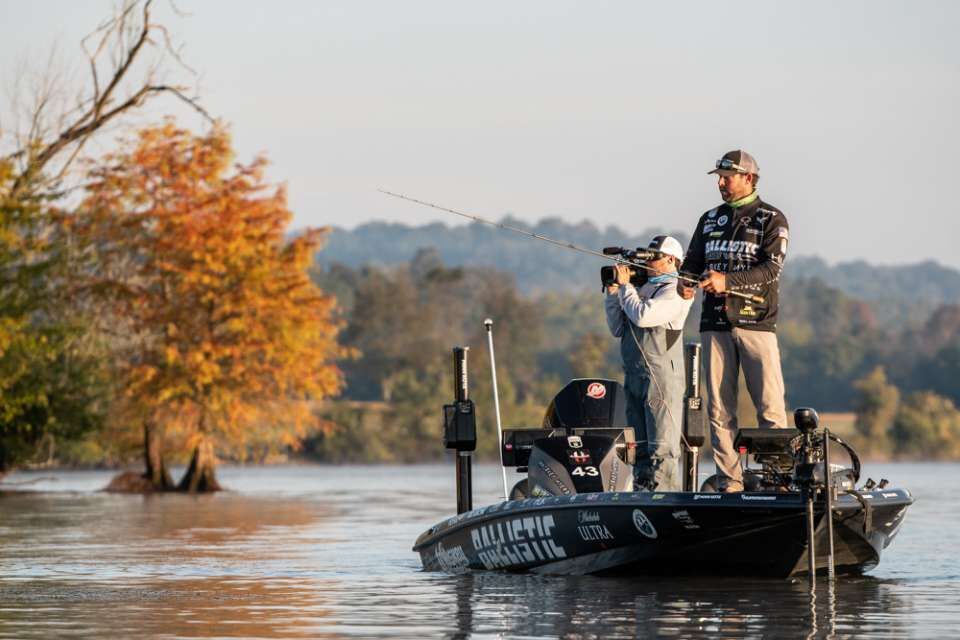 The calm before the storm: Kilgore’s Lee Livesay embarks on his last day of the Guaranteed Rate Bassmaster Elite at Chickamauga Lake. Livesay would go on to win the Bassmaster event. 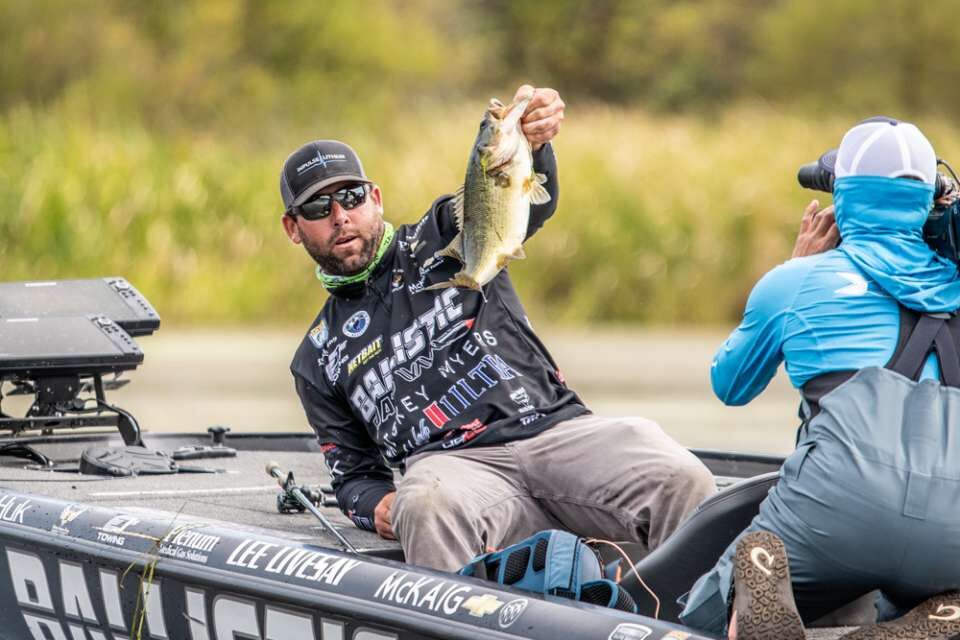 Lee Livesay, from here, adds to his catch total during the Guaranteed Rate Bassmaster Elite over the weekend in Tennessee.

Lee Livesay (above), a Kilgore High School alumni, holds tightly his trophy for winning the Guaranteed Rate Bassmaster Elite at Chickamauga Lake in Tennessee over the weekend. Livesay had a catch total of 58 pounds, two ounces.

The calm before the storm: Kilgore’s Lee Livesay embarks on his last day of the Guaranteed Rate Bassmaster Elite at Chickamauga Lake. Livesay would go on to win the Bassmaster event.

Lee Livesay, from here, adds to his catch total during the Guaranteed Rate Bassmaster Elite over the weekend in Tennessee.

DAYTON, Tenn. — Lee Livesay had options, but he committed to a singular game plan based on patience and execution to win the Guaranteed Rate Bassmaster Elite at Chickamauga Lake with a four-day total of 58 pounds, 2 ounces.

Livesay received congratulations from folks on Facebook, several from Kilgore, and some who were very influential in his early days: Wanda Vallery, the wife of former KHS football coach and athletic director Mike Vallery, told of how Livesay would come fish in their pond in the afternoons.

Current Kilgore football defensive coordinator Chad Loper posted a picture of Livesay, with Loper, in his congratulations message. And there were dozens more.

On Day 1, three of the fish that made up his 10th-place sack ate a football-head jig — one on a Hiwassee River bluff and two by the Highway 60 Bridge. He caught the other two by fishing a Scum Frog Launch Frog over main-lake grass mats, a technique that accounted for each of his bass the final three days.

“I stayed in between the Dayton Boat Dock and the Highway 60 Bridge the whole time (Days 2-4),” Livesay said. “It was so tough, you had to keep your bait in the water the whole time. That area is where I had the most bites.

Livesay was particular about the types of mats he fished, with seclusion and current flow topping his criteria. Also, venturing far into the mats’ shallowest reaches allowed him to target bass that see little to no fishing pressure.

“Quiet was the deal for me, so I was push-poling into the area with no trolling motor noise,” he said. “Also, there’s a lot of tiny shad around the outer edges of the mats, but the shallower you got, the fewer shad you’d have. They were eating bream about the size of my frog.”

Alternating between black, white and yellow frogs, Livesay added tungsten weights to the baits to improve casting distance and create attention-getting noise. Most importantly, the additional weight created a deeper impression in the mats and made the frogs easier for fish to track.

“I was making long casts and working my bait fast,” he said. “I’d let it sit for (a few seconds) to let the fish get comfortable, but then I’d start working it fast again. When I’d move it again, I’d want them to be looking for it. It’s all reaction.”

On Championship Monday, Livesay said he knew the afternoon bite would offer his best opportunities, as increasing sunlight predictably positions fish under mats. After catching his first keeper around 9:50 a.m., he steadily compiled a solid limit of 2- to 2 3/4-pounders (estimated weights) before finding one that went about 4 pounds at 1:36. A late-day cull secured his winning weight.

He also kept a swimbait on his deck for fish that he saw busting shad on the edges of mats but ended up catching all of his fish on the frog.

Visibly overcome with emotion as B.A.S.S. emcee Dave Mercer announced his victory, Livesay summarized his tears: “I’ve been wanting this my whole life. That’s 35 years of dreaming and a lot of hard work.”

Mike Huff of Corbin, Ky., finished second with 56-6. Mounting an impressive comeback effort, Huff placed 50th on Day 1 after finding only three keepers for 6-12. Catching a Day 2 limit of 12-3 moved him into 33rd and adding the event’s second-heaviest bag — 19-1 — on Day 3 pushed him up to third. His Championship Monday limit weighed 18-6.

Huff caught his fish on bluffs with a 3/8-ounce Cumberland Pro Casting Jig with a Berkley PowerBait MaxScent Creature Hawg trailer. He turned in the event’s most exciting performance Monday thanks to a 7-13 largemouth that dramatically changed his outcome.

“I was targeting bluffs with laydowns and current breaks,” Huff said. “That was key; they were sitting right behind those laydowns.”

Jake Whitaker of Fairview, N.C., stuck with his comfort zone, fished a unique pattern and finished third with 49-0. Committing to a marina, he dialed in a few particular boat slips that held a lot of bait and a dependable supply of bass.

“I pulled out a fluke, caught two keepers and I said, ‘Okay, there are some keepers in here. But for that place to last for four days, that’s just the good Lord blessing me.’”

David Mullins of Mt. Carmel, Tenn., remains in the lead for the Bassmaster Angler of the Year with 623 points, while Austin Felix of Eden Prairie, Minn., follows in second with 618. Clark Wendlandt of Leander, Texas, is third with 607, followed by Whitaker with 594 and Kyle Welcher of Opelika, Ala., with 592.

The tournament was hosted by the Rhea County Economic Development & Tourism Council.

The next Bassmaster Elite event, ironically, will be the 2020 Toyota Bassmaster Texas Fest benefiting Texas Parks and Wildlife Department – at Lake Fork, a lake Livesay has pretty much called home in recent years as a guide.