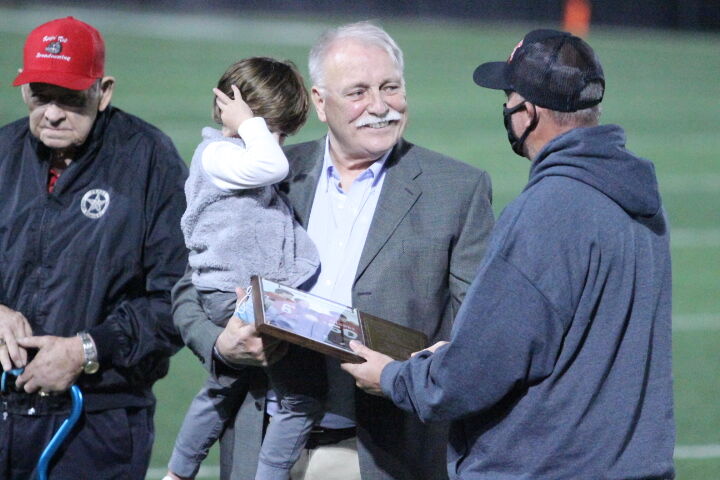 Left: Kilgore High School teacher Kenny Ferro (left) smiles as he and Bob Bustin were presented plaques for induction into the school’s Wall of Honor, Kilgore High’s athletics hall of fame. Ferro was the Bulldogs’ longtime offensive coordinator and offensive line coach, including during Kilgore’s special run of 2003-04, which culminated in a 16-0 season and the 2004 UIL Class 4A, Division II state championship. Right: Kilgore native and resident Bob Bustin, a football standout at both KHS and Kilgore College, waves to the crowd during the ceremony, conducted at halftime. 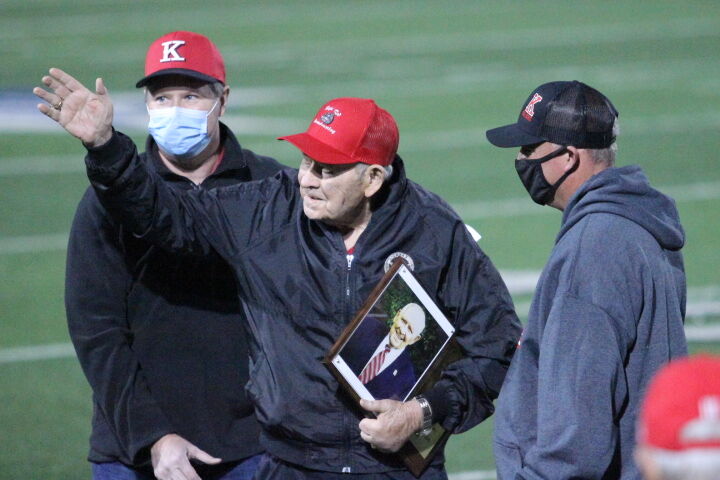 Left: Kilgore High School teacher Kenny Ferro (left) smiles as he and Bob Bustin were presented plaques for induction into the school’s Wall of Honor, Kilgore High’s athletics hall of fame. Ferro was the Bulldogs’ longtime offensive coordinator and offensive line coach, including during Kilgore’s special run of 2003-04, which culminated in a 16-0 season and the 2004 UIL Class 4A, Division II state championship. Right: Kilgore native and resident Bob Bustin, a football standout at both KHS and Kilgore College, waves to the crowd during the ceremony, conducted at halftime.

Kilgore High School’s Wall of Honor, an athletics hall of fame for the school for all sports, includes some of the brightest, most recognizable athletes, coaches and contributors in the school’s history.

Friday night at R.E. St. John Memorial Stadium, two more were added – men without whom there might not even be such an honor.

Both Bob Bustin, a former Kilgore High School and Kilgore College football standout, and Kenny Ferro, who has been a part of so many lives at KHS as both a football coach and a teacher, were inducted in the Wall of Honor Friday night, in front of a large crowd at the Kilgore-Lindale game.

Kilgore did lose the contest, with Lindale clinching the District 9-4A, Division I title (see our story in sports today), but the Bulldogs took it down to the final wire, preparing for a playoff run next week.

Bustin, it happens, was a member of the very first football district championship team in KHS football history. And Ferro was the offensive coordinator and offensive line coach for the school’s 2004 unbeaten state championship football team.

In order to make the Wall of Honor, one has to be nominated, and a pair of very special people did so: the late Rev. Earl “Buddy” Duggins, of Forest Home Baptist Church, nominated Bustin, and Billy Slagle, now an attorney and in ’04, the intellectual center for the Bulldogs, nominated Ferro.

The words of both Slagle and Duggins were nothing short of eloquent.

Duggins explained that Bustin was a native of Kilgore, born here in 1935 and a 1954 KHS graduate, who helped the Bulldogs claim that first district title in the 1953 season over Texas (Texarkana) High.

Bustin was first-team all district – on both offense and defense – that year.

He went on to star for the Kilgore College Rangers football team under coach Jasper Flanakin and helped KC go 9-1, win the Longhorn Conference championship, and earn All-Longhorn Conference honors at center, in addition to honorable mention All-American honors.

Oh, and by the way, he was also voted East Texas’s most outstanding athlete that year – as a center.

Bustin went on to graduate from Baylor University and return here, serving the community both as a 12-year member of the Kilgore City Council and a firefighter, as well as on the Laird Hospital board. He remained active with sports, serving as the president of the Kilgore Boys Baseball Association for 35 years, a job that many will attest is not an easy one. He also served as state director of Dixie Youth Baseball, and vice president of Dixie Youth, nationally.

In addition to his wife, Sally, his sister, Mary Ann Baker, was able to be present for the induction. Bustin has one son, Bobby, a daughter-in-law, Sherry, two grandchildren, Ryan and Bethany, and four great-grandchildren.

And if Kilgore is having a sports event today, or Kilgore College, as well, there’s Bustin, sitting in the crowd taking it in.

As for Ferro, Slagle had originally written the letter a while back, but told of himself and Jordan Moore as sophomores, learning under Ferro, which Slagle referred to as “a baptism by fire by an ornery Cajun who wouldn’t accept anything but our best effort.”

Slagle’s father, John, and brother, Josh, both played at Kilgore – Josh is younger than Billy. But Slagle described a coach that helped guide Kilgore not only to success off the field, and that special undefeated season that Kilgore fans remember, but grown men off it.

“I show my bias in saying so,” Slagle wrote, “but, in the game of football, it’s evident to me that any great team starts with its O-line. Consequently, without coach Ferro developing the talent he had in front of him and making it work when he didn’t there would be no 2004 Kilgore 4A Division II state champions.

“Just as important as his impact on the field, off the field coach Ferro was a father to hundreds of young men, many of whom first came under his tutelage as aimless, immature boys – boys who needed direction, discipline, and an exemplar to model themselves after in order to make the difficult transition into adulthood. I was and am lucky enough to have a strong, present father figure in my life, but many of my teammates and undoubtedly many of the players coach has interacted with in his long career had no such father figure. Coach had no qualms inserting himself into the day-to-day lives of his players to make sure that they were doing all right and keeping out of trouble.

“…Perhaps most telling of his impact, Coach still had that invaluable mark as a father figure on my life despite me having no lack of a father figure – even in my adult life, 10 years after I last took off the helmet, I often think of Coach and consider what he might think of my choices or performance in any given endeavor I may engage in, both personally and professionally. Without question, the boys and then men who passed through the field house doors at KHS and played under coach Ferro were influenced, as I was.”

Ferro began teaching special education students in 1970, and began his coaching career that same year. It has taken him to numerous stops over 50 years, from LSU and Tulane to the halls at Kilgore High School. He got some national attention a few years ago when one of his former students, Kevin Mawae, was inducted into the Pro Football Hall of Fame. Mawae wanted Ferro at Canton, Ohio for the induction, and spoke about Ferro during his acceptance speech.

“We were never just your players,” Mawae told Ferro, who was sitting in the crowd. “We were always your boys. You taught me that if you love your players, they will return it with effort and execution. The relationship was more important than the coaching.”

Many such stories, and not just from athletes but also from former students, would likely get told here about Ferro, who is still on staff at KHS as credit recovery teacher.