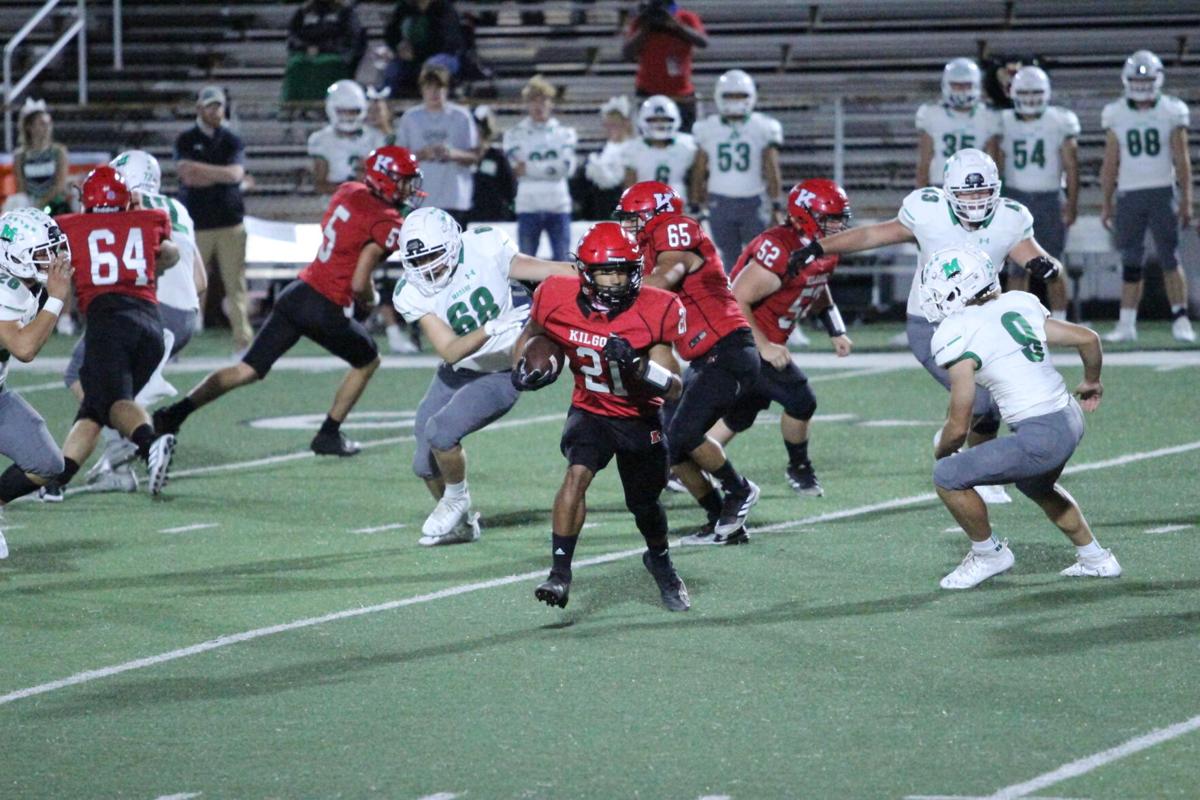 Kilgore’s Tray Epps (21) had a pair of first-half touchdowns and lifted the Bulldogs to a big lead, en route to a 35-7 win over Mabank here at R.E. St. John Memorial Stadium. Below: Kilgore’s Marcaelin Caraway (17) and Corey Rider (11) are among the Bulldogs wrapping up Mabank’s Davontae Lowe. KHS (4-2, 2-0 in District 9-4A, Division I) visits Chapel Hill next Friday. 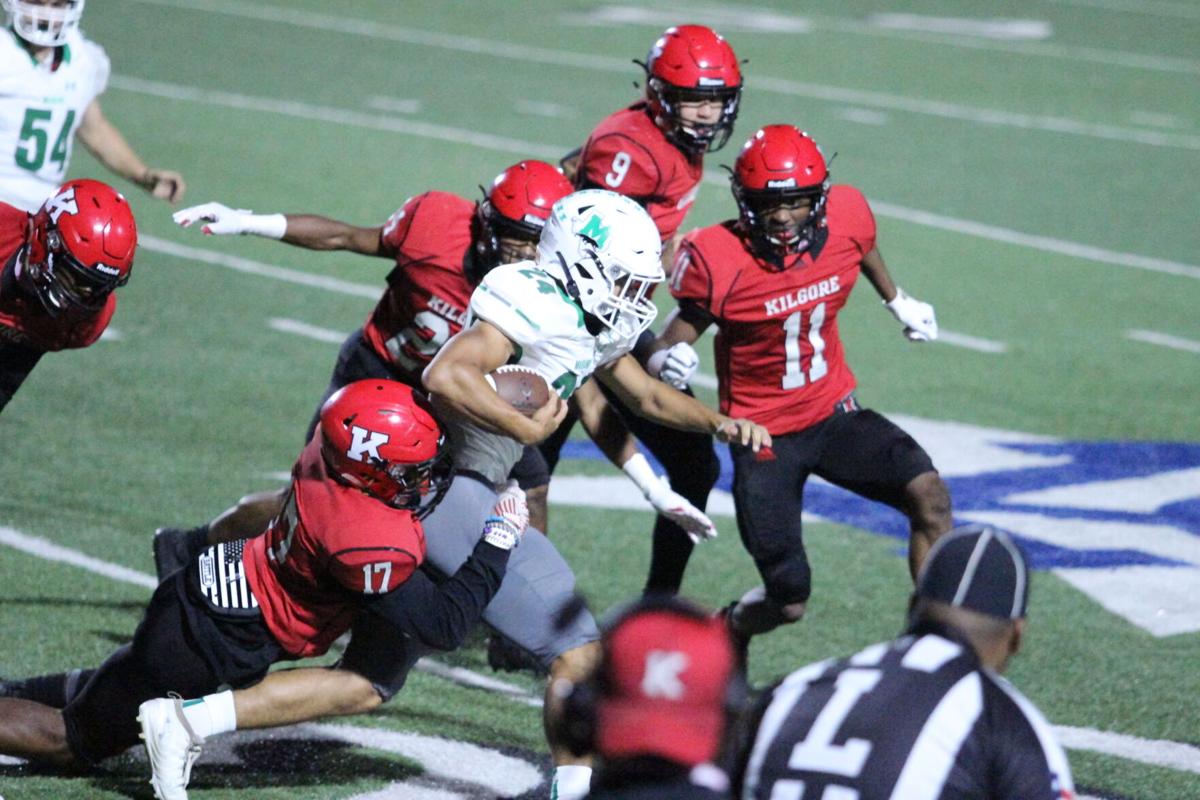 Kilgore’s Tray Epps (21) had a pair of first-half touchdowns and lifted the Bulldogs to a big lead, en route to a 35-7 win over Mabank here at R.E. St. John Memorial Stadium. Below: Kilgore’s Marcaelin Caraway (17) and Corey Rider (11) are among the Bulldogs wrapping up Mabank’s Davontae Lowe. KHS (4-2, 2-0 in District 9-4A, Division I) visits Chapel Hill next Friday.

It might have been Kilgore’s annual Pink-Out game, but it was also a Green-Out Friday night at R.E. St. John Memorial Stadium – Mabank green.

Kilgore’s Tray Epps made sure of it.

Kilgore scored early and often, led by running back Epps’ four touchdowns, and blistered the Panthers, 35-7, here Friday night. Quarterback Dalton McElyea and Donovan Adkins hooked up a couple of times, and Brian Brown once, to set up a few of Epps’ scores, but he also had a 69-yarder.

Kilgore tuned the first possession into points early. McElyea completed a third-down conversion pass to Matthewe Tyeskie for 15 yards, and then Tray Epps reeled off a 28-yard run, down to Mabank’s 7-yard-line. McElyea scored less than two minutes into the game on a quarterback sneak on the next play, giving the Bulldogs a 7-0 lead (with Chris Baldazo’s extra point) after a six-play, 50-yard drive.

The ‘Dogs added more on their next drive – a one-play drive, in fact, a 69-yard run by Epps after the defense held Mabank to a three-and-out. Kilgore led 14-0 before the seven-minute mark of the first quarter.

Mabank’s slow-bleed running game allowed them to put together a clock-eating drive to just about run out the first-quarter clock. Kilgore’s defense forced a turnover on downs with a minute and a half left, and held the ball into the second quarter.

Kilgore added more. McElyea found Donovan Adkins on a 28-yard catch, down to the Mabank 1, and then Epps finished it on the next play. Baldozo’s kick made it 21-0 KHS with 10:47 left in the half.

Probably only a tipped-ball interception by Mabank’s Jordan Nguyen prevented the Bulldogs from leading by more. Mabank got that turnover, and had its biggest play of the game, a 39-yard run by Cody Chapman. Davontae Lowe scored three plays later on a 5-yard run. Mabank recovered a fumble on the kickoff, with 22 seconds left in the half. But Kilgore’s defense stood up, leading to the halftime score, 21-7 Kilgore.

A mistake – a high snap on a punt on Mabank’s first series – allowed Kilgore to add to its lead. Kilgore didn’t recover the punt, but took over on downs at Mabank’s 42. McElyea and Adkins hooked up for a 13-yard pass, and then Brian Brown caught a 14-yarder to set Epps up once again. Epps didn’t disappoint, scoring on a 5-yard run, his third touchdown of the game. Kilgore led 28-7.

A 45-yard pass to Adkins put Kilgore in business at Mabank’s 5, and Epps made his touchdown count a quartet, his fourth score of the night. With 3:35 left, Kilgore led 35-7.

Kendarrius Anderson ran hard late, including runs of 23, 17 and 13 yards, and finished with 59 yards.

McElyea finished up completing 10-of-14 passes for 158 yards, and that tipped-ball interception. Adkins caught four of those passes for 96 yards. Dadrian Franklin had two catches for 15 yards.

Also, Matthew Tyeskie, Cade Pippen, Brian Brown and Corey Rider each had a catch. Baldazo went 5-of-5 in extra points.

Linebackers ruled this game for KHS on the defensive side. Brown had eight tackles; Chris Ervin and Eli Caruthers each had seven. Adkins and Hunter Lewis each had four, Davin Rider had three. Kaden Kenney, Marcaelin Caraway and Brantley Propes each had two, and Alex Chavez and Corey Rider each had one.

Ervin, Chris McGee, Jacari Banks, and Peyton Christian each had a tackle for loss. Lewis had two quarterback hurries, and Kenney had one.