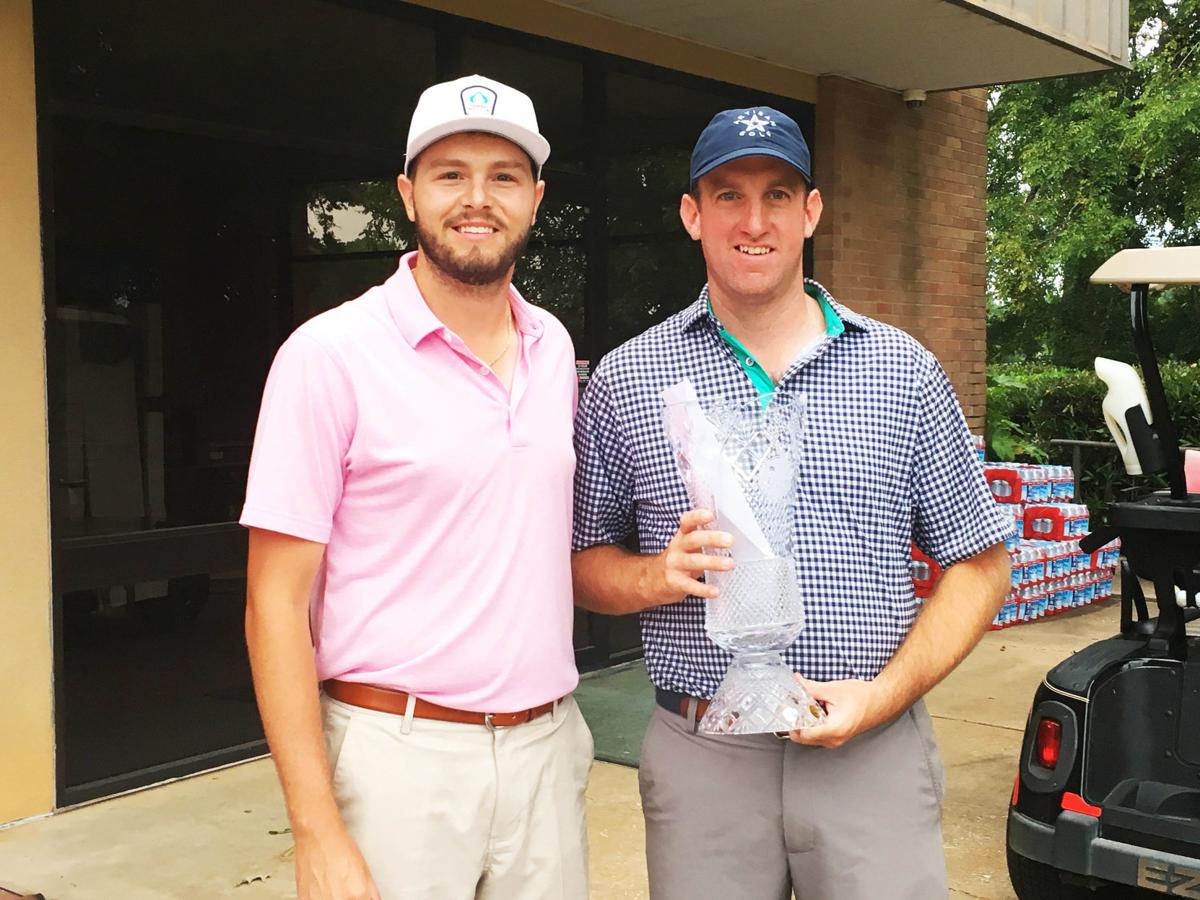 Last year, it was former college standout Andrew Presley (right) taking the trophy as champion of the Energy Weldfab Meadowbrook Classic from EW’s Michael Clements. Presley will be back to try and defend his title when the classic officially begins July 10. 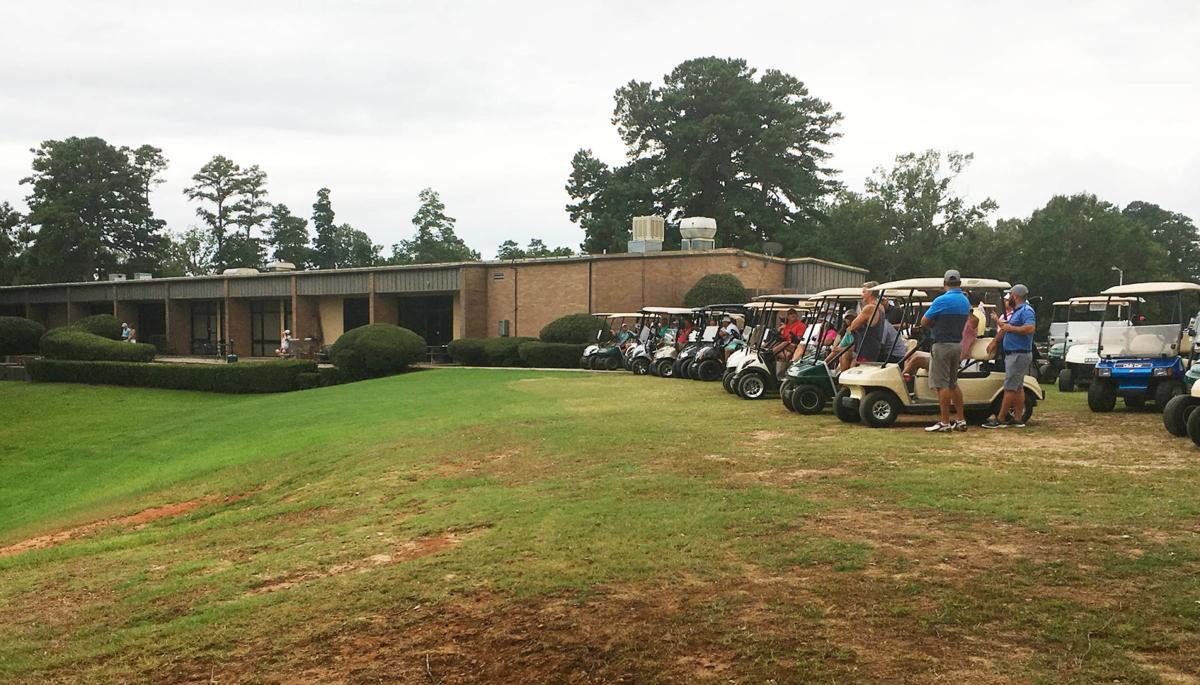 The gallery watched Andrew Presley win the Energy Weldfab Meadowbrook Classic last year. This year, there'll need to be social distancing, but when the leaders make the trip to the final hole, there's sure to be spectators looking on. The Classic dates back to 1937, and is invitation-only. (File photo by MITCH LUCAS)

Last year, it was former college standout Andrew Presley (right) taking the trophy as champion of the Energy Weldfab Meadowbrook Classic from EW’s Michael Clements. Presley will be back to try and defend his title when the classic officially begins July 10.

The gallery watched Andrew Presley win the Energy Weldfab Meadowbrook Classic last year. This year, there'll need to be social distancing, but when the leaders make the trip to the final hole, there's sure to be spectators looking on. The Classic dates back to 1937, and is invitation-only. (File photo by MITCH LUCAS)

It seems like it’s only been a few months since the last one, but it’s time again for the Meadowbrook Classic, one of the oldest golf tournaments not just in East Texas, but in the entire state.

Meadowbrook Golf and Event Center will welcome excellent golfers back to one of the state’s best nine-hole courses next week for another July classic – practice rounds can be played next Thursday, July 9, and then the three-day tournament begins Friday.

Things will conclude Sunday afternoon, likely with a gallery following the leaders as they make that final trek to the last hole.

Club pro David Cline said the course encourages the gallery again this year, but asks that social distancing be in place – stay at least six feet apart from the nearest party.

Golf begins each day with tee shots about 7:30. The tournament is by invitation only, and boasts annually some of the best players of all ages in the region. The championship flight players normally tee off between 1 p.m. and 2, and on that final day, of course, the leaders will wrap things up, and then the trophy will be presented.

It was revealed in June that Meadowbrook, which was founded in the early 1930s, again made the Dallas Morning News’s list of the state’s top nine-hole courses – Meadowbrook was ranked 10th on that list. The tournament, whose origin began about the time the club was founded, is in its 83rd playing. It dates all the way back to 1937, having missed only one year due to clubhouse renovations many years ago.

Although the tournament’s invitation committee is still finalizing the field, and its flights, it is believed 2019 champion Andrew Presley will be back to attempt a repeat championship, a very rare feat in this tournament.

Presley, a former college golfer at both LSU and TCU, was tied with Jared Johnson after 16 holes last year, and it looked like the tournament might be going to the even more-rare playoff. But Presley was determined to finish it.

“I knew to have a shot,” he said, “I probably needed to birdie both holes.”

He did just that: birdied both the 17 and the 18, getting off the course with just a one-stroke win over Johnson – Presley’s winning score was 213.

Former two-time Classic champion Blaine Weiterman of Overton, who won the classic in 2010 and 2012, had a great three days, but finished five strokes back and in fourth place.

Alan Clark, the 2018 champion, finished up with a 229 last year in his title defense. Clark ended decades of frustration two summers ago when he became the first “home” golfer – the first golfer from Kilgore – to win the event since 1994.

Jimmy Sawyer shot a three-day 222 to win the Masters, or first, flight – the flights in the Classic are named for famed professional courses or tournaments.

Dallas Ward shot a 232 to win the St. Andrews flight; Chris Vallery had a 241 to win the Pebble Beach flight; John David Plunk finished with a 252 to win the Pine Hurst flight; and Zane McDonald had a 253 to win the Colonial flight.

As mentioned, the Meadowbrook Classic – sponsored for quite a while now by Michael Clements’ Energy Weldfab – has been played every year except one (1955) since 1937, shortly after the course was founded. That first year, Bill Clark of Gladewater held off Henderson’s Dan Dickson to win the championship in 36 holes of medal play. Clark would win it again two years later in a match play win over eventual four-time champ Selby.

Billy Russell was the Classic’s first champion from Kilgore (1940), and then tournament would become a who’s who of Texas professional golf, with names like Jacky Cupit, Bobby Cupit, Roy Pace, and of course, Maxey. Current and longtime Meadowbrook pro David Cline, a former Texas A&M standout, has a tournament victory of his own, having beaten Eddie Welch back in 1991.

One note: the classic is on a hot streak. It hasn’t had to be shortened due to the weather since 2010.