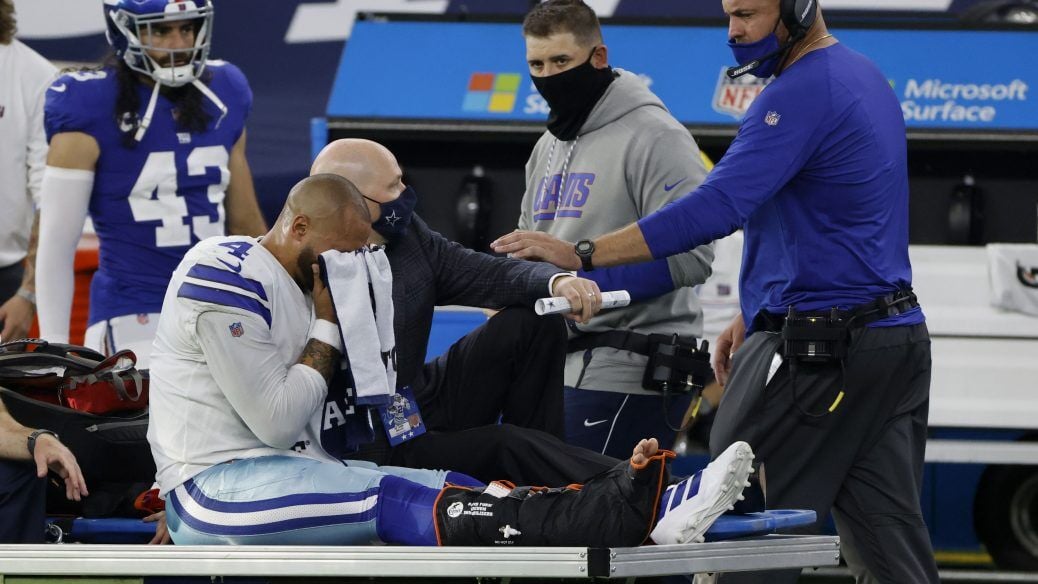 Dallas quarterback Dak Prescott (above) is carted off after a severe ankle injury Sunday at home against the New York Giants. Below: Cowboys tight end Dalton Schultz (86) consoles running back Ezekiel Elliott after the injury. The Cowboys will have to move on; they host Arizona Monday night. 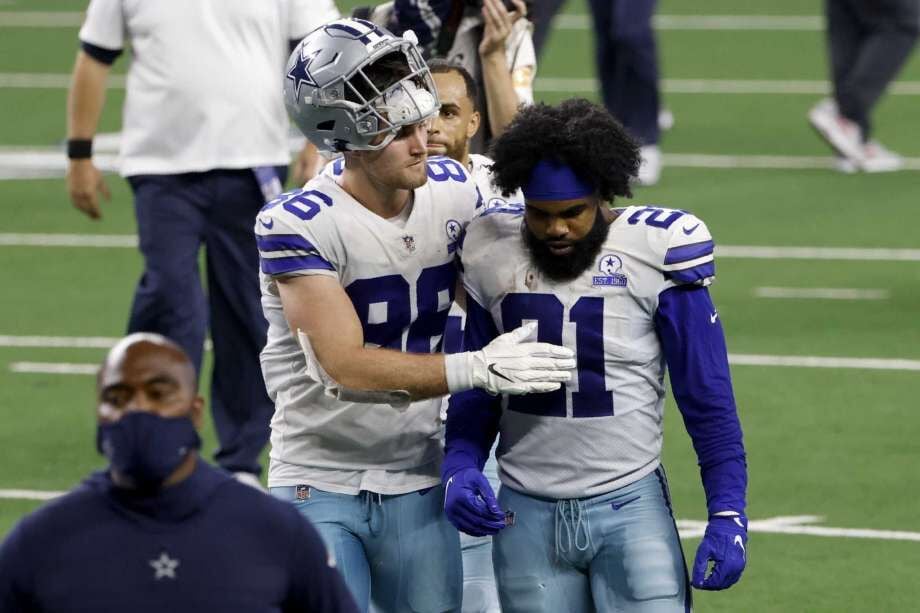 Dallas quarterback Dak Prescott (above) is carted off after a severe ankle injury Sunday at home against the New York Giants. Below: Cowboys tight end Dalton Schultz (86) consoles running back Ezekiel Elliott after the injury. The Cowboys will have to move on; they host Arizona Monday night.

ARLINGTON — Dak Prescott joined both his tackles and his tight end on the list of season-ending injuries for the Dallas offense when the star quarterback fractured his ankle in a gruesome scene against the New York Giants.

The emotional setback added to the challenge of trying to make the playoffs in coach Mike McCarthy’s first season, although the rally for a 37-34 victory behind backup Andy Dalton vaulted the Cowboys (2-3) to first place in the struggling NFC East.

“I know how much this means to him and how much being out there for this team means for him,” running back Ezekiel Elliott said of Prescott. “So, it’s hard. But all we can do right now is support him. We just gotta support ‘4’ and make sure he is good, and go out there and win ballgames for him.”

Prescott had surgery for a compound fracture and dislocation of his right ankle and the team said he was expected to be released from a hospital Monday. The two-time Pro Bowler’s lower leg got caught under New York defensive back Logan Ryan on a tackle at the end of a 9-yard run.

Left tackle Tyron Smith is out for the year with a neck issue after playing just two games, and right tackle La’el Collins never saw the field before needing season-ending hip surgery. Tight end Blake Jarwin tore a knee ligament in the opener.

The Dallas defense has been plagued by injuries as well, the latest being defensive tackle Trysten Hill’s season-ending knee injury against the Giants.

The Cowboys, who play Arizona at home next Monday night, have been without Leighton Vander Esch for a month after the middle linebacker broke a collarbone in the opener. Defensive tackle Gerald McCoy sustained a season-ending leg injury in training camp.

Cornerback Anthony Brown returned after missing the minimum three games on injured reserve with a rib issue and returned a fumble for a touchdown. Another starting cornerback, Chidobe Awuzie, is out with a groin injury.

There are also plenty of self-inflicted reasons for the rollercoaster ride, from turnovers to mistakes on special teams to plenty of blown assignments for a defense trying to learn a new scheme.

“If you look at the five games that we’ve played in, we’ve had some rough moments, but every game has come down to the end,” McCarthy said. “There are still some things that we can sync up better and I think it allows everybody to perform at a faster level. We’re going to have to make some adjustments moving forward.”

The decision to go with a proven veteran as a backup to Prescott for the first time since his rookie year in 2016 could prove huge. Dalton led Cincinnati to the playoffs five straight seasons during nine years as the starter. The problem there is an 0-4 record in the postseason (Dalton was injured for the fifth appearance, another loss by the Bengals, who turned Dalton loose in the offseason after going 2-14 and drafting Joe Burrow No. 1 overall).

After fumbling a snap to set up a go-ahead touchdown for New York, Dalton led two straight drives to field goals. Receiver Michael Gallup made spectacular sideline catches on consecutive plays to set up the winning field goal on the final play.

“I’ve stayed ready, and I’ve been ready to go into these games,” Dalton said. “I knew the situation I was in, and I was just trying my best to support Dak in whatever he was doing. But I feel like I was prepared for these moments.”

The mistakes on special teams are piling up. The Cowboys got away with one when there were completely fooled on a fake field goal for a touchdown. The play was nullified by an illegal shift penalty. Dallas later had too many men on the field on a New York punt, allowing the Giants to try Graham Gano’s 54-yard field goal, which was good.

LB Jaylon Smith has been the top target of criticism for a Dallas defense that ranked 30th in the NFL going into the New York game. He shared a sack for the first time in 13 games and had a game-high three tackles for loss.

McCarthy’s a big believer in turnover margin, and the Cowboys are still last in the NFL at minus-8. Their 11 giveaways are tied for the most, and the team’s only interception was in the opener.

Five — Rookie receiver CeeDee Lamb is the second player in NFL history with at least five catches in the first five games of his career, joining Terry Glenn (1996). Lamb had his second 100-yard game on Sunday against the Giants.

The Cowboys won’t have to wait long for a chance to take control of a weak division. After the Cardinals visit in Dallas’ third straight home game, consecutive NFC East road games in Washington and Philadelphia follow. Those teams have just one win apiece, and Dalton has a career regular-season record of 70-61-2.