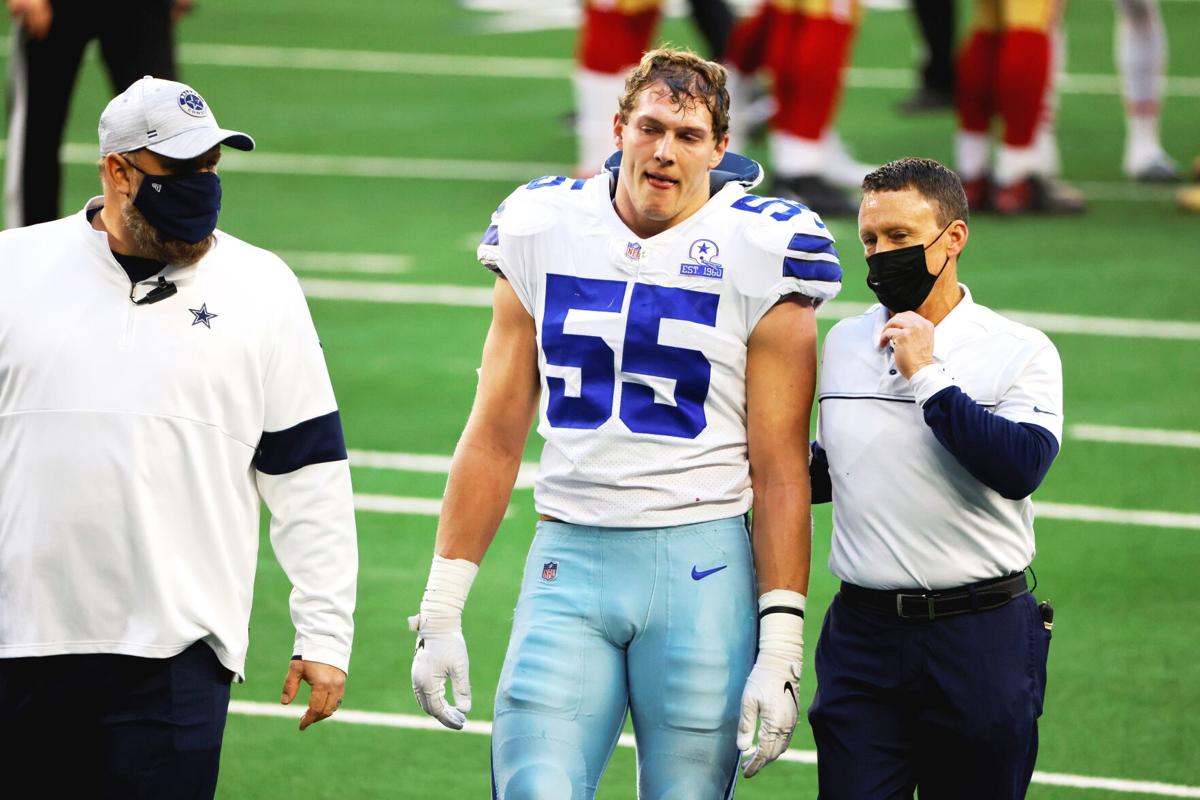 Dallas opted Monday to not pick up the oft-injured Leighton Vander Esch’s fifth-year contract option, and drafted two linebackers over the weekend, including Penn State’s Micah Parsons (above, with Cowboys owner Jerry Jones). 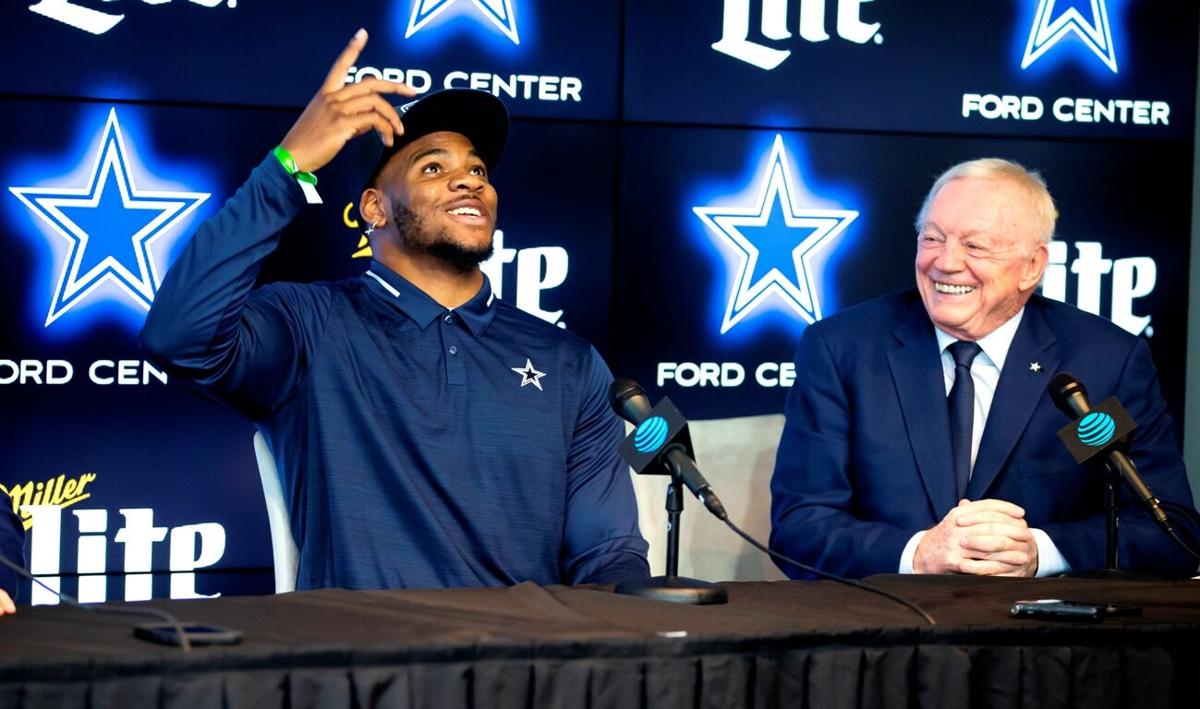 Dallas opted Monday to not pick up the oft-injured Leighton Vander Esch’s fifth-year contract option, and drafted two linebackers over the weekend, including Penn State’s Micah Parsons (above, with Cowboys owner Jerry Jones).

FRISCO (AP) — The Dallas Cowboys declined the fifth-year option on linebacker Leighton Vander Esch’s rookie contract Monday, setting up an interesting season at the position after the club used this year’s first-round pick on a potential replacement.

Vander Esch had a strong rookie season after the Cowboys drafted him 19th overall in 2018. But injuries limited him to 19 games the past two years, most notably the revelation that the former Boise State player has always had spinal stenosis, a narrowing of the spinal column that makes neck injuries more risky.

Vander Esch and 2016 second-round pick Jaylon Smith are both on notice after the Cowboys drafted Penn State’s Micah Parsons 12th overall and Jabril Cox of LSU in the fourth round.

After leading Dallas with a rookie-record 176 tackles and making the Pro Bowl in 2018, Vander Esch started having trouble with injuries in the seventh game of his second season when he injured his neck against Philadelphia. Vander Esch missed a game and returned for two before doctors recommended he sit the rest of the season and have surgery.

The neck wasn’t an issue last season, but Vander Esch broke his collarbone in the opener and missed the next four games. His production was inconsistent when he returned, and Vander Esch missed the final two games with a sprained ankle.

Smith has had similar issues with consistency since the Cowboys took a chance on him just four months after a devastating knee injury in his final game at Notre Dame. He didn’t play as a rookie, but has been a full-time starter the past three years.

The 25-year-old Smith signed a $64 million, five-year extension in 2019, but can be released without much impact on the salary cap starting next year.

The Cowboys traded down two spots to get Parsons after both cornerbacks they were targeting, Patrick Surtain II and Jaycee Horn, went before Dallas’ original position at No. 10. Cox was considered a high-value pick in the fourth round.

Owner Jerry Jones has been synonymous with offense — and the stars that go with the shiny side of the NFL — since buying the Cowboys and making himself general manager in 1989.

A defensive draft like no other in franchise history says plenty about the impact last year’s sometimes brutally bad unit had on a front office that believes the offensive pieces are in place to end a quarter-century drought without a Super Bowl.

The Cowboys got through six picks before taking their first offensive player when they had never gone more than five selections deep without at least drafting a lineman. Of the 11 Dallas selections, eight were on defense, the most for the club since the draft was reduced to seven rounds in 1994.

The first offensive choice came Saturday with Marshall tackle Josh Ball as the second of two fourth-round choices, after the club made history by taking Cox.

Dallas started the draft by trading back two spots to No. 12 in the first round, getting Parsons after letting NFC East rival Philadelphia move up to select Heisman Trophy-winning Alabama receiver DeVonta Smith.

Then came four more defensive picks on a busy second day: a pair of cornerbacks in Kentucky’s Kelvin Joseph and Nahshon Wright of Oregon State along with two defensive linemen in UCLA’s Osa Odighizuwa and Iowa’s Chauncey Golston.

During a run of three Super Bowl titles in four years in the 1990s, Jones paid big for future Hall of Fame cornerback Deion Sanders believing he could help on offense, too. The high-profile owner later ran into salary-cap trouble trying to keep “The Triplets” of quarterback Troy Aikman, running back Emmitt Smith and receiver Michael Irvin together.

On the flip side, the Cowboys let their best defensive first-round pick in at least a decade, cornerback Byron Jones from 2015, go to Miami in free agency last year because the $82.5 million price tag was too high.

“I think we did want to improve our defense,” Jones said. “I think the better way to make my answer is the fact that we were always (selecting) defensive players didn’t bother me. I didn’t feel compelled to have to throw some offensive players in there to keep thinking I was biased toward defense.”

The Cowboys gave up a club-record 307 yards rushing against Cleveland and another 294 against Baltimore — both losses — and repeatedly looked confused with blown assignments. Meantime, the offense was No. 1 in the league before a broken ankle ended Prescott’s season in Week 5.

Executive vice president of personnel Stephen Jones said the Cowboys’ approach also had to do with needing rookies for salary-cap relief coming off the $160 million, four-year contract for Prescott.

“The best way to help our salary cap is for these five players to come in here and make a difference, in some cases replace players who were going to cost you a lot more money,” Stephen Jones said after the second day of the draft.

The 11 picks were the most since Dallas had 12 selections in 2009. But that was probably the worst draft of the past two decades for the Cowboys. So there’s no proof quantity works.

Of the final five selections, three were offensive players: Ball, Stanford receiver Simi Fehoko in the fifth round, and Nebraska guard Matt Farniok with the club’s final choice in the seventh, No. 238 overall.

The other defensive choices were a pair of sixth-rounders: one of Joseph’s Kentucky teammates, 327-pound defensive tackle Quinton Bohanna, and South Carolina cornerback Israel Mukuamu.

Ball left Florida State in 2018 after being suspended following accusations of battery and reaching an agreement with his former girlfriend on a protective order against dating violence. There were no criminal charges, but Ball was barred from contacting or being near her. He transferred to a junior college before ending up at Marshall.

“Teams have obviously asked about that,” Ball said. “It happened in the past, and since then I have taken the time to grow as a human being, grow as a man. I think I have done a great job of that. I have learned from my mistakes.”

Joseph has released several albums as the rapper known as “Bossman Fat.” Joseph said “Fat” came from the family because he was a 10-pound baby. The former Kentucky player says he added “Bossman” in middle school.

“They had people ask questions about rap, but (football) is what I’ve been doing my whole life,” Joseph said. “I haven’t been practicing and sweating and bleeding for no reason. This is what I’m going to do to feed my family, my son and change my future.”