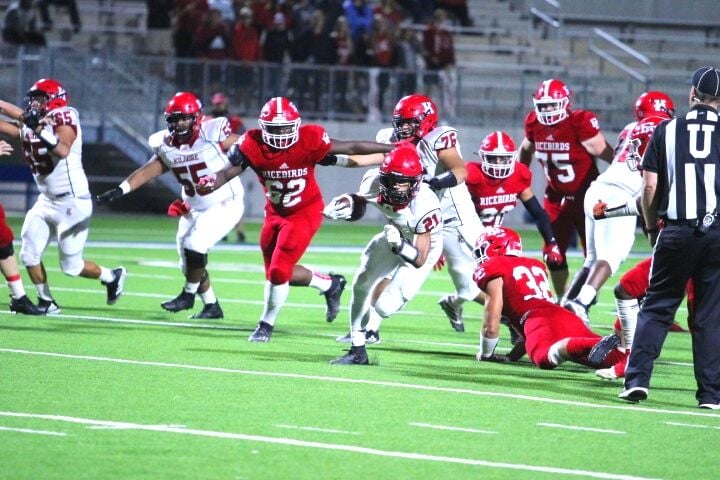 Kilgore running back Tray Epps (21, center) gets loose against El Campo, in a UIL Class 4A, Division I second-round playoff game at Sheldon ISD Stadium in Houston on Friday night. Epps ran for 108 yards and scored a touchdown in a 27-14 Kilgore win. The Bulldogs (9-3) will face Huffman-Hargrave next weekend, although arrangements were not final at press time. See kilgorenewsherald.com today for an update. 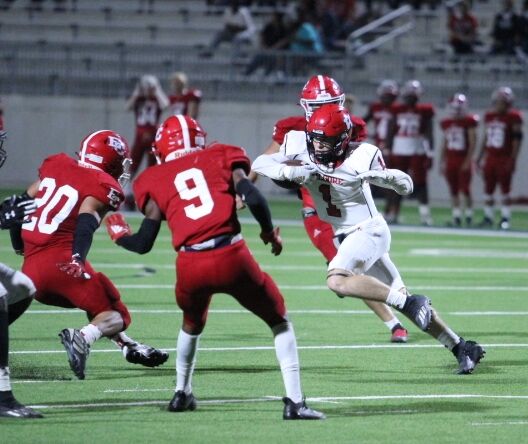 Kilgore's Cade Pippen (1) made this catch from Dalton McElyea for a key first down against El Campo Friday night.

Kilgore running back Tray Epps (21, center) gets loose against El Campo, in a UIL Class 4A, Division I second-round playoff game at Sheldon ISD Stadium in Houston on Friday night. Epps ran for 108 yards and scored a touchdown in a 27-14 Kilgore win. The Bulldogs (9-3) will face Huffman-Hargrave next weekend, although arrangements were not final at press time. See kilgorenewsherald.com today for an update.

Kilgore's Cade Pippen (1) made this catch from Dalton McElyea for a key first down against El Campo Friday night.

That question will wait for another day. But on Friday, Kilgore did outrun, outclass and outgun a Southeast Texas power, El Campo, in the UIL Class 4A, Division I playoffs. Kilgore got three first-half touchdowns, put clamps on the Ricebirds’ powerful running game, and beat El Campo, 27-14, here at Sheldon ISD Stadium, a multi-million-dollar showpiece.

Kilgore got two clutch field goals from Chris Baldazo late in the game to seal it after El Campo got within a touchdown, and El Campo’s season is over.

The Bulldogs (9-3) move, now, to the third round of the playoffs for the first time since 2017, a matchup against Huffman-Hargrave next Friday, a 7 p.m. kickoff at Jasper Stadium, in Jasper. Kilgore will be the home team for the game.

Kilgore was up two touchdowns, 21-7,over El Campo at the half, but things got a little hairy in the second half. Programs like El Campo (9-2) don’t go down easy.

The Ricebirds put together a nice drive, a 50-yard drive to open the third quarter that ended with a 1-yard touchdown run and then extra point that got the ‘Birds within a touchdown, 21-14. Kilgore’s offense only really had two miscues all night: an interception in the end zone in the first half and a fumble in the second half – right after El Campo scored. It lifted the Ricebirds and gave them the ball at midfield.

Kilgore, though, had a tremendous defensive effort all night, and got the ball right back, on an interception by Dalton Smith. Kilgore’s offense began to run clock, leaning on Tray Epps to get hard-fought yards and eat the time off. The drive stalled at El Campo’s 24-yard-line, and coach Mike Wood trotted Baldazo out. The junior didn’t blink, and hit a 40-yard field goal, giving the Bulldogs a 10-point lead with 6:48 left.

Then he got to do it again.

El Campo, on the kickoff, returned it to midfield, but was flagged for holding, and moved all the way back to its own 11. On the very first play, the Ricebirds fumbled it away. A host of Kilgore players fell on it and gave the Bulldogs the ball inside El Campo’s 15. They didn’t punch it in, but Baldazo hit another field goal, a 30-yarder, and that – combined with another pick by Dalton Smith on El Campo’s last-gasp drive – iced the game.

It was Air Kilgore on the first drive. Of the nine-play scoring drive, six of them were passes. Quarterback Dalton McElyea went 5-of-6 on the drive, the touchdown a 13-yard pass to Adkins. Baldazo’s extra point made it 7-0 Kilgore, with just over three minutes left off the first-quarter clock. Matthew Tyeskie, Jacobe Weick, and Cade Pippen also each caught passes on the drive – Tyeskie two of them, Pippen’s to convert on third down, and then the scoring pass to Atkins, his 10 th of the season.

Kilgore’s defense shut down El Campo’s big guns – running backs Johntre Davis and Rueben Owens – on the Ricebirds’ first drive and got the ball back, with a big sack by Kilgore’s Brantley Propes on third down a huge play.

The Bulldogs got the ball back and marched right down the field, including a 25-yard pass from McElyea to Brian Brown, and then a 21-yard run by McElyea. But an errant throw into the end zone was picked off by Isaiah Anderson, ending the KHS drive without points.

The Ragin’ Red buried El Campo’s running game again on its second possession, forcing another punt – it left Kilgore with great field position at the EC 37-yard-line. Kilgore made the most of the drive, including a 25-yard run by Tray Epps and on the second play of the second quarter, an 8-yard touchdown run by Epps, giving Kilgore a 14-0 lead with 11:13 left in the half.

The Ricebirds didn’t win nine games by accident, though, and one home run hit was all it took to get them right back in it, and Owens did. After Kilgore’s Chris Ervin downed the Bulldogs’ first punt of the game at the El Campo 3, on third down at the 7, Owens looked to be bottled up. Looks can be deceiving. He got out of the pack, broke free, and no one could catch him, a 93-yard touchdown run. That cut Kilgore’s lead in half and left the ‘Dogs up 14-7 with 3:48 left in the half.

But this year, this time, Kilgore would shake it off. And they’d get that lead back up on the last drive of the half.

McElyea & Company got the ball back at their own 32, and he put together four straight complete passes – one to Matthew Tyeskie, one to Jermaine Roney, one to Cade Pippen, and then finally – after McElyea ran for 11 yards down to El Campo’s 14 – a backbreaking pass to Pippen in the end zone, who fought off a defender and caught the ball for a 14-yard touchdown. Baldazo added his point, and Kilgore was back up by two touchdowns, 21-7, with 1:02 left in the half. El Campo quarterback Cullen Braden scrambled on a play right before halftime, but a pass to the middle of the field fell incomplete, leading to halftime.

In the end, McElyea finished up 19-of-25 for 172 yards, the two touchdowns and the interception in the first half. Pippen had five catches for 56 yards, a couple of key third down conversions and the touchdown; Tyeskie had four catches for 27 yards; Adkins had three for 23 yards and the touchdown on the opening series; Roney had three for 28 yards; Brian Brown had one for 25 yards; Rider had one for 8; Weick had one for 6; and Epps had a catch at the line of scrimmage that was ruled no gain.

Epps finished with 113 yards and a touchdown on 22 carries; McElyea had five carries for 35 yards. Baldazo was 3-for-3 on extra point attempts and had the two field goals; Pippen only had to punt once, and it was a 48-yarder.

Propes had a quarterback sack, four tackles and a fumble recovery. Davin Rider had 11 tackles. Caruthers and Kaden Kenney each had six; Kenney and Hunter Lewis, and Jordan Owens each had two quarterback hurries.