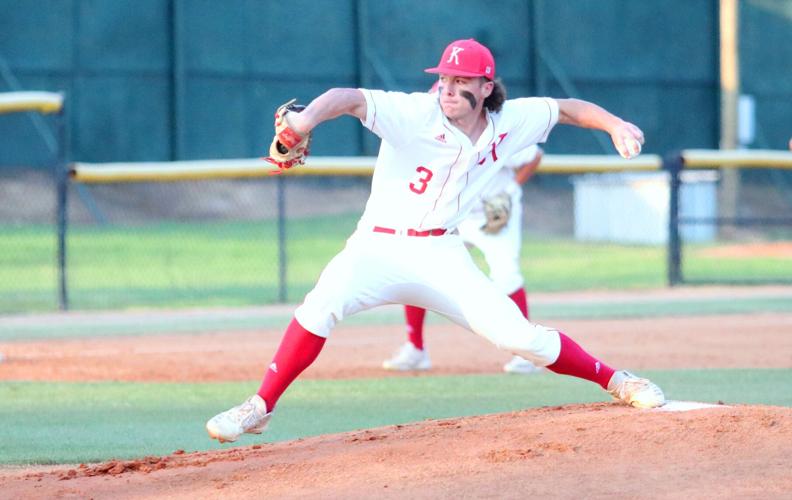 Kilgore senior Heath Lafleur (3) in mid-wind-up. Lafleur is one of a talented group of seniors that played its final game in a Kilgore uniform Thursday night, a third-round playoff game against Spring Hill. The Bulldogs’ 2022 season came to an end in a regional quarterfinal loss to the Panthers. 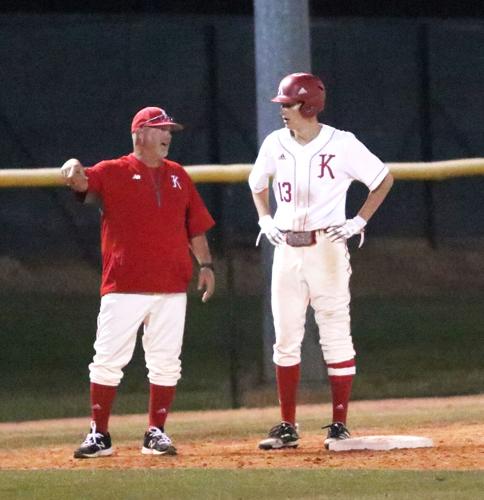 Kilgore senior Heath Lafleur (3) in mid-wind-up. Lafleur is one of a talented group of seniors that played its final game in a Kilgore uniform Thursday night, a third-round playoff game against Spring Hill. The Bulldogs’ 2022 season came to an end in a regional quarterfinal loss to the Panthers.

They fought their way into the playoffs, but Thursday night at Driller Park, the Kilgore High School Bulldogs couldn’t fight their way off a brick wall that was just too high.

The Diamond ‘Dogs’ 2022 season ended Thursday in the University Interscholastic League’s regional quarterfinal, or third round, of the Class 4A playoffs, out with a blaze of glory after knocking off defending state champion Pleasant Grove and Kaufman. Kilgore won its final six games to get into the postseason as the number four seed from its district, played above its means, beat a district champion, but just couldn’t overcome Spring Hill.

The Panthers won game one, 11-0, on Wednesday night in Longview, and then held off a scrappy Kilgore, 7-1, at Driller Park on Thursday. Kilgore, led by coach Eugene Lafitte, finished the 2022 season with a 20-13 record.

The Bulldogs were down 7-0 in the bottom of the fifth when they scored their only run of the game.

Thomas Hattaway managed a lead-off double to center field, and would score on an RBI single by fellow senior Chris Ervin. But the ‘Dogs would strand Ervin, and unfortunately, that would be the only run of the game for Kilgore, who got in trouble in the first inning, giving up three runs to the Panthers, who are district rivals for KHS.

Kilgore finished with five hits: Matthew Conner had two of them, going 2-for-2. Heath Lafleur, Ervin, and Hattaway each had one. One of Conner’s hits was a double.

Conner came on for a third of an inning, allowing two walks but nothing else. Tate Truman went 2 1/3 innings, allowing an unearned run, three walks and a hit, and notching a strikeout. And Tanner beets came on to pitch the game’s final inning, getting a strikeout and allowing no walks, hits or runs.

Easton Ballard pitched 6 1/3 innings for Spring Hill and 87 pitches. He struck out seven, allowed all five hits, one run (earned) and a walk.

Kilgore also had a rough night at Spring Hill on Wednesday, getting just one hit in an 11-0 run-rule-shortened game against the homestanding Panthers, a five-inning game that saw the Bulldogs not only run short of offense, but sputter on defense, as well: five errors. Spring Hill had seven earned runs of its 11 scored.

The Panthers scored five runs in the first inning, and five in the third, adding one in the bottom of the fourth for good measure.

Kilgore’s lone hit, unfortunately, was by Wilkerson, and didn’t happen until the top of the fourth, when the Bulldogs were already down 10-0.

But there’s plenty of reason for optimism.

The Diamond ‘Dogs have been to a state tournament under Lafitte (2019) and got within a series of another the year before. Lafitte has restored Kilgore baseball to the upper echelon of baseball programs not just in East Texas, but in the state, since his arrival just a few seasons ago.

Tate Truman, Cade Henry, Todd House – those three young men are only sophomores and contributed greatly to the varsity this season, playing big minutes all down the stretch. House was injured in an accident but returned to the lineup. All had key moments throughout the year. And Beets is just a freshman, but didn’t pitch like it. Throw in juniors like Jason Silvey and Bransin Walker; Kilgore has bright spots that will lift them in 2023.