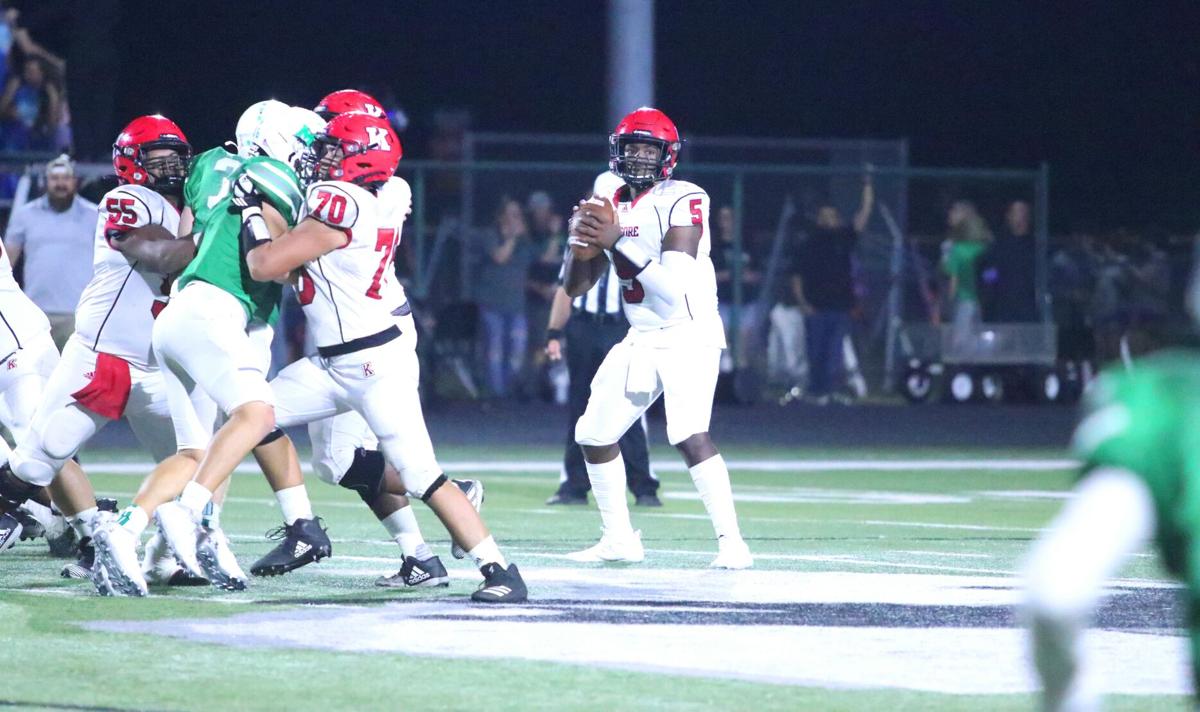 Kilgore quarterback Da’Marion Van Zandt (5) looks for a target, and he found a bunch of them, Friday night at Mabank. Kilgore won the District 9-4A, Division I game, 46-26, and is 2-0 in district play. The Bulldogs will host Chapel Hill next Friday night. Below: Omarion Smith (10) scooped up a fumble on the third play of the game and scored to set the pace of the contest, much in Kilgore’s favor. 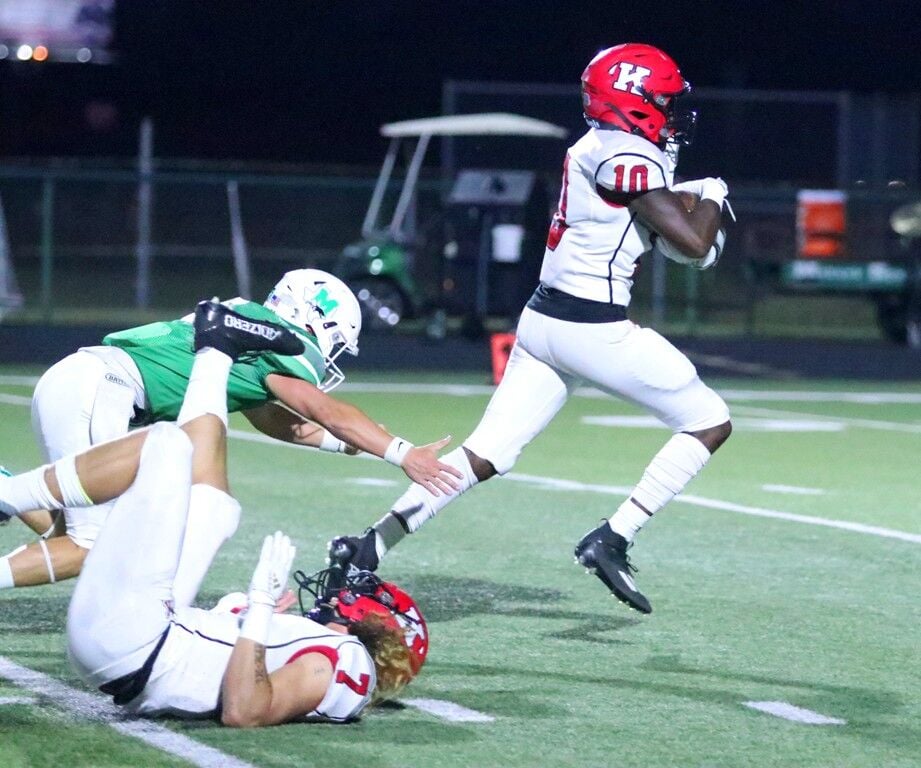 Kilgore quarterback Da’Marion Van Zandt (5) looks for a target, and he found a bunch of them, Friday night at Mabank. Kilgore won the District 9-4A, Division I game, 46-26, and is 2-0 in district play. The Bulldogs will host Chapel Hill next Friday night. Below: Omarion Smith (10) scooped up a fumble on the third play of the game and scored to set the pace of the contest, much in Kilgore’s favor.

MABANK – You’ve heard the expression, “it’s a marathon, not a sprint.”

The first half of this one was the opposite: it went from football to track meet very quickly.

Kilgore got a big night from quarterback Da’Marion Van Zandt and his receivers, from its offensive line, defense and just about everyone else, leaving Mabank with a 46-26 win that wasn’t as easy as it sounds. The pesky Panthers and their running game, with a mix of onside kick attempts, made it an adventure, but the bottom line is Kilgore is 2-0 in District 9-4A, Division I with the win.

Van Zandt’s official numbers, courtesy of Kilgore coaches after watching film of the game: a career night, 16-of-20 for 270 yards and three touchdowns, two to Jermaine Roney and another to Dadrian Franklin, along with a late-game interception after the contest was well-decided.

Mabank trailed 32-6 at the half, and then added a score late in the third quarter, with about three minutes left, when Kaizen Burrows scored off a punt gone awry, getting the Panthers a touchdown closer (32-13).

Mabank tried its third onside kick of the game – got it – and then quarterback Beau Kilgore hit receiver Jaydon Reeder for a big gain inside Kilgore’s 20-yard-line.

The Panthers have a stable of runners that included the quarterback Kilgore himself, as well as Ty Reedy, Cody Chapman, Caleb Goforth, and Jayden Rogers.

When the fourth quarter began, Mabank was at Kilgore’s 2-yard-line. Goforth punched it in. Mackendon Brown missed the point after, though, and left the Panthers behind, 32-19.

Of course, another onside kick came, and this time Kilgore’s P.J. Wiley got his hands on it, fielded it cleanly and returned it to Mabank’s 33. Kilgore began to feed hammering running back Davin Rider for a pair of plays, running clock. Van Zandt took a shot into the end zone, but overshot the receiver just a bit, a rare misstep on this night.

Van Zandt didn’t miss on his next throw, a 35-yard touchdown pass to Roney, the second scoring connection between the two in the game, this one with 9:18 left in the game. Chris Baldazo’s kick made it 39-19 Kilgore.

Carson Manning had a fourth-quarter interception of Van Zandt, the only blemish on an otherwise good night for the junior quarterback.

Beau Kilgore scored on an 11-yard run with 3:59 left in the game, and after a failed onside kick – what seemed like the 26{sup}th{/sup} onside kick of the game – Kilgore took over at Mabank’s 41, and began, again, to run clock. Isaiah Ross scored on an 11-yard touchdown with 54 seconds left. Baldazo booted the extra point through, and that was the final dagger for the Panthers, who ran out of time – and luck.

The Panthers’ tricks began on the game’s very first play. Mabank opened with an onside kick and actually recovered it, by Jaden Turnbaugh, at midfield. The Mabank crowd erupted in cheers.

On the second play from scrimmage, with Mabank lined up in the slot T, quarterback Kilgore lost the handle on the football and it bounced right to Kilgore’s Omarion Smith, who raced 45 yards into the end zone for Kilgore’s first score of the game. Baldazo hit the extra point and gave KHS a 7-0 lead with less than a minute off the first-quarter clock.

The Panthers (5-2) were stopped on three downs by the Bulldogs’ defense, punted (a good one, 54 yards by Beau Kilgore), but it didn’t slow KHS whatsoever. On second and 9, Van Zandt handed the ball to Rider, who burst 81 yards through Mabank front, thanks to the Kilgore offensive line, and scored. Baldazo’s kick was blocked, but Mabank was offsides; this repeated a couple of times until Fuller elected to go for the two-point conversion and got it, Van Zandt up the middle. The Ragin’ Red led, 15-0.

The Panthers finally put the ball into the end zone on their next possession, with Beau Kilgore rolling to his left, a bootleg-like play, until he found Chapman. Kilgore defenders were on Chapman quickly, but he bobbed and weaved his way into the end zone on a 16-yard score. The two-point conversion failed, leaving Kilgore in front, 22-6.

Kilgore would score twice more: Van Zandt hit Franklin for 36 yards on a crossing pattern, then two plays later, found Roney for a 7-yard score, and then with 13 seconds left in the half, Baldazo added three more, a 28-yard field goal. KHS went into the locker room with the comfortable 32-6 lead.

Other KHS final numbers from the game: Davin Rider rushed for 118 yards and a touchdown on 10 carries; Ross finished with 37 yards and the score; and Matthew Hardy had 12 yards late in the game.

Corey Rider had a huge night: four catches for 120 yards. Roney had five catches for 35 yards and the two scores. Tyeskie had three for 47 yards; Franklin had two for 50 yards and the touchdown; and Davin Rider and P.J. Wiley each had a catch for 9 yards.

Baldazo finished 5-of-5 in extra point attempts and had the field goal.

The Bulldogs finished with 438 total yards.