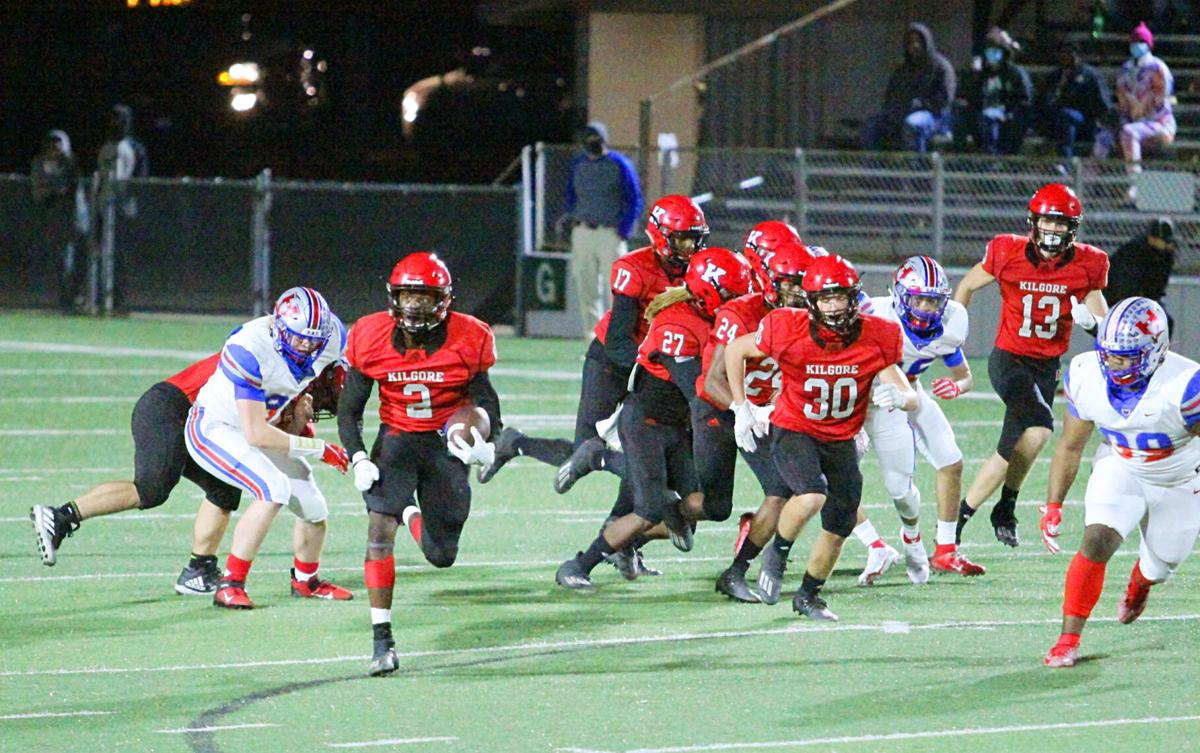 Kilgore’s Donovan Adkins (2) breaks free for a 47-yard kickoff return against Henderson Friday night here at R.E. St. John Memorial Stadium. Kilgore, which has largely dominated the series against Henderson since the mid-90s, rolled up another win in the series, beating the Lions, 35-9. Kilgore (6-2) has won four straight games, all four in District 9-4A, Division I. The ‘Dogs will visit Athens next Friday, Oct. 30. Below: Davin Rider and Brian Brown corner a Henderson player. (Photo by DENNIS JACOBS) 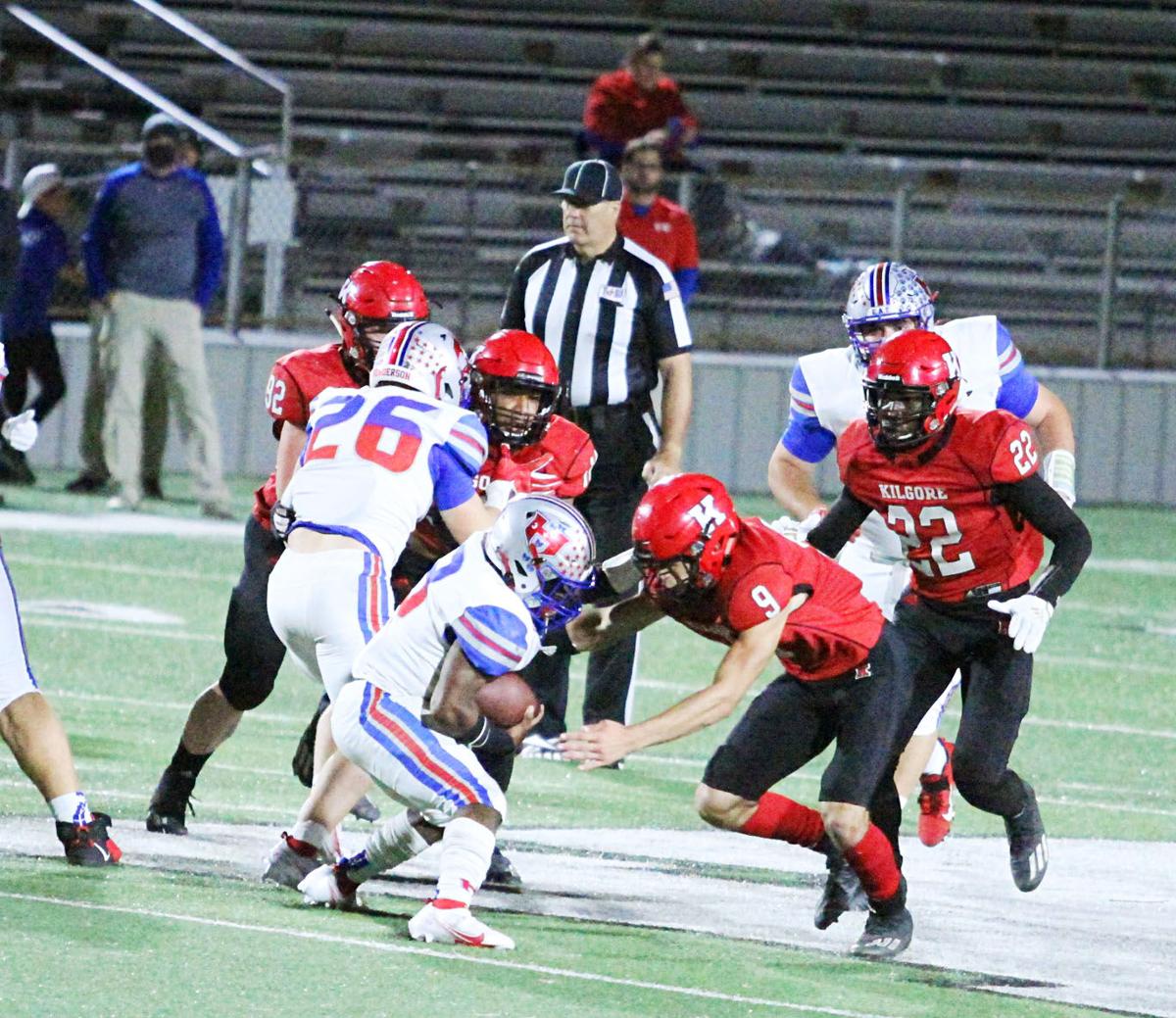 Kilgore’s Donovan Adkins (2) breaks free for a 47-yard kickoff return against Henderson Friday night here at R.E. St. John Memorial Stadium. Kilgore, which has largely dominated the series against Henderson since the mid-90s, rolled up another win in the series, beating the Lions, 35-9. Kilgore (6-2) has won four straight games, all four in District 9-4A, Division I. The ‘Dogs will visit Athens next Friday, Oct. 30. Below: Davin Rider and Brian Brown corner a Henderson player. (Photo by DENNIS JACOBS)

Kilgore High School running back Tray Epps got attention for his performance a week ago, earning a couple of versions of the top performance of the week throughout the entire state.

So the Bulldogs wanted to remind everyone Friday night, against Henderson here at R.E. St. John Memorial Stadium, that they’re a fairly-balanced offense – and Henderson got an up-close look.

Epps was good again Friday in a 35-9 win over the Lions, Kilgore’s fourth straight; he had 149 yards and a touchdown on 21 carries, matching his number.

But the Bulldogs also got three touchdown passes from Dalton McElyea, an impressive night all the way around in a game where it really didn’t appear the outcome was ever in doubt.

Kilgore (6-2) is now 4-0 in District 9-4A, Division I, and the Ragin’ Red visits Athens next week. That’s the next-to-last game of the regular season.

Kilgore appears to be on a collision course with Lindale – the Eagles had the night off Friday night, and are also 4-0 in district play. Kilgore hosts Lindale on Nov. 6, in the regular season finale.

After a couple of possessions ended negatively – one on a fumble and the other on a sack, that forced a punt – Kilgore finally got on the scoreboard with a 13-yard run by Epps, with 3:40 left in the first quarter. It was set up by Epps from his own 43-yard-line, on a 42-yard run. He scored two plays later, and Chris Baldazo’s extra point gave the Bulldogs the 7-0 edge.

The Bulldogs added to it on their next drive. Kilgore, buried in a second and 17 to go at the Lions’ 44. Quarterback Dalton McElyea faked a hand-off to Epps and almost everybody bit on the fake, long enough for McElyea to get the needed yardage for the first down and then some, a 27-yard run.

Kilgore scored two plays later on a 13-yard pass from McElyea to Donovan Adkins, for a 14-0 KHS lead.

Henderson running back D’Cameron Walker muddled his way through for a 65-yard gain on Henderson’s next series, all the way down to the Kilgore 10-yard-line, but Kilgore’s defense stiffened and forced a 23-yard field goal by Jim Jose. The Lions trailed 14-3, with 4 ½ minutes left in the half.

Adkins sparked Kilgore for another first-half score. He returned the ensuing kickoff 47 yards, and then two plays later, McElyea hit Jermaine Roney for a 29-yard touchdown. Baldazo was good on the point after again for a 21-3 lead.

Henderson added a touchdown before the half, a 25-yard pass from Donovan Davis to Devin Phillips, but Adkins blocked the Lions’ extra point attempt, leaving the score 21-9 Kilgore, which was the eventual halftime score.

Kilgore’s defense scored the only touchdown of the third quarter for either team, when Davin Rider stepped in front of a Henderson pass and took it the distance, a pick-six, an interception return for a touchdown for 50 yards. Baldazo hit his fourth extra point of the night for a 28-9 lead.

The final touchdown of the night was Kilgore linebacker Eli Caruthers stepping over to the other side of the ball to catch a 12-yard touchdown pass from McElyea.

McElyea was an efficient 8-of-10 for 108 yards and three scores. Adkins had three of those, for 37 yards and the 13-yard touchdown. Roney had two for 31 yards, and the score. Caruthers had the touchdown catch. And Matthew Tyeskie, Cade Pippen and Dadrian Franklin each had a catch; Tyeskie for 21 yards, and Pippen and Franklin for 7 yards each.

Baldazo finished 5-of-5 in extra points.

Defensively for Kilgore, Brian Brown had 14 tackles, nine of them solo, a sack, and a tackle for loss. Rider had the pick-six, and also 11 tackles, two for loss. Caruthers had 11 tackles, seven solo, one for loss. Alex Chavez had six tackles. Marcaelin Caraway had four tackles. Adkins, Brantley Propes and Kaden Kenney each had three. Corey Rider, Jordan Owens and Peyton Christian each had two tackles and Owens had a sack.