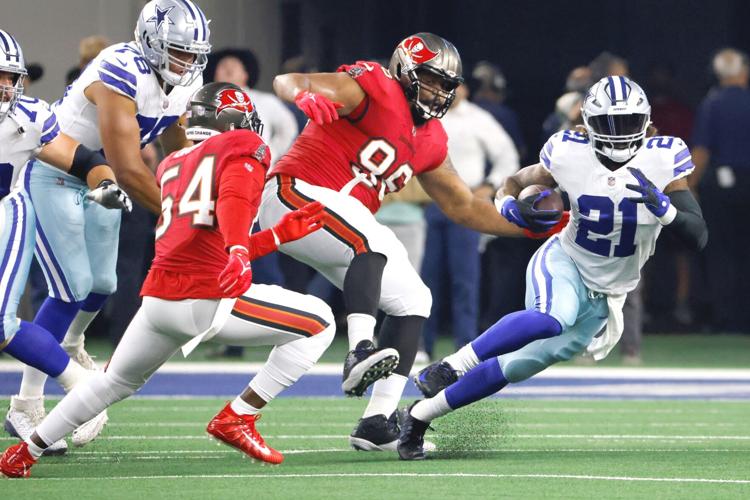 Tampa Bay Buccaneers’ Lavonte David and Akiem Hicks defend as Dallas Cowboys running back Ezekiel Elliott (21) runs the ball. Elliott and the Cowboys lost that season opener, but host quarterback Joe Burrow and the Cincinnati Bengals on Sunday at 3:25 p.m., on CBS. 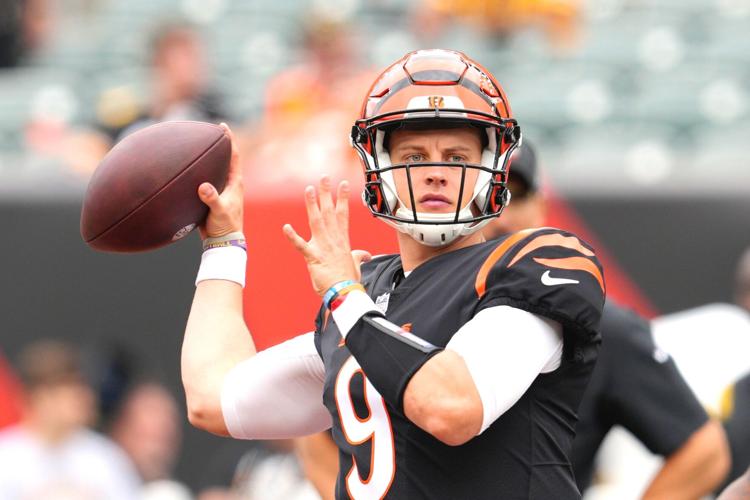 Tampa Bay Buccaneers’ Lavonte David and Akiem Hicks defend as Dallas Cowboys running back Ezekiel Elliott (21) runs the ball. Elliott and the Cowboys lost that season opener, but host quarterback Joe Burrow and the Cincinnati Bengals on Sunday at 3:25 p.m., on CBS.

Cooper Rush wouldn’t mind a replay of his — the only start of his career in place of an injured Dak Prescott last season, when he threw a touchdown pass in the final minute to lift the Dallas Cowboys over the Minnesota Vikings.

Both quarterbacks have the same job Sunday: Get teams with playoff aspirations back on track after season-opening losses, the Bengals to AFC North rival Pittsburgh in overtime and the Cowboys to Tampa Bay for the second year in a row.

“The important thing is you put it behind you,” Bengals coach Zac Taylor said. “You don’t always play perfect. You shake it off. You try to clean up any of the mistakes you made, but also emphasize a lot of the positives that happened.”

Burrow threw four interceptions and lost a fumble, but still had the Bengals (0-1) in position to win with a PAT in the final seconds of regulation. Evan McPherson’s kick was blocked, and he missed another potential winning field goal in OT in the 23-20 loss.

There weren’t nearly as many positives for Dallas.

Rush played the last half of the fourth quarter after the fracture in the area of Prescott’s right thumb. Even with their star QB, the Cowboys never got closer than the Tampa Bay 31 in a 19-3 loss. The NFL’s highest-scoring offense from last season was the only one in the league without a touchdown in Week 1.

Reigning Defensive Rookie of the Year Micah Parsons remembered this time last year, when the Cowboys were coming off a loss to the Bucs before defensive end DeMarcus Lawrence broke a foot in practice going into a Week 2 victory on the road against Justin Herbert and the Los Angeles Chargers.

“We’ve been in these shoes last year. Almost identical,” Parsons said. “It might not have been Dak, but it was D-Law and everyone was crushed. Of course we had people that stepped up. People are going to have to step up again.”

Rush threw a 5-yard touchdown to Amari Cooper in the final minute of a 20-16 victory at Minnesota in Week 8 last season, when Prescott was sidelined by a strained calf.

The Cowboys knew Prescott would be back after that game. And while there is optimism that Prescott could return sooner than six weeks with his latest injury, there’s little question Rush will start multiple games instead of just one.

“Coop has been here a long time,” right guard Zack Martin said of the sixth-year pro. “He knows exactly what’s going on. But there is always kinda like that, ‘I wonder how he’ll do in a game.’ I think he showed that last year.”

Burrow said “everybody” keeps asking what he thinks about playing at AT&T Stadium for the first time. His answer is always the same: It won’t be the first time.

His LSU debut was a 33-17 victory over Miami at the home of the Cowboys in the 2018 opener, a year before he led the Tigers to the national championship.

The 2019 Heisman Trophy winner says he doesn’t know why most folks don’t remember the previous visit — or why they’re so caught up in him going to the retractable roof stadium with the huge video board hanging over the field.

“I feel like it’s kind of an iconic stadium in our league,” Burrow said. “Obviously the big scoreboard, and the Cowboys have a lot of rich tradition. Whenever you go there, I think it kind of feels a little different.”

Rush won’t have Cooper as a receiving option in this start after the Cowboys traded him in a cost-cutting move, clearing the way for CeeDee Lamb to take over as the No. 1 receiver. Lamb’s first game in that role wasn’t a good one. He had two catches on 11 targets. Of the other 17 receivers with at least 10 targets in the opener, none had fewer than five grabs.

“Everybody has their own opinion,” Lamb said. “You’re entitled to it and obviously after Week 1, everyone’s going to have something to say. I mean, it is Week 1. You’ve got to understand we’ve got 16 more.”

Awuzie left on his own terms, choosing the Bengals in free agency in 2021 after four years as a second-round pick for the Cowboys. Collins was released in a cost-cutting move this past offseason and signed with Cincinnati.

Reserve tight end Mitchell Wilcox was forced into long-snapping duty against the Steelers when Clark Harris injured a biceps. Wilcox’s snap was high on the 29-yard potential winner in OT and might have affected the timing for the normally reliable McPherson, who set a team record with a 59-yarder before Harris got hurt.

Cal Adomitis is coming off the practice squad to take over for Harris, the team’s long snapper since 2009.