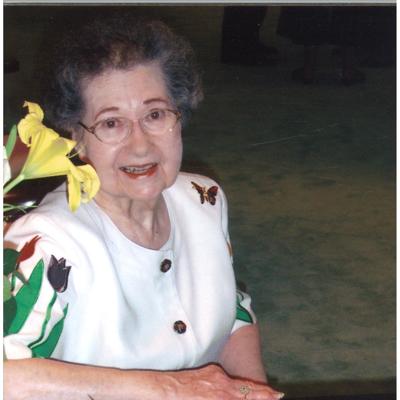 Willye Mae (Billie) Oliphint born June 15, 1922, in La Grange, TX, passed away peacefully at Arabella of Kilgore Assisted Living facility on Sunday, May 19, 2019. Memorial services will be held at St. Luke's United Methodist Church in Kilgore TX on Saturday, May 25, 2019 at 1 pm. She is survived by husband of 71 years, Guy Oliphint of Kilgore, daughter Bonnie of Tyler, TX, son and daughter-in-law Bob and Connie Oliphint of Houston, and son and daughter-in-law Mark and Kerry Oliphint of Kilgore, TX, grandchildren Guy Oliphint, Katy Pleasant, Brit Oliphint, Paul Oliphint, Ben Oliphint and great grandchildren Clara, Lily, Andrew, Sadie, Luke, and Noah. They were all the light of her life and they loved her dearly.

Born into a musical family, she played piano in the family band and drums in La Grange High School band. She could play piano by ear and always led the family in Christmas Carols.

On January 16, 1948 she married Guy Oliphint in Houston and they built a good life together there. Billie had a successful career in business at Petro Tex Chemical Corp and Denka Chemical in Houston for over 40 years.

They resided in Houston until retirement and then moved to New London, and then to Kilgore. After moving to East Texas, Billie became very involved in local garden clubs and served a District Director of Texas Garden Clubs.

She was known for her delicious cooking, expert flower arranging and gardening, and oil painting, but her greatest gifts were to her family. She was always working to make her children and grandchildren's lives better. She was generous and kind and a tireless worker, working late into the night making clothes for her children and costumes for grandchildren. She was the spark that livened every day of our lives. Her energy and love of family and friends remained until the end, and she and Dad were a true team in love and life!

The family would like to express our profound gratitude to the kind, compassionate and loving staffs of Arabella of Kilgore, Elite Private Care, and Heart to Heart Hospice for their devoted care to Mom.