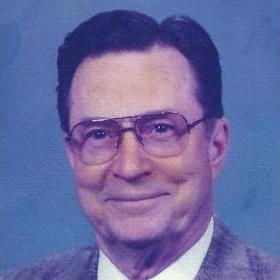 Graveside services with military honors for Joseph Monroe Pearson, 91, of Lufkin will be held Thursday, June 27, 2019 at 11:00 a.m. in the Bazette/Prairie Point Cemetery in Kerens, Texas.

Mr. Pearson was born September 12, 1927 in Corsicana, Texas to the late Calesta (Burson) and Albert Monroe Pearson, and died Monday, June 24, 2019 in Lufkin.

Mr. Pearson served in the U.S. Army Air Corps during World War II. He also served in the U.S. Army as well as the U.S. Marine Corps. He earned a Bachelors degree from North Texas State College and was employed by FDIC before beginning his career in banking. He served as President for banks in Crockett, Gonzales, and Kilgore, and owned banks in Wells and Chester. Mr. Pearson was a member of the Danville Masonic Lodge #101 A.F. & A.M. in Kilgore, the Rotary Club, and was a member of First Christian Church Lufkin.

He was preceded in death by his parents; sisters, Jane Miller and Sarah Adams; and brother, Oliver Pearson.

The family will welcome friends and loved ones from 5:00 to 7:00 p.m. Wednesday evening at Carroway Funeral Home.

Memories and condolences may be added at www.carrowayfuneralhome.com.