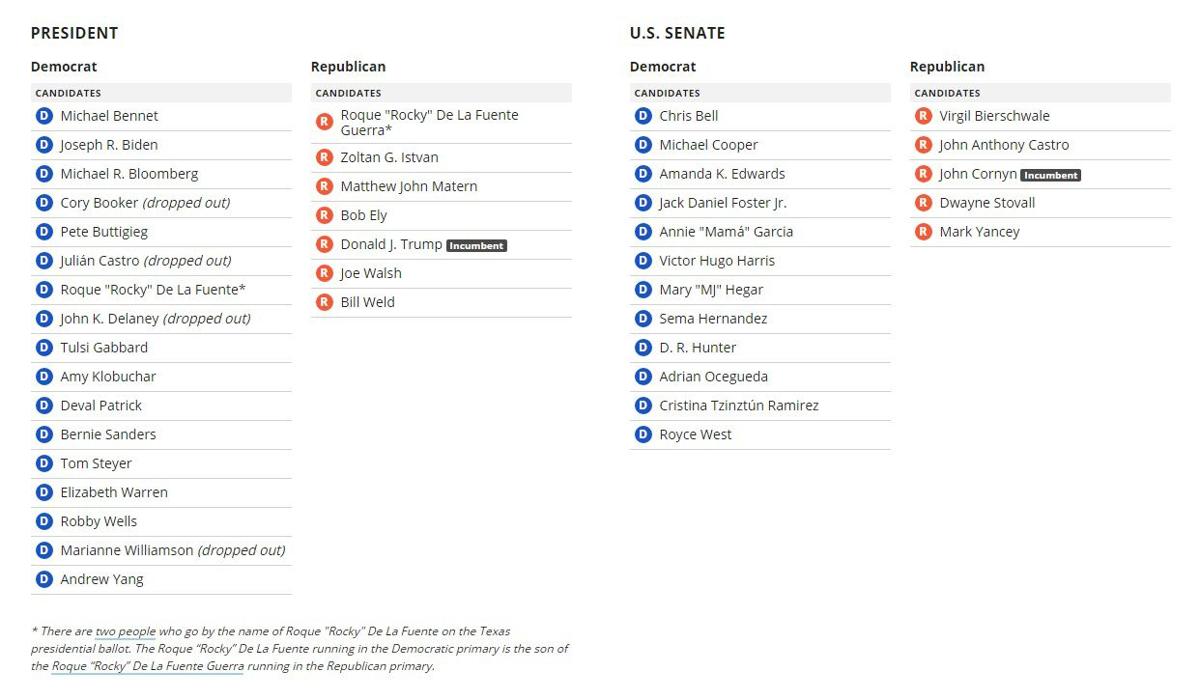 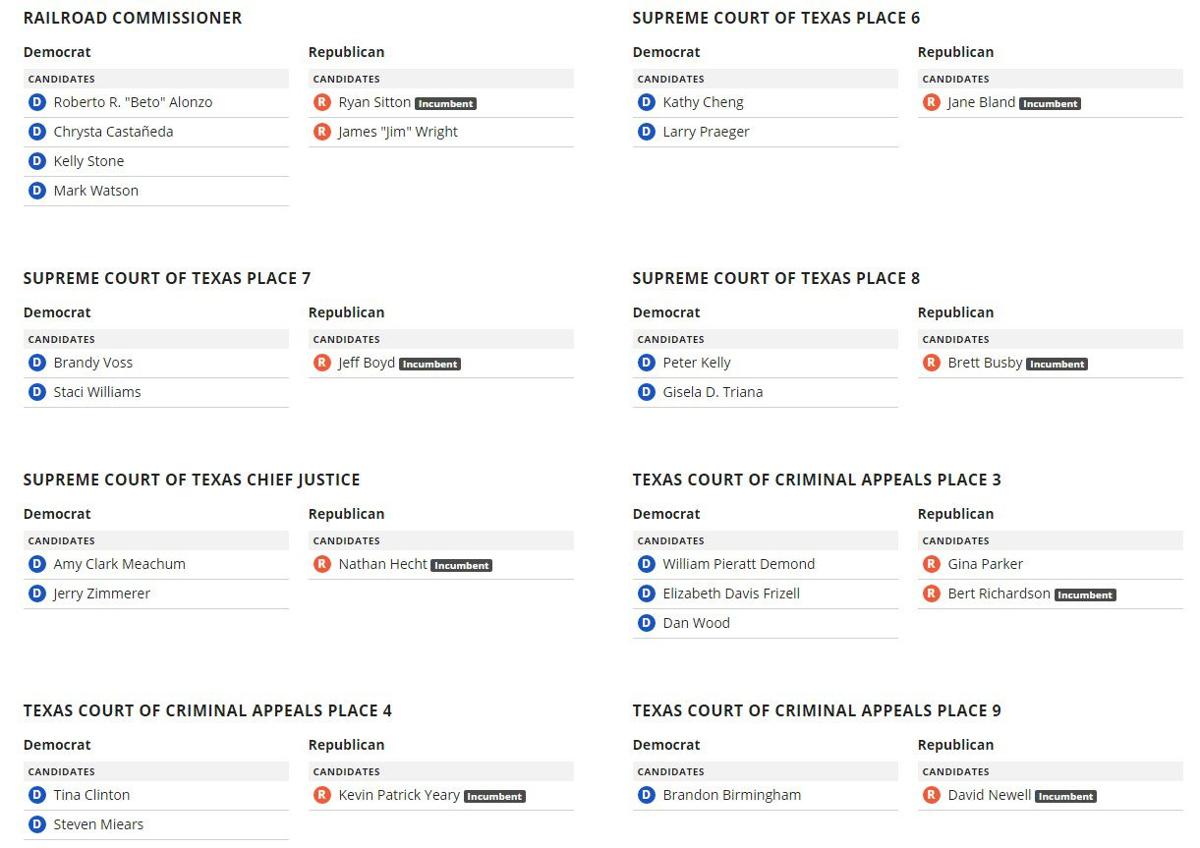 Texas voters will head to the polls March 3 to select their major party candidates for several statewide races and legislative seats. We’ve compiled an overview of everything Texans need to know about casting a ballot in the 2020 primaries.

Whom do I get to vote for?

All Texans’ ballots will include the statewide races, but the rest of the races on there will be determined by where you live. On the federal level, Texans are divided among 36 congressional districts. On the state level, Texans are divided into 150 House districts, 31 Senate districts and 15 State Board of Education districts. Your address determines your district — and who represents you. All congressional and Texas House districts are up for election this year, along with one U.S. Senate seat, several Texas Senate seats and eight State Board of Education seats.

Each of Texas’ 254 counties administers its own elections on races that range from county commissioner seats to district attorneys, so we don’t have a list of every local race on the ballot. However, information about what’s on the ballot in specific counties can be found on the list of county websites maintained by the Texas secretary of state’s office.

Voters typically can also find local ballot information or candidate listings on the websites for the nonpartisan League of Women Voters or their local newspapers or TV stations.

The primary election ballots in Texas consist of races for 10 statewide positions, including the race to determine who will represent the state in the U.S. Senate alongside Ted Cruz. The remaining races are for railroad commissioner and eight seats on the state’s two highest courts — the Supreme Court and the Court of Criminal Appeals.

Is there a way to confirm whether I’m registered to vote?

The Texas secretary of state’s website will tell you whether you’re registered if you log in using one of these three ways:

— Providing your Texas driver’s license number and date of birth

— Providing your date of birth and Voter Unique Identifier, which appears on your voter registration certificate

The last day to apply for a ballot by mail is Feb. 21.

How do I know if I’m eligible to vote by mail?

You are only allowed to vote by mail for one of the following four reasons:

— You will not be in your county March 3 (election day) or the entire span of early voting.

— You are sick or disabled.

— You will be 65 years old or older by election day.

— You are confined in jail but otherwise eligible (i.e., not convicted of a felony).

The early voting clerk in your county must receive your application to vote by mail by Feb. 21. Eligible voters will either need to make sure the ballot is postmarked by election day or received by an early voting clerk by 5 p.m. March 4.

Where am I allowed to vote early?

Voters can cast ballots at any polling location in the county where they are registered to vote. Early voting locations can be found on the Texas secretary of state’s website two days before early voting begins.

Who is eligible to vote early?

Anyone who is registered to vote may vote early, but it must be done in person unless you qualify to vote by mail.

Are polling locations the same on election day as they are during early voting?

Not always. It’s recommended to check the open polling locations in your area before you head to cast your ballot. With some exceptions, election day voting may be restricted to locations in your designated precinct.

How can I find which polling places are near me?

The secretary of state’s website has information on polling location options on election day and during the early voting period.

What form of ID do I need to bring?

You’ll need one of seven types of valid photo ID to vote in Texas:

— A Texas license to carry a handgun (issued by DPS)

— A U.S. military ID card with a personal photo

— A U.S. citizenship certificate with a personal photo

What if I don’t have a valid photo ID?

Voters can still cast votes if they sign a form swearing that they have a “reasonable impediment” from obtaining a proper photo ID. However, those voters will also have to present one of the following types of identification:

Can I wear campaign materials to the polls?

No. It’s a class C misdemeanor to wear campaign gear at polling locations, which constitutes electioneering in Texas (and most other states). According to Texas law, a person “may not electioneer for or against any candidate, measure, political party” within 100 feet of the voting site during early voting or on election day.

If you do decide to wear any partisan gear to the polls, you may be asked to turn your shirt inside out or put on a jacket. If you can’t — or won’t — cover up, you’ll be asked to come back and vote later. Learn more here.

Historical election results and the shapes of the U.S. House, State Board of Education, Texas Senate and Texas House districts were provided by the Texas Legislative Council.

Demographic data for congressional, Texas Senate and Texas House districts is from the latest available Citizen Voting Age Population data based on 2013-2017 American Community Survey five-year estimates produced by the U.S. Census Bureau. Demographic data for State Board of Education districts is from the Texas Legislative Council’s demographic analysis, based on the census 2013-2017 ACS five-year estimates.

Candidate information was sourced from the Texas secretary of state and through Texas Tribune research.

Information regarding the voting process was collected from the Texas secretary of state and sourced from Tribune reporting.

Disclosure: Vikki Goodwin and the Texas Secretary of State have been financial supporters of The Texas Tribune, a nonprofit, nonpartisan news organization that is funded in part by donations from members, foundations and corporate sponsors. Financial supporters play no role in the Tribune’s journalism.