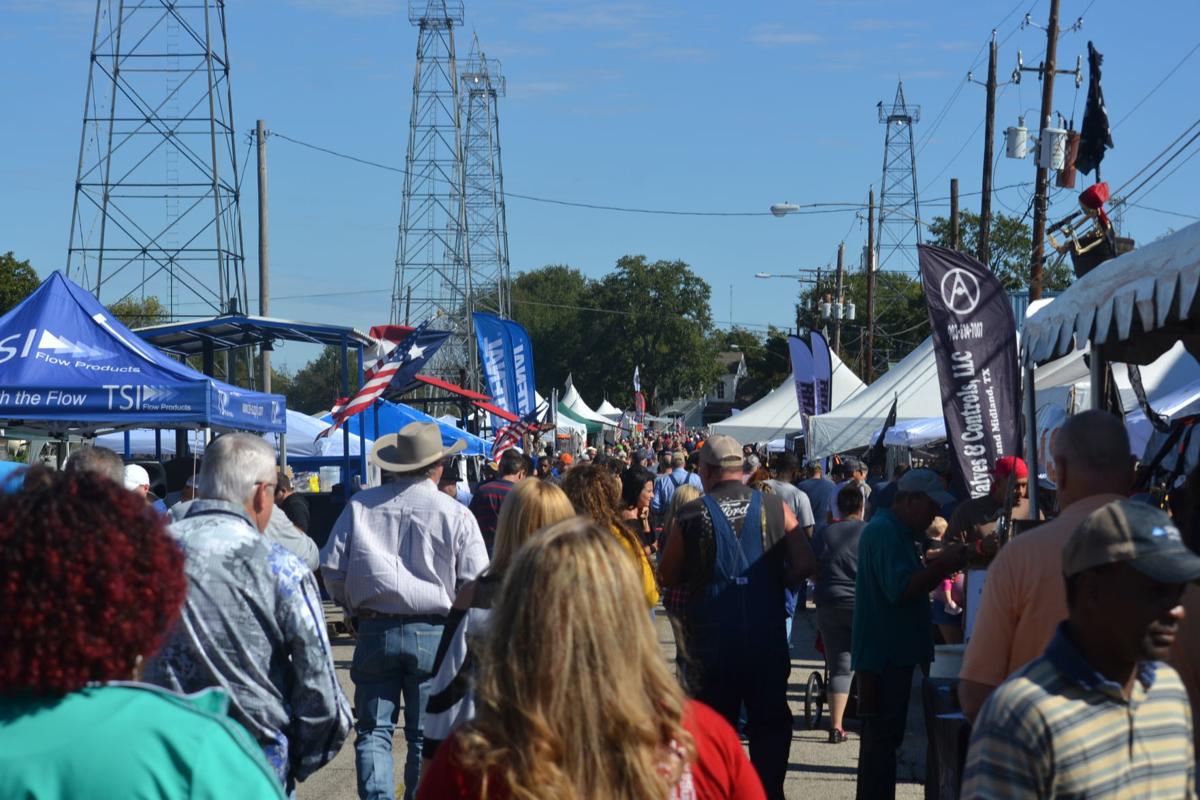 For the first time in almost 30 years, there won’t be an East Texas Oilmen’s Chili Cook-Off in downtown Kilgore this fall. Organizers decided last week not to try and have the event, which packs up to 10,000 people onto Commerce Street, due to the uncertainty of the COVID-19 situation. 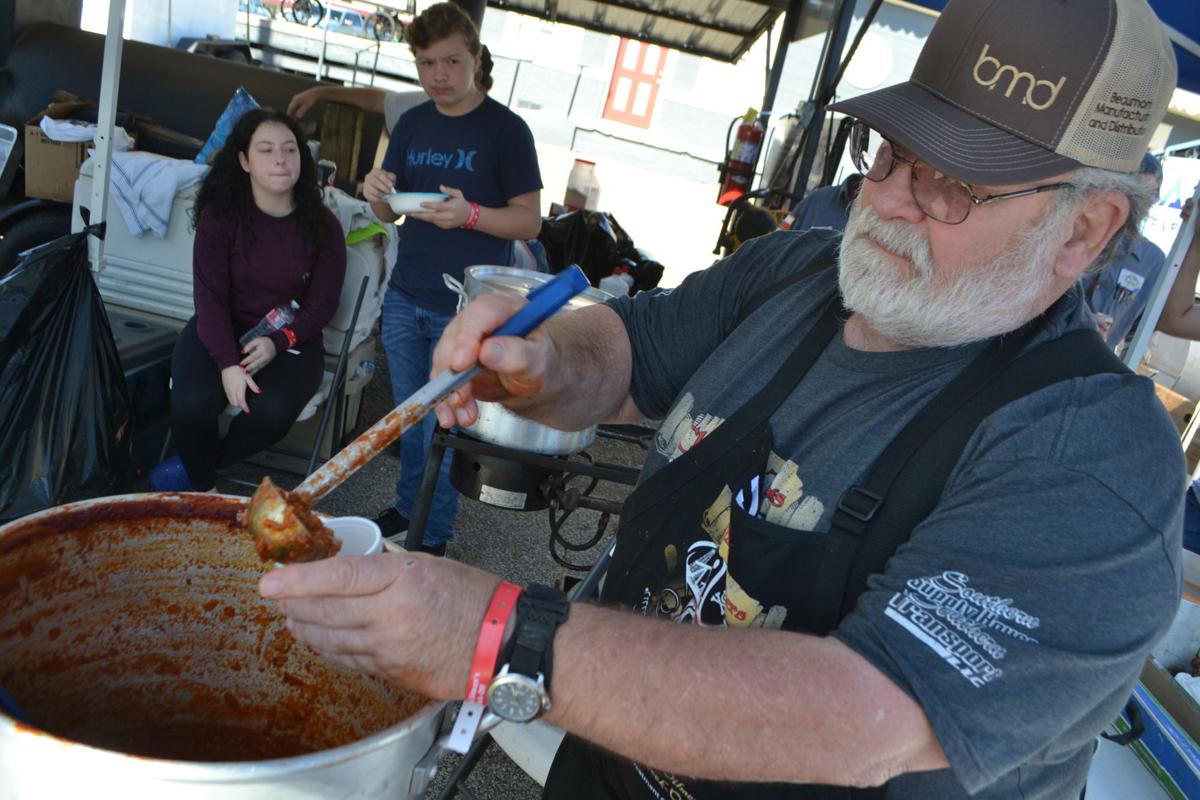 A cook pours up a small portion of chili from last year’s East Texas Oilmen’s Chili Cook-off. But chili lovers will have to fix their own this fall; cautionary measures for the COVID-19 virus are being taken, and the chili cook-off won’t be held.

For the first time in almost 30 years, there won’t be an East Texas Oilmen’s Chili Cook-Off in downtown Kilgore this fall. Organizers decided last week not to try and have the event, which packs up to 10,000 people onto Commerce Street, due to the uncertainty of the COVID-19 situation.

A cook pours up a small portion of chili from last year’s East Texas Oilmen’s Chili Cook-off. But chili lovers will have to fix their own this fall; cautionary measures for the COVID-19 virus are being taken, and the chili cook-off won’t be held.

Scott Clark has been to every single East Texas Oilmen’s Chili Cook-off that’s ever been held.

“I remember when the night-before deal got started,” Clark recalled. “We’ve got the pit down here, threw a couple of steaks on for just five or six of us. Next thing I know, we’re cooking for a lot of people. It snowballed after that. I think there were times we ended up cooking 15 briskets and 24 slabs of ribs. That was 25 years ago, I believe.”

But he won’t be at one this year.

The annual cook-off, which usually takes place in downtown Kilgore on Commerce Street in late October-early November and brings somewhere around 10,000 people for the fun, was cancelled for this fall, for the first time in its 28-year history, thanks to the COVID-19 virus.

The decision to cancel the cook-off was a difficult one, one not taken lightly, but cook-off chair Nicole Oubre believes it was the right one. The cook-off board voted on it last week.

“It wasn’t easy, but I feel like our country is facing something that we’ve never faced before, and how do you prepare for something months in advance when you don’t know what months in advance brings?,” Oubre said. “When they closed everything down back in March, I’m sure we all thought by July we’d be back to normal, and here we are not back to normal. Here we are now all being required to wear face masks any time we’re in public, so I just think right now you can’t really foresee what the rest of 2020 has for us.”

Oubre said that social distancing would be impossible at the cook-off.

“It’s a 10,000 person event, and right now the state isn’t even allowing 10 or more to get together, so things may get better, I’m praying, between now and October, but it’s very hard for us to plan and take people’s money, take company’s money, get prepared if it may not even happen,” she said. “So, it was a very very, very difficult decision to make, but we don’t even know if the state would allow us to have it come October, let alone what stipulations we’d have to abide by to have that event. We’d rather play safe than sorry.”

With literally hundreds of gallons of chili prepared between what was in some years over a hundred booths, vying for the win, and then all those thousands of people downtown, it’s a big deal. But to get there, a lot goes into planning the cook-off.

“We normally have our first meeting probably about March, and then as it gets closer, we meet more often and more often,” Oubre said.” March, April, May, once a month, and then normally by about July we’re meeting every two weeks. There’s a lot that goes on behind the scenes securing our vendors, making sure that we have things ordered that we’re going to need to carry on the event, and typically by the first of July, the packets go out to the participating, and then they start registering, and things are typically, we’re pretty much sold out, last year we were sold out by the first or second week of September.”

Oubre said that they’re all very disappointed, but it’s beyond her control.

“It’s beyond anyone’s control at this point in time,” she said. “I do feel safer knowing that we’re not gonna plan and get everyone’s hopes up for the next two to three months and then have to cancel at the last minute. I think that would have been devastating.

“There’s certain things as a chili cook-off that we have to prepare for and put money up for before the event actually happens. Like any big event, you have to secure your vendors. A lot of those vendors you don’t get your money back on, and I couldn’t with good faith take these companies’ money, these participating companies’ money and secure our vendors if at the last second we weren’t allowed to have it.”

With the oilfield hurting, Oubre said they didn’t want to take money from the companies that usually participate in the cook-off.

“Kilgore is an oilfield-based town, and right now the oilfield is not doing good,” she said. “So although the oilfield companies that have participated have always been very generous, at this point in time I would rather them put that money back into their own companies. People are getting laid off left and right. Hours are getting cut, businesses and doors are being closed, and I’d rather a company invest that back into themselves than donate right now. If companies can donate, that’s great, but I just don’t feel comfortable asking for that right now.

“…In addition to us, these companies that participate, a lot of them reserve things and start planning and purchasing things before the event in addition to paying their entry fee, and I just think right now it’d be irresponsible for us to even give people the possibility that it could happen. It’s just safer for us to say no and keep everybody safe in the long run.”

Clark, of Energy Weldfab, has had not only fun but great success in the cook-off, said even though it was a let-down, he understood, and that most people will probably feel the same way.

“I’m disappointed,” he said. “I think a lot of people will be. I understand it, but I sure hate to hear it.”