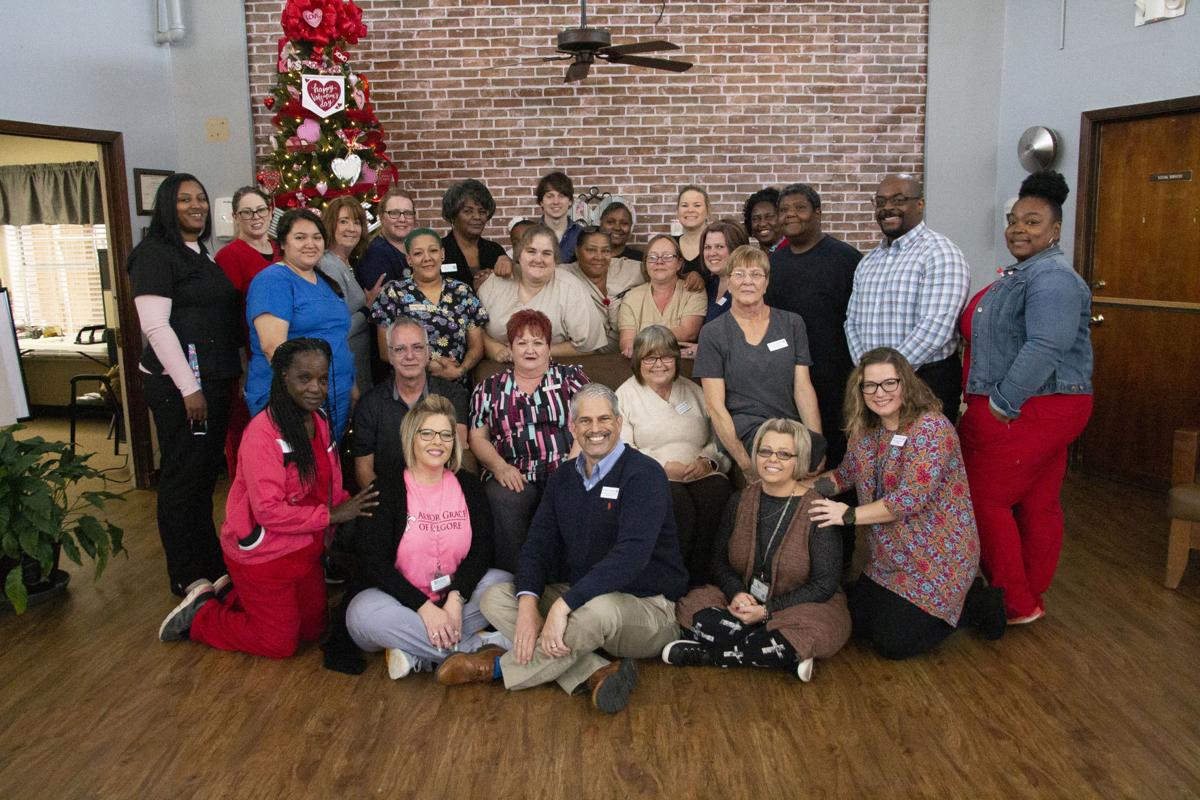 Jim Kale (seated, front center) became administrator of Arbor Grace of Kilgore in October 2019 and has quickly come to enjoy working with the facility staff. “The staff is strong. Every department is strong. They’re just awesome. We excel in our patient care,” he said. Kale assumed the role in the midst of a major expansion and renovation project at the facility, which should be completed in the near future. 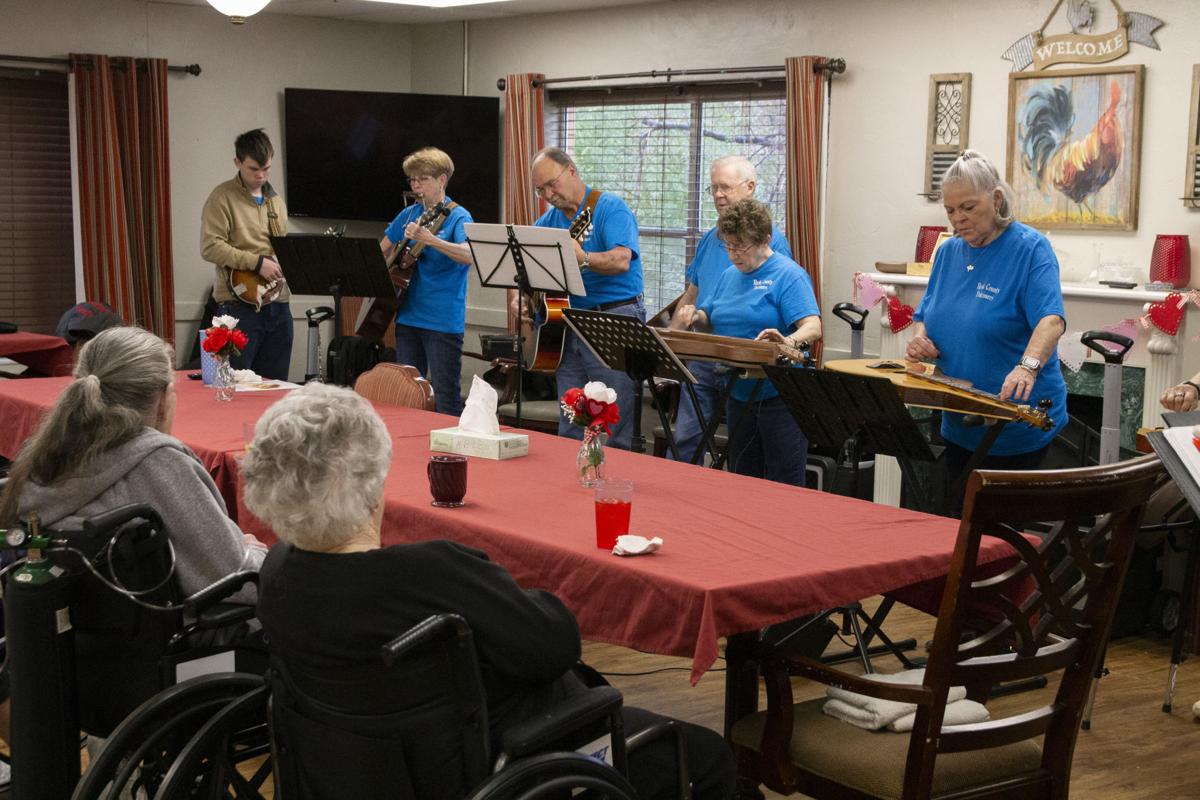 Arbor Grace of Kilgore provides a variety of activities for its residents. On Thursday, a dulcimer band performed traditional tunes as residents enjoyed the performance.

Jim Kale (seated, front center) became administrator of Arbor Grace of Kilgore in October 2019 and has quickly come to enjoy working with the facility staff. “The staff is strong. Every department is strong. They’re just awesome. We excel in our patient care,” he said. Kale assumed the role in the midst of a major expansion and renovation project at the facility, which should be completed in the near future.

Arbor Grace of Kilgore provides a variety of activities for its residents. On Thursday, a dulcimer band performed traditional tunes as residents enjoyed the performance.

Arbor Grace of Kilgore is growing and new administrator Jim Kale is working hand-in-hand with staff to bring the skilled nursing facility into a new stage of community service.

Kale joined the Arbor Grace team in October 2019, bringing years of experience along with him.

“I’ve always wanted to be an administrator,” Kale said.

The hiring process was serendipitous, Kale added, and he has found the new job both welcoming and enjoyable.

“About a year ago, I felt the need to just do it and then I applied and it just worked out. I took the test, passed and I wasn’t really looking; however, I sent my resume to this company and had an interview and was hired. It was like it was meant to be.”

Kale previously worked at another nursing facility in Henderson and has found the work environment at Arbor Grace welcoming.

“It has been an awesome experience. I have a great team here. It just seems like we’ve been together forever. It’s a great fit.”

Arriving in the midst of a major renovation and expansion project was daunting, Kale allowed, but he soon found enjoyment as he took part in the process. He was “scared to death” at first due to the huge scale of the project, which will add 20,000 square-feet to the facility’s existing 26,000. Additions will include a new cafeteria, 30 private Medicare rooms, a 36,000 square-foot parking lot, a landscaping upgrade and major remodel to the existing facility in addition to a state of the art therapy gym.

Once he settled into the new role, Kale soon found being part of the Arbor Grace team brought plenty of excitement.

“Anybody that is a new administrator, it’s like a dream come true to be a part of something that’s new. We’re almost doubling our size.”

Kale emphasized coordination between himself and Arbor Grace staff as critical to the success of the facility as a whole.

“The staff is strong. Every department is strong. They’re just awesome. We excel in our patient care,” he said.

Arbor Grace recently passed their annual state inspection, another milestone for Kale after assuming the role of facility administrator.

“We recently had our state survey and had minimal tags. Every facility gets tags for something, it’s always something. However, we got minimal tags. We didn’t know they were coming. They came two months early from the previous year. We came in from the holidays and they walked in right behind us. You run like ants. You’re trying to get things done and get things ready and it was a very successful week.”

Kale has also joined local groups, taking part in events with the Kilgore and Henderson Chambers of Commerce in both Gregg and Rusk Counties. He looks forward to remaining an important part of the community.

“We’re building this. We’re so thankful that our corporate has chosen to expand here in Kilgore. This is going to be an awesome asset to the community.”

Kale said the primary challenge he has faced at Arbor Grace so far has been issues with the age of the existing building. Older buildings come with their own issues, he said, but the older parts of the facility will be renovated, one wing at a time to minimize patient disturbances, when the addition project is complete.

The most rewarding aspect of the job so far has been the involvement of the community, he said. Arbor Grace has stepped up its marketing efforts throughout the addition project to let the community know they are still open for business as usual. The facility is currently near its patient capacity, but with the completion of the expansion, that capacity will increase considerably.

While the project is underway, Kale and the Arbor Grace team have been relying on one another to generate ideas to improve the experience of residents at the facility. Employees are recognized with drawings to win cash prizes and having their names placed on a “shout-out board” for their ideas.

“We implement a lot of their ideas. It’s just a great place to work and it’s not because of me. It’s because of the team.”

Kale said there is not yet a firm date for the completion of the expansion, owing to “typical hiccups” during construction including weather delays, but will announce a date for a ribbon-cutting ceremony and facility tours as the time draws near.

His goal as administrator of Arbor Grace is clear.

“My goal here is to be recognized as the leading facility in East Texas with giving exceptional patient care and to meet the needs of our residents. I just want the community to know that we’re here, we’re ready to serve and that we are excited about what we have to offer to the community.”