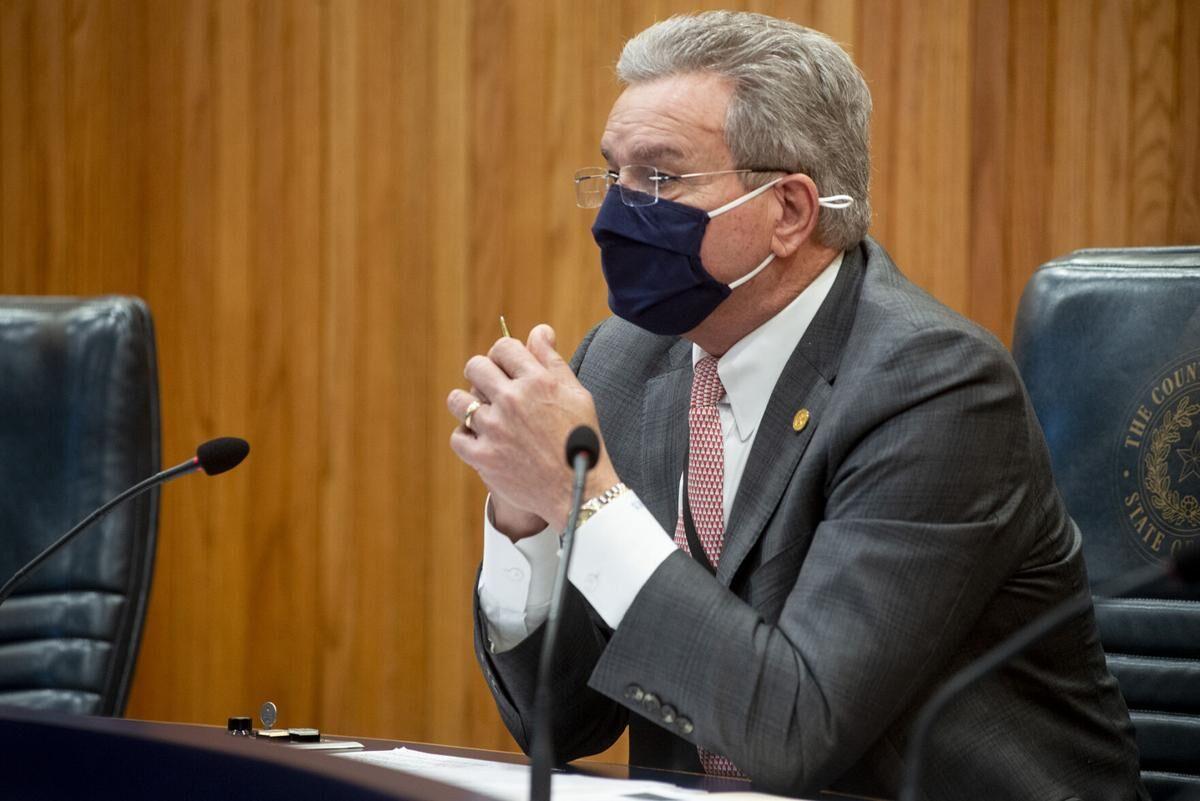 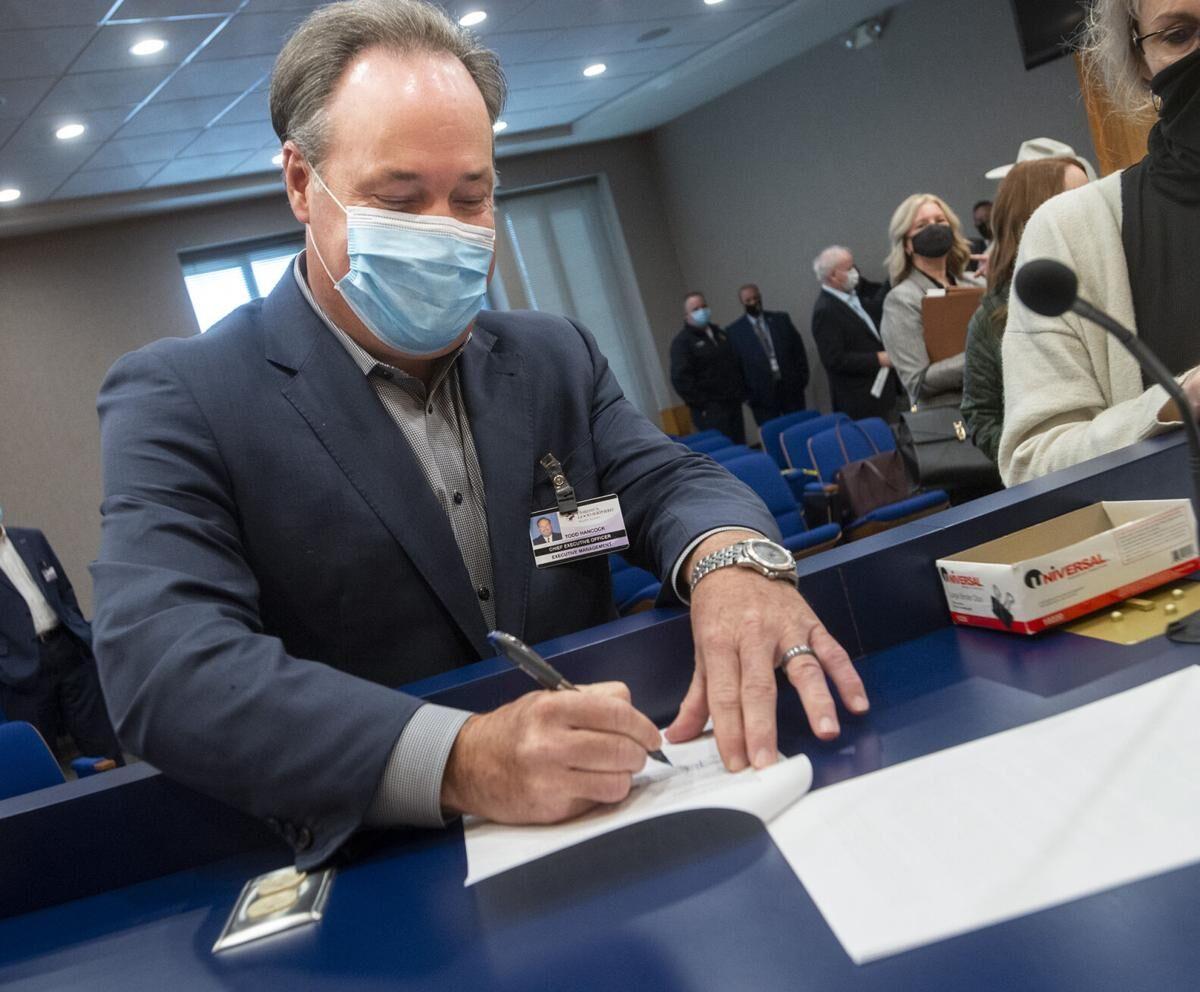 CHRISTUS Health Systems CEO Todd Hancock signs the contract Thursday during a Gregg County Commissioners Court meeting to form a partnership with the county to become a COVID-19 vaccine hub.

CHRISTUS Health Systems CEO Todd Hancock signs the contract Thursday during a Gregg County Commissioners Court meeting to form a partnership with the county to become a COVID-19 vaccine hub.

Gregg County commissioners voted Thursday to help fund a sustainable COVID-19 vaccine program for the region, paving the way for vaccinations to begin today in Longview.

Thursday’s meeting started with tones of sadness and urgency to bring more vaccines to the county as commissioners in their opening prayer remembered two Gregg County employees, Jay Crawford and Chris Timmons, who each died of COVID-19.

By the end of the meeting, tensions had risen as Pct. 2 Commissioner Darryl Primo cast opposing vote after opposing vote to measures related to bringing the vaccine hub to the county, culminating with a heated discussion between Primo and County Judge Bill Stoudt.

“I’m extremely excited that we will be able to start vaccinations Saturday. There’s been so much work that has gone into this,” Stoudt said. “This wasn’t about politics. This was about helping people.”

Primo voted against a series of measures related to the vaccine hub. One such measure was a contract with CHRISTUS Health System in which the county agreed to pay CHRISTUS $250,000 immediately and up to $250,000 again later for expenses related to administering the vaccinations. The contract states that costs include personal protective equipment, staffing and administration, registration, data entry, vaccine storage and other necessary costs.

The county is pulling funds from its $60 million reserves to pay CHRISTUS; however, County Auditor Laurie Woloszyn noted the county’s expenses will likely be reimbursed by the Federal Emergency Management Agency as FEMA is continuing to award more reimbursements for virus-related expenses.

On Thursday, FEMA announced an additional $2.5 billion is coming to Texas for pandemic expenses.

Primo said he supports vaccinations coming to the county, but he said he is opposed to the contract with CHRISTUS.

The commissioners noted that Longview Regional Medical Center was not asked to participate in a vaccine hub for Gregg County, and Primo said he would like to see both medical facilities be included in administering vaccines to further reach more county residents. Primo further questioned the expenses for which CHRISTUS is being reimbursed when the hospital also is asking for residents to submit insurance information when registering for a vaccination. The contract with the county gives CHRISTUS the authority, should it choose, to also bill insurance companies for reimbursable expenses.

“The vote was on the terms of the contract; it’s not a referendum about whether we’re going to vaccinate anybody. We’re all in favor of that,” Primo said, noting that he hasn’t heard of other hub locations, such as Smith County, Dallas County or Harris County, having to pay hospitals to administer vaccines. “There’s different ways of going about it. My way was to include everybody. We are a two-hospital town, and I was told that the other hospital never had a chance to participate in this and they had no knowledge of this. That would be my objection, other than the financing of it. Why isn’t there a sharing agreement with both hospitals?”

CHRISTUS Good Shepherd Health System CEO Todd Hancock explained that CHRISTUS had applied to become a vaccine hub on its own and was rejected for hub status by the state. It was only after reaching out to and partnering with Gregg County and the city of Longview that CHRISTUS secured the hub designation.

Stoudt and Hancock each credit the face-to-face meetings with officials in Austin and the county’s commitment to funding the hub as the reasons the hub was approved.

“When we went down to make that presentation to the state, the state asked, ‘Are you willing to put money in this?’ I said, absolutely. I’ll have to go to Commissioners Court, but I will pledge to put money in this,” Stoudt recalled. “The state has budget constraints and cannot provide funding for all of this. It was the person-to-person meeting that helped us get the hub status. ... The only thing that changed about CHRISTUS getting the hub designation now was because the county was willing to partner with them, and we were willing to back it up with funding.”

Stoudt said Hancock approached him about working together to secure a hub designation, while Longview Regional didn’t. Stoudt also said he’d “heard” that Longview Regional “wasn’t interested in being part of a vaccine program.”

However, Longview Regional Medical Center interim CEO Mike Ellis said Thursday that isn’t the case. Ellis said Longview Regional was not approached to help administer vaccines as part of a hub for the county. He further said his hospital is interested in and is considering applying to become a vaccine hub.

“LRMC considers it an honor to be able to assist the county and our community in staying healthy against the pandemic,” Ellis said.

Ellis also noted that Longview Regional was the first hospital in the city to offer a free, public vaccination clinic.

On Jan. 8, Longview Regional partnered with the city of Longview and Gregg County to hold a vaccine clinic at the Longview Exhibit Center at the fairgrounds. About 600 people received shots that day. Ellis said, and Longview Regional did not collect insurance information from participants and that the clinic was completely free with no cost to the city or county.

The bottom line, Stoudt said, is that vaccines are coming to Gregg County and will begin being administered Saturday. On Monday, when CHRISTUS announced it had received a hub designation, more than 14,000 people signed up to receive vaccines in the first four weeks of the program.

“We’ve been playing defense for so long,” Stoudt said. “For the first time, we’re going to be on the offense. I look forward to Saturday when this program will begin.”

Christina Cavazos is a reporter for the Longview News-Journal, a member of M. Roberts Media group, along with the Kilgore News Herald and other area media outlets.

My doctor started me on  lasix and digoxin, the medications helped but not very much. My primary care doctor referred me to Herbal HealthPoint, i immediately started on their CH-D FORMULA. I had a total decline in major symptoms including angina, sob, fatigue and others. Go to ww w. herbalhealthpoint. c o.m... This herbal treatment protocol totally reversed my heart condition