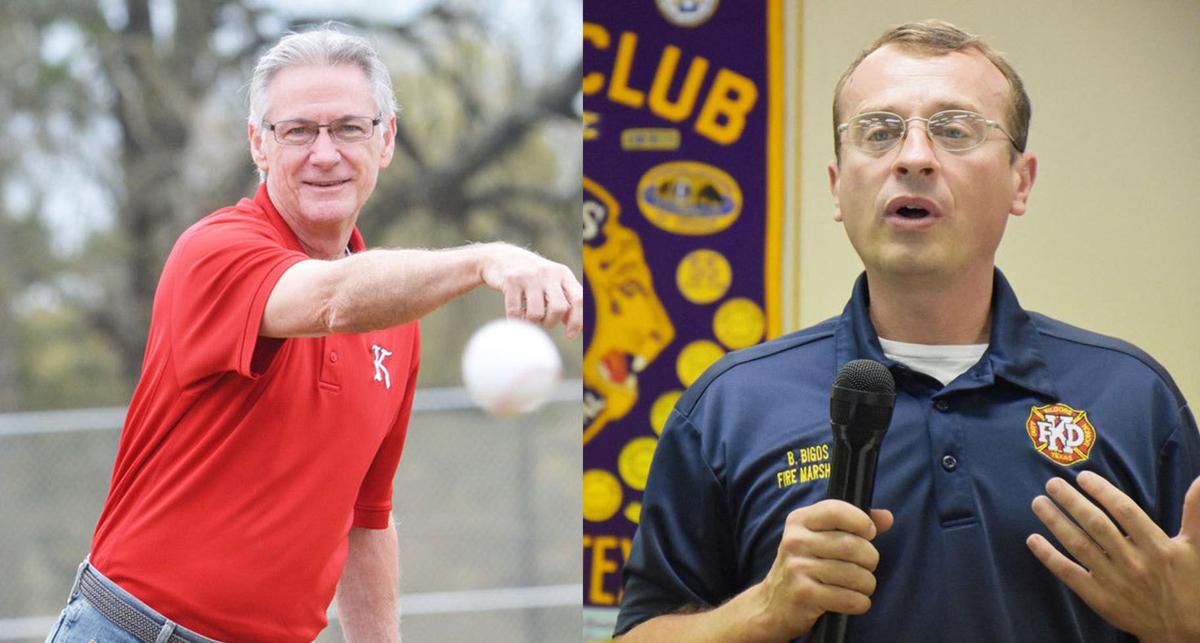 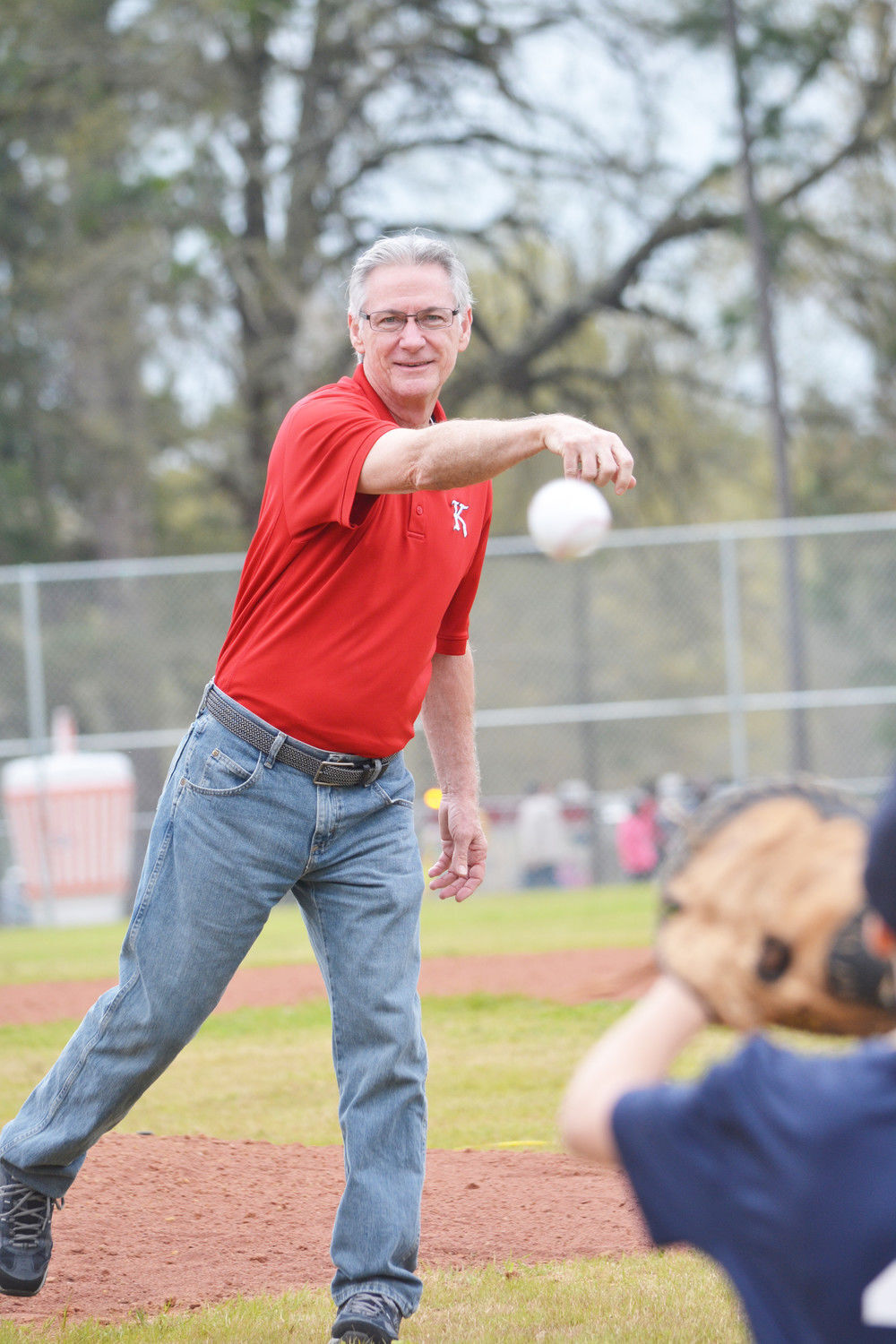 Mayor Pro Tem and City Councilman, Place 2, Harvey McClendon (seen here tossing out a pitch at the opening of the Whataburger Sports Complex) is seeking re-election to his council set. Having served on the council for 14 years, McClendon said he is running again to help continue work on many city projects the city has recently undertaken. 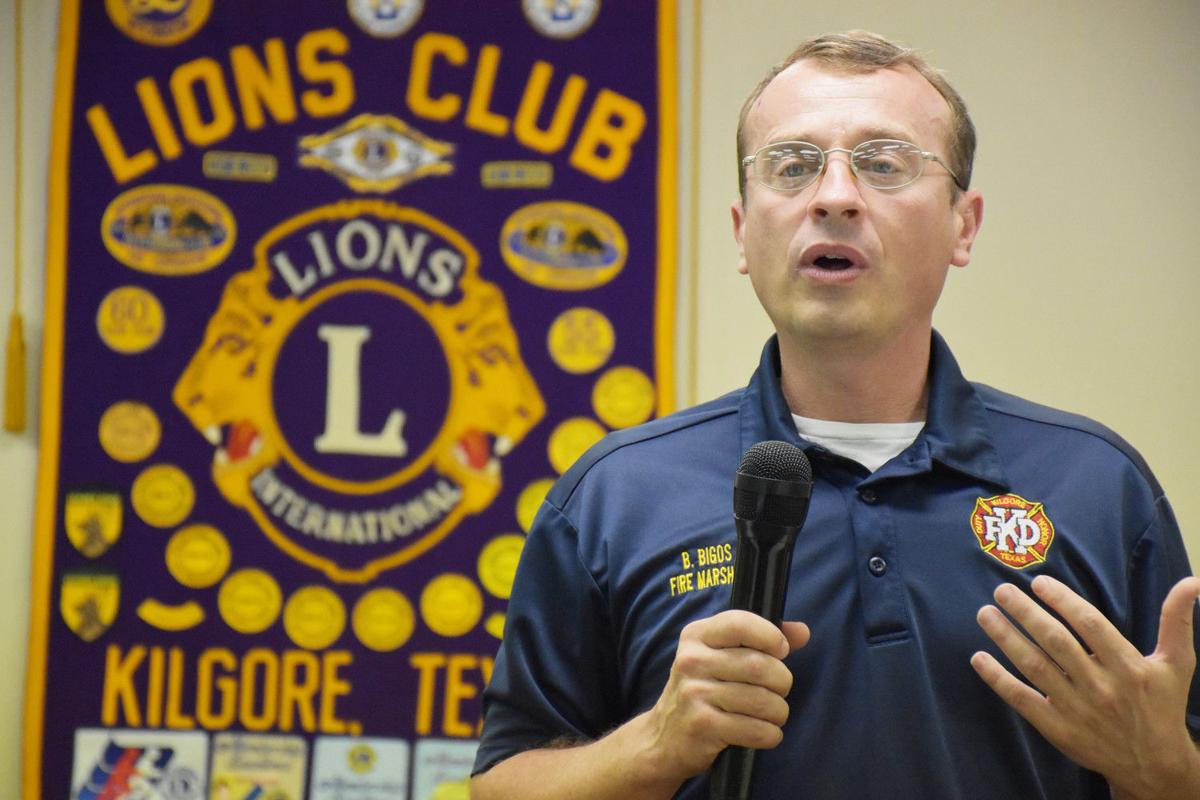 Former Kilgore Fire Marshal Brandon Bigos, seen here addressing Kilgore Lions Club, is seeking election to City Council Place 2 against incumbent Harvey McClendon. During his time working for the city, the Fire Marshal’s office and with Kilgore Fire Department, Bigos said he gained a unique insight into the goals and needs of city employees, as well as the citizens of Kilgore, and pledges to represent their best interests if elected.

Mayor Pro Tem and City Councilman, Place 2, Harvey McClendon (seen here tossing out a pitch at the opening of the Whataburger Sports Complex) is seeking re-election to his council set. Having served on the council for 14 years, McClendon said he is running again to help continue work on many city projects the city has recently undertaken.

Kilgore residents have one last chance to vote in the City Council elections.

There is one contested race in the May 1 election for Kilgore City Council: Place 2. There are two candidates in this race, with the incumbent Harvey McClendon seeking re-election and former Fire Marshal Brandon Bigos seeking election to council.

Mayor Ronnie Spradlin was also up for re-election and is running unopposed.

McClendon, who serves as Mayor Pro Tem in addition to his Place 2 seat, has been on the council for 14 years. As a local business owner, he said he decided to run for re-election upon seeing the many projects laid out for Kilgore in the coming years.

“We’ve got some significant projects we’re working on. I want to be sure they get completed since I’ve been involved in those,” he said.

He also referred to ongoing work in Kilgore’s downtown core, with extensive plans to promote business development there, as well as plans to improve roadways downtown and throughout the city.

“The new one we’ve got the is the utilities and the construction at the circle at Houston Street and Highway 135. It will probably be a two-year project. That’s something we’ve been trying to get done for many years,” he said.

Additionally, the Kilgore City Council has recently finalized and approved its 2030 Comprehensive Plan, which includes years’ worth of projects. Of course, there are also the day-to-day tasks which come with a seat on the council.

“I’ve got a lot of experience with that in the 14 years,” he said. It would be good just to have some continuity on the council. We’ve got some new members, and I agreed to stay on if I’m re-elected.”

McClendon describes himself as fiscally conservative, a trait which will serve the council well, he says, as they face a tough budget year ahead as the city is still dealing with the effects of the COVID-19 pandemic and the loss of major local employer Halliburton.

“With everything going on, we’ll get pretty much back to normal hopefully this year,” he said. “We’re really going to have to ride out this year financially, and we’ve taken a hit with Halliburton leaving the tax base and some of the oilfield down-turn. Coming back hopefully won’t be too onerous on us. We’ve got a great staff now and we just can keep moving forward and take things as they come.”

As Fire Marshal, he not only inspected buildings in the city to make sure they were up to codes and standards, he also served in a law enforcement role, investigating fires and even earning a Medal of Valor in 2015, KFD’s highest honor, for life-saving actions in the line of duty.

If elected, he says he’ll work to improve essential services, including water service and roads, in the city.

“One of the things that I’ve seen in the past is infrastructure, primarily water and roads,” he said. “I think that pretty much my goal is to facilitate taking better care of and improving and repairing our infrastructure.”

“He also anticipates challenges for the city in the year ahead and lists supporting the local tax base as a priority.

“I think that there’s going to be some challenges with the tax base,” he said.

As qualifications, Bigos cited his decades of service to the city and his local community.

“I’ve always served the community in Kilgore all of my adult life,” he said. “I’m a retired firefighter from the city, and I know how the inner parts of the city work. I know that sometimes when council sets down policy and things like that, how it personally affects the employees and how they feel. Kilgore has a great bunch of employees, they go way above and beyond what they’re required to do, from the streets department to the water department, the police department, and I’ve been personally a part of that.”

During his time working for the city, the Fire Marshal’s office and with the Kilgore Fire Department, Bigos said he gained a unique insight into the goals and needs of city employees, as well as the citizens of Kilgore.

“I see where sometimes that if you’re on the council, council members may not have an insight like I would, how it affects the employees. I think that is a benefit to the city and employees and that goes to insurance, pay raises and things like that.”

“If elected, Bigos pledges to commit hard work and perseverance to his role on the council.

“I’m a go-getter. I’ve never been idle. I’m always one that will pick up that can instead of kicking it down the road.”