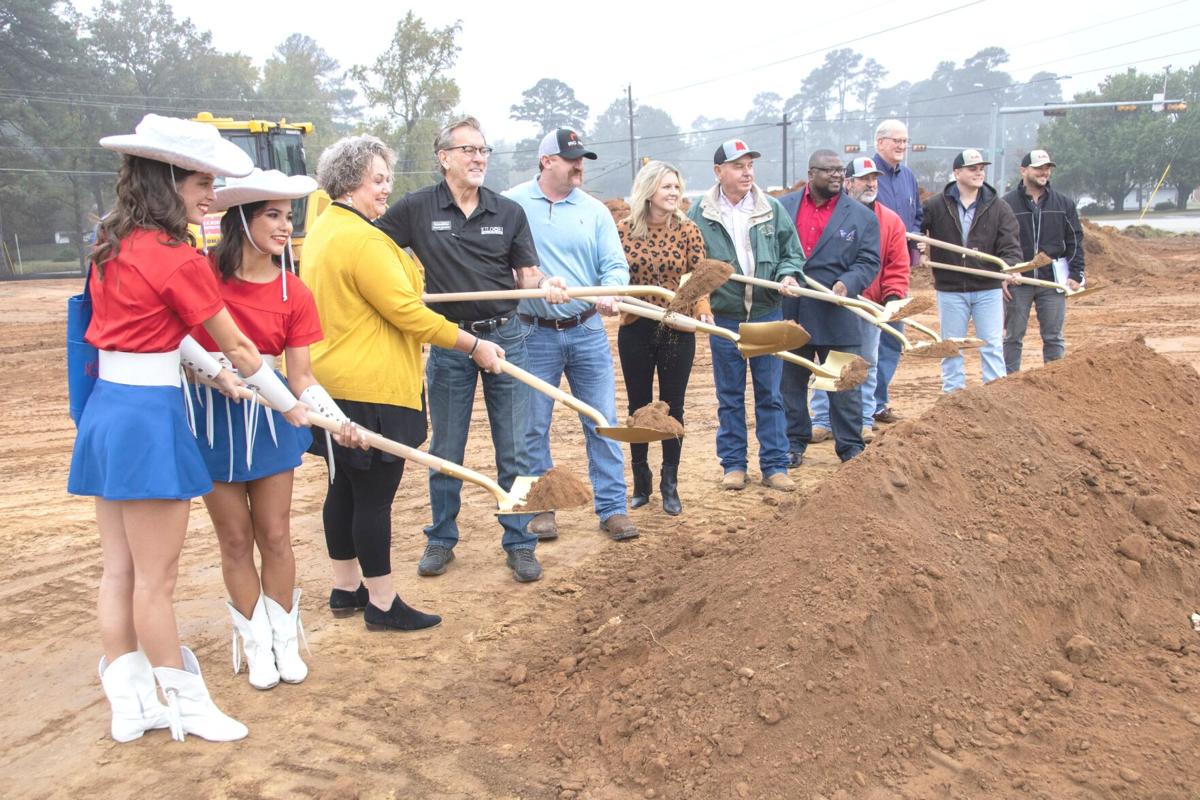 Members of the Kilgore College Rangerettes, Kilgore Area Chamber of Commerce President / CEO Jill McCartney, Mayor Ronnie Spradlin, Kenny Mobbs of K-K Mobbs Construction, and other city officials were on hand Tuesday morning at Lantrip Street and Highway 259 for a groundbreaking ceremony of a new Dairy Queen here, with a one-of-a-kind design.

Members of the Kilgore College Rangerettes, Kilgore Area Chamber of Commerce President / CEO Jill McCartney, Mayor Ronnie Spradlin, Kenny Mobbs of K-K Mobbs Construction, and other city officials were on hand Tuesday morning at Lantrip Street and Highway 259 for a groundbreaking ceremony of a new Dairy Queen here, with a one-of-a-kind design.

Kilgoreites have been patiently awaiting progress (and the promise of Blizzards and steak finger baskets) on a new Dairy Queen location at Lantrip Street and Highway 259 and, Tuesday morning, the project took a big step forward.

DQ representatives, Kilgore city councilmembers and K-K Mobbs Construction members turned up to the location at 600 N. Henderson Boulevard (259) on a misty morning for a groundbreaking ceremony. Two Kilgore College Rangerettes were also at the scene to hoist gold-plated shovels, marking the beginning of the long-awaited construction project.

Ashley Gary, Director of Operations for Hometown Restaurant Group, said the new DQ will be one-of-a-kind in the Lone Star State.

“We are thrilled that we have the opportunity to be part of the Kilgore community. We have been preparing for months to make this one of our greatest stores yet. The new Kilgore location will feature the new Dairy Queen building concept, giving an updated and modern look to the well-known Dairy Queen brand. This store will actually be one of three stores in the United States that will be showcasing our new look and the only store in the state of Texas when it is completed,” she said via email prior to the event.

At the groundbreaking, Gary said the long-awaited construction project would make a unique addition to Kilgore.

Hometown Restaurant Group, based in Lindale, has also opened DQs in Athens, Chandler, Chapel Hill, Cleburne and other Texas locations.

The new design, as well as heavy rains last year, were responsible for some project delays. Residents on Lantrip Street complained about the long delays, which shut down part of the street for months. However, as K-K Mobbs Construction prepares to carry out the building phase of the project, Kilgoreites can finally breathe a sigh of relief (and maybe feel a few hunger pangs) as they watch the project unfold.

Kilgore Mayor Ronnie Spradlin, also on hand for the groundbreaking, joked that he’d gotten a phone call from the mayor of Henderson, which reportedly boasts the oldest DQ in the state. Spradlin countered by noting Kilgore would be home to the newest in the state, as well as the only one in Texas to feature the new design, and said he was happy to claim that honor for the city.