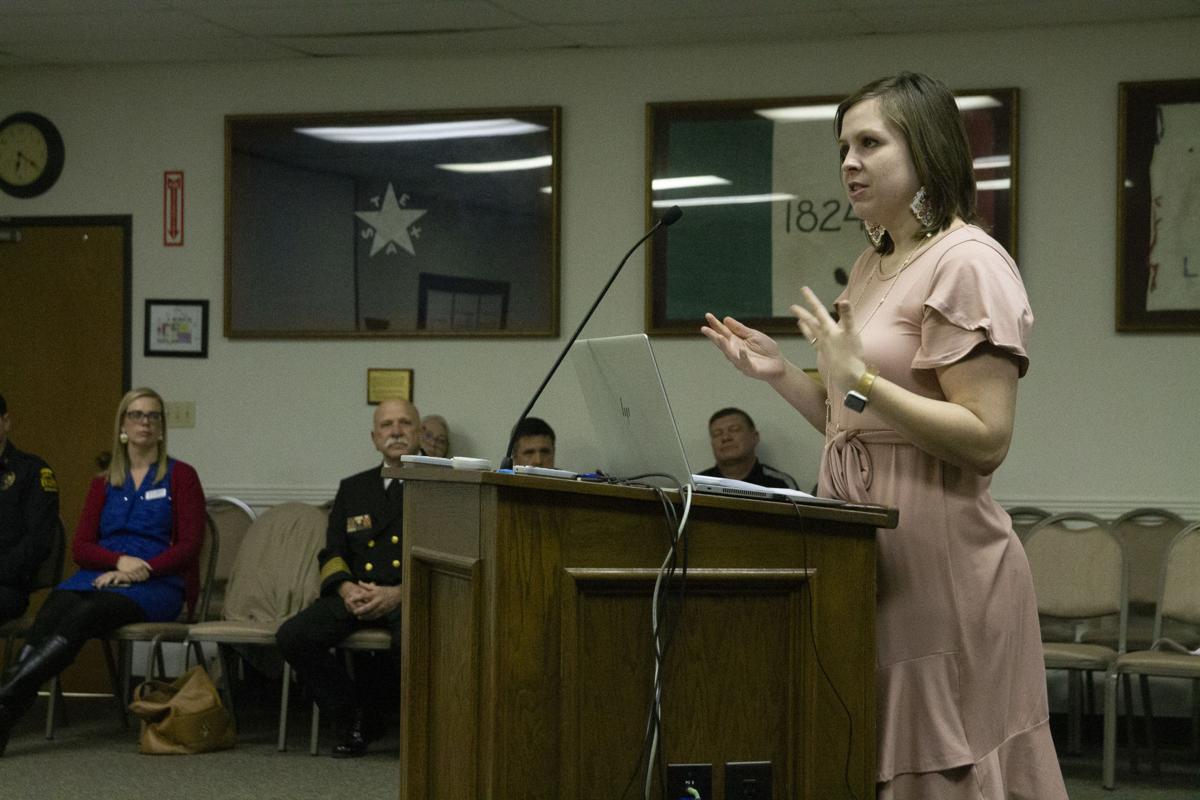 Kilgore Public Library Director Stacey Cole speaks to Kilgore City Council about using E-Rate funds from the Federal Communications Commission to improve internet service at the library for staff and patrons. The council voted unanimously to approve the motion, which partners the library with Longview/Kilgore Cable for the planned improvments. 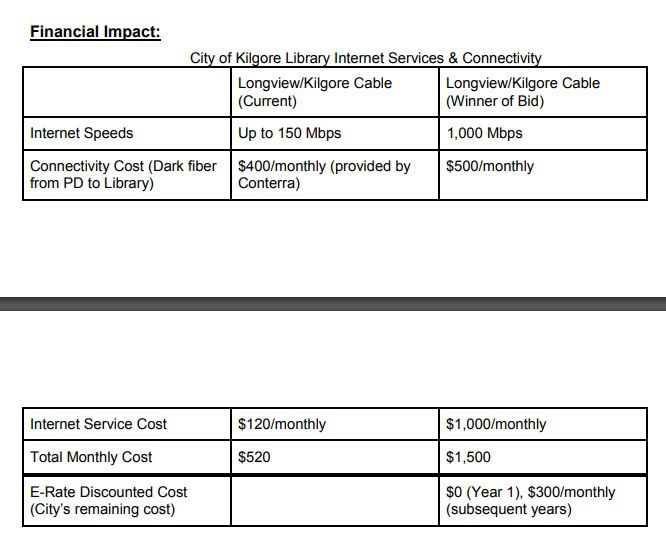 The partnership with Longview/Kilgore Cable, funded by E-Rate funds from the FCC, is projected to significantly boost internet connection speeds and reliability at Kilgore Public Library while also generating cost savings, shown here.

Kilgore Public Library Director Stacey Cole speaks to Kilgore City Council about using E-Rate funds from the Federal Communications Commission to improve internet service at the library for staff and patrons. The council voted unanimously to approve the motion, which partners the library with Longview/Kilgore Cable for the planned improvments.

The partnership with Longview/Kilgore Cable, funded by E-Rate funds from the FCC, is projected to significantly boost internet connection speeds and reliability at Kilgore Public Library while also generating cost savings, shown here.

Kilgore City Council voted to approve the use of federal funds to improve and upgrade internet service at Kilgore Public Library during their regular meeting Tuesday, Jan. 28.

KPL Director Stacey Cole addressed the council about the use of federal funds for the library upgrades.

“Earlier this year, we spoke about pursuing some of the funding provided by the Federal Communication Commission and the Texas State Libraries & Archives Commission to help improve our internet services and save some money,” Cole said.

The federal funds are available to KPL through the FCC’s E-Rate program.

Cole noted she, KPL staff and IT staff from Longview teamed up to create a committee and search for bids from local companies to carry out the upgrades.

“We put our proposal out for bids. We received three bids back. Within our committee, we rated those bids that we received on several things, compared them on cost, their compatibility with our network, their meeting and understanding of what we needed and compliance to specifications and any experience that we had with the vendor.”

Cole offered the council a recommendation based on the decision reached by the committee.

“After we met and we rated all the bids that we received, we’re recommending to move forward with Longview/Kilgore Cable. They provided the best bid based on our rating system and the discussions that we had and all of our concerns were met. We have put the contracts up for review by our city attorney so we still haven’t finalized the contract but we just wanted to give you an update and recommend that we keep pursuing this to help improve our internet service and save some money,” she said.

The agenda packet for the council meeting contained additional information about the proposal.

“As a reminder, Public Libraries have access to grant funding provided by the FCC and TSLAC (Texas State Libraries & Archives Commission) called E-Rate. The E-Rate program provides discounts to schools and libraries for eligible products and services.

In January of 2020, 3 bids were received for the City of Kilgore’s request for proposals to provide internet services. In addition, the proposals received replace the current dark fiber connectivity between the Police Department and the Library. These bids were compared and rated on price, compatibility with existing network, meets/understands our needs, compliance to specifications and vendor experience.

The outcome creates an improved service experience for library patrons with internet speeds almost 10 times (that of) current speeds. This second high speed internet connection at the Police Department also allows for internet failover for the rest of the City Hall complex. This improves reliability for all City businesses.

We are recommending Longview/Kilgore Cable as the bid winner. These services will be 100% paid by E-Rate in 2020 and in the subsequent years will be 80% covered by E-Rate. Year one savings over current costs are $6,240. Year two and beyond savings are $2,640 annually,” the packet read.

Mayor Ronnie Spradlin asked Cole if the internet improvements would benefit only library patrons using KPL computers or if it would also benefit KPL employees, as well.

“(It will improve) everything, which we need,” Cole said.

Justin Cure, Director of Information Services for the City of Longview, also spoke at the meeting to address questions posed by council members.

Council member Merlyn Holmes asked if the services provided by Longview/Kilgore Cable were examined for reliability and consistent internet connectivity.

“It’s one of the things that this is going to provide, is that you will actually have redundant high-speed internet now, not only through City Hall but also the library and police department, as well. If our current provider for City Hall happens to fail, we can fail over to this internet connection as well so you’re actually improving reliability by implementing this second internet provider.”